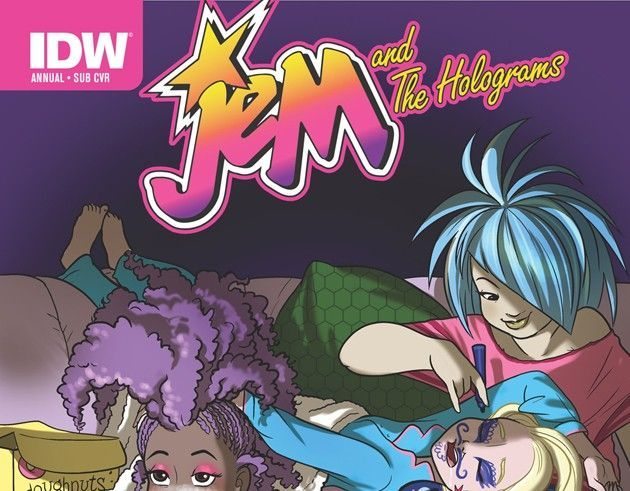 After another amazing show, Jem and the Holograms are all too excited to sleep and there is only thing to do…sleepover! How do you pick one movie when each band mate is so different?

I’ll admit, I was a bit wary when the Jem and The Holograms Outrageous Annual was originally solicited. In all of my eight years of reading comics I have never seen an annual with a $7.99 cover price, but let me reassure you, this annual is a graphic novel-sized issue and it is worth every penny.

After coming home from another show, Jerrica, Kimber, Shana, and Aja are too excited to go to sleep and decide the best way to stay awake is to have a sleepover. With Synergy’s access to every movie in existence, the ladies have trouble choosing a movie based on their individual differences. After finally choosing a movie, Jem and the Holograms fall asleep and what follows is an interesting take on dream sequences that perfectly fits the vibe of the comic. 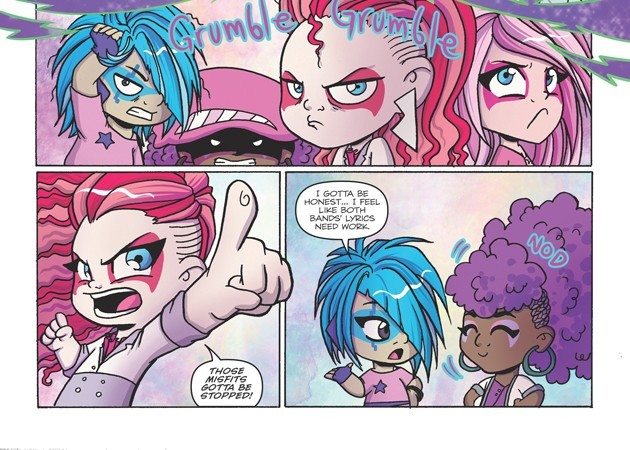 With the first arc of the series, ‘SHOWTIME!’, focusing on the development of the band and their clash with rival band, the Misfits, the annual slowed things down to focus on the subconscious fears and dreams of each member of Jem and the Holograms. By placing each girl in a movie-related dream, the creative team gets the chance to focus on each member individually in a way that the monthly series just doesn’t have time for.

Jerrica’s Teen Wolf dream, featuring the art of Arielle Jovellanos, used a transformation that represented her fear of the world desiring more of Jem and forgetting about the person underneath . In a Mad Max: Thunderdome throwback, we get to see Aja battle herself in a Hell in a Cell-style match; a nod to the clash between her desire for a solitary lifestyle and her love for her sisters beautifully rendered by Rebekah Isaacs. We then get to see Shana in a wonderful, Star Wars sequence drawn by Jen Bartels where the readers get a bit of foreshadowing. Shana may soon have to make a choice: the band or a career in fashion. Finally, Kimber’s adorable Muppet Babies dream put a spotlight on her growing, complicated love for Misfit’s member, Stormer. This dream sequence was drawn by Agnes Grabowski, whose Jem Babies style was popularized in a variant cover for the first issue of the series. I’d also like to point out Amy Mebberson’s work for the sleepover story, which to me, looked exactly like a modernized storyboard for a Jem and the Holograms cartoon and was just delightful. 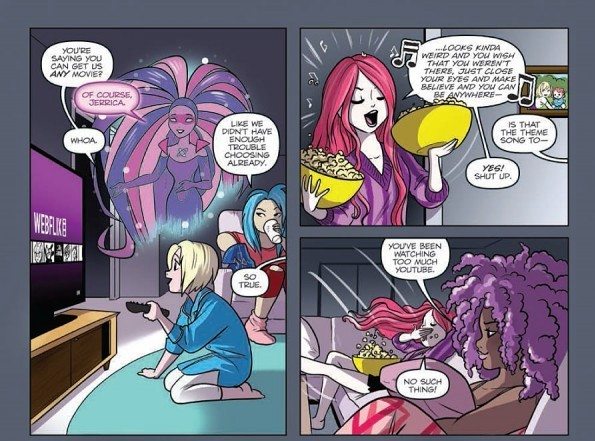 For me, this annual was really special because it felt like a brief pause in the ongoing series to offer up some character development; something I think has been sorely needed with Shana specifically. The nods to classic movies (well, a television show for Kimber) were also a great touch; with each one being from the same era as the original Jem and the Holograms cartoon. The throwbacks were great and each guest artist’s style coincided not only with the movie parody but also the personality of the band member the story spotlighted. Isaacs’ Mad Max dream was particularly gorgeous and she managed to make each character look like they were pulled directly from the franchise. While I’m not usually a fan of the chibi art style, I have to admit, I was a big fan of Garbowska’s Jem and The Holograms Babies adaption. I thought it perfectly represented what life would be like in Kimber’s head.

While Sophie Campbell is missed after her work on the first six issues from the title (she’ll return on issue 11!), I am always glad for another issue of Jem and the Holograms and I can’t wait to see what Kelly Thompson and Emma Vieceli have in-store for us next month!