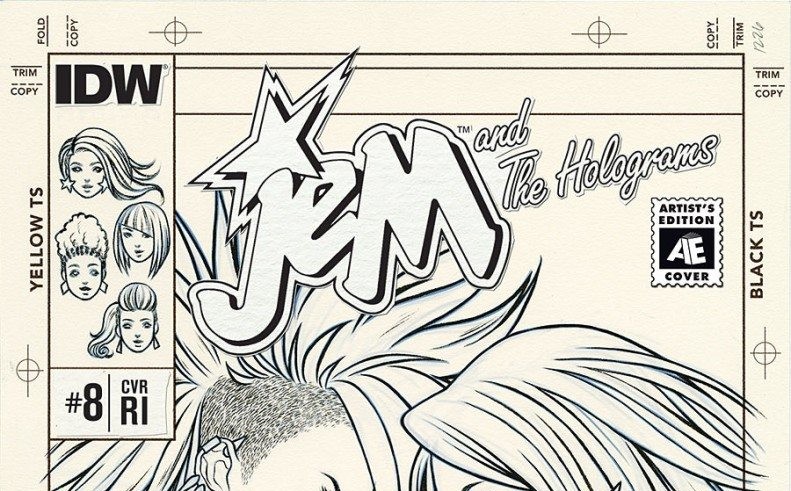 JEM AND THE HOLOGRAMS #8 is an issue that focuses on good news and bad news for the band. While the girls successfully film a new video for their single, Laser Beam, and sign contracts to their new label, FivebyFive Records, trouble is brewing. The girls’ individual desires and goals are beginning to cause tension and Jerrica is tasked with all of the responsibility. Are we seeing a preview of things to come for “Dark Jem”? Was Pizzazz of The Misfits being kind? What are you waiting for? Let’s get this review started!

JEM AND THE HOLOGRAMS #8 by KELLY THOMPSON AND EMMA VIECELI

There’s always something special when JEM AND THE HOLOGRAMS opens with a music video. I’ve never read a comic that uses music videos as a narrative device until Jem and I just love it. Fanboy aside, this issue put a focus on both the Misfits and the Holograms. For the Misfits, there is a shocking moment of kindness shared between Pizzazz and Stormer over the latter’s failed relationship with Kimber. It’s great to see that Kelly Thompson is using this opportunity to flesh out the character and not make her a crazed, one-note villain. Though, of course, the Misfits have to crash the Jem and the Holograms’ house party in the next issue because they are villains. Extremely likable villains but villains, nonetheless! 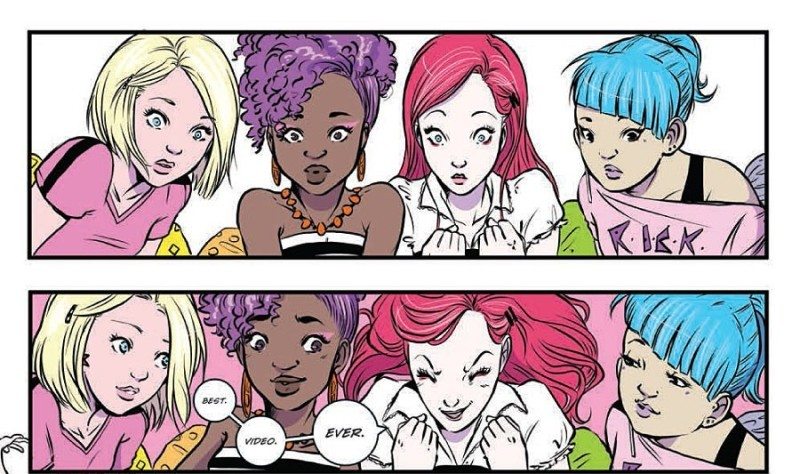 The Jem and Holograms problems in this issue stem from the group’s inability to function as a band off of the stage. Fresh from the heartbreak of her breakup with Stormer, Kimber is as flighty as ever. While that characteristic was enjoyable last arc due to her emotional growth, she is very self-consumed in this issue and it’s frustrating to read. This isn’t to say the other girls are faultless, Shana is in classes and dealing with her upcoming decision of leaving the band and Aja’s loner mentality and budding relationship have them both busy as well. Jerrica is taking the brunt of all of this, having to meet with the record label on her own and setting up their video release party. Her brief freak out was a solid reminder than Jerrica is still dealing with her identity issues and the building of stress doesn’t help. We’re looking at what’s beginning to look like a huge band conflict coming up and after the NYCC 2015 announcement of the “Dark Jem” storyline starting in issue 11, I’m very worried to see what is going to be happening with my favorite band in comics.

READ: Check Out Our Last JEM AND THE HOLOGRAMS Review!

All in all, this issue was as solid as it is every month. Kelly Thompson’s flawless understanding of these characters has led to some great character development for not only Jem and The Holograms but the sid characters, as well. There was a brief confusion for me in the beginning of the issue, who is Syner-kitty? Did I miss something or was it just a poorly-handled joke? Either way, I laughed when Pizzazz commented on the craziness of the character’s names when she hears that Clash’s cousin’s name is Video. I am sort of nervous as to what will happen to the band in the next issue with the growing tension in the band and a possible Synergy hack by Tech Rat. Last arc was all about the glamour and glitz of Jem and The Holograms but this issue is a sign that they’re not in Kansas anymore.

LISTEN: Check Out the Original Jem and The Holograms Theme Song!

Emma Vieceli’s pencils are an absolute pleasure in this issue. Her pencils are very animated and keeps this book moving. With a passive character like Tech Rat, she manages to bring him alive in emotional responses and body movements that are hysterical. Her style very much reminds me of the manga I used to read in high school and it’s working so well in this series. My favorite part of the book though? M. Victoria Robado’s colors. The book’s use of heavy pinks during the music video scene gets the reader’s attention in the beginning but the consistent use of a neon rainbow color palette throughout the rest of the issue makes the pages pop and it is just gorgeous. 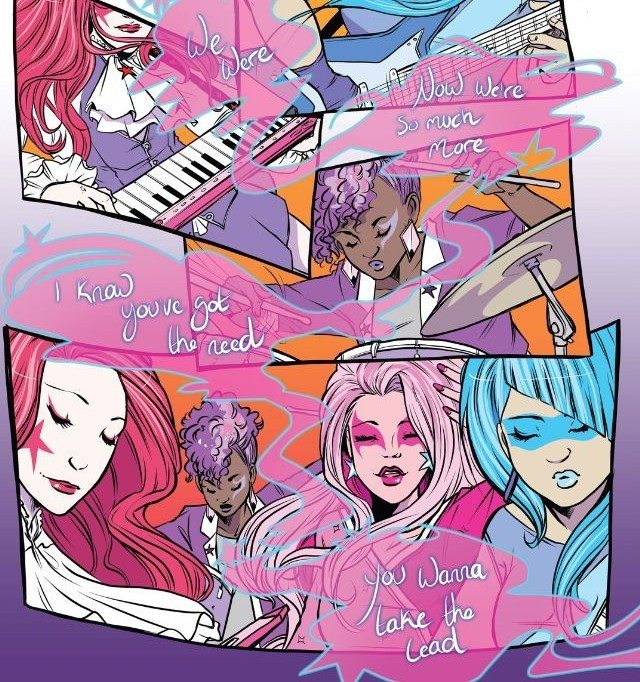 I can’t say it enough how much it means to me to see this book on the rack at my local comic book shop. The story that Kelly Thompson and Sophie Campbell have developed in this comic book adaptation of the 80s animated television series is captivating for so many reasons. Beyond books like A-FORCE, LUMBERJANES, and ZODIAC STARFORCE, there are too few comic books that feature authentic female friendships as the series’ major focus. Jem and the Holograms has the most natural bond of sisterhood that I’ve encountered in the comic book medium, possibly the only comic book I’ve ever read with a positive sisterly relationship. It is a comic for all ages and all genders; it deserves to be read and appreciated by everyone and it should be.

As mentioned earlier, I’m pretty nervous about the NYCC 2015 announcement of the “Dark Jem” storyline but I mean, Sophie Campbell drawing punk and goth girls? Sold! I’ll see you guys next month for my review of JEM AND THE HOLOGRAM #9. Stay fabulous.

WATCH: Check Out The JEM AND THE HOLOGRAMS Movie Trailer!