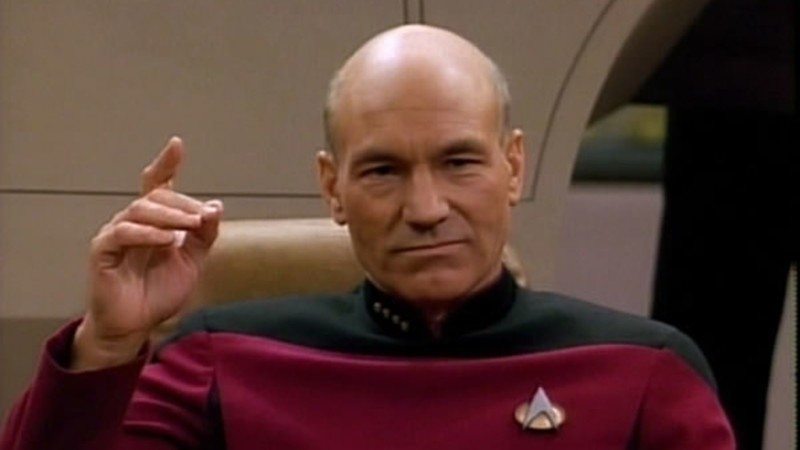 Throughout its fifty years as a staple of pop culture, there lies one core, unyielding theme at the center of STAR TREK — humanity. Each entry in the franchise adds another chapter into what humanity can accomplish when we put all of our petty grievances and prejudices aside. Star Fleet and the United Federation of Planets represent this future: a utopian government based on the principles of equality, freedom, and liberty, not designed for conquest but, rather, exploration and diplomacy.  The vision of a utopian future for humanity represents prominently in Jean-Luc Picard, captain of the Enterprise-D.

Smart, diplomatic, and unquestionably moral, Jean-Luc Picard represents the intellectual evolution of man towards a wiser, more philosophical perspective. He represents the capability of humanity as a force for good rather than destruction. He acts as something of a foil for the more brawny James T. Kirk. Kirk appears more like a negotiator who prefers to solve problems through words and diplomacy rather than physical action.

This preference of brain over brawn in Picard’s character symbolizes humanity’s rejection of force and hostility for a more levelheaded and logical approach: talking with one another. He respects new cultures that he and his crew encounter. He recognizes the necessity of working together for future goals that benefit both sides. It is the marking of a well-respected leader. In addition, it also acknowledges and encourages of individuality. Individuality as a trait that makes us stand out as human beings often reoccurs as a motif in STAR TREK. 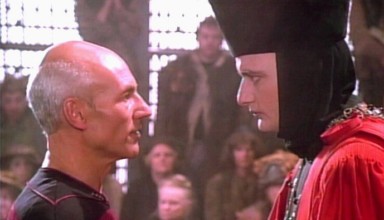 Jean-Luc Picard: The Next Generation, Literally

In the series’ pilot episode ENCOUNTER AT FARPOINT, Jean-Luc Picard represents a new generation of humanity. This representation exists mainly through his placement on trial for the sins of the old humanity. With the introduction of the omnipotent Q, Picard faced off against a god-being singling out Picard and his crew for a simple test. The test sought to discover if humanity had changed from its more violent ways. Q’s reasoning that he considers humanity a “grievously savage race,” even after years of progression, speaks to us today as a species.

Such matters should not be treated with hostility and refusal for change. Ignorance and hatred only hinder our progression as a species rather than enhance it. It is these modern-day issues that the world of STAR TREK manages to overcome. STAR TREK shows that humanity CAN overcome its dark past to create a better tomorrow.

The pilot episode does an adequate job at showing the evolution of humanity from its rather savage days. However, not until the Season 2 episode THE MEASURE OF A MAN that NEXT GENERATION did it began to feel like classic STAR TREK. Lieutenant Commander Data is ordered to be dismantled for scientific research in the hopes of manufacturing more of him. The orders result from the belief Data exists as the property of Starfleet. The orders say Data does not have legal rights of his own. This leads to Jean-Luc Picard requesting a formal hearing to overturn the decision, making a case that Data possesses the traits necessary to define an emotional sentient lifeform.

Reflecting the charges that Q made back in the pilot, THE MEASURE OF A MAN compares the treatment of Data and his possible replication to that of slavery. It instantly becomes clear how such a decision goes against the ideals that founded Starfleet.

THE MEASURE OF A MAN asks the ambiguous question of what it means to be human. It also discusses themes that can not be answered in a straightforward manner. Commander Maddox’s desire to replicate Data does not operate out of malice or hostility. Instead, it derives itself from wonder and respect.

Regardless of intentions, to do so without Data’s compliance under the guise that he has no rights to say otherwise, as Jean-Luc Picard points out, evidently enslaves Data against his will. Should more of him be made, will they be regarded as property, a group of expendables that Starfleet can exploit and dispose of without a second thought? Picard recognizes the moral consequences of such a decision, stating that the decision they make here will not only determine Data’s fate as a being but the fate all other life forms that Starfleet encounters from this point forward.

From this speech, we can regard Picard as a man who recognizes the existence of injustice. Additionally, he also realizes the steps that can lead up to the performance of injustice. He knows that if humanity thrives and becomes better, no excuse to exclude or deny a sentient being their rights can exist. It doesn’t matter what technological or political benefits it might hold for mankind.

Jean-Luc Picard and the Borg Takeover

If Jean-Luc Picard and his crew represent humanity’s evolution as a species in regards to acceptance and cultural diversity, then the Borg serve as humanity’s antithesis. A race of cybernetic hive-minded beings, the Borg are a collective that also wishes to unify the universe and create peace. However, where humanity in the STAR TREK world sees unification only occurring through the acceptance of one another’s differences, the Borg seek unity by assimilating the native population into their collective. The same Borg implants and mindset that outfit people, turn them into drones. These drones feel linked to one another yet sapped of their free will and individuality.

The Borg see individuality as a weakness. To the Borg, individuality prevents perfection from existing in the universe. Only by having other cultures assimilate into the hive can they become perfect. These actions draw parallels to themes of imperialism and neo-liberalism. Both systems focus on the consumption and assimilation of foreign nations into what was essentially the perfect means of living one’s life. Culture and individuality get stripped away until all that just another group added to the collective remains. The smaller group must alter their lifestyles to fit the needs of the dominant group. The Borg serve as a disturbing vision for what the future of humanity could become. The warn us of the dangers of integrating everything and anyone in a quest for intergalactic purity. “Resistance is futile,” indeed.

READ: STAR TREK has had a tremendous impact in the rise of fandoms. Read more about it here!

Jean-Luc Picard Represents Everything The Borg Do Not

Jean-Luc Picard and the Enterprise represent the utopian depiction of humanity. The Borg, acting as a representation of the collectivist/imperialist society, once took part in it. It was inevitable the two sides would clash. The two-part episode THE BEST OF BOTH WORLDS, considered by many to be the best episode in the series, was this clash. It pitted the woefully unprepared Starfleet against an enemy that could not be reasoned with whatsoever. But more importantly, this episode had the greatest impact on Picard as a character, the events of this storyline forever haunting him from this moment forward. Eventually, Picard himself assimilates into a Borg known as Locutus (Latin for speaker), effectively providing the Borg with the information necessary to assimilate Earth itself. 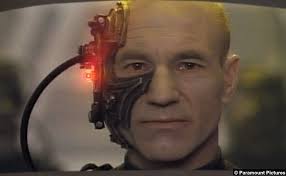 This conversion of Picard symbolizes the threat of humanity stripped of its individuality; the utopian perspective of what mankind should be turned on its head. This is noted by the scene in which Jean-Luc Picard is being fitted with Borg implants. He gradually becomes less like a man — an individual — and more like Borg. Even the “name” given to him — Locutus — signifies less of an identity than it does a mere function. The function of speaking on behalf of the Borg as a whole. In other words, Locutus reflects humanity’s fate and the vision it has struggled to strive towards if the Borg succeed.

Jean-Luc Picard Out Individualizes the Borg

Eventually, the crew of the Enterprise manages to successfully rescue Jean-Luc Picard. They detach him from the Borg, a process that could be interpreted by some as a show of the Captain’s will. Despite no one ever wanting to become a member of the Borg, it is rare to see an assimilated individual show a desire to regain their individuality after being inducted into the collective. You have to desperately want to break free of such a state, so one could see Picard’s de-Borgification as a thematic depiction of the individual proving himself triumphant over his collectivist counterpart.

However, despite being freed, the memories of what he did under their control still haunt him and would continue to do so until the very end. There is nothing that he can do to stop his assimilation, but he still feels guilty, confessing to his brother in the episode FAMILY that “[he] wasn’t good enough.” In this scene, Picard experiences and copes with a response that the Borg could never fully comprehend: failure.

READ: Love the STAR TREK films? Check out Part One of our ranking of their films here.

Perfection is not Perfect

Failure is something everyone goes through. Perfection as an idea human beings already attain is absurd. More importantly, it is necessary for us to accept that failure. Subsequently, moving on in spite of it makes us fundamentally human. Despite the progress achieved by humanity as a species, Picard, like everyone else, does not claim perfection. He makes mistakes and even succumbs to mistakes made beyond his control, and he owns it.

The Borg see themselves as universal perfection and want to spread this perfection with the world. In contrast, Picard does not reject his flaws. First, he accepts them. Then he goes back to his position as Captain of the Starship Enterprise. He goes back to his crew and family. Despite all of his human flaws, Jean-Luc Picard is responsible. He keeps the peace between the Federation and its enemies. In the end, he is only human.

Jean-Luc Picard by no means represents a perfect human being. However, his moral compass and beliefs regarding humanity and the future make him a physical representation of humankind’s utopian future. Kirk embodied the brawn of the STAR TREK world. Picard embodies the brain. He prefers to play the role of negotiator rather than fight. Jean-Luc Picard is a man of authority. Picard fights against all forms of injustice. He explores the cosmos not for conquest, but for greater knowledge of the unknown. Picard might be a cunning tactician and fighter, but more importantly Picard is a diplomat. He wishes to form alliances with new life and civilizations to make the universe a better place. That is a leader whom I would not have any trouble following.