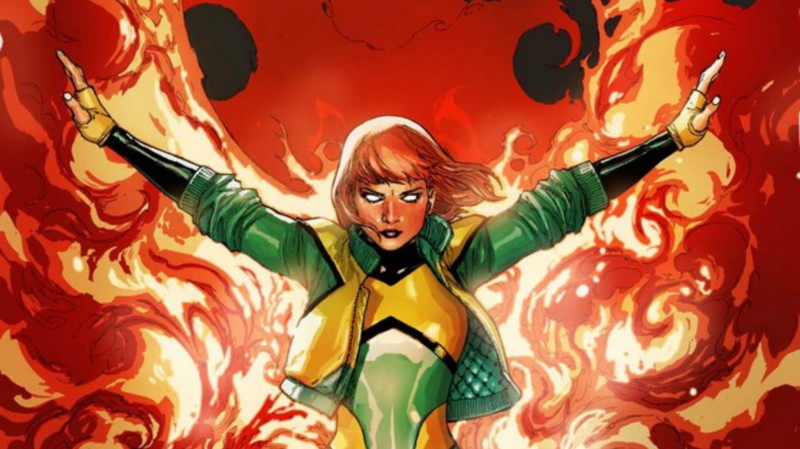 After the first issue of JEAN GREY — the new solo series for our favorite redhead — I was hopeful but nervous. Often, first issues are great but quickly lose their thrill. I can say with absolute certainty that this is not the case for JEAN GREY #2. Dennis Hopeless writes another compelling expansion in Jean’s story and nails it. It’s gorgeous, action-packed, and innovative. It reminded me why I love comic books so much. I’m overjoyed to see one of my favorite characters receive such an all-around excellent treatment. This series should become a model for solo comics for years to come.

More of the Past Comes to Focus in JEAN GREY #2

In JEAN GREY #2, we begin right where we left off last issue. Jean’s stress is off the charts because the Phoenix Force has contacted her. And not in the nicest way, either. Understandably, she calls on a council of her friends for advice. (Which apparently includes Carol Danvers, a.k.a. Captain Marvel! Cross-team female friendships make me tear up.) However, because the Phoenix Force doesn’t show up anywhere near Earth on the X-Men’s radar, her peers dismiss Jean’s worries. There’s a great beat where Jean throws an amazing I’m-so-annoyed face at Beast after he effectively mansplains the Phoenix to her (see the image below). It’s the little moments like these that cement Jean as a real girl. There’s not an instant where she doesn’t feel palpable.

Not finding satisfying answers from her friends, she seeks advice from people who would know the most: those that have bonded with the Phoenix before. Using Cerebro, she locates Quentin Quire, Rachel Summers, Hope Summers, Colossus, and Magik. From there, we see how greatly the Phoenix Force’s power truly is. We see the lingering effects it still has on its previous hosts, and the horror it brings Jean to know it still wants her.

READ: Missed the first issue? Check out our review of JEAN GREY #1!

Regardless of the heavy topic (the Phoenix is a genocidal maniac, after all), JEAN GREY #2 manages to keep things light and fun. For example, Jean remarks that “they named a whole saga after my crazy.” The cute fan-service there made smile. It’s exactly what we need when surrounded by gritty noir superheroes. Though Jean’s stakes are high, her spirit prevails, still letting her be a teenage girl despite all the drama. It’s truly heartwarming to watch her on the page. She is strong, yet not hardened by all she’s seen.

In addition, the fundamentals of the comic are fantastic. The nuanced plot and interesting dialogue are wonderful, of course, but those could exist in a novel. What makes JEAN GREY #2 stand out is its use of art and specifically, the panel structure. Looking at just the art, Victor Ibanez renders Jean in a way that makes her somehow look innocent and strong all at once. Colorists Jay David Ramos and Chris Sotomayor add gorgeous colors that make an adventurous atmosphere for every artful scene.

But beyond his artistic talent, he creates the scenes in a way that utilizes the medium to its full extent. This issue is a solid example of how to make an effective use out of a comic book. For instance, Jean and Hope stumble into a building full of Reavers, much to their chagrin. Besides this page being beautifully drawn, Ibanez uses the layout of the vertical panel to show the incoming threat. This is just one of many examples of Ibanez expertly telling a story using striking techniques. It creates a flow in the comic that makes the pages fly by. I couldn’t get enough.

Along with the art, I couldn’t be happier that so many strong women grace the pages of JEAN GREY #2. Sometimes even female solo comics tend to be male-centric. Yet, Jean relies mostly on her female friends and colleagues for advice. The idea of women sticking together during tough times is especially relevant in today’s political climate. But regardless of the time, having Jean grow by the side of capable, confident women is inspiring, to say the least. In addition, during this Jean’s adolescence, a woman leads the X-Men. Perhaps this reincarnation, which has many more strong maternal influences, will develop some aspect of personality that the old Jean did not.

Read this series. You won’t regret it. I actually sighed out loud when I saw that I would have to wait another month for the next installment. Jean will explore more of the Phoenix, and we can only hope she remains unblemished. She is, after all, also leading a team of X-Men. As she grows and matures, I’ll definitely be following along. JEAN GREY #2 solidifies the fact that this series will surely be one of Marvel’s strongest in the lineup this year.