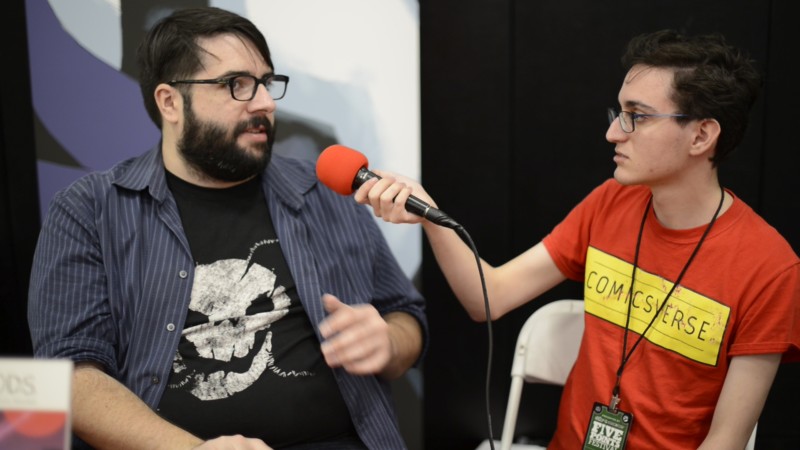 ComicsVerse was lucky enough to catch up with DETECTIVE COMICS and BATWOMAN writer James Tynion IV at Five Points Fest 2017. He took time out of his busy schedule to chat with us about DETECTIVE COMICS’ past and upcoming arcs, his issue of THE KAMANDI CHALLENGE, and his work on DC’s massive upcoming summer event, DARK DAYS: THE FORGE and DARK DAYS: THE CASTING. Catch the full James Tynion IV interview above.

WATCH: Want more info on DC’s upcoming events? We checked in with Scott Snyder and Greg Capull0 about DC METAL!

First, we asked Tynion about his first two Rebirth arcs on DETECTIVE COMICS. These arcs, titled “Rise of the Batmen” and “The Victim Syndicate,” were fantastic explorations of the limitations of Batman. We talked with Tynion about the themes of these arcs, and of his run on DETECTIVE COMICS as a whole. Next, we asked him about the future of DETECTIVE COMICS. We know from solicitations, and from recent issues, that Zatanna is returning to Batman comics and bringing magic with her. Tynion told us a bit about what kind of Bruce/Zatanna interactions we’d be seeing. He also spoke a bit about another piece of that arc, The Order of St. Dumas. The order is responsible for the creation of Azrael, now a member of Batman’s team.

Our interview then segued to a different series, THE KAMANDI CHALLENGE, for which Tynion wrote an issue. The concept of the series is each issue has a different creative team, and they leave a cliffhanger ending for the next writer to work their way out of. We talked to Tynion about writing for a series with that unique twist, and also about writing a relatively unknown character. Lastly, we asked Tynion about his work on the upcoming event DARK DAYS: THE FORGE and DARK DAYS: THE CASTING. He said he couldn’t tell us much, but then told us some fairly juicy tidbits about Hawkman and more. For the full scoop, watch our full James Tynion IV interview.

WATCH: If you liked this, take a look at our interview with SECRET EMPIRE writer Nick Spencer!

As mentioned above, Tynion’s current work includes BATWOMAN and DETECTIVE COMICS. Before that, he worked on comics such as BATMAN ETERNAL, CONSTANTINE: THE HELLBLAZER, and BATMAN/TEENAGE MUTANT NINJA TURTLES. He has also worked with several smaller publishers, writing THE WOODS and MEMETIC for BOOM! Studios and THE EIGHTH SEAL and THE HOUSE IN THE WALL for Thrillbent.