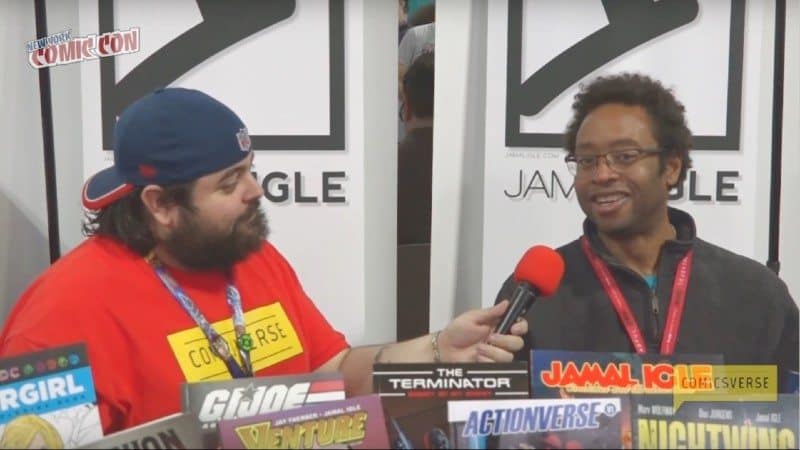 We had the pleasure of talking to Jamal Igle at New York Comic Con 2016. Jamal, known for his artwork in SUPERGIRL and FIRESTORM, took the time to talk to us about his latest project, BLACK.

Jamal joins Kwanza Osajyefo, Tim Smith III, Khary Randolph, and Sarah Litt as an artist on BLACK’s creative team. BLACK is a raw and powerful series based on the question “what if we lived in a world where only black people had superpowers?” Funded through Kickstarter, fans pledged $91,973, over $60,000 more than its $29,999 goal. In our interview, Jamal shares how he believes crowdsourcing levels the publishing playing field for independent comics, creating a safety net of sorts through a generous creative community.

Jamal also updates us on his Action Lab series MOLLY DANGER. MOLLY DANGER is the story of a 10 year old superhero who protects the city of Coopersville, New York, from an army of villains called The Supermechs, all while being isolated by D.A.R.T. (Danger’s Action Response Team) command. Though Jamal has been busy with the incredible success of BLACK, he let ComicsVerse know that news regarding MOLLY DANGER Book 2, which will be released between the end of 2016 and the beginning of 2017. MOLLY DANGER recently joined a dimensional crossover in ACTIONVERSE #2, also written by Igle, published in April 2016.

As expected, Jamal is still receiving praise and commissions for his success on his run of SUPERGIRL. Igle and writer Sterling Gates endeavored to “fashion [Supergirl] in a way that [they] felt represented not just her as a character well, but [also] the legacy of the S and everything that came with it.” Igle and Gates continue to receive praise from the likes of the HOLLYWOOD REPORTER, especially in light of SUPERGIRL’s television success.