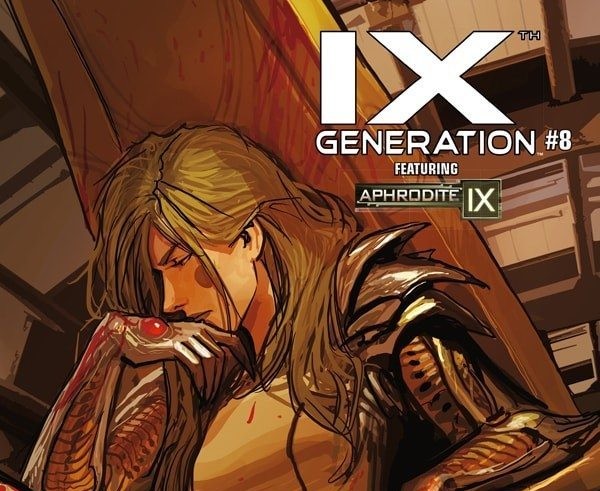 IX GENERATION is a comic book filled with eccentric writing and jaw-dropping art. This issue was the finale of IX GENERATION, and it went off without a hitch. From the characters trying to resolve their problems with each other, as they know they’re short on time, to the moment where the final battle takes place, you couldn’t ask for more. Matt Hawkins and Atilio Rojo team up to create a world about futuristic demigods who are supposed to be working together to fight off the darkness, but instead wind up fighting each other.

IX Generation is a spinoff of the APHRODITE series (also written by Matt Hawkins) that puts our main character, Aphrodite, back to doing what she does best, killing people. Aphrodite is a part of the Top Cow universe, similar to how Spider-Man is a part of the Marvel universe. What this means is that she’ll bee seen teaming up with characters from other comics. Just to give you an idea, IX Generation is the equivalent of Marvel’s Avengers. This is a story about 9 people who were chosen by a higher power to be demigods. They do have normal names, but are given the names of Greek gods and goddesses, such as Artemis and Hermes.

These chosen few were entrusted with a Utopia to share with one another. Instead, they decide to divide the world into 9 parts, one for each member of the IX Generation. Just like what happens in the real world, some people wind up getting greedy and want more then should have. This leads to wars between some of the IX Generation. Then, the darkness comes and the fighting is put on hold, for this is an enemy that cannot be fought alone. The darkness is an entity that is made up of mankind’s mistakes from the past, and it tries to destroy everyone and everything. One thing I find really cool that goes along with the Greek god/goddess theme is that they are each given an ancient mystical/magical artifact. There’s the witchblade, pandora’s box, the wheel of shadows, and many more. These artifacts add to the story as they play important roles in deciding the fate of the IX Generation. 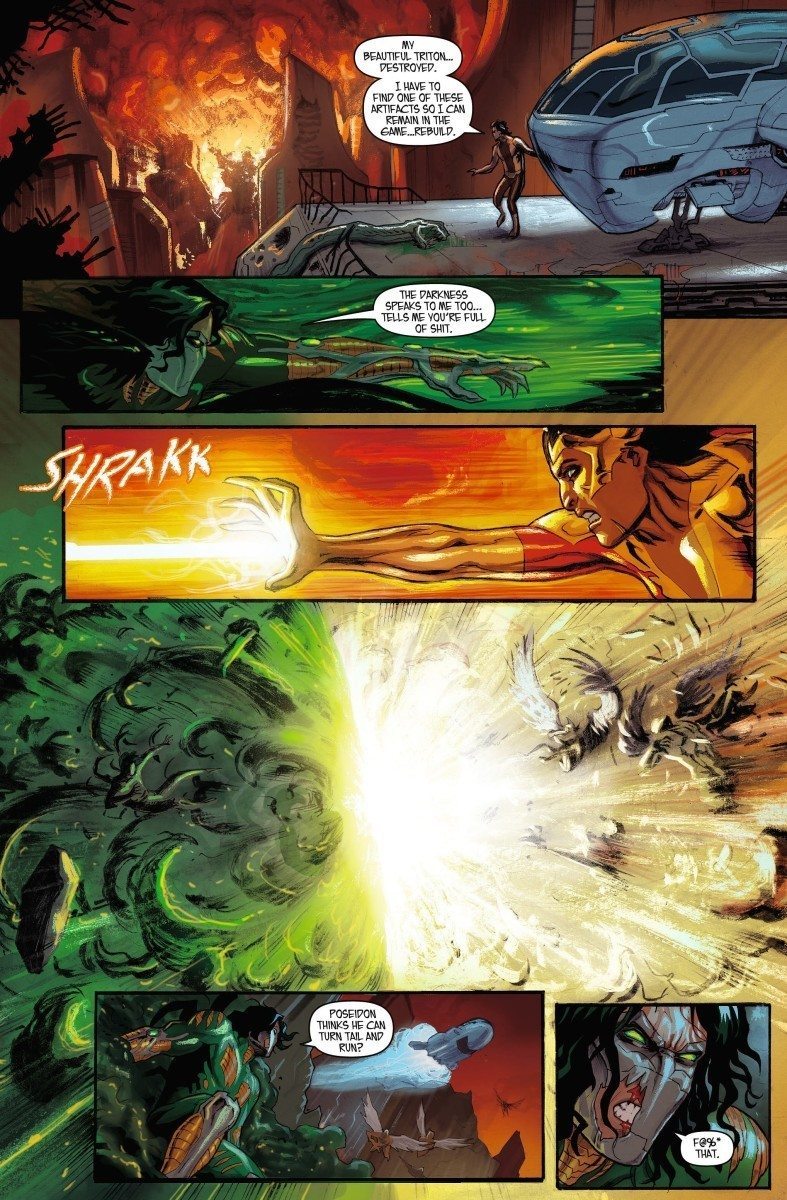 Writer Matt Hawkins, who is known for his run on THE THIRTEENTH ARTIFACT and TALES OF HONOR, writes a story that you could only find in the wildest of imaginations. I mean, futuristic demigods fighting in space with mystical/magical artifacts? That’s crazy! When companies such as Image and Top Cow give you creative freedom over your own work, then you will not only sell, but you’ll also tell a great story that fans will remember for ages.

READ: Like Top Cow titles? Then take a look at TALES OF HONOR!

Atilio Rojo is a comic book artist on titles such as POSTAL, the TRANSFORMERS comics, and IX Generation. He does the illustrations for the finale issue of IX GENERATION, which are fantastic. From the scenes of the attack on the city of New Cythera to the hacking and slashing of the hordes of enemies that Hermes goes through, they are all beautiful. For a comic, Rojo gives you a sense of realism through his art for a story that combines futuristic and past aspects. His characters look so lifelike that Hawkins’ writing only adds to making us believe in these people. 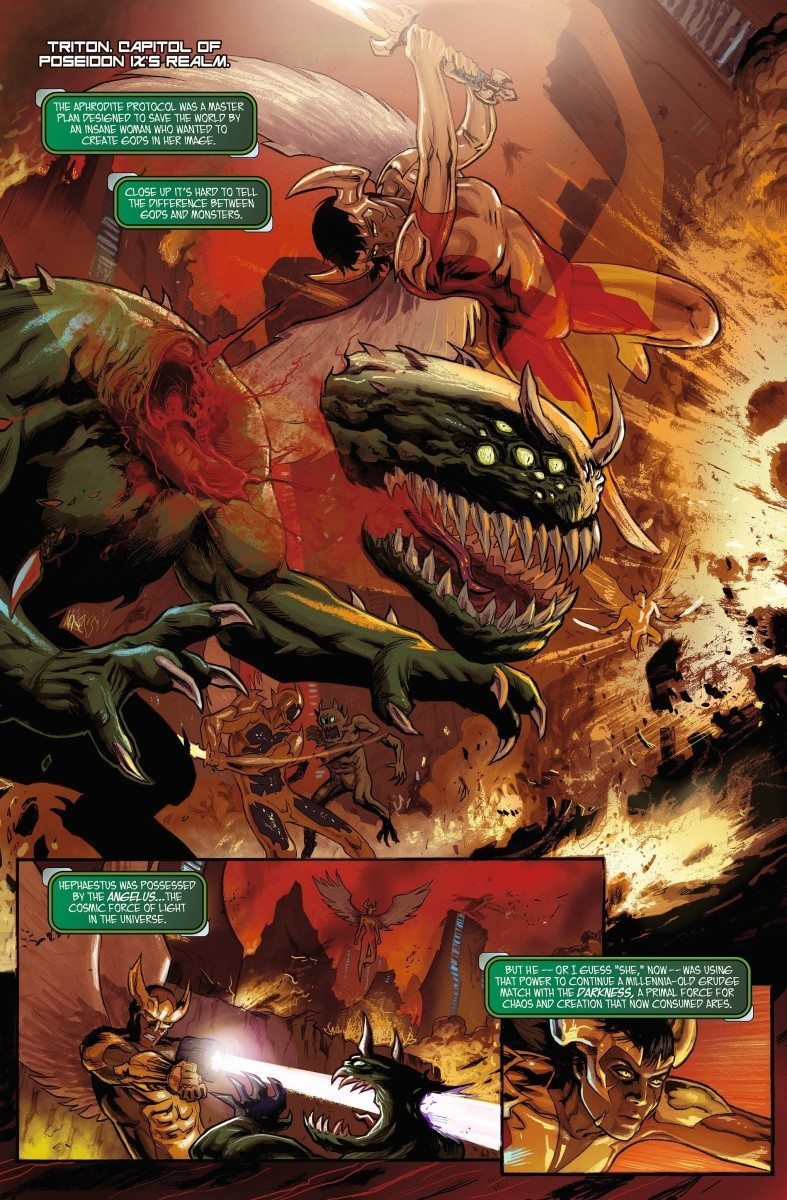 A similarity can be drawn between the people who read IX GENERATION and the Romans/Greeks from hundreds of years ago. Both groups have been told stories of fearsome fights between gods and goddesses with an outcome that will change their lives forever. Hawkins and Rojo have given these characters a life of their own by giving them real life responsibilities that even we as humans struggle with sometimes making.

WATCH: Check out our interview with Matt Hawkins!

IX GENERATION is a story that attracts fans of sci-fi and history to the comic book world. I highly suggest that more readers who want to stray away from the common super hero market and look for something new and out of the ordinary take a look at Top Cow comics.