Alterna Comics’ IT CAME OUT ON A WEDNESDAY #2 is the latest entry in their sci-fi and horror anthology. This collection represents a phenomenal opportunity for artists and writers to share their creativity with other fans of the absurd, the chilling, and the mysterious. This series is a treat for both creators and fans within the Indie comic community, but there’s something for every reader to take a bite out of and enjoy.

Like the last entry, IT CAME OUT ON A WEDNESDAY  #2 features an interview with the cover artist. This month’s cover was done by the talented Kelly Williams. Unlike the last cover, which featured a grotesque hunchback, Williams greets the reader with a goofy, blobby creature. It perfectly captures the variety of stories and tones you can expect to see within its pages. The interview itself is inspiring, insightful, and definitely worth a read. 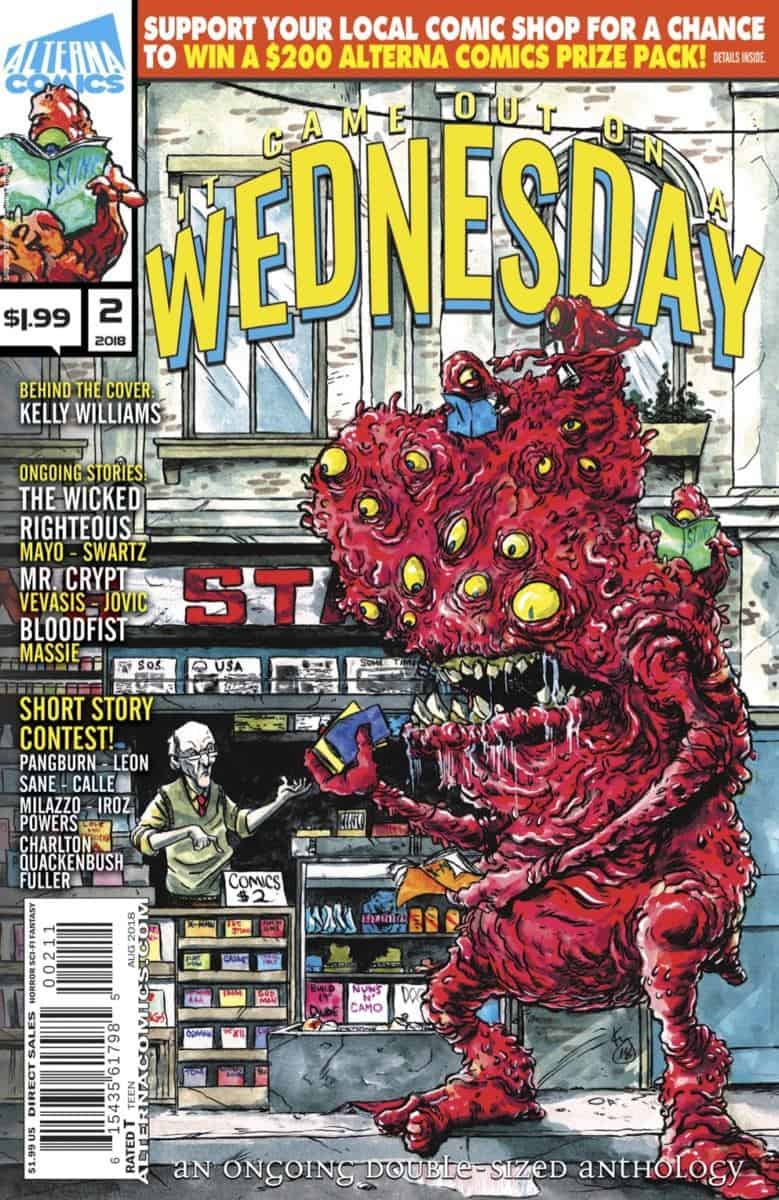 The first entry, KÄSE RATTEN, is written by Justin Sane, with art by Juan Calle. The comic plays out much like a ghost story or a fairytale.  Its 19th century German setting certainly helps in that regard. KÄSE RATTEN focuses on a young girl, Katja, whose brother falls into a mysterious hole in their bedroom. He emerges as some kind of puppet; hollow, except for the swarm of rats that fill up his body. This may sound horrifying, and while some images are a bit creepy, the overall style is colorful and cute. 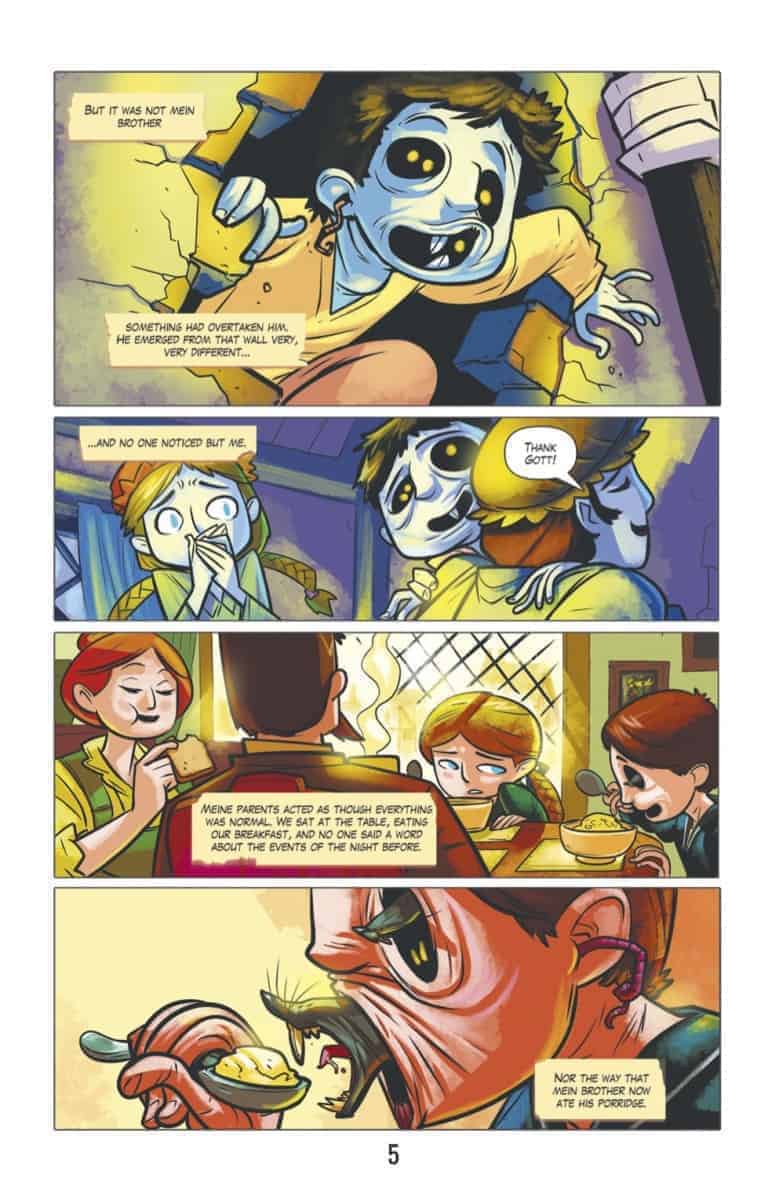 The combination of gross, creepy, and cute imagery never clashes together. Instead, artist Juan Calle creates a charming, unique style that helps sell the absurdity of its premise. If an animated Goosebumps show were to ever come about, this style would be a perfect fit. Like all of the entries, it’s very short, but manages to pack a lot of charm and humor into its pages. 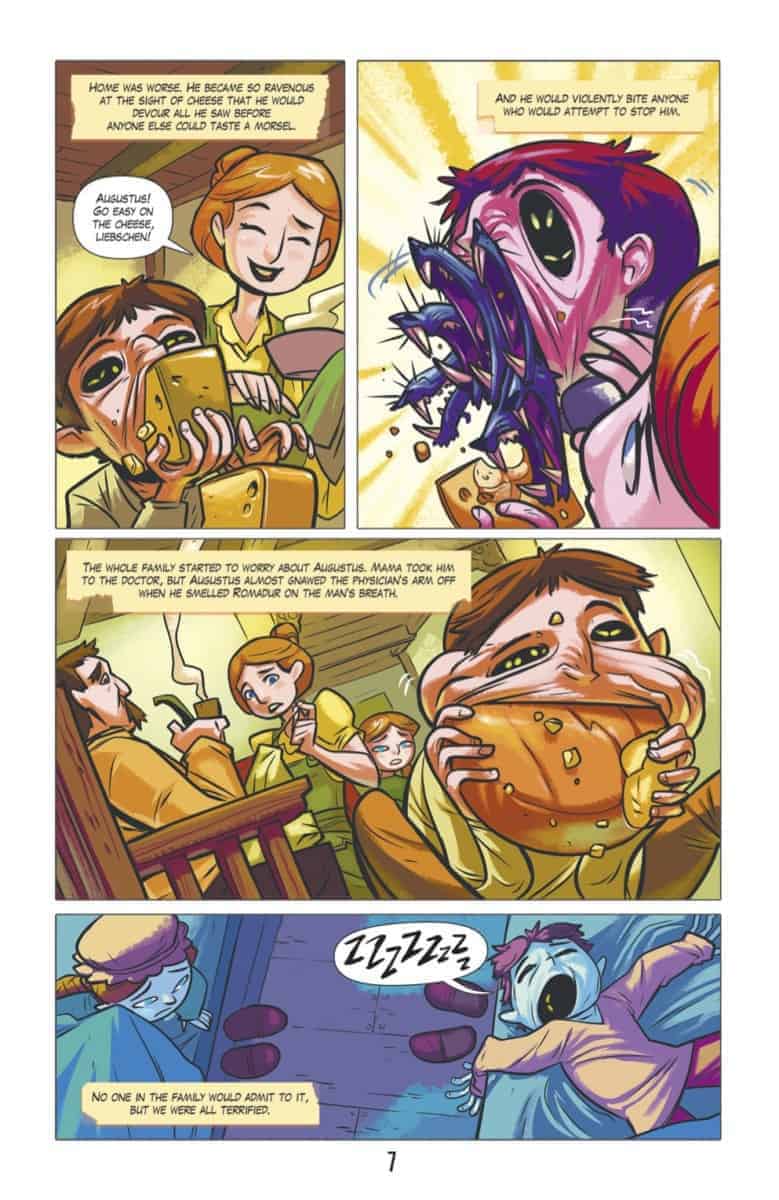 V1RUS is a two-page sci-fi/horror comic by Shawn Milazzo, with art by Cem Iroz. A jealous techie decides to take revenge on a cocky crewman who snatched up his crush. He decides to take a look at the bugs in the crewman’s computer… but he’s not looking to fix them. 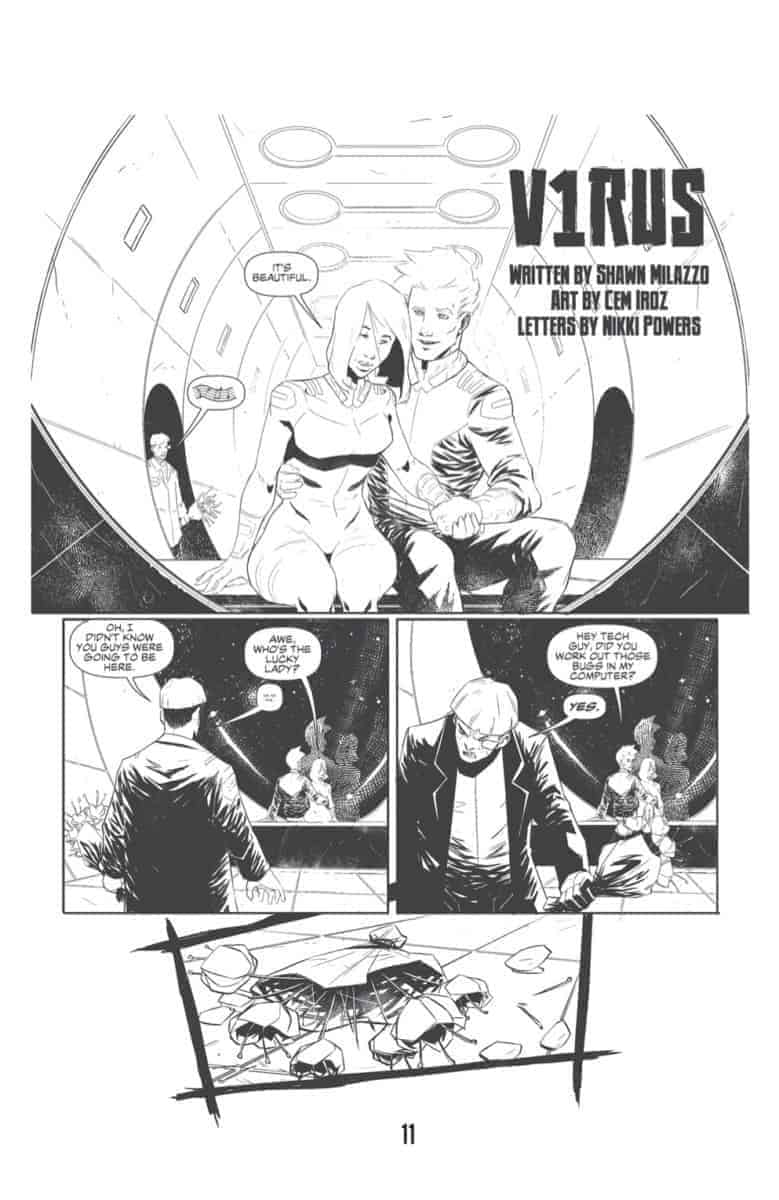 Because the comic is so short, V1RUS relies a lot on visual storytelling to get its ideas across. The black and white imagery in this comic has always been a staple of sorts for horror stories. Perhaps because it harkens back to classic monster movies, such as Dracula or Frankenstein. More likely, the lack of color simply creates an atmosphere of mystery and bleakness. The comic is also very funny, despite the foreboding introduction. I’m not sure if this is what Milazzo was going for, but it turns out the “bugs” in the computer are quite literally giant, crawling creatures. I’m a big fan of clever wordplay, and the combination of humor and horror helped V1RUS to be a memorable entry in IT CAME OUT ON A WEDNESDAY #2.

Like last time, there’s very little to say about MR. CRYPT. This single-page comic by Troy Vevasis with art by Aleksandar Jovic seems to be a little advertisement for the MR. CRYPT series. If that’s the case, MR. CRYPT serves as a nice little taste of the longer, goofy adventures of the dapper skeleton.

BUILD SOMETHING GREATER follows a young, spunky woman traveling though the wastelands of post-apocalyptic Earth.  The punk-rock design of the main character initially reminded me of TANK GIRL, although the overall art style is not as wild. That’s not to say BUILD SOMETHING GREATER doesn’t have its own attitude. The kinetic poses and disheveled (Yet highly detailed) backgrounds by Nico Leon gives this comic an air of rebelliousness and adventure. 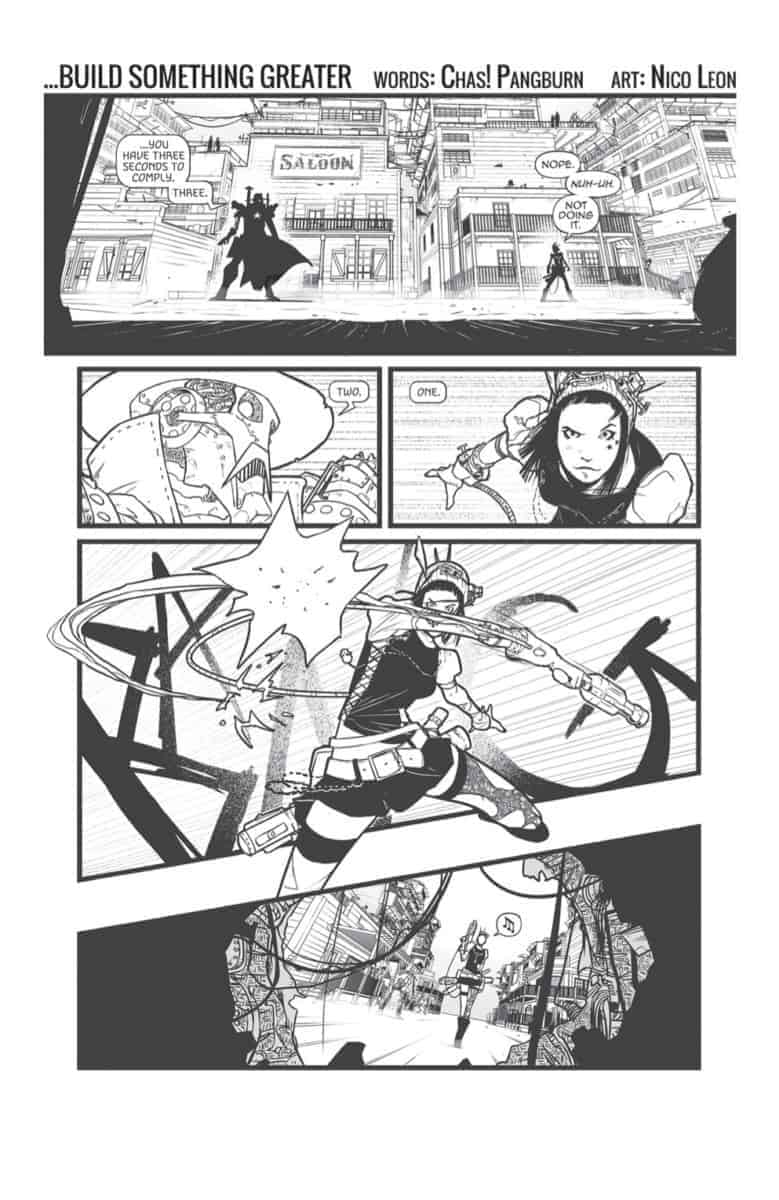 In addition to the art, the writing does a great job at world-building, as well. Through dialogue and narration, writer Chas! Pangburn makes it very easy to piece together what happened and what’s going on. All this is accomplished within four pages. Robots took over the world, and one woman tries to make the world a better place… one dead robot at a time. It’s unclear if Pangburn plans on continuing this story, but I hope we see more of this rock & roll wasteland.

Like KÄSE RATTEN, THE DOLLS feels very much like a fireside ghost story. The spooky narration, delivered by a mysterious stranger, certainly helps in that regard. The stranger leads us through a terrifying tale of a woman haunted by the her dead children, who inhabit life-sized dolls from a Christmas long past. 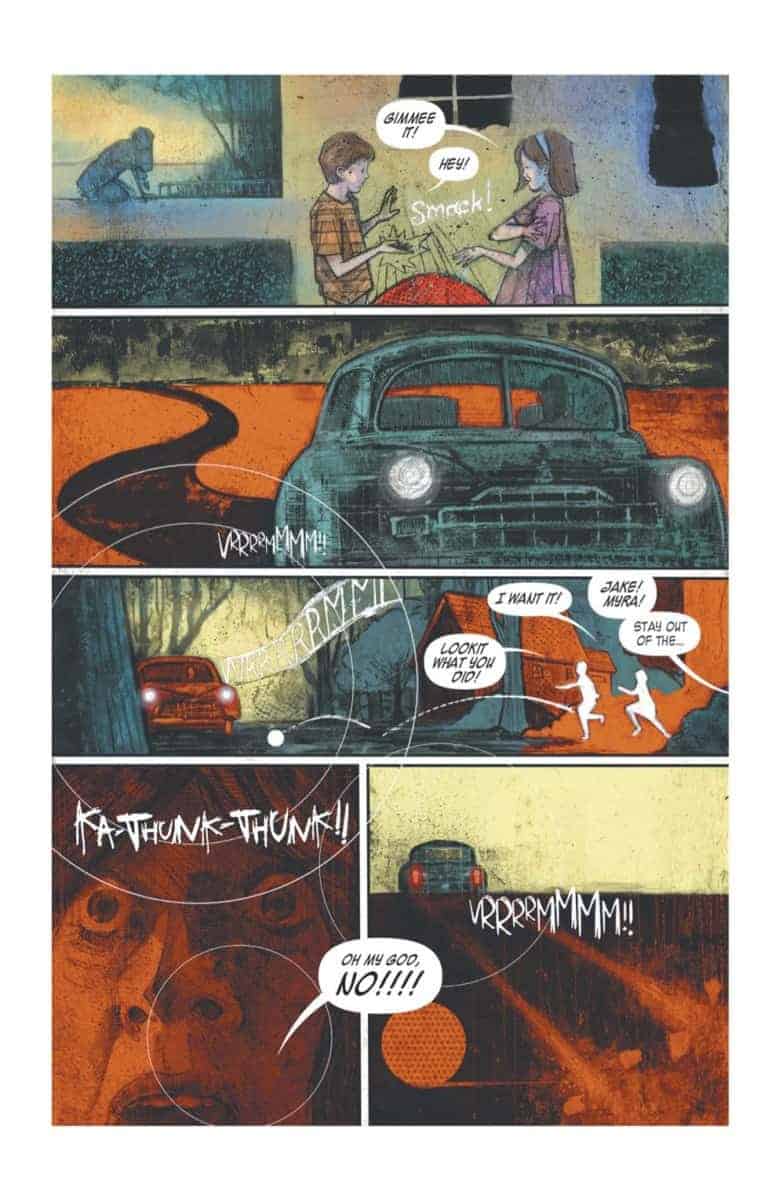 Christopher Charlton, the writer of THE DOLLS, does an excellent job at letting the dialogue and narration blend together cohesively. Although the speech and thought bubbles are clearly coming from the mother, the writing style heavily implies that these are just the images appearing in our minds after hearing the stranger’s ghastly tale. Again, hearing this story from the point of view of a single narrator sells the aura of a campfire ghost story. I’m not sure if this was what Charlton had in mind, but that’s the feeling I got. 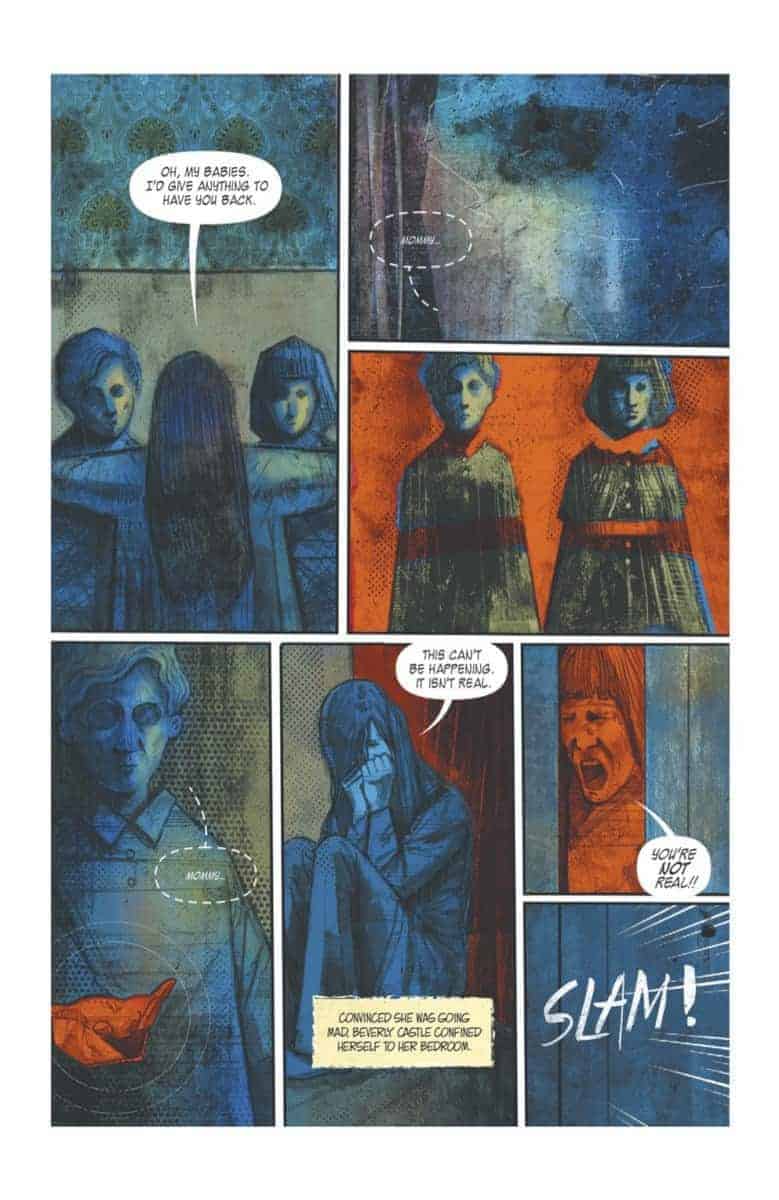 The artwork by Ryan Quackenbush is as creepy as it is captivating. The realistic textures, juxtaposed with the sickly yet bold color schemes create a nightmare in an otherwise ordinary setting. The distorted shapes of the backgrounds and characters make things feel otherworldly, without being incomprehensible. It reminds me very much of the artwork in the Arkham Asylum graphic novel, except its actually comprehensible and doesn’t serve as a crutch to a pretentious script, but that’s besides the point. THE DOLLS is the most chilling entry in IT CAME OUT ON A WEDNESDAY #2. If scares are what you’re looking for, you’ve come to the right place.

Everything in AVENGERS: INFINITY WAR is a Remix

Continuing on the horror train is THE WICKED RIGHTEOUS: GENESIS by Terry Mayo with art by Dave Swartz. This new installment gives us another point of view at the viral apocalypse. Luckily, you don’t need to know anything about the previous IT CAME OUT ON A WEDNESDAY entry to understand this one. The stage is set immediately: A makeshift hospital is filled with infected people, all of them contaminated with the deadly pathogen. We follow one of the doctors assigned to euthanize the infected. Her conscious prevents her from carrying out the heinous deed as demanded by her superiors. However, in sparing one of the patients, she may have condemned her to a life worse than death. 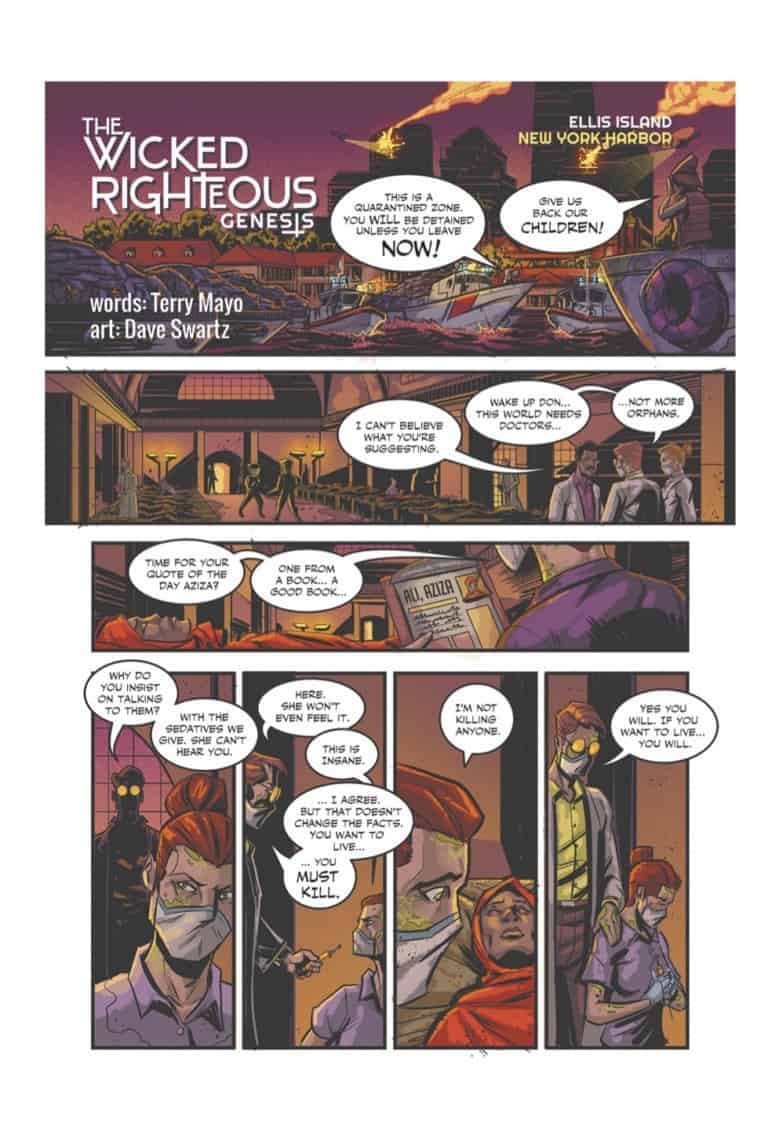 Like the previous entry, this two-page comic is a side-story in the world of THE WICKED RIGHTEOUS series. Having not read that series, I’m not sure if this comic will tie directly into the larger story. However, given the cliffhanger ending and the “To Be Continued…” box, it seems this entry will be the start of a new story set within the same world. It will be a treat in every IT CAME OUT ON A WEDNESDAY entry to see how this story unfolds.

Moving away from the dark and dreary, we arrive at WEDNESDAY’S final entry: Jeremy Massie’s wacky world of Bloodfist. BLOODFIST: THE PORTAL! was a great surprise in terms of its improvements since the last issue. I mentioned in my review of the first WEDNESDAY anthology that BLOODFIST just wasn’t my thing. I appreciated the absurdity of the story, but I felt although it was holding itself back. It turns out, I don’t know what the hell I’m talking about, since BLOODFIST was voted as the overall favorite entry of last month’s anthology. I fear writing a more positive review will have the opposite effect, as my attitude on Massie’s comic has certainly changed for the better. 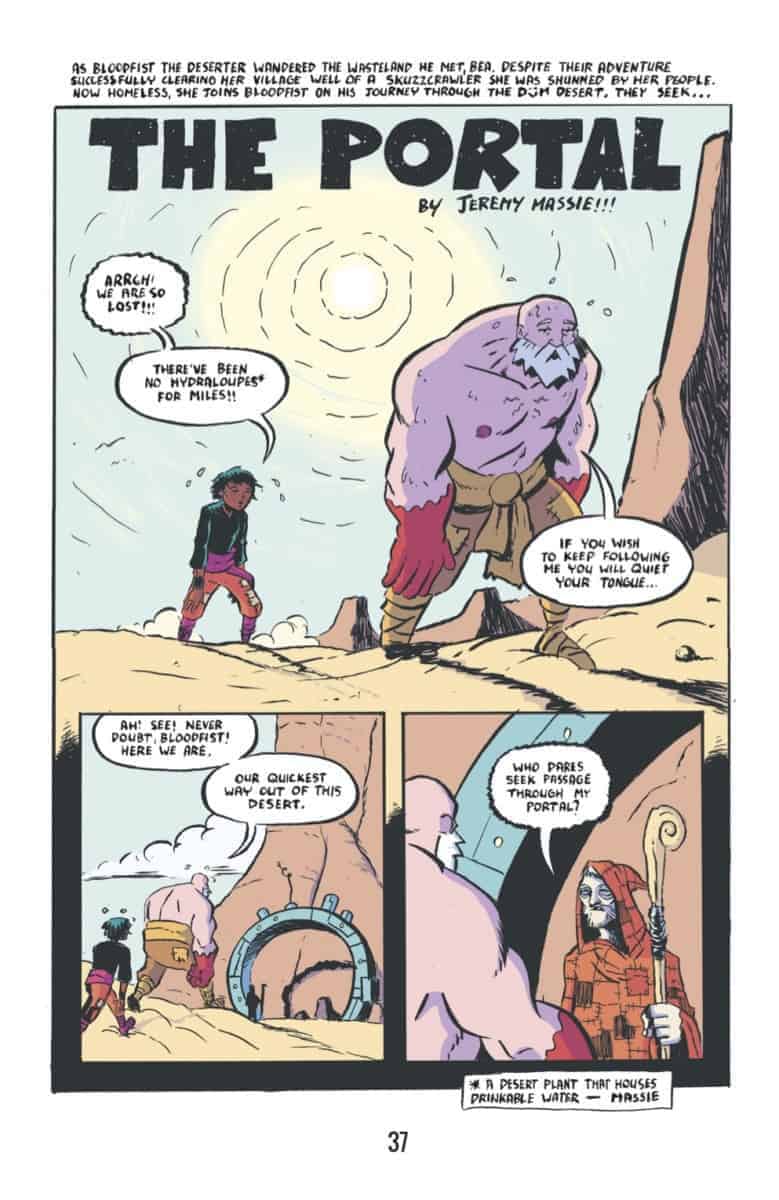 BLOODFIST’s weirdness level is cranked way up in the latest issue. In this installment, Bloodfist and his companion, Bea, must step into a portal to continue their journey through the wasteland. Unfortunately for them, the portal drops them into the inescapable tentacles of General Villus (Or so it seems). Eagle-eyed readers may recognize Villus as the general who appeared in one of the first panels of the first issue. Bloodfist and Bea both recognize him, but we don’t get to learn more… yet. 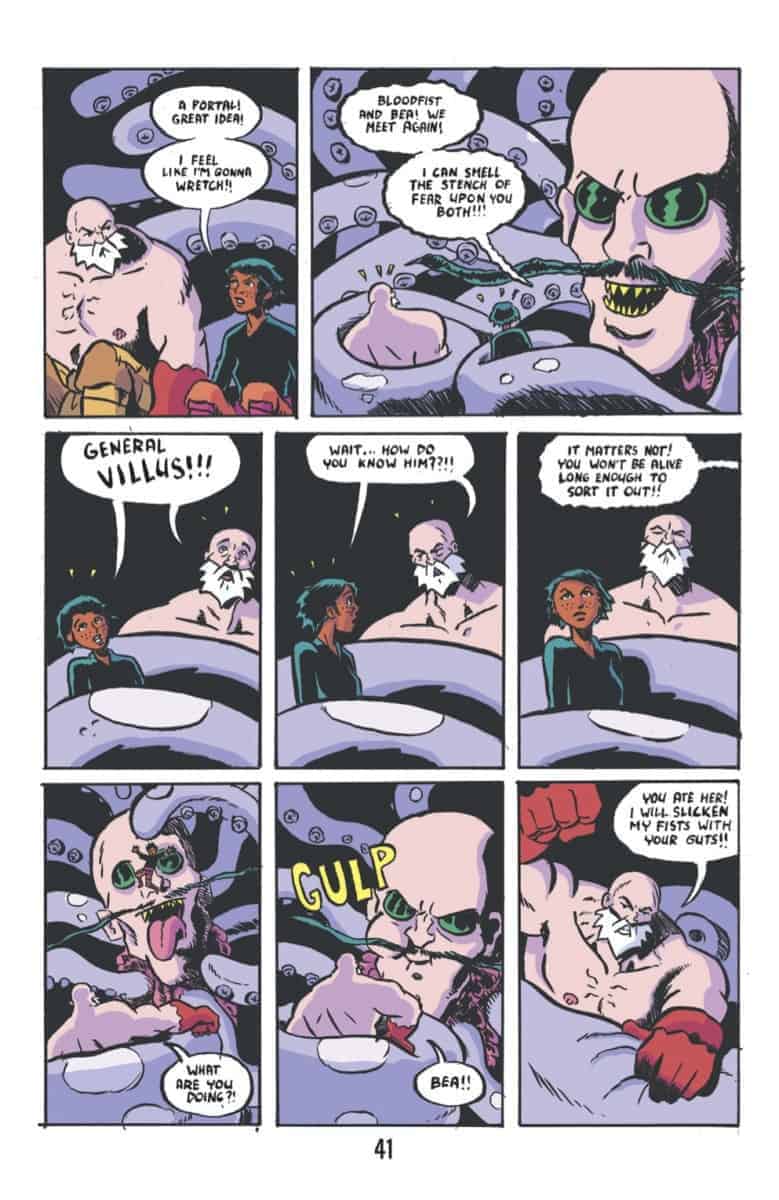 I love this for so many reasons: First, it shows that Massie has a clear vision for the past and future of these characters. Second, it seems to be the first step towards Massie embracing the weirder side of his world. If you have a main character named Bloodfist, you have to keep finding ways to up the weird-factor. Third, it gives us some great visuals. The colorful, trippy artwork is a perfect companion to the absurd plot. I hope this signals the start of the increasing ridiculousness of BLOODFIST.

Final Verdict on IT CAME OUT ON A WEDNESDAY #2

There’s something in IT CAME OUT ON A WEDNESDAY #2 for everyone; humor, horror, and outstanding art throughout. If you want to enjoy some of the great work within Alterna’s indie anthology, while supporting the enormously talented artists, stop by your local comic book shop. There doesn’t seem to be a place to buy the new issue online yet, but in the meantime, you can buy their first issue here. And for you aspiring creators out there, if you have a comic you would like to see published in the April 2019 issue, you can submit your work here for a chance to be featured.