Last week was the long awaited debut of IRON FIST. Marvel’s last original Netflix series before the two companies bring it all together for THE DEFENDERS. The collaboration between the two companies has been profitable, with three widely acclaimed series (DAREDEVIL, JESSICA JONES, and LUKE CAGE).

However, the new kid on the block arrived with some baggage–a fist-full of it. IRON FIST was Marvel’s first negatively acclaimed TV show on Netflix, receiving an average rate of 4.2/10 on Rotten Tomatoes (18%). Critics have complained of lackluster fight scenes, a meandering plot, and a broken, leading man. Fans and casual viewers alike were shocked to see a Marvel series, especially one preceding the likes of DAREDEVIL and LUKE CAGE, do so poorly.

I was not one of them.

Now, as I am writing this piece about IRON FIRST, I have seen only one episode. While I do see some of the complaints have merit, I am not ready to write off the series just yet. Nonetheless, I have watched all the previous Marvel Netflix Original series’, and they did prepare me for a certain degree of failure. Whether fans want to admit it or not, each show has/had a central problem that hindered it. These fundamental problems only got worse as each new show premiered.

That does not make them unwatchable, but it does show a troubling progression. It makes IRON FIST’s critical scores feel like a culmination of problems that have developed over time–or in this case, over seasons of the previous shows. Shocked fans might want to look back at the previous series’ and admit that maybe they were not as perfect as we once remember.

Problem 1: Too Much Karen Page in DAREDEVIL?

The first season of DAREDEVIL, the first of the Netflix herd, set the tone for the upcoming series’ that came. That tone was infused with dark, gritty street level heroics, with the main hero balancing the stress of two lives, and showing all the bruises of his choices while he fights a deeply personal battle. It was a departure from the bright, family-friendly showings of the Marvel films, and a rebirth of a classic character after a disastrous feature film attempt.

At the same time, the show also featured a character that became a nuisance–Nelson and Murdock’s secretary, Karen Page. The character’s introduction served as a gateway for the plot of the first season, Karen is nearly framed for murder after blowing the whistle on her employers. Karen’s introductory time was fine, but she began to show problem traits early on–namely her idealism and borderline Mary-Sue character.

Karen was more passionate than her lawyer bosses, often going out on her own to find evidence, then continually acting shocked when her prodding caused trouble. It got even worse when she regularly acted against the advice of her lawyers/bosses, putting herself in danger and severe legal ramifications, yet nothing came of it for her.

The consistent lack of character development with Karen Page would not have been an issue; however, it got even worse. In the last few episodes of the first season Page tricked reporter Ben Urich into helping her track down and interview the Kingpin’s senile mother. This could have been a decent plot point if Page was not grilling a person that is not in their right mind. Therefore, leading Kingpin to murder Urich personally, and Page herself becoming captured by Kingpin’s right-hand man Wesley. (Another doing on her own, that got her in trouble.)

The two end up playing a game of cat and mouse with a loaded gun, and Page comes out victorious. The act of killing a man has scarred he so much that she never talks about it and after a single episode, it is never brought up again. Nor does she learn anything from Urich’s death, as by the next season, she has taken his old job (more on that later). Karen Page was not enough to ruin the series, but she was a major down point in what was otherwise an excellent show.

Problem 2: Too Many Filler Episodes That Weren’t Good Enough

JESSICA JONES followed DAREDEVIL and managed to keep some of that show’s stronger elements (more human heroes and more focus on a personal struggle) while adding elements of noir style, and delving into more serious topics like rape and PTSD. Marvel even managed to keep the gritty feel as Jessica deals with a superpowered criminal (Kilgrave) that can control minds.

It was an excellent follow-up to DAREDEVIL, and my personal favorite of the Netflix shows so far. I will admit it had its flaws and this time, the characters come out intact, with no one being unlikeable or annoying. The fault lies in writing, namely, the two episodes that stand as a filler with one showcasing the main character making bad decsions.

The less painful episode “AKA I’ve Got the Blues,” fails since its primary purpose is being a needless flashback episode that illustrates the season-long trait that Jessica and Trish Walker have a sister-like bond. It’s unnecessary and feels like a setup to add depth to Walker’s super-pill induced medical scare later on. The biggest problem episode “AKA Top Shelf Perverts” is a chore to get through. An increasingly unstable Jessica decides to stop Kilgrave by getting herself locked up in “super-max” so that he will come after her and be detained.

READ: Are You Excited About Spider-Man: Homecoming? So Are We! Check Out 5 Exciting Things!

There are two problems here: first, the episode shows that Jessica’s crafted support system of people can’t stop her from going through with a bad idea. Second, her plan to get arrested is to dive into the Hudson River, pull a head off a corpse, go to the station, demand to go to super-jail, and then throw a super tantrum when the cops start using due process. It makes Jessica look dangerously impulsive, makes the supporting cast look useless, and is just a poorly thought out idea. When Kilgrave shows up to wipe all evidence of Jessica from the computers and the cops’ minds, you wish he could make you forget this episode too.

Problem 3: One Season, Two Stories, One Got Changed

This is where fans began to notice problems. Season 2 of DAREDEVIL got off to a great start, as Daredevil tangled with the Punisher. The two vigilantes bounced back and forth about their individual methods (imprisonment of criminals vs. killing them outright) and were able to share compelling debates that grabbed the audience and promised a great season.

Then it was over after four episodes.

Not over since Punisher was still around and on trial, but the focus shifted over to Daredevil’s ex-girlfriend Elektra and watching the two of them argue over the morality of killing instead. If this story had been done on its own, it might’ve been more impactful. Instead, Elektra couldn’t measure up to the tragedy and intensity of the Punisher and came off more like an annoying ex-girlfriend trying to get back to the good ol’ days. Things only got worse as the show revealed that Elektra was secretly a quasi-magic cult weapon called ‘Black Sky.’ (That’s JUST what a gritty street superhero show needs.)

READ: ComicVerse Is Waaaaay Smitten with BINGO LOVE, Are You?

With Punisher’s trial and Matt Murdock’s serious stumbling blocks trying to defend him (thanks to Karen Page again being idealistic, before leaving because she’s suddenly a journalist now), the season felt like a mishmash of elements. The Punisher episodes were marvelous, but too few, while the rest of the season felt like building blocks for the DEFENDERS.

It is more disheartening when you realize Marvel made the same mistake that DC and Sony made in their films–placing the franchise over the individual movies. BATMAN VS SUPERMAN was trying to showcase multiple heroes so DC could get to JUSTICE LEAGUE faster. AMAZING SPIDER-MAN 2 was too concerned with setting up SINISTER SIX and VENOM movies to curtail its problems. Marvel cut short the best element of Season 2 and added in weaker parts so they could build up to THE DEFENDERS. 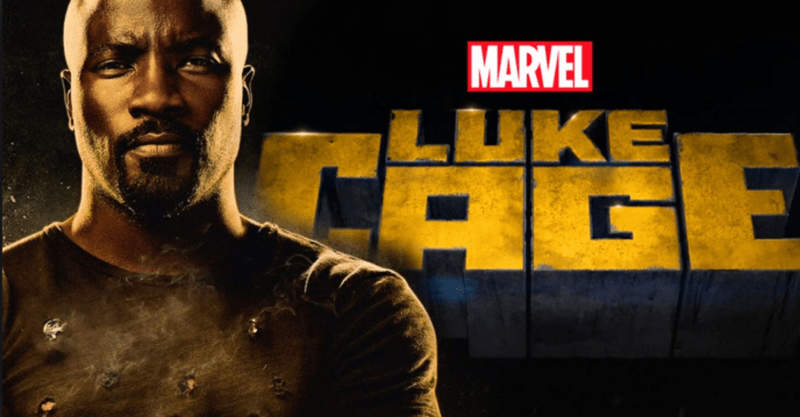 Problem 4: Half a Story with a Terrible Ending?

LUKE CAGE broke a lot of barriers for Marvel. It was the first show about an African-American superhero, it used hip-hop and rap music to define itself, and it was an early glimpse of the Oscar-winning talents of Mahershala Ali as villain Cottonmouth. The series seem poised to be a new standard for promoting urban heroes and African-American culture at the same time.

For half its run… that is.

The seventh episode “Manifest” ended with the death of Cottonmouth, who had been built up exceptionally well as a sophisticated, intelligent gangster that had his vision for reshaping Harlem. His partner and his politically corrupt cousin Mariah was left to fill his shoes, but the hole left was palpable.

At first, the series seemed poised to fill it with Shades, an established character that was quick to move in and start manipulating Mariah following Cottonmouth’s death. However, this went nowhere as the show decided to add Diamondback, a similar gangster to Cottonmouth. Sadly, the series didn’t have enough time to build him up properly, so his eventual rivalry with Luke had a rushed half-brother story that ended with Diamondback having a fist fight with Luke while wearing the silliest looking suit ever worn in the history of Harlem.

Cage wins the fight, but it doesn’t matter once we get to the ending. Not only does Mariah go free, but Luke Cage’s fight revealed him to the public as a whole, and Georgia police came to return him to jail on bogus claims. Which means, the first real African-American superhero show ends with its hero getting arrested and driven back to the South. (Talk about an ending, Marvel.)

READ: Why We Live In A World Full Of Instagram Models and SnotGirls!

All of these shows did have some good moments, but they also had their issues in the same light. It is possible that fans chose to recognize the good instead of the bad and pretend that the bad never existed. However, that resulted in Marvel not knowing what to fix when new series’ were being developed. When all the fans focus on the good of the show throughout social media, word of mouth, etc., Marvel does not see what to change to make the next series’ even better than the last. This results in problem characters, filler episodes, and mismatched storylines with terrible endings.

Does that mean IRON FIST was doomed from the start? Who knows? The show would have likely had its set of problems no matter what happened. By ignoring the problems of its predecessors, IRON FIST suffers from many of them. It has the strange plot tangents of JESSICA JONES, DAREDEVIL’s rush to get to DEFENDERS, and LUKE CAGE’s odd character development. When you look at the progression, IRON FIST’s problems seem well… almost fitting. I’ve said before that the MCU needs to end before it wears out its welcome.

Maybe this is a sign we are getting there already.