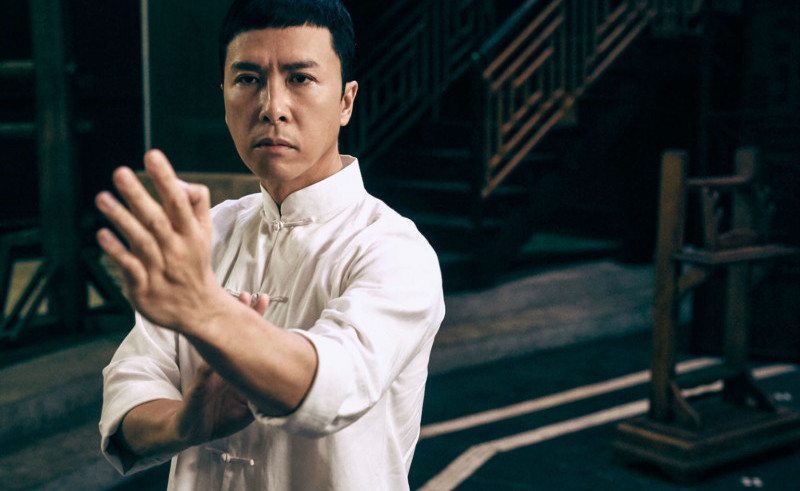 For many American audiences, settling in for ROGUE ONE meant dipping back into the beloved STAR WARS universe. While I certainly love STAR WARS, a portion of my excitement was channeled toward getting to see Chinese superstar Donnie Yen finally get the spotlight he deserves in front of an American audience. In ROGUE ONE, Yen plays the blind Force acolyte Chirrut Imwe, and my two greatest hopes for the character going into the film were for the role be an opportunity for Yen to show off his incredible martial arts skill (mention his skills) and his natural charisma.

Judging by the reception of fans to the film, Yen has managed to make Chirrut another iconic part of the STAR WARS franchise. Now the question new fans of Yen might be asking is, what can I watch next for that Donnie Yen fix? While Yen has appeared in a handful of American productions (including BLADE II and SHANGHAI KNIGHTS), he is sadly underutilized in these productions. If you want a true display of Yen’s badass prowess on-screen, you’ll want to check out films like IRON MONKEY, HERO, DRAGON, or my personal favorite, the IP MAN trilogy.

CLICK: The case for a stunt performance Oscar, an award that is well overdue

The IP MAN films, each directed by Wilson Yip, tell the story of the life of Ip Man (also known as Yip Man), the martial arts Grandmaster of Wing Chun kung-fu style who would teach scores of students in the ways of martial arts following World War 2, the most well known being none other than Bruce Lee. When you’re setting out to make a film based on the life of the teacher of one of the greatest cinematic badasses of all time, you’re setting the audience expectations for well executed fight sequences pretty high, but each of the IP MAN films meets that bar and manages to find inventive ways to diversify the fight sequences from film to film. No two fight scenes are the same and many of the fight scenes include characters with contrasting martial arts styles squaring off, allowing Yip and legendary fight choreographers Sammo Hung (IP MAN 1 & 2) and Yuen Woo-Ping (IP MAN 3) to craft thrilling set pieces film after film.

What also elevates these films is Yen’s performance as Ip Man. Rarely ever do audiences, especially American audiences, get to see such a quiet, humble hero at the center of action films. Yen imbues his version of Ip Man with contemplative dignity and grace, but can also disarm with a charismatic smile or chuckle. There is a rich level of depths to the role, no doubt coming from the time Yen spent meeting with Ip Man’s son to discuss his father and his philosophies; Yen even spent several months just practicing Wing Chung martial arts because he had never practiced the fighting style before getting the role. His level of care to accurately portray Ip Man shines through in each successive performance.

All of the IP MAN films focus on a different era in the life of Ip Man, moving through the decades and Chinese history. Along the way, the journey of Ip Man reflects the changes within Chinese society at the time. Ip Man is put in the role of stalwart hero representing the values and traditions of China made flesh, facing off with personifications of the social changes coming to the country.

The first IP MAN primarily takes place in 1937 during and after the Japanese invasion of China. The story has some conventional elements, Ip Man tries to remain under the radar and live a domesticated life despite his incredible Wing Chun skill, but is inevitably confronted by a rival with mastery of the Northern Chinese style of martial arts. These scenes are very fun, but the film shifts the importance of martial arts to a matter of national pride when the Japanese General Miura (Hiroyuki Ikeuchi), a master of karate, enters the city of Foshan. Here he offers rice to the starving men of the city in exchange competing against his soldiers in combat.

The first IP MAN establishes the formula that the remaining films of the trilogy will follow: Ip is challenged in his martial arts mastery by a fellow Chinese disciple, a foreign fighter of hand-to-hand combat enters Chinese society, Ip Man thoroughly whoops him. However, as with all things dear reader, the fun is in the journey and not the destination. The first IP MAN film’s fight against 10, that’s right, 10 black belts is worth the price of admission alone.

The stakes are raised even higher in IP MAN 2 when Sammo Hung, still on fight choreography duties, steps in front of the camera to portray Hung Chun-nam, a master of Hung Ga who questions Ip Man’s abilities as a teacher, leading to a thrilling face-off between Yen and Hung, two legends of kung-fu cinema. Like its predecessor, Ip also finds himself squaring off with a foreign interloper, a British boxer named Taylor “The Twister” Miller (Darren Shahlavi). Where the battle with General Miura acted as an allegory for the Chinese fortitude during the Japanese occupation, Ip’s fight against Miller symbolizes the quiet strength of the martial arts, especially Wing Chung, when compared with the brute force of European fighting styles like boxing. In fact, IP MAN 3 also features a fight with Ip against a boxer, Frank, played by Mike Tyson (yeah, that Mike Tyson).

This choice of antagonist for IP MAN 2 and 3rd films creates a symbolic juxtaposition through the fighting styles of Ip Man and his opponents. Both Miller and Frank are brutes and brawlers. They both focus on brawn and hurling their fists towards their opponents. Both characters are traditional masculine archetypes who believe true power comes from strength (perhaps a not so subtle criticism of the geopolitical attitudes of the home countries of these boxers during these eras).

CLICK: ROGUE ONE brings back a long missing element from recent blockbusters: stakes

Yen’s portrayal of Ip Man is atypical compared to the majority of action films, but it perfectly reflects a key philosophy of the real Ip Man’s pupil Bruce Lee: “Be water, my friend.” Within that philosophy, Lee expressed the idea of finding serenity through flexibility, applying that conceit to both combat and everyday life. Lee posited in ENTER THE DRAGON the idea of “fighting without fighting” and despite only learning the Wing Chun fighting style a few months before filming IP MAN, his performance as Ip Man goes beyond impressive physical feats, but shows a sense of screen presence and confidence rarely seen on the big screen. Yen can express so much purely through movement, perfectly embodying the philosophies of both Bruce Lee and Ip Man.

While his career in the U.S. may currently be relegated to secondary roles (including the upcoming XXX: THE RETURN OF XANDER CAGE), hopefully, Yen can find enough success to lead a major motion picture in America and find the same success here as he has found in other countries. His breakout performance in ROGUE ONE shows that American audiences want to see a new type of action hero. With that new level of clout, Yen can bring the same kind of thoughtful and philosophical action to American cinema as he did in films like IP MAN. As this trilogy proves, Yen is more than capable of changing the way action is conveyed in cinema both physically and philosophically.