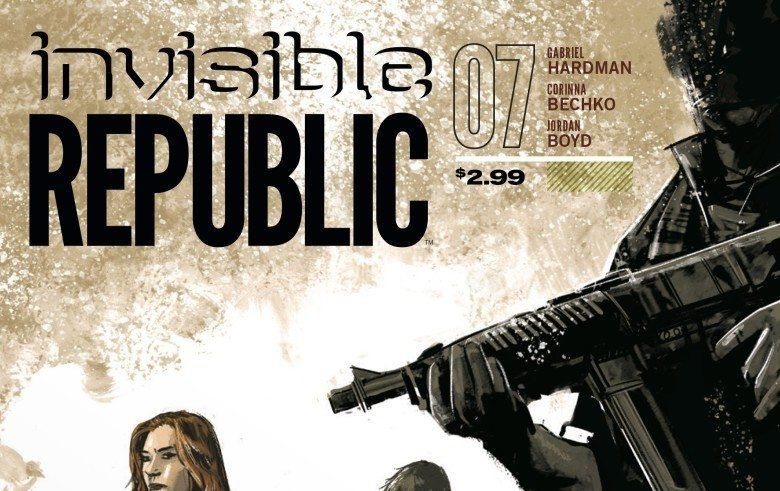 That’s what drew me into the book in the first place, and husband-and-wife creative duo Gabriel Hardman and Corinna Bechko continue to extract strong material as the story unfolds.

LISTEN: Want to learn about more awesome Image Comics? We interviewed artist and co-creator of INJECTION, Declan Shalvey, on the ComicsVerse podcast!

Issue #7 feels like a transition issue as we continue forward with Maia’s narrative(s). Her relationship with Nica takes centerstage in both stories: in the past, we see an uncomfortable ladies’ day out and begin to understand the interpersonal dynamics within the revolutionary movement; in the future, their tense relationship seems to be coming full-circle, as Nica’s soldiers attempt to lay siege to Maia’s base.

The location of narration continues to migrate, it seems, from Babb to Maia, a welcome development for now. The story began with Babb discovering Maia’s journal and alternatively reading it and trying to figure out what to do with it. For me, the journalistic framing of the story worked as an introduction, but it isn’t as helpful now that Maia is the focus of the action in both timelines. Babb has his moment in issue #7, but for the sake of moving the main action forward, I’m glad the reporting angle has taken a backseat for the time being.

If INVISIBLE REPUBLIC has anything working against it, it’s pacing. World-building can be tough sledding, especially when the creative team takes on a dual-arc structure. This is a particularly complex world, too: alternatively set in 2801 and 2843, the book is a political thriller more than a sci-fi story. The double narrative has allowed for some dramatic moments that would have taken far longer to build up in a chronological story, but it feels like Hardman and Bechko are still setting the table.

READ: In the mood for something different? Check out our review of Amy Reeder’s MOON GIRL AND DEVIL DINOSAUR #1!

Of course, this isn’t a short-run book—Hardman has said he’s hoping for 50 issues—so we have some time. I’ll be most interested to see how Hardman and Bechko move the revolution forward. We already know that it presents Avalon (now Maidstone) with another dictatorship (that eventually falls), but the dual stories of the rebellion and Maia’s eventual return present some potentially fruitful territory for exploration.

One of the worst things that can happen to a narrative is for the premise to tell the whole story. As an example, consider the Transformers series: Kid gets a car, it’s a robot, and there are bad robots, too. Hilarity ensues. Fortunately, INVISIBLE REPUBLIC has easily cleared that hurdle with character development and narrative complexity. This continues to be a series to watch.