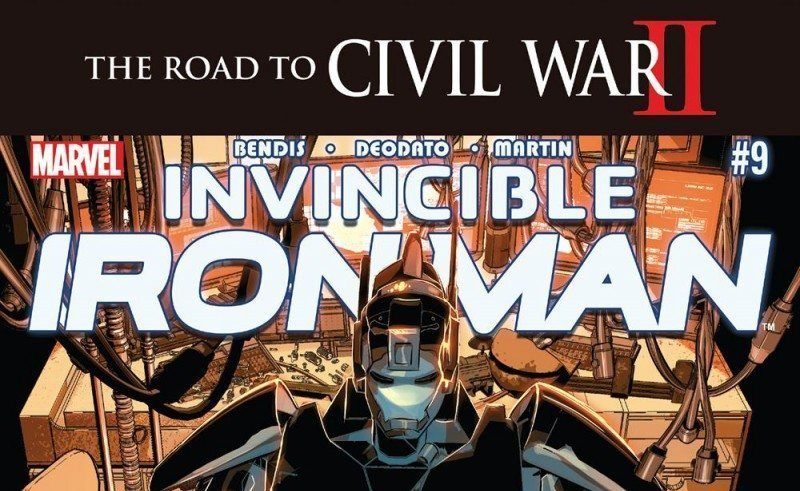 Where’s Tony Stark? That’s the question that the world is asking after Tony’s battle with Tomoe, alongside War Machine and Spider-Man, an explosion in a warehouse where Rhodey was being held occurred. Now, fast forward four weeks later and everyone’s starting to question if he’s even alive. On top of all that, Doctor Doom returns and has his sights set on Doctor Amara. Has Doom really turned over a new leaf, or is this a part of some devious plan? While Doom searches for Tony a new Iron Man, or Iron Girl I should say, enters the scene and nobody knows what her intentions are. Meanwhile, Friday has been running STARK industries in Tony’s absence. Read carefully because there’s a lot going on in this week’s issue of the INVINCIBLE IRON MAN that you won’t want to miss!

I felt that this issue was necessary. Necessary because we needed a brake from all of the mayhem that follows Tony everywhere he goes. This issue of the INVINCIBLE IRON MAN focuses on the people that are connected, in one way or another, with the Iron Man himself, such as Rhodey, Amara, Friday, Doctor Doom and Riri. Some of these people are looking for Tony while others are taking advantage of his recent disappearance. With Tony gone, this gives Doctor Doom a chance to get closer to Amara, while a 15 year old M.I.T. student builds herself an Iron Man suit to to possibly take Tony’s place. While this is happening, Friday is managing STARK industries, and Rhodey continues to search for Tony. The most interesting thing I found in this issue, however, was the introduction of a possibly new Iron Man, Riri. 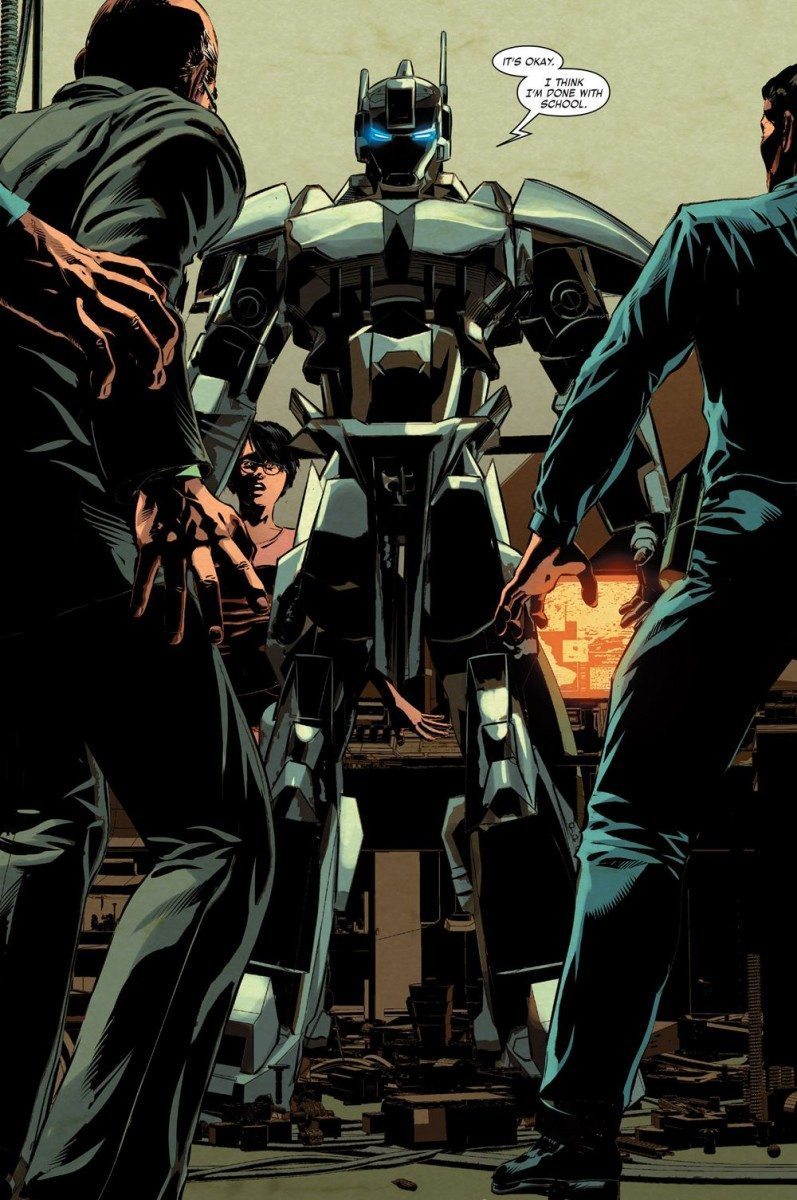 The cover introduces a new hero, who doesn’t have a super hero name yet but goes by the name of Riri. She was introduced briefly in issue 7 and is touched upon a little bit more in this week’s issue. She’s 15 years old and attends Stanford University. Talk about a genius child. It’s still too soon to tell what Riri will do with her Iron Man suit, but one thing is for certain, she’s way too smart for college.

Moving on, it’s been a while since we’ve seen Doctor Doom. Last we saw him was when Tony and Amara were having breakfast in a diner a few issues back. Tony had told Doom to stay away from Amara but to no avail. Doom is seeking out Tony once more but even he can’t find him. And if Doom can’t find him, then who could? So, he seeks out Amara hoping that she has any leads, but something tells me he’s there for another reason. Could it have to do with the fact she found a cure for mutants but never released the information to the public? Whatever Doom’s planning, it can’t be good.

Comic book artists Mike Deodato (STAR WARS: VADER DOWN, GUARDIANS OF KNOWHERE and AVENGERS: TIME RUNS OUT) and Frank Martin (EAST OF WEST, NEW AVENGERS and THUNDERBOLTS) combine their talents to bring a very surreal art style to the INVINCIBLE IRON MAN series. Both artists started on the series back in issue 6 taking over from former artists Justin Ponsor and David Marquez.  Although the art was good, I felt that it was lacking for this issue. When I think of Iron Man I think of those bright red and yellow colors, but instead I was treated to darker color tones shown throughout the story, even during a scene portraying the daytime. Overall, it felt a little too dark for me. 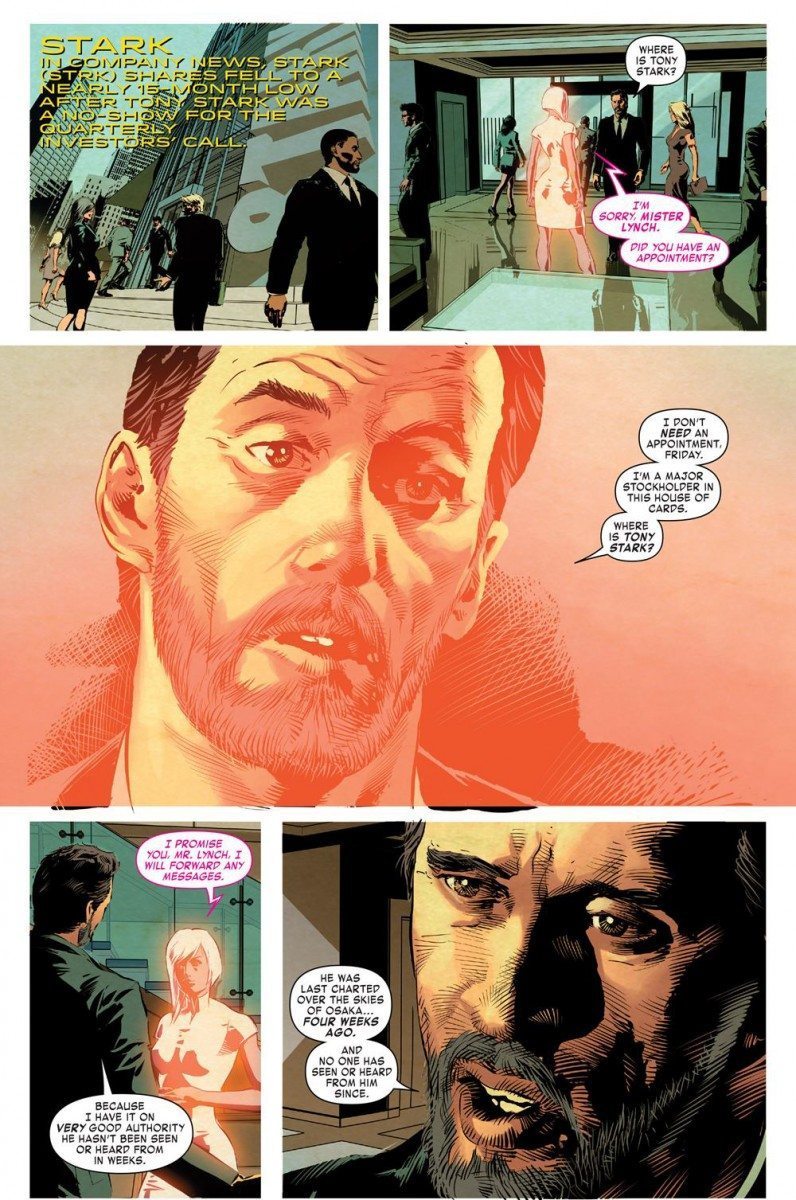 Writer Brian Michael Bendis packs this issue with a ton of content that will have you wondering how all of these characters and their problems are connected. He continues to keep the series moving even in issues that have little to no action. He also does a great job of keeping my mind elsewhere while leading me toward the answer to my original question, which is, where’s Tony? For example, he throws multiple problems at the reader which involve Tony’s company, this new Iron Girl, and Doom’s return. He does this all while sneaking in each individuals own problems, who have some sort of connection to Tony Stark. This shows how much of a resourceful writer Bendis is by drawing on other elements besides the big one that readers are always looking for, action.  This method of writing kept my eyes glued to the book without distraction.

READ: With Mary Jane now working alongside Iron Man, how does her ex-boyfriend and current boss’s competitor feel about her working so close with the genius billionaire playboy philanthropist?

So, what do you think became of Tony Stark? Is he dead? In hiding? Will he return before more people learn that Friday is running the company? What is Doctor Doom planning? Let us know in the comments below!