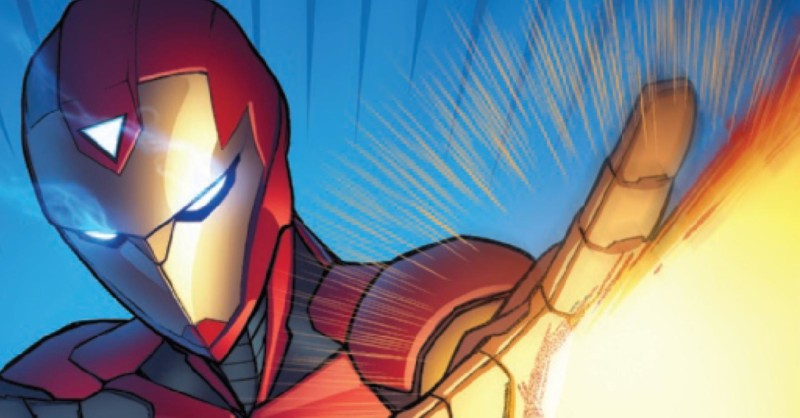 Imagine being fifteen years old and everything just clicks one day: you’re offered your dream job, your school provides resources for your projects, and the cool kids ask you to hang out. That’s basically the plot of INVINCIBLE IRON MAN #6, as Riri Williams finds herself with too many choices.

INVINCIBLE IRON MAN #6: The Human Side of the Armor

The issue begins with Riri inside Stark Industries, all but drooling over the collection of Iron Man suits on display. However, Maria Stark pulls her away (just as Riri begins to list the history of the Silver Centurion armor) to make an offer. Since Pepper can’t be Rescue full-time and the world needs an Iron Man, Maria offers Riri use of the lab as a base. She reacts… well, just as you would expect a worshiper of Tony Stark to react.

Watching Riri’s reaction here is a highlight. Writer Brian Michael Bendis continues to make Riri relatable as she advances her way through the superhero world (though her fangirl behavior is a tad reminiscent of Ms. Marvel). Yet the story balances that with her admittance that none of what’s happened to her really seems real. In fact, Riri doesn’t even give an answer. This is a smart touch, as it keeps Riri grounded, even though she is given the keys to Tony Stark’s playground. It doesn’t get more human than that.

READ: Is diversity really a sales issue for Marvel? We don’t think so!

However, this is only the first step of the journey, as Riri’s good fortune continues when she comes home. Despite Riri having stolen resources from M.I.T. for her Ironheart suit, a representative of M.I.T. is present at her home.  However, the representative is offering to provide Riri with resources and funding. Again, Bendis keeps Ironheart human, as Riri doesn’t give an answer to this offer either. The next time we see Riri, she’s in the Ironheart suit, looking for anything to take her mind off the events that have occurred. Her Tony Stark A.I. notes this, and voices that she’s having a minor anxiety attack. It’s a testament to Bendis’ work that he keeps the human element of the story as the most gripping part, even as Ironheart has a minor battle with the Armadillo (before yet another offer, this time for Riri to join the Champions).

Even Without Armor, the Artwork Shines in the Secondary Latveria Story

The only problem with Bendis’ storytelling is that artist Stefano Caselli doesn’t shine in Riri’s story. His work is still solid, but the emotional aspect is the main focus. However, INVINCIBLE IRON MAN #6 does have a separate story for Caselli to show his talents.  That story? An impending takeover of Latveria. Caselli paints a late night meeting in Paris, then the ruins of a post-Doctor Doom Latveria. His work not only recalls the classic designs of Latveria, but show how far the downfall has gone. Plants have overgrown a town square, and bullet holes can be seen in the buildings. It shows the stakes are high here. They only grow higher as Lucia Von Bardas emerges, promising to make Latveria a world power again.

READ: How has Latveria changed? Find out from INFAMOUS IRON MAN #4!

INVINCIBLE IRON MAN #6 balances two major stories: one personal, one political. Riri Williams may only be six issues in, but she’s clearly got big things coming her way. Yet this is still a fifteen-year-old kid. Tony Stark would have likely taken both offers, then created A.I.s of himself to do research so he could fight with the Champions. Riri isn’t Tony, and how she will handle these new opportunities is unknown.  Yet it’s enough of a question to draw readers like myself back for more. INVINCIBLE IRON MAN #6 continues to build on character, even as bigger forces loom in the background.

Though maybe joining a super team like the Champions would help with that? God knows I’d love to see Riri and Kamala Khan together on a monthly basis.