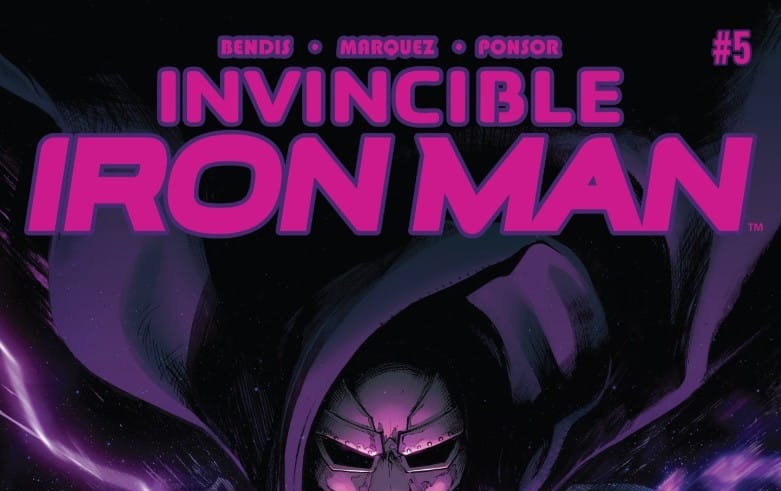 INVINCIBLE IRON MAN #5 is a must-read. Words can’t describe how beautifully detailed the artwork is and how riveting the story can be. In this week’s issue, Iron Man and Doctor Doom come face to face with Madame Masque at the Jackpot nightclub in Chicago run by none other than the beautiful Ms. Mary Jane Watson.

In this new Iron Man series, we see more of a funny side to Tony Stark. That’s not to say that he hasn’t been funny, but more than usual lately. It’s almost as if he’s trying to become the next Spider-Man, and at first, I didn’t know how I felt about that. A funny Iron Man? I soon realized how much I loved it because of how much I love Spider-Man. If you like the way Robert Downey Jr. portrays Tony Stark/Iron Man in the movies, then you will love the comic book version. From the looks of the cover you would think that at first, SPOILER ALERT, it was only a matter of time before Dr. Doom would become evil again. But you couldn’t be more wrong. The cover is deceiving, and upon reading the comic, it’s more false then you would think. So then why do a cover that has nothing to do with the story? I think that the cover is more of a metaphor than it is foreshadowing. You’ll just have to read it to find out.

READ: Want to get the whole story? Go back to the beginning with our review of INVINCIBLE IRON MAN #1

The writer of the series so far, and hopefully will be for a long time, is none other then Brian Michael Bendis. Bendis is credited with creating THE ULTIMATE SPIDER-MAN: MILES MORALES, BATTLEWORLD: OLD MAN LOGAN, AVENGERS VS X-MEN, HOUSE OF M, and much more. So far the series has been off to a great start by adding a well-concentrated blend of action, adventure, romance and even comedy. I think that by making Tony Stark somewhat of a funny man was definitely a good move on Bendis’ part. For people who are just starting to read comics today because of the movies that Hollywood is putting out, they are most likely expecting the characters in the comics to be similar to the ones in the movies. Since Robert Downey Jr. portrays Tony Stark as a “funny man” readers will be expecting that in the comics. 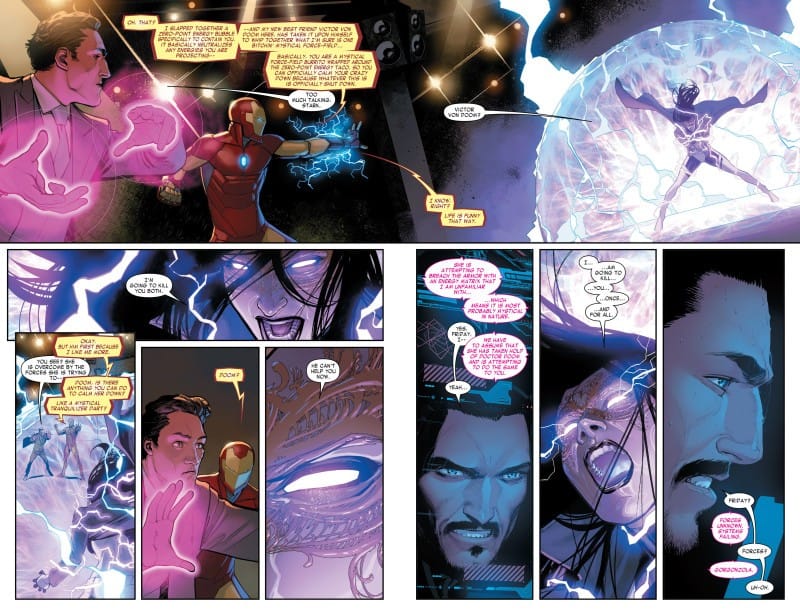 The artists who have been here as long as Bendis in the series are David Marquez and Justin Ponsor. I’m not familiar with Marquez’s work, but I have to say, wow. I’m just amazed at how beautifully detailed these drawing are. He is able to capture his characters emotions and doesn’t miss a thing. You can see the most detail when it comes to a characters facial expression. I urge you to look over this book twice to really take into account the hard work that this artist puts into this book. Let’s not forget Mr. Ponsor, a spectacular artist who does the colors for this series. I’ve followed Ponsors work for a while now and first came across him during the Death of Wolverine series. His use of color as seen in INVINCIBLE IRON MAN shows the different tones of yellows and reds being used are spectacular. He really knows how to capture the color of a character in all different types of settings.

My overall review of this issue is a definite thumb up for the detailed designs and witty sense of humor given to the characters. I highly recommend this book for anyone looking to break into comics today or for anyone who appreciates great comic book art or witty stories.