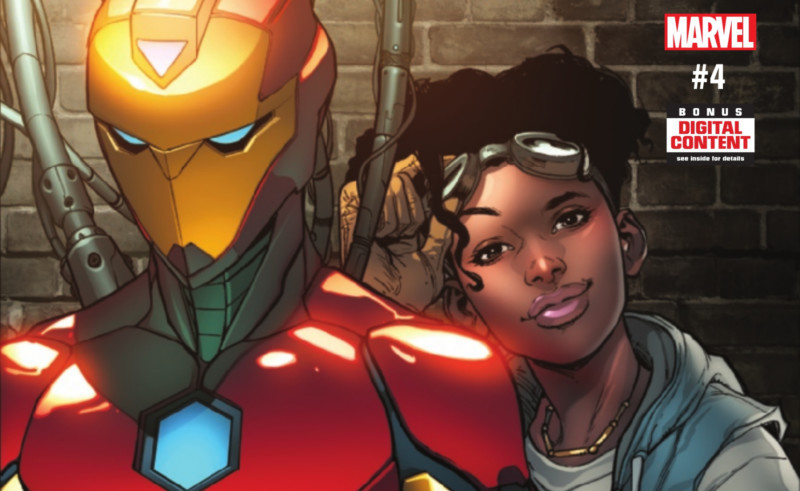 INVINCIBLE IRON MAN #4 continues last issue’s cliffhanger with an action-packed team up between Riri Williams and Pepper Potts, facing an army of light-saber wielding ninjas and Tomoe, the Techno-Golem (who is piloting a combined version of the Ironheart and Rescue armors). While this might be another chapter in a much bigger story, it’s still a lot of fun.

This was my first time reading about Riri Williams since her inception into the Marvel Universe, and I can’t recommend it enough. In fact, this issue would be a great starting point for anyone that still hasn’t seen her in action yet. Granted, we mostly see her without her armor, but that allows her character to shine through, especially in her dialogue with Pepper. The issue’s intro makes it clear Riri has tremendous respect for Pepper, but being stranded without her armor and facing a life or death situation doesn’t give her much chance to show it. The fact that she doesn’t know much about armor-less fighting doesn’t help either.

Despite the terrible odds, Pepper does manage to hold her own against the ninjas, as she tries to help Riri escape. Riri isn’t thrilled with the idea of leaving Pepper alone but knows she can’t add much, so she attempts to follow the plan. Stefano Caselli’s art shines here as the dialogue takes a backseat to intense action that not only elevates the high stakes but also gives Pepper the chance to be a total badass. She kicks and punches her way through an army of tech ninjas with electrics swords, even throws them into laser-fire and barely gets a scratch. Her moves are impressive but still look like an actual fighting style. It adds to the grittiness of the scene and keeps the stakes high, which gives Pepper plenty of reason to try and force Riri to run away. 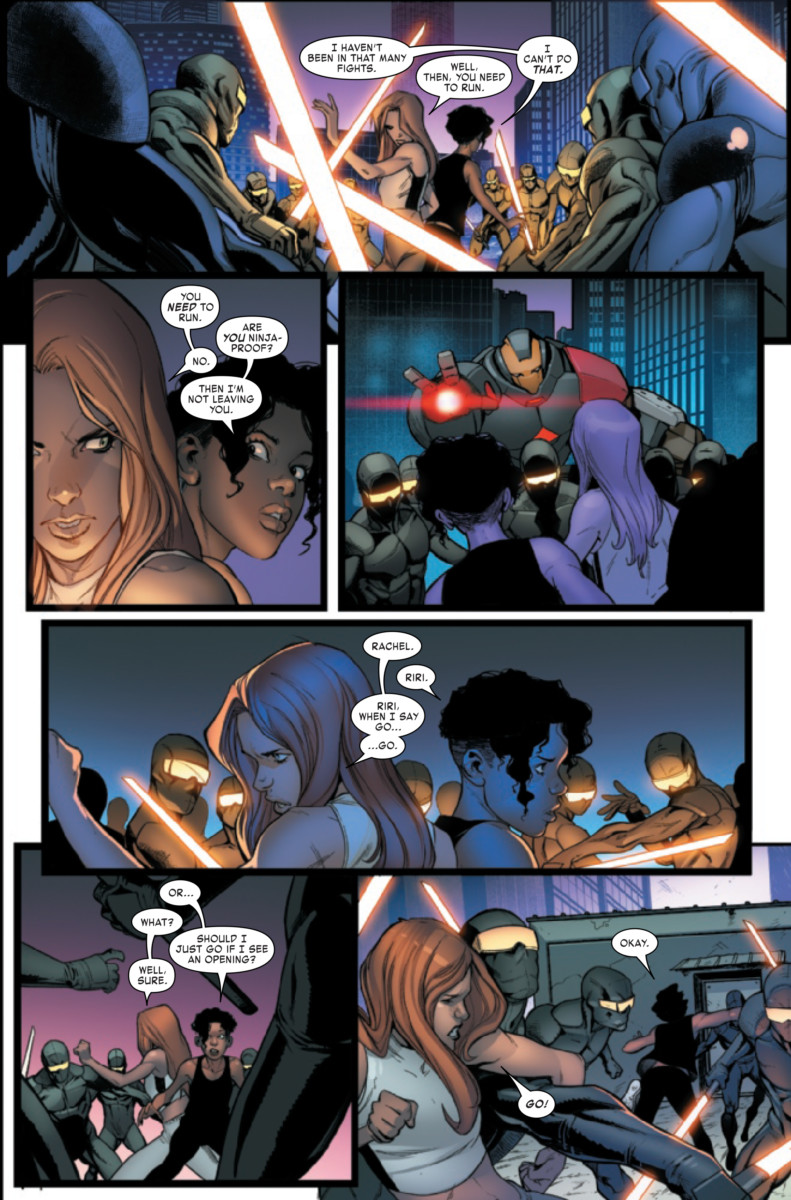 Still, Riri can’t resist a chance to help out, which doesn’t end well. However, this does allow Riri to use her best asset (her mind) when she commandeers a laptop and uses it to summon the digital essence of Tony Stark. While it might not seem awesome on its face, Brian Michael Bendis’s strong writing helps turn this entire issue into a great showing for Riri. She demonstrates courage in the face of danger, a wry sense of humor, and the ability to turn even the most unlikely situation to her advantage. It’s a great way for new readers (like me) to see Riri’s personality and how well she can use her assets. It’s also nice to see Marvel showcasing a young non-white female superhero that isn’t Kamala Khan (who is great, but we all know shouldn’t be the only example in comics!).

READ: Want to see more of Riri’s adventures so far? Check out our review of Riri’s introduction in INVINCIBLE IRON MAN #1!

Sadly, Tony’s soul doesn’t have a super anti-virus for Tomoe, but he does have enough of an idea for one that Riri can start working on it. Meanwhile, Pepper is finally overwhelmed by the ninjas and brought before Tomoe, who gives some vague villain dialogue that doesn’t shed much light on the greater plan. However, Pepper recovers enough for one last awesome action scene, just as an extra suit of Iron Man armor arrives. Unfortunately, Tomoe absorbs it but that appears to have been Riri’s plan. Whether or not it worked is up for debate; however, the issue’s promise of a huge Techno-Golem beatdown in the next one does leave lots of great possibilities wide open.

READ: Curious about Tomoe? See how she was taken down last time in INVINCIBLE IRON MAN #11

INVINCIBLE IRON MAN #4 is an exciting entry that entertains and enthralls. Watching Pepper take down multiple foes minus her armor is simply inspiring, and Riri gets plenty of time to show off her own skills. The fact that it’s an entire issue about two women battling insurmountable foes (and yes, Tony’s there, but he mostly enables Riri’s plan) is a great touch as well. Even if you haven’t read Riri’s adventures so far, this issue is an excellent way to get into her world.

I know I’m coming back next month.