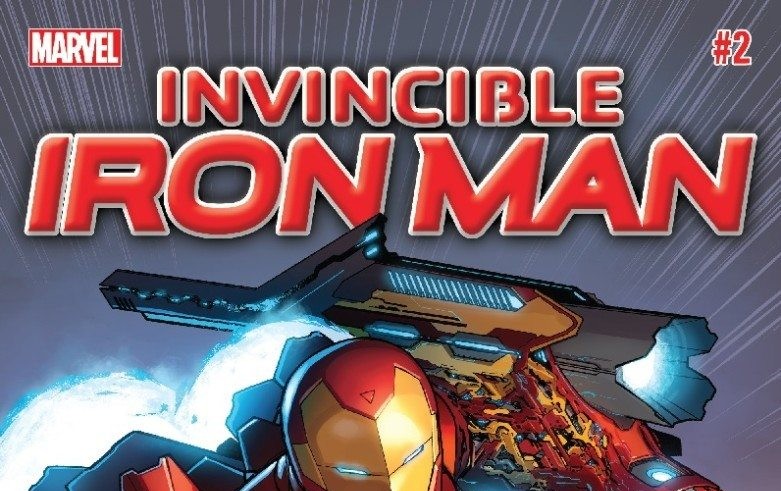 The flagship of Marvel’s “All-New, All-Different” initiative continues with INVINCIBLE IRON MAN #2, from the creative super-team of Brian Michael Bendis and David Marquez. Also continuing here is Marvel’s trend of blending elements of its comics book heroes with their Cinematic Universe counterparts. But just how well can they hope to balance those elements in what is supposed to be a fresh beginning for the new Marvel Universe? Let’s jump in and see!

Picking up after #1’s last-page revelation, Tony Stark is face-to-face with none other than Victor Von Doom himself. After something of a tussle between tech and magic, Stark is made aware of a series of heists performed by the trigger-happy Madam Masque. I’ll not spoil here how Masque and Doom are connected, nor what about Doom’s presence is such a surprise. I’ll just say there’s action, humor, tech and magic: all the things readers have come to expect from Marvel of late, and delivered by a creative team I believe was born for this book.

READ: Our review of RADIOACTIVE SPIDER-GWEN #1, another All-New title!

Brian Michael Bendis is in my mind the most obvious choice for penning the adventures of Marvel’s sarcastic golden boy. So obvious, in fact, that I honestly wonder why it hasn’t happened much before now. Yes, Bendis has written Tony Stark as part of various Avengers teams, but never as a solo character. Now I have before me all the proof I’ll ever need that ol’ Shellhead’s fans have been missing out all this time. Stark’s signature wit and sarcasm are all present, as well as a newfound sense of self-awareness, and all with shades of Robert Downey Jr’s on-screen persona for good measure. We’re even given the inner-helmet view popularized by the IRON MAN and AVENGERS films.

READ: Have Another Taste of All-New, All-Different Marvel with our reivew of UNCANNY AVENGERS #!

Artist David Marquez, while far from a newcomer to the world of comics, is a relative unknown to me. Marquez has worked with Bendis before on ULTIMATE SPIDER-MAN and ALL-NEW X-MEN, books I’d not read during their time in publication. I mention this to emphasize the out-of-left-field nature of his work on INVINCIBLE IRON MAN, because after only two issues the man has impressed the hell out of me. I feel confident in saying that if Marquez isn’t a fan-favorite artist already he certainly will be by the time he’s done with the Armored Avenger. His clean lines and expressive characters are enough to impress, let alone how masterfully he handles the complex nature of the new armor’s transformations. Complete with excellent color work by Justin Ponsor, very few can deny this Iron Man title is simply gorgeous.

INVINCIBLE IRON MAN #2 hits all the right notes and is sure to please fans of both the comics and films alike. And with a plot unlike anything I’ve seen the playboy-industrialist-billionaire take part in, the book also lives up to the “All-New, All-Different” hype.

Now if you’ll excuse me, I’m suddenly compelled to rock out with some AC/DC . . .

CHECK OUT MORE ARTICLES FROM COMICSVERSE!