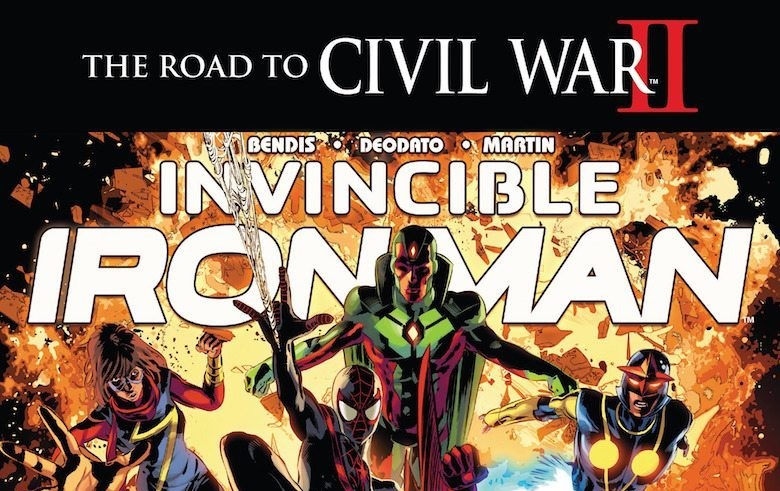 INVINCIBLE IRON MAN #11 is essentially a conclusion to the story arc that finishes three separate storylines within the overall narrative. The issue rushes to end this story arc and that does not make for a satisfying conclusion. However, there is a bright spot with the art, which sets a pleasant dark tone for the issue.

Previously, in issue #10, Tony Stark went undercover to infiltrate Tomoe and her ninja clan. Tomoe’s ability to control technology places her and Tony in natural opposition. While Stark was in Japan, his company suffered and Stark Industries’ board of directors were ready to declare Tony dead. As a result, Friday requested the assistance of Mary Jane Watson.

INVINCIBLE IRON MAN #11 begins with the Stark Industries’ board of directors barging into Tony’s lab demanding to be let in. They want to take control of the company with Tony absent. However, they run into Friday and Mary Jane. Meanwhile, Riri Williams continues to test her own Iron Man armor after reverse engineering some of Tony’s older suits in the last issue. As for the title character, Tony gets some unwanted help from a War Machine-led Avengers team. 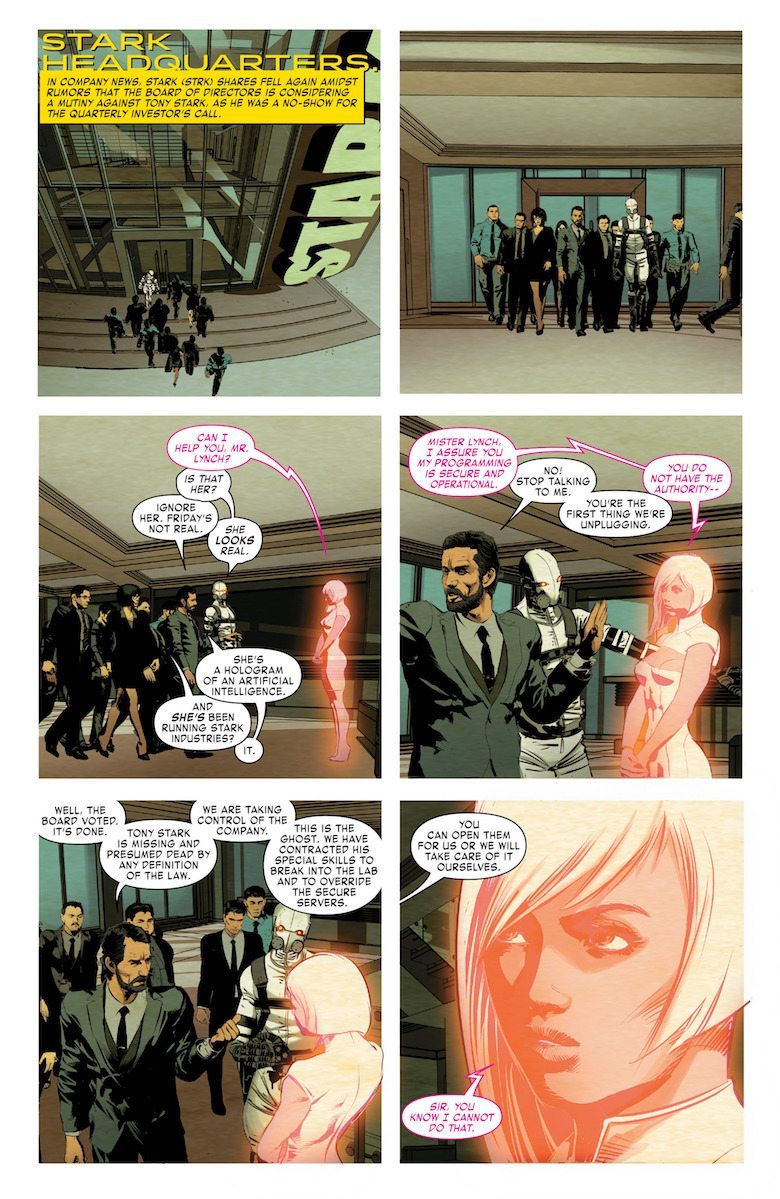 This concluding issue is a bit disappointing. The storyline with Tomoe remains inconclusive and that’s a problem for the series that spent so much time on her as a villain. She was built up to be a worthy foe for Iron Man and not seeing a head to head matchup robs readers of a fitting end. Also, the intervention from the Avengers diminishes Tony’s story as an undercover agent. He doesn’t get to take down the ninja clan from within as he planned. However, not all is lost in INVINCIBLE IRON MAN #11. Mary Jane plays a bigger role in the series than I previously thought she would and may continue to play a larger role going forward.

INVINCIBLE IRON MAN #11 develops Tony well even though his plan doesn’t go… as planned. Brian Michael Bendis reminds us that Tony Stark is still a narcissist and entertaining as ever. He wants to do take down Tomoe himself and when the Avengers don’t do everything right, he lets them know it.

I would have liked to see more characterization with Mary Jane Watson and Riri Williams. Despite her bigger role, there is not much reasoning given for Mary Jane’s role in the company as Tony’s representative. I wish Mary Jane had a clear motivation for her to get her on board. As for Riri, she only gets a few panels to show off her skills with an Iron Man suit. She is set to become the new Iron Man somewhere down the line, so I am surprised to see so little of her in the issue. 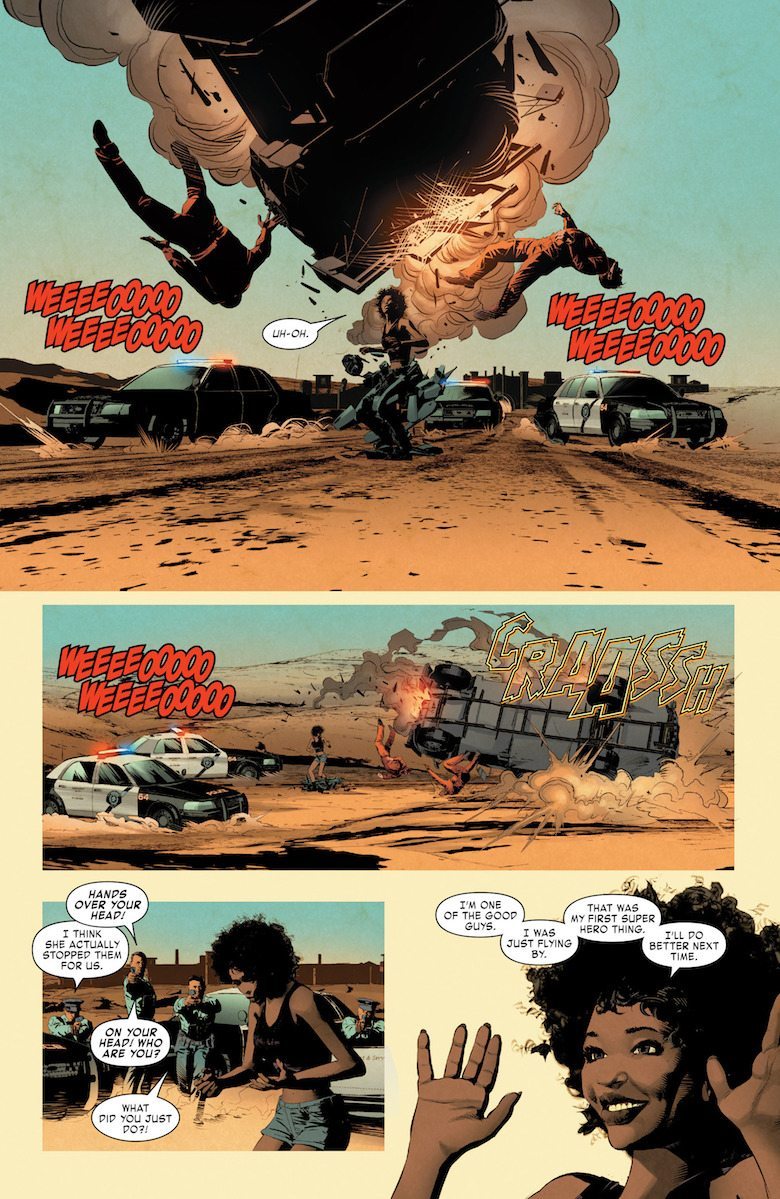 Mike Deodato’s art remains gritty and dark like it has been in the previous issues of INVINCIBLE IRON MAN. The dark tones and shades emphasize Tony’s unused lab as well as Tony’s exploration of espionage. When Tony and Rhodes meet in a bathroom to discuss the mission, the darkness gives off a seedy and ominous feel to the panels. Also, the action sequences are impressive. They look extremely grand and powerful with a lot of detail (especially with the explosions). 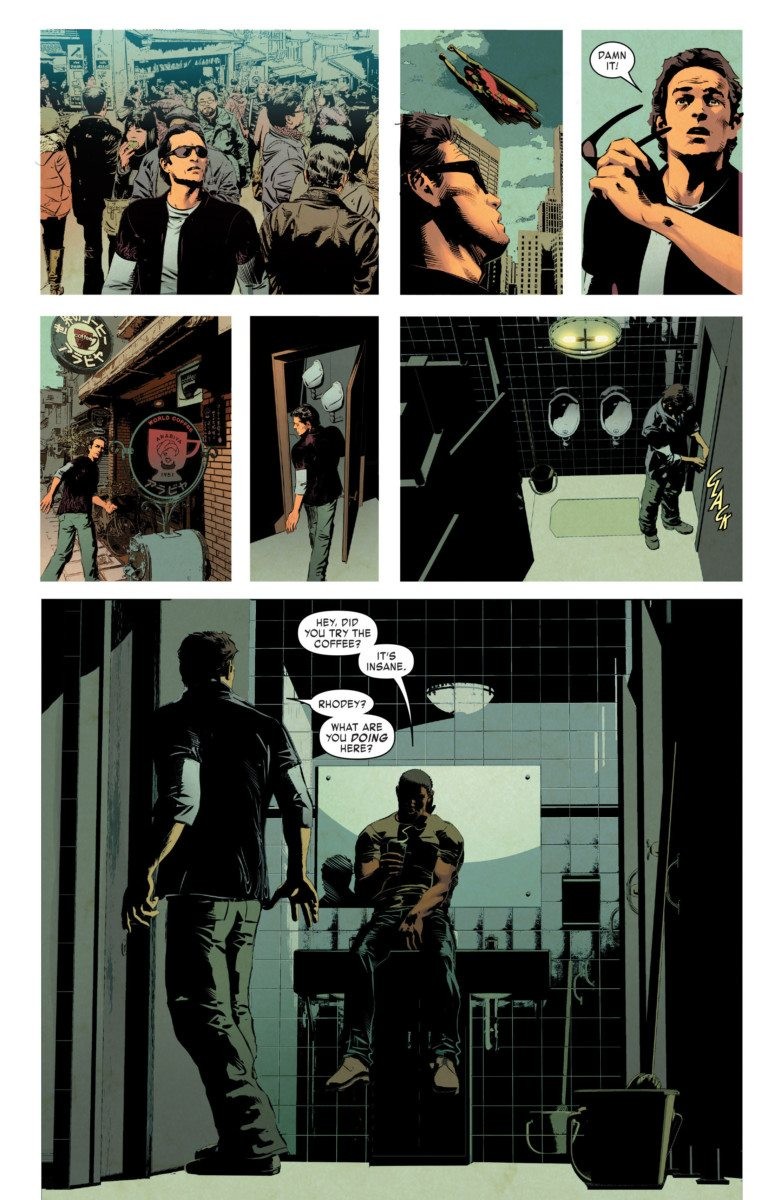 Though the story has some letdowns in the issue, the art makes the INVINCIBLE IRON MAN #11 worth a read. The story could have used another issue to develop the end of the arc a bit better. Instead, the issue feels rushed to get to the aftermath of Marvel’s CIVIL WAR II. I look forward to seeing what roles Tomoe, Mary Jane, and Riri play going forward in the series. Bendis leaves the door open for a number of strong possibilities.