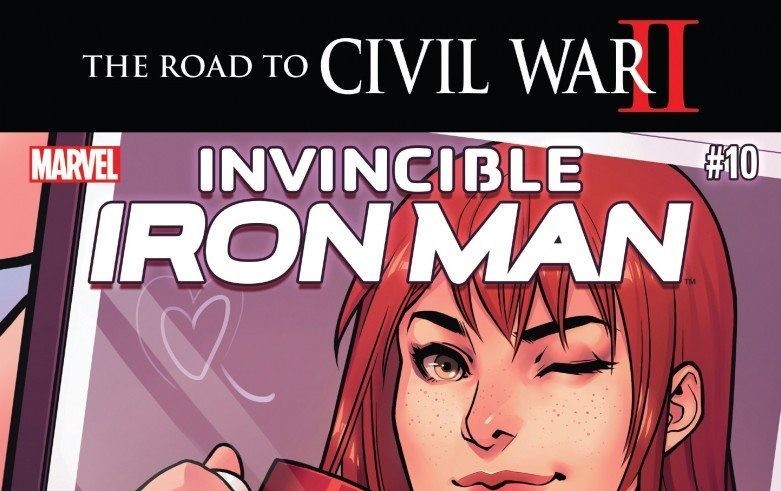 INVINCIBLE IRON MAN #10 continues the storyline with Tomoe and the ninja clan. With Tony Stark presumed dead, things start to spiral out of control. This issue presents a strong storyline for Tony as we find out what really happened to him in Japan, and it is supported by some fitting art. It is so strong that the subplots feel distracting from Tony’s storyline.

In INVINCIBLE IRON MAN #9, we left off with Rhodes and Tony meeting up in Tony’s apartment and discussing the raid on Yukio’s club. We learn, though, that Tony was in disguise and was the one who attacked Rhodes in order to save Yukio. This was all a set-up in an attempt for Tony to infiltrate the ninja clan, who were tracking down Madam Masque and trying to kill Tony, Rhodes, and Spider-Man.

INVINCIBLE IRON MAN #10 comes back right after the events of issue #9. The majority of the issue focuses on the beginning of Tony’s journey as an undercover agent. Instead of brawling it out with Tomoe, Tony shows off his intelligence in more ways than just building something as an answer. As we found out in INVINCIBLE IRON MAN #8, Tomoe has the ability to control technology, so Tony knows that he can’t just blast his way out of this one. Instead, he needs to figure out her weaknesses without wearing the red and yellow. I like seeing Stark break away from his usual armored adventures like this (even though his new Iron Man suit in this series is awesome). It adds more depth to Tony as a character who is willing to face danger without the protection of his weapons and suit. Also, it shows off the hand-to-hand combat skills that he wouldn’t necessarily need in the Iron Man suit.

Brian Michael Bendis continues the fun humor in this issue. Even with the biotech mask as a disguise, Bendis keeps Tony’s personality with his sarcastic and witty jokes. The more serious the enemy gets, the stronger Stark’s humor becomes. Fortunately for us, ninjas are very serious. The highlight of the humor actually comes from these ninjas. They want to cover Tony’s head to transport him to Tomoe, but instead of using the usual black hood, they cover his head with a Spider-Man mask! 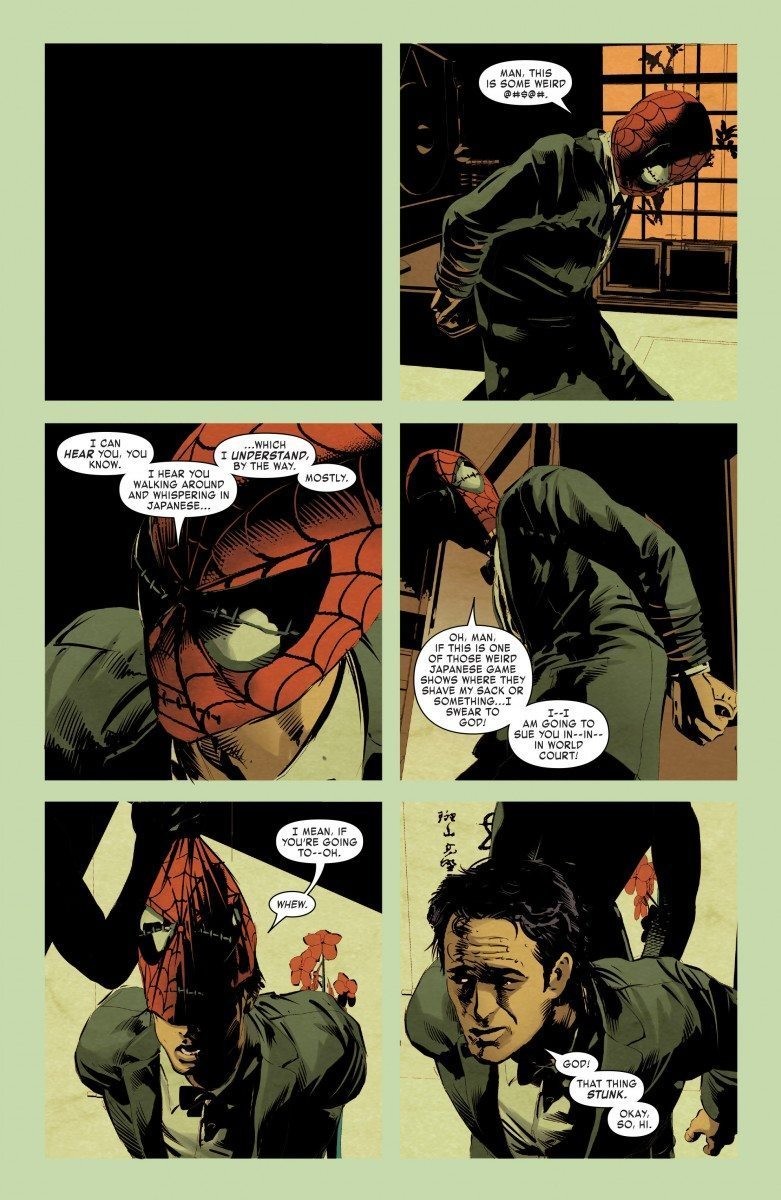 The story is not without its faults. The subplots, for instance, are becoming a bit tedious in the series. There are several characters who are currently on their own paths, like Mary Jane Watson and Riri, and it feels like they are getting more panels than necessary. For example, several pages show Mary Jane walking down the streets of New York City and arriving at her apartment. It doesn’t seem necessary in this issue, and without it, Bendis could’ve used the extra panels to add more to Tony’s main plot.

Mike Deodato’s art is pretty incredible in this issue. There is a darkness to his work here, and it adds to the espionage feel to the story. This is especially true for the panels where Tony is with the ninjas in his apartment and where Tony is meeting with Tomoe in an undisclosed location. Though there are not many action sequences in INVINCIBLE IRON MAN #10, there is one sequence where Stark is fighting several ninjas, and it’s spectacular. Here, he proves himself worthy to Tomoe as he counters a flurry of ninja attacks and laser swords throughout the panels. 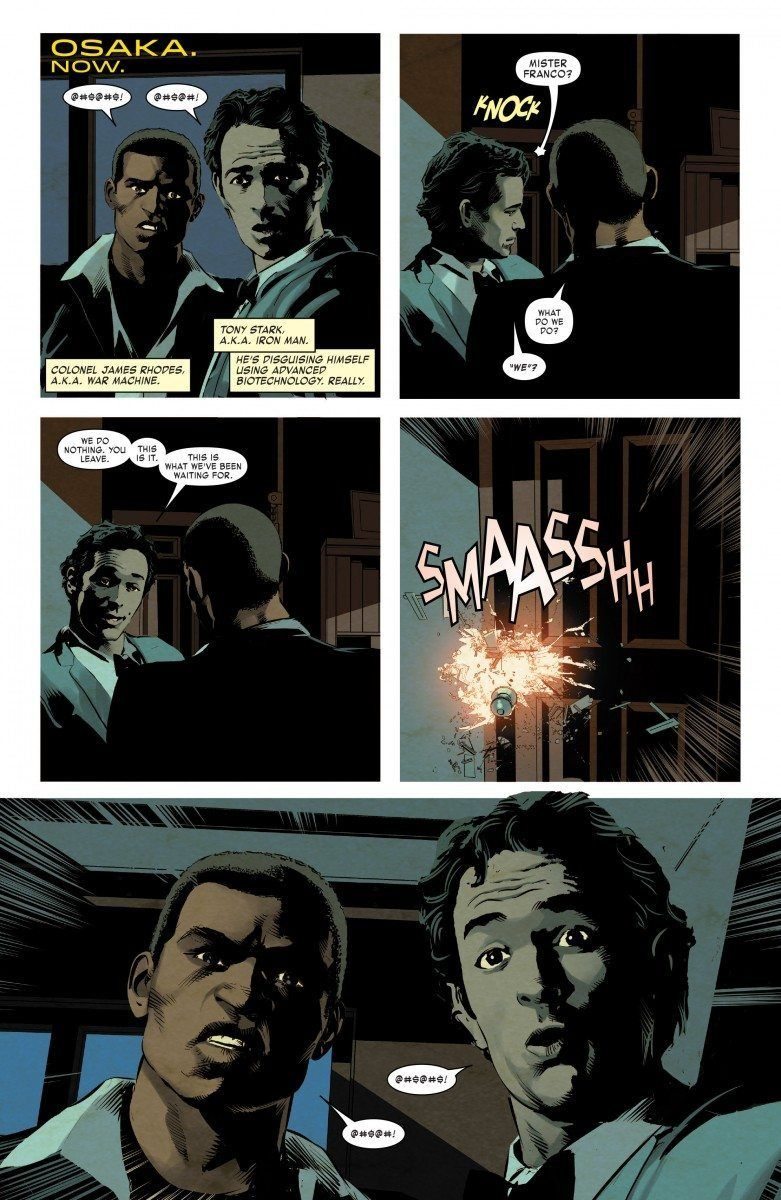 INVINCIBLE IRON MAN #10 feels more like a start to Tony’s journey infiltrating Tomoe’s ninja clan rather than an end to the story in Japan . Going forward, I hope Bendis sticks to this direction and focuses mainly on Tony rather than the subplots of Riri and Mary Jane. Though their stories may come into play later on, they seem to distract from Tony’s main plot too much. We will have to wait and see next month.