Earlier this year, Marvel announced that a young black girl would be assuming the lead role in INVINCIBLE IRON MAN’s MARVEL NOW! relaunch. Of course, the internet exploded. Fans were seemingly split down the middle. And while a large number of fans voiced their excitement and support for a black teen to be helming one of Marvel’s most successful franchises, others were completely outraged at the fact that Tony Stark would not retain the mantle. It seems that we’ll have to wait until the end of CIVIL WAR II to see just what happened to Tony Stark. However, INVINCIBLE IRON MAN #1 confirms fan speculation that, at least for now, he will not be appearing in MARVEL NOW!. Luckily, fifteen-year-old MIT student Riri Williams has donned a suit of armor of her own creation, taking to the skies and the streets in the name of making the world she loves a better place for all its inhabitants.

LISTEN: For deeper insight into one of the most iconic black superheroes, listen to our podcast on Storm!

Tony’s absence is solidified very early on in INVINCIBLE IRON MAN #1, as Riri simultaneously celebrates her new role as an armored hero while lamenting the loss of her scientific idol and mentor. INVINCIBLE IRON MAN #1 reveals a great deal about Riri’s childhood. The issue opens with an elementary school principal telling the parents of a five year old Riri Williams that she is a super-genius, already smarter than most well-educated adults. For the majority of its length, INVINCIBLE IRON MAN #1 alternates between the fifteen-year-old’s fight with the villainous mutant, Animax, and glimpses into Riri’s upbringing in Chicago. These interludes allow the reader to trace the steps that led the precocious five-year-old we see at the beginning of the issue to develop into Marvel’s newest armored hero. 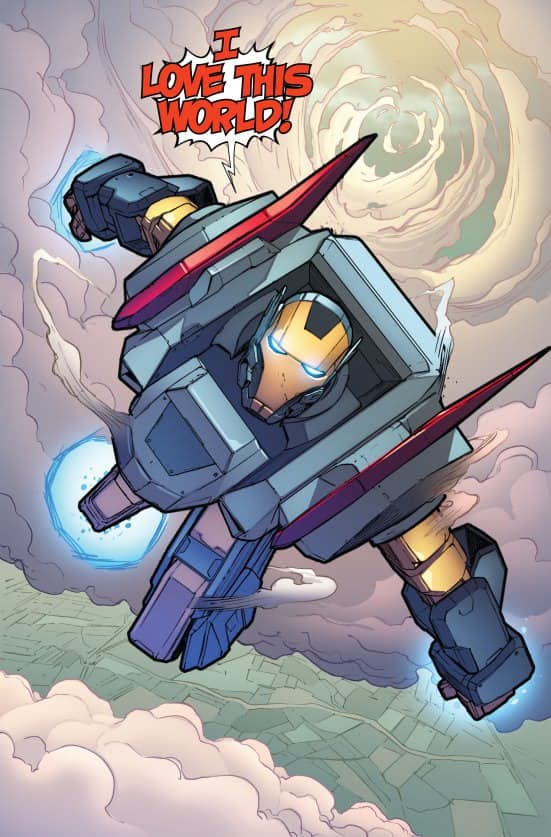 Though Riri has been making appearances since the last arc of the last INVINCIBLE IRON MAN run, as well as in CIVIL WAR II, this, the first issue of her own title, serves as the hopping-on-point for a large number of readers. Surely, Bendis kept this in mind when he broke up INVINCIBLE IRON MAN #1’s main storyline, the fight between Riri and Animax, with windows into different periods of the former’s formative years. This non-traditional narrative structure allows writer Brian Michael Bendis to show readers who Riri was, to lead them through a decade of her development, without sacrificing the opportunity to show the person she has become. Bendis is an unstoppable force. He’s been Marvel’s not-so-secret weapon for some time now, somehow capable of simultaneously scripting five unique titles in the Marvel Universe (plus POWERS) without any of them noticeably suffering in terms of quality.

READ: See how Tony’s other successor is doing in our review of INFAMOUS IRON MAN #1 !

While she is a superhero, at just 15 years old Riri is still a child, stuck in the awkward throes of puberty. Through her dialogue, Bendis is able to convey the uncertainty of adolescence — that characteristic anxiety that quietly nags even the most gifted of teens. Though she’s only a teenager, Riri does a fine job dealing with Animax. She seems hung up on filling Tony Stark’s shoes. This is best shown in her lack of satisfaction with her suit’s technology, and her self-critical narration of her fight with Animax, the takeaway of which is that in Riri’s mind, Tony Stark would’ve done a better job.

READ: See the importance of diversity in comics with an open letter to Kamala Khan!

Artist Stefano Caselli successfully treads the line between realism and surrealism, providing characters that pop against masterfully-done backgrounds. Caselli’s choreographed battle sequences between Riri and Animax and her creations capture motion exceptionally well. From INVINCIBLE IRON MAN #1, it would seem that Caselli excels at rendering fraught scenes. But what stands out above all else is Caselli’s ability to depict Riri with a wide range of almost cartoonish expressions, which is extremely reflective of the manner in which children instinctively over-dramatize their reactions.

Colorist Marte Gracia provides Caselli’s linework with sleek, realistic colors representative of an aesthetic that has become characteristic of modern Marvel comics. One of the highlights of Gracia’s work on INVINCIBLE IRON MAN #1 is the way he captures the setting sun reflecting off of Riri’s armor — his command of the sky and how its natural light interacts with the contents of each panel is certainly striking. Perhaps my favorite aspect of Gracia’s work is the subtlety of the shading he employs while coloring the living, which is at its most powerful when applied to the contours of the human face. Gracia provides a sense of warmth to each character, causing them to almost pulse with life. 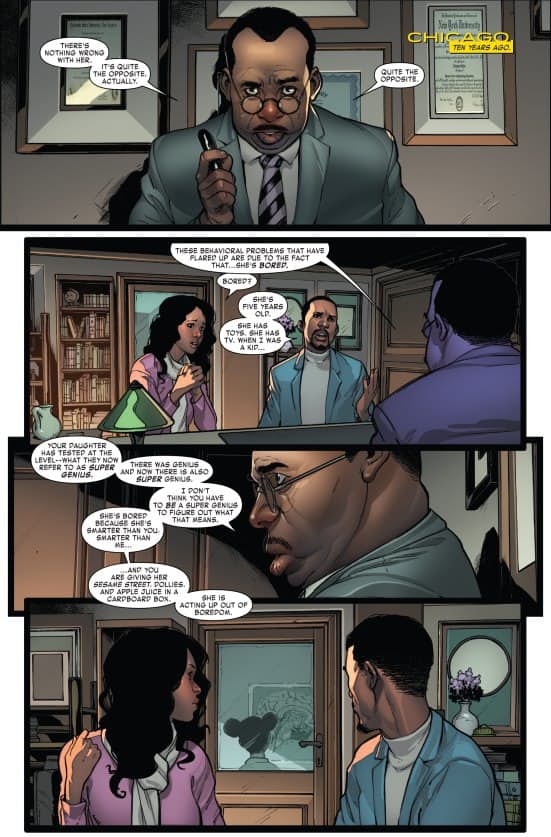 Riri Williams is not Tony Stark, and as such we should not belittle her emergence as a hero by comparisons between the two. However, knowing the nature of the internet, I know that this is too tall an order. The most we can hope for is that Riri herself will stop making these comparisons, and accept her role as a unique hero, rather than just her predecessor’s replacement. She has some big armor to fill, but there’s no doubt in my mind that she’ll do just fine.