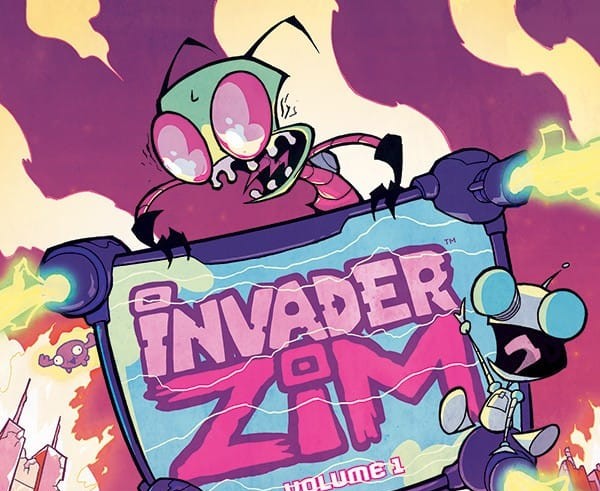 Zim, GIR, Dib, and Gaz have re-invaded the hearts of 90’s kids everywhere. Well, at least the ones who read comic books. Originally, INVADER ZIM established its strange, dark humor on Nickelodeon as a television show, mostly airing from 2001-2002, with a brief stint in 2006.  Jhonen Vasquez, the creator of adult cult comic book hits like SQUEE! and JOHNNY, THE HOMICIDAL MANIAC, was approached to do the show, and his style certainly didn’t waver.  Looking back on the Annie- and Emmy-award winning show, it’s nothing short of bizarrely funny and kind of understandable why it got cancelled.  The dark yet quirky tone, with occasional adult themes may not have been the best material for Nick, even though all the controversial stuff probably went over a kid’s head.  I know it did for me.

READ: Need more Oni Press in your life? Check out our review of their other title, RICK AND MORTY #10!

Now, indie comic book publisher Oni Press has a collaboration with Nick and Vasquez.  They have since produced a monthly book, with Volume One coming out January 27.  There has always been mystery, speculation, and intrigue about the relationships revolving around the creators of INVADER ZIM, but nothing concrete, or any rumour worth mentioning.  That being said, this comic version has brought in plenty of eyeballs from fans of the show and of Jhonen Vasquez.  The product has been nothing short of a revelation. 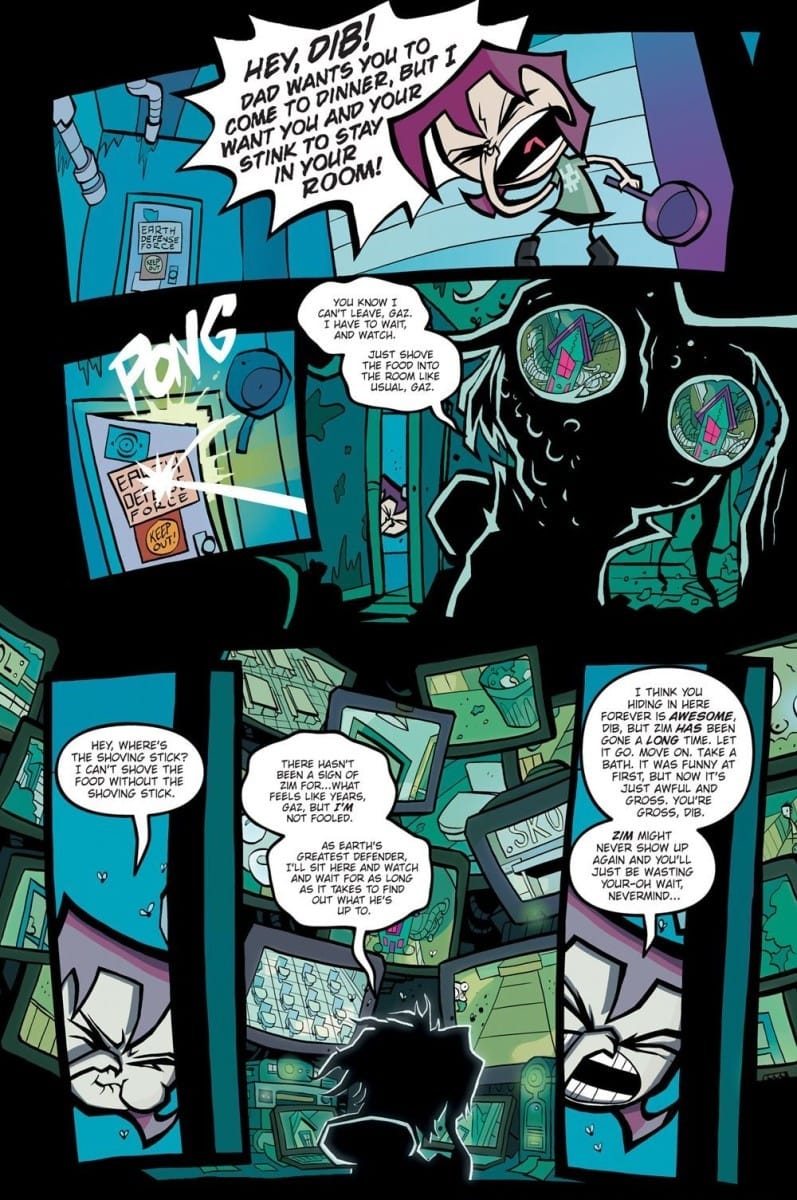 The book is far too good to be ignored, and it shouldn’t be a surprise.  After all, Jhonen Vasquez is continuing to work as a writer/consultant in his preferred medium with a writer from the television show, Eric Trueheart.  Vasquez also does the occasional covers and variants, as well.  As you can see from the excerpt above, the art replicates the show.  The penciler Aaron Alexovich, and inker Megan Lawton combine thick lines that really help the characters and details stick out, which renews a sense of welcomed nostalgia from the TV show.  There’s no quality lost in the rotating colorists either, as each of them retain the interesting, unique color palette.  The panelling resembles the zaniness of the action in the story and might just prove INVADER ZIM found its true form as a comic.

LISTEN: Need more aliens in your life? Check out our podcast about another underrated green alien, Martian Manhunter!

The stories range from Dib waiting years for Zim to re-emerge, as he grows impossibly grotesque in the process; Zim trying to please The Tallest; Dib pushing the wrong buttons on Gaz; and, of course, Zim trying to destroy Earth.  It pretty much picks up where the show left off, and all the stories have been extremely engaging with some surprisingly neat twists too. What’s more pleasant than seeing images of your childhood brought out of the past and into the present?  It’s how I imagine reuniting with a good friend on a tropical five-star vacation.

I mean who didn’t miss GIR… 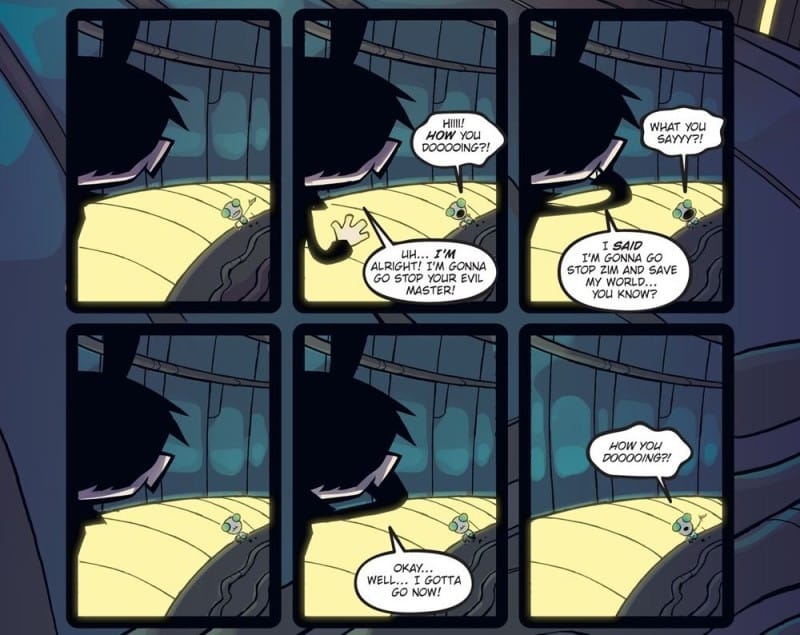 Essentially like the show, the comic is already a masterpiece.  It may very well be the best licensed book out there, right up there with RICK AND MORTY.  The characters haven’t missed a beat, the storylines (with the same themes and conflicts of the show) are distinctively inspired, and the content proves there’s plenty to explore.  The comic works so well, it’s hard to stop the characters’ voices from leaking out your mouth while reading.  I often wanted to scream “ZIMMMMMM,” while rapidly twitching my right eye and contorting my hand into a Dib-madden-claw. The humor goes above and beyond, too.  It’s silly, it’s obnoxious, it’s disturbing, it’s gross, it’s INVADER ZIM. I flipping love it!  I’ll just leave you with this from issue five: 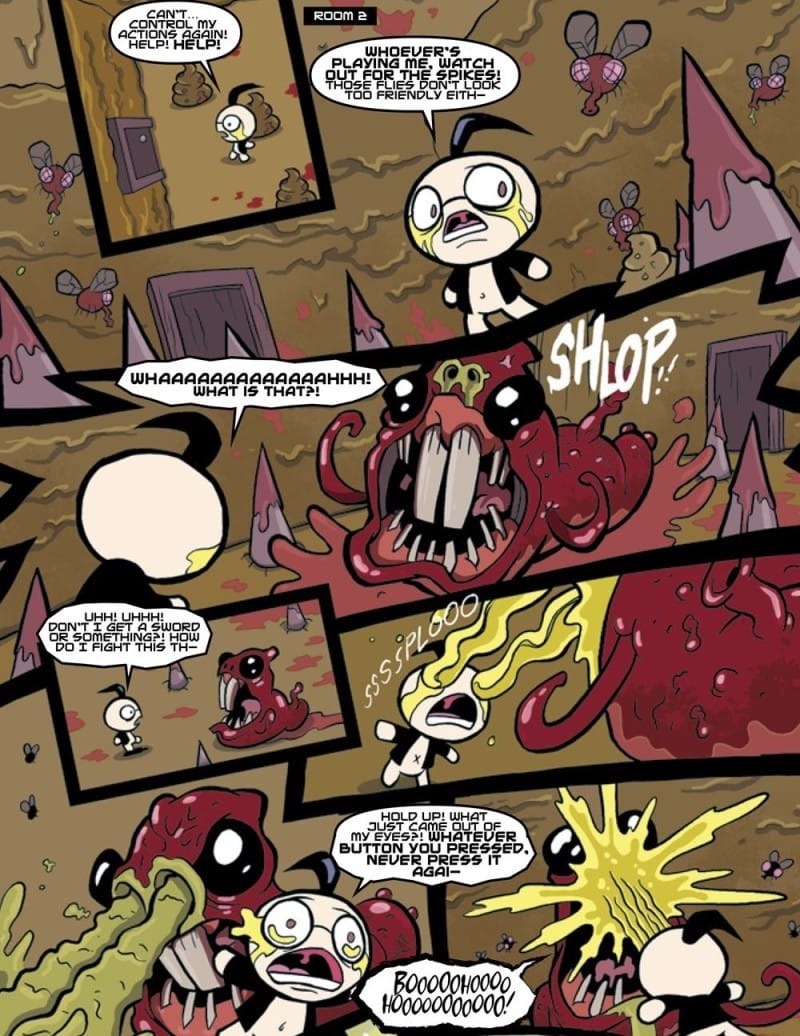