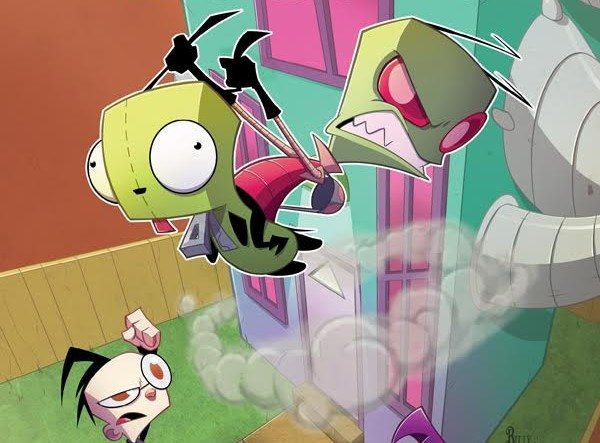 ComicsVerse had the utmost privilege in talking to the creative team of the INVADER ZIM comic published by Oni Press. If you’re looking for a normal interview…this isn’t it. These fine quirky fellows capture all the dark, wacked-out essence of INVADER ZIM with their hilarious responses. We dare you not to enjoy yourself…

ComicsVerse: Eric, what has the long transition of being an original writer of the show to main writer of the comic been like? What’s the journey been like? Did you ever think this would be revived?

Eric Truehart (writer): The journey has been long and winding and lined with carnivorous plants that smell of quesadillas and scream like howler monkeys.

None of that is true.

Honestly, I never thought it would come back as a comic book.  When the show was cancelled, I kept thinking in the back of my mind that it would return to the air some day.  You always think that because it makes you feel better about losing your job.  “Someday we will be vindicated!!”

But as a comic book?  No, I never thought it would come back in that form.  It was Oni Press who spearheaded that quixotic endeavor.  They stormed the gates of Nickelodeon’s licensing offices and said, “We want to license a ZIM comic!” and the Lords of Licensing bellowed back, “Um… Why?”  Then they called Jhonen, and he said, “Um… Why?”

But the “transition” has been pretty straightforward, honestly.  We’re writing the stories in the same style and point of view that we used to, they’re just not moving and shouting.  They’re sitting there on the page, staring back at you.  See them staring?  They keep looking when you turn away.  Even when you close the book, they’re looking.  And they see into the dark corners of your soul.

READ: The INVADER ZIM comic is a revived childhood dream!

CV:  Warren and Fred, what challenges come with working on a licensed comic with established characters/universe versus your own work or other work in general?

ET: (Warren and Fred lie.  Believe nothing they say.)

Warren Wucinich (artist): Both licensed comics and creator-owned comics have their pros and cons. On a licensed book you’re playing by someone else’s rules and don’t always get to do what you want. But on the other hand, since you’re working with other people you can often bounce around ideas and let them germinate into something wonderful that you probably wouldn’t have come up with on your own.

On creator-owned projects you often get the freedom to do what you want but that freedom can sometimes be a bad thing. It’s really easy to paint yourself into corners or become creatively stagnant if you spend too much time in your own sandbox.

(Eric is correct. This is all untrue.)

Fred Stresing (colorist): Warren is pretty much spot on here. Creating and working on your own projects is very fun, but in its own weird way, kind of confining. When you work on your own stuff, not having as much outside input can definitely hinder your creativity. It also helps immensely to have a deadline from an editor.

For me, one of the bigger challenges as a colorist on licensed books is learning the style of colors that licensors will allow. For example, sometimes licensors will let you go pretty wild with mood lighting. Other times, a licensor wants the character colors to be exact and spot on for recognizability, and you cheat the lighting a bit.

In your own work, obviously, you can do what you like. To good or bad effect. 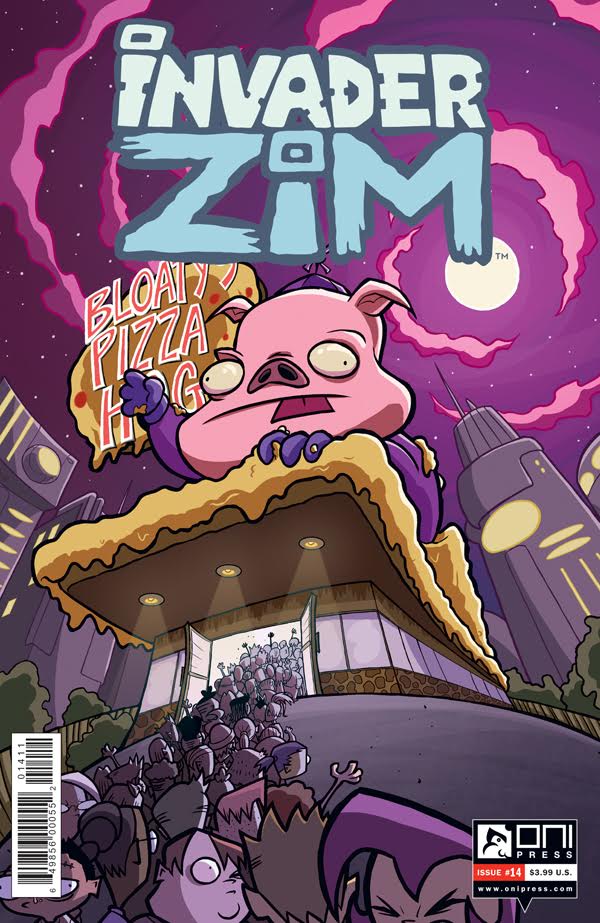 CV: As you know, Jhonen Vasquez is the “control brain” of ZIM, who still inflicts his presence. Eric, you seem to have a similar sense of humor as him. Was the chemistry with Jhonen instant or did it take time to fester?

ET: I… I don’t know.  “Invader ZIM” was my first job in television, so I didn’t know if there was “chemistry” or that’s just how people in TV were.  I guess Jhonen had liked a spec* episode of “South Park” that I wrote which, if I recall correctly, featured Cartman dropping acid and starting a religion around bacon.  My agent called and said, “There’s this show at Nickelodeon,” and I thought, “I would sooner die than lower my advanced talents to the level of mere children!” (I was deluded about a lot of things back then.)

*In the TV biz, “spec” means written as a writing sample, with no expectation anyone involved with the actual South Park would ever see it.

They gave me copies of the SQUEE and JOHNNY trades.  I was driving out of town to visit my sister in the Bay Area.  I remember sitting in a coffee shop in Berkeley, reading more and more pages, and thinking, “This show could be awesome.”  The next week I met Jhonen in his office.  He shot me in the face with a gun that fired bullets of pure darkness from the skull of a cursed beaver or something.  It mostly worked out after that.

So I can’t really comment on chemistry, but I do know Jhonen is one of the funniest people I’ve ever worked with, and I always know the additions he makes to the comic scripts will only add more hilarity and/or beaver skulls. You can’t say that about everyone.
CV: Warren and Fred, do you guys have similar creative sensibilities as Jhonen and Eric or did you have to adapt to it?

WW: Both? I’ve been a fan of Jhonen’s work since I wandered into that dank comic shop on that fated day in the 90’s and picked up an issue of JTHM. I thought our drawing styles were pretty similar back then and I suppose they still are. There’s some challenging adaptation involved but it’s not like a Norwegian black metal guitarist trying to play jazz clarinet.

The truth is we all have similar creative sensibilities because we were all hatched together in Jhone– Father’s underground lab.

FS:  I’ve been pretty familiar with Jhonen’s work for a while, and my creative sensibilities line up pretty well. ZIM has always had a fun, dark, and kind of gross sense of humor I enjoy, and it’s great to see more of this in the comics (specifically, PANTS! and KC Green’s issue).

CV: How do you all continuously capture the atmosphere of ZIM as a team and individually? What do you guys think changed from the show?

ET: It’s quieter now.  And doesn’t move as much.  But I will say all of the artists have done an amazing job capturing the energy of the show in still images.  Warren and Fred are simply great.  It’s a testament to their talents, and the deals they’ve made with various devils.

As far as stories go, we’ve been trying to turn out ZIM tales just like we did on the old show.  Issue no. 8’s “PANTS!” story is a genuine “lost episode” that was never produced.  But I think we’re slowly adapting to the comic medium.  The artist-driven issues are a way to see the whole ZIM universe through another lens.  We’ll also probably do more multi-issue arcs in the future.  Comics are good for that.

WW: The show’s atmosphere was pretty unique, which I think is one of the main reasons it resonated with fans. Before I came aboard there were plenty of other talented artists who laid the groundwork which makes my job easy by comparison. I try to expand on what they’ve done.

Most of the changes from the show have just been tweaks here and there. Occasional design and tone changes. Oh, and more Mini Moose.

FS: Atmospherically, I try to keep the shows colors and textures in line with what we’re all familiar. Usually, this means grease stains and mysterious splotches on the buildings. And occasionally on the characters.

The biggest change from show to book is that I’ve been struggling to get the recent issues to work in my DVD player. They usually just get jammed and start a fire, and then I have to move again.

READ: Craving more from Oni Press!? We interviewed the RICK AND MORTY team too!

CV: How do you guys keep the material fresh and brilliantly authentic? Eric, is there any storyline you’re itching to get out like “Pants?”

ET: Short answer: We take “Brilliantly Authentic Pills™” before we sit down to work.  Don’t tell anyone.

On the story side, I think I’m drawing from the same sci-fi/horror/ridiculous influences I drew on back in the day.  There’s a little more of an eye on character, but it still has its core in goofy weirdness.   We were always trying to make ourselves laugh on the show, and I think that’s the best thing you can do in a creative work.  You can always tell when people are throwing down jokes for their own sake, not because they think they’re funny, so I hope by entertaining ourselves we’re actually entertaining everyone else.

I can’t say too much about any specific storyline I’m planning, but I’ll again say that I’m thinking about a larger story arc.  We’ll see how that plays out.  It could be horrible.  Three issues of GIR staring at his feet.  It’s got “Eisner Award” written all over it.

WW: The big meaty chunks of material come from Jhonen and Eric. For my part I try to keep things pretty similar to what’s come before but adding some of my own sensibilities to the mix.

FS: All of my creative freshness is kept sealed in a ziplock bag in my fridge next to some lunchmeat.

CV: What can we expect as the series continues to thrive? Any sneak peaks or easter eggs you are willing to give?

*TAK is not coming back.  At least not yet.

WW: I have a behavior inhibitor chip that keeps me from answering this question. Sorry!

FS: I’m told that ZIM will be featured prominently in upcoming issues of the series. Maybe. I think. You know what, don’t hold me to that.

I hope you enjoyed this interaction as much as we did! If you want more from these creators and publisher check out their twitter accounts: