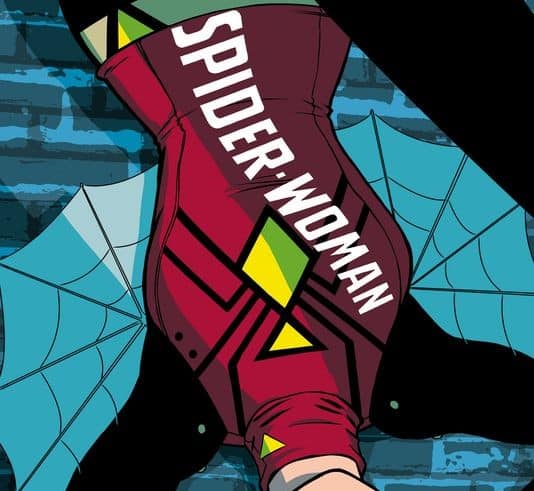 Perhaps the most unusual of Marvel’s $1-one-shot TRUE BELIEVERS, this is your chance to meet – Spider-Woman!

First appearing in 1977, Spider-Woman has starred in her own series quite a few times – this being the latest.  Ironically enough, her origin is more to do with the comic book business than with anything else – as Stan Lee explained:

I suddenly realized that some other company may quickly put out a book like that and claim they have the right to use the name, and I thought we’d better do it real fast to copyright the name. So we just batted one quickly, and that’s exactly what happened.

Spider-Woman was introduced in MARVEL SPOTLIGHT #32, with the character-work done by Archie Goodwin and the costume design – a sleek, sexy look with a maximum of bright colours – by Marie Severin.  As the years passed, Spider-Woman’s backstory got ironed out and retconned a few times, but the costume stayed basically the same. 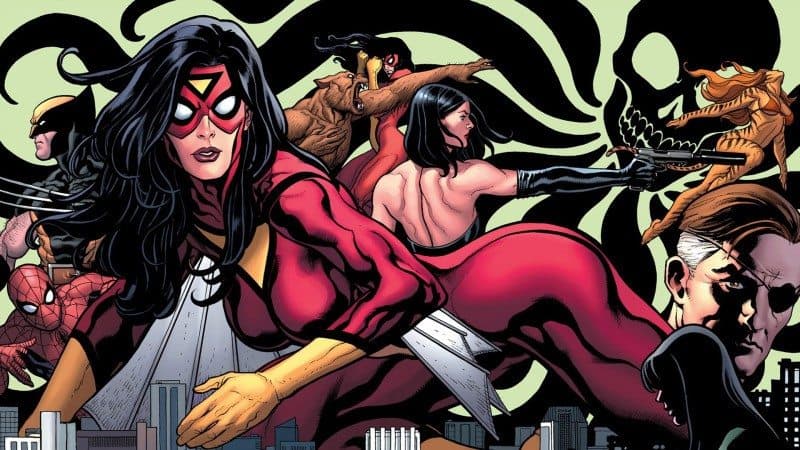 Spider-Woman was born the daughter of two Hydra scientists, and was part of a macabre experiment to grant superhuman powers.  She awoke from a lengthy coma to a world of complexity and strangeness, and soon found herself plunged into the spy game.  It was the spy side of Jessica Drew that fascinated Brian Bendis when he brought her back out of obscurity in the early 2000s, giving her a key role in his NEW AVENGERS run.  From there, she’s grown in status to a major-league Avenger.  There are even rumours that Marvel are planning a Netflix series!

The first challenge facing the new SPIDER-WOMAN series was its own cover art.  Even though Marvel were trying to market the character as a strong female lead, they hired Milo Manara to do a variant cover that set the internet ablaze: 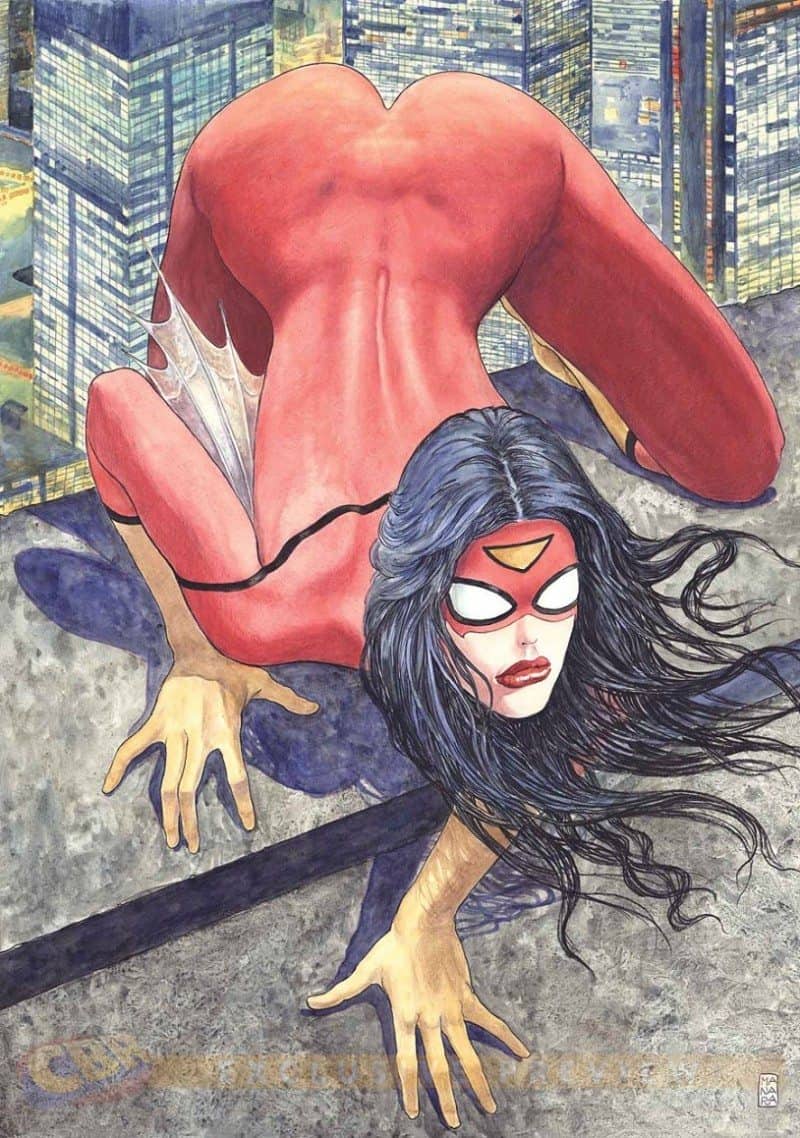 It wasn’t exactly Marvel’s best move.  They swiftly distanced themselves from the controversy, and in fact the costume redesign – courtesy of Kris Anka – seems likely to have been kicked off by all the heat!

Dennis Hopeless took the series in an unusual direction.  By #5 (the issue being marketed as TRUE BELIEVERS: SPIDER-WOMAN #1), he’d completed a “Spider-Verse” tie-in, and he was now ready to launch Spider-Woman into a solo career.  He separated her from the Avengers, started her job as a private detective, and soon showed his trademark characterisation skill.  It became a personal favourite – and wasn’t above self-references… 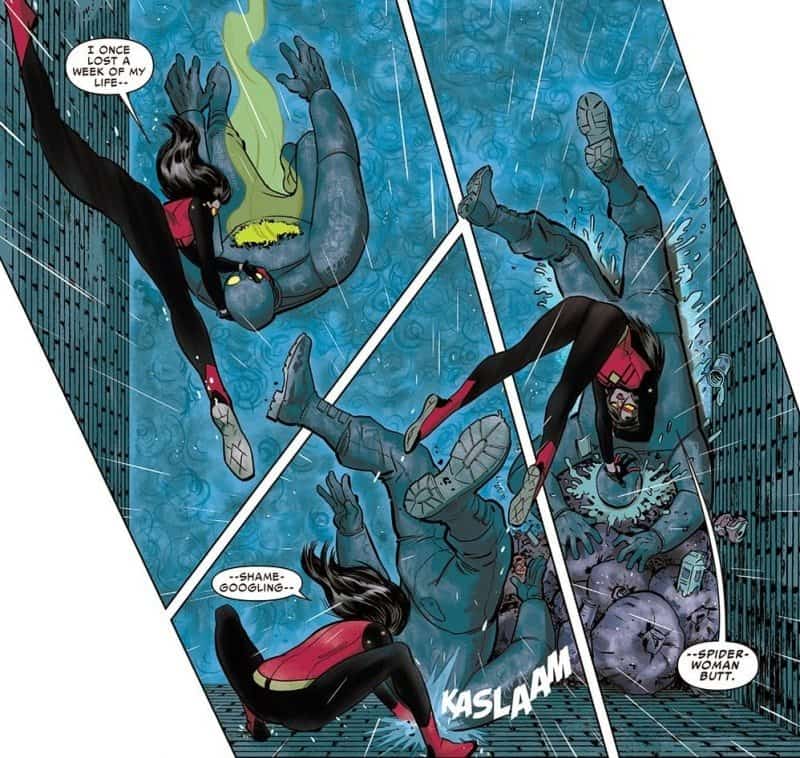 Dennis Hopeless is returning to SPIDER-WOMAN, but the eight months has been used to dramatic effect – Spider-Woman is pregnant!  Questions abound: Who’s the father?  Is it a boy or a girl?  How do you take on the bad guys while carrying the extra weight?  Oh, and how will your altered DNA affect the baby? 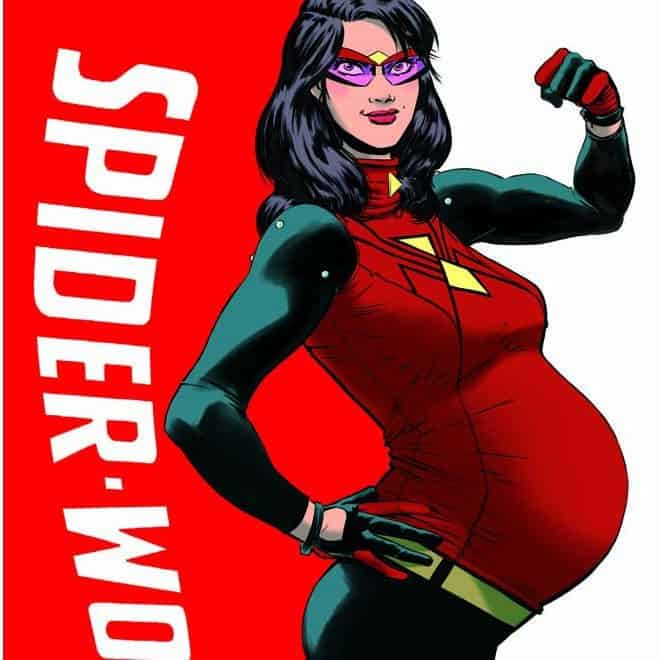 It’s a bold move on Marvel’s part.  Few comics have explored the idea of a female superhero being pregnant – never mind that it’s such a common part of life.  To have a solo series that stars a pregnant woman is an intriguing touch, and, if handled well, this could be a very different superhero comic.