On the 21st of June, CROSSWIND #1 hits the stands. With art by Cat Staggs (ORPHAN BLACK, SMALLVILLE SEASON 11, SENSATION COMICS FEATURING WONDER WOMAN) and written by Gail Simone (BATGIRL, RED SONJA, SECRET SIX),  CROSSWIND #1 is described as a cross between FREAKY FRIDAY and GOODFELLAS. If you think it sounds like fun (believe me, it is) read on as we talk to the creative team about their very first collaboration with Image Comics.

Introducing CROSSWIND and the team

ComicsVerse: Could you describe CROSSWIND #1 to someone who’s unaware of what it’s about and share a little of what readers can expect from it?

Cat Staggs: In CROSSWIND #1 we find Cason Ray Bennett carrying out one of his jobs as a top assassin for a Chicago Mob Boss. He is good at what he does and knows it. He is very well respected throughout the city and his lavish lifestyle shows. Meanwhile in a Seattle suburb, Juniper Elanore Blue, is frantically trying to take care of her stepson, Kelly, who doesn’t like her, and her husband, Jim, who doesn’t respect her and treats her like garbage. She is regularly harassed by him and the boys in the neighborhood. She is in the middle of trying to make a special dinner to impress her husband’s boss and try not to piss Jim off in the process.

The switch happens at a crucial time for both parties and the subsequent fallout is where the ride really gets going. Each are thrown into the other’s world with no context and have to navigate the complexities of each, while wondering if they will ever get “home” again.

Gail Simone: Cat’s nailed it, but I will add that our story also includes housecleaning and Cuban recipes. It’s not JUST killing. Okay, it’s mainly killing.

CV: This is both your first time working with Image Comics. How did your collaboration come about, and what made Image the perfect publisher for this story?

CS: Gail and I have been trying to work on something together for years. It never worked out scheduling wise, until now. She approached me at a con and told me what she had been thinking about and I jumped at the chance. It is a genre I have always wanted to work in plus I get to work with Gail. With Image behind this, we have a chance to really create the world we want. We have tremendous freedom in the development and design. They are a fantastic group of people that really care about great stories and work so hard to get them out there.

GS: I think we were both completely surprised by how Image has thrown themselves behind our book. We were somewhat under the impression that Image could be more of a do-it-yourself operation, but to our delight, they’ve been right beside us, just top-notch people full of passion and awesome ideas. One of the nicest experiences I’ve had.

Eric Stephenson at Image had asked what I had that would fit at Image, and CROSSWIND was something I’d been holding onto for just the right moment. Bringing Cat aboard was the smartest thing I ever did. LOVE YOU, CAT.

CROSSWINDS characters and what makes them tick

CV: Despite their drastic differences, Cason and Juniper feel connected, even before their ‘switch’. Both characters are dictated to by people higher up than they are and don’t seem to catch a break (whether it’s killing a friend or being dictated to by their ‘other half’). How intentional was that connection, and what’s behind the significance of their lower status to the other characters?

GS: I’m not going to say much at this moment, but that observation is annoyingly perceptive. Yes. There’s a thing there. More than that, I can’t say yet. Quit being astute!

CV: Juniper’s story is particularly uncomfortable and laced with misogyny. What sort of emotional places does a creative team have to go when dealing with a difficult subject like that?

CS: Honestly, I don’t have to dig too far down, and I am sure Gail doesn’t either, to find the emotion it takes to convey a situation like that. Women have all been there at some point. I do have to access those feelings in order for it to be authentic on the page. Some of these scenes are really intense and if I can’t get that across in the art, I haven’t done my job.

GS: Cat’s right, most women and a lot of men don’t have to really imagine the crap Juniper goes through. It’s something they’ve experienced. And there’s a whole world of people who just don’t want to talk about it. Juniper is a little beaten down by that…she’s someone who should be happy, she’s a good person with a great brain and imagination, she’s got a family and a great home. But none of that keeps her safe, somehow.

CV: Cason seems like a good guy, despite his profession. Is he the typical anti-hero, a bad guy with a good heart or are there things buried within him we haven’t seen yet?

GS: I would say Cason’s opening scene presents Cason at his worst. There’s a better side, but he’s not really in touch with it, his world is a lot angrier than that.

CS: As with any good character, there are many layers we get to explore. I’ll leave it at that. 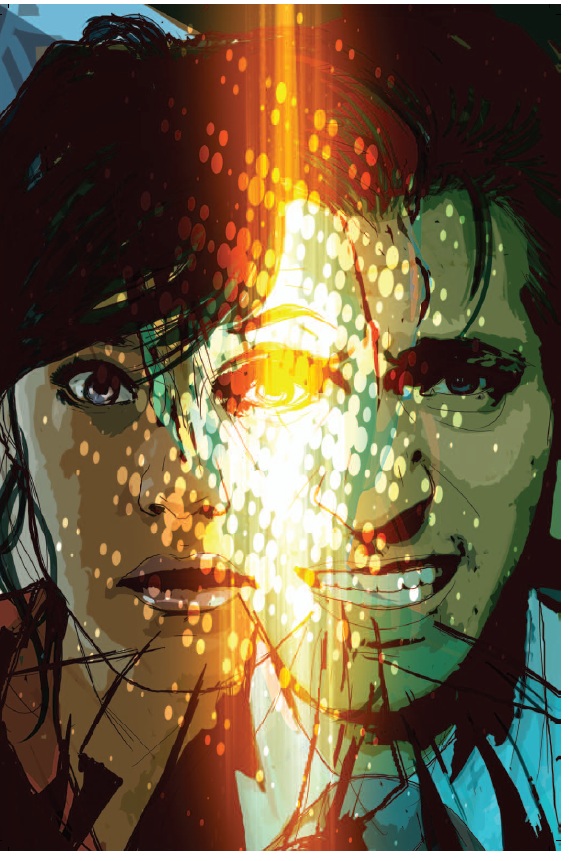 CV: Cat, I was struck by how gorgeous your work is on this book. The paint style and photo realism really play to the strength of the script. Could you describe your artistic process?

CS: Thank you. It was very important for this story that the “acting” be strong. Like any good artist, I have a large catalog of reference material and whatever I don’t have I will shoot when I need. I’m getting pretty good at action selfies. So much of this story relies on small gestures. Having to remind the reader that this is not completely a man or woman. The woman’s mind is controlling the man’s body and visa-versa. So I have to remember when I am drawing Cason, post switch, that he has to move like a woman would move as she tries, or pretends, to be “a man”. The opposite for Juniper. How would a man stand, hold something, etc. I have a list of personal gestures and color palettes for each character to help me keep track as we go along.

GS: Just jumping in to add that I’m the luckiest writer in the world.

CV: Despite the fantasy element, CROSSWIND is steeped in realism and harsh violence. How important was it to set the tone before the ‘switch’ happens?

CS: A good set up is half the battle. We need to know and feel how dire or extreme the situations are. That way when they switch it amps the sense of urgency they each feel to figure out what happened before something happens to them in the fallout.

GS: It’s two stories we’re familiar with, a crime story and a troubled domestic scene. Where it gets manic is, the wrong player ends up in each scenario, with no skills to handle it.

READ: If you want gut punching horror, check out our review of CLEAN ROOM #1!

CV: The first page sets the scene for Cason’s introduction. I found it to be a lovely combination of writing, art, and lettering. Who’s your letterer, and how do you think a great letterer can enhance a series as their job is too often overlooked by the general public?

CS: Simon Bowland is our letterer and he is fantastic! A good letterer enhances the storytelling and emotional impact. They are essential to keeping the rhythm of the writing and art flowing across the page.

GS: Simon was the letterer on one of my favorite jobs ever, my run on Red Sonja, and he just killed it. So we stole him to come be part of our sick little club. And it’s a challenge because he has to convey two different leads, and THEN switch those leads, without the reader being confused. It’s been lovely, he’s terrific.

CV: When the ‘switch’ occurs, Carson’s reaction to finding himself inside Juniper’s body is priceless and typical for a man, while Juniper encounters a dead body. What can you tell us about the difficulties they’ll both face further down the line in the series?

CS: The fallout from the switch is a real roller coaster ride. Each of them have to navigate so carefully as they don’t know who or what they can trust.

CV: Can we expect an almighty reckoning of Juniper’s harassers, the boys next door, and her hubby?

CS: I can say, without giving anything away, that I have had the satisfaction of drawing one of those resolutions. And it was awesome!

GS: Oh, there’s gonna be payback ALL OVER THE PLACE.

CV: How far ahead is the series planned?

GS: We can’t really say, but we have room for a LOT of CROSSWIND. There’s excitement here in and outside of comics, people are dying for this book to come out and Cat and I are committed for the long haul. There’s going to be stories for a good while, I hope. 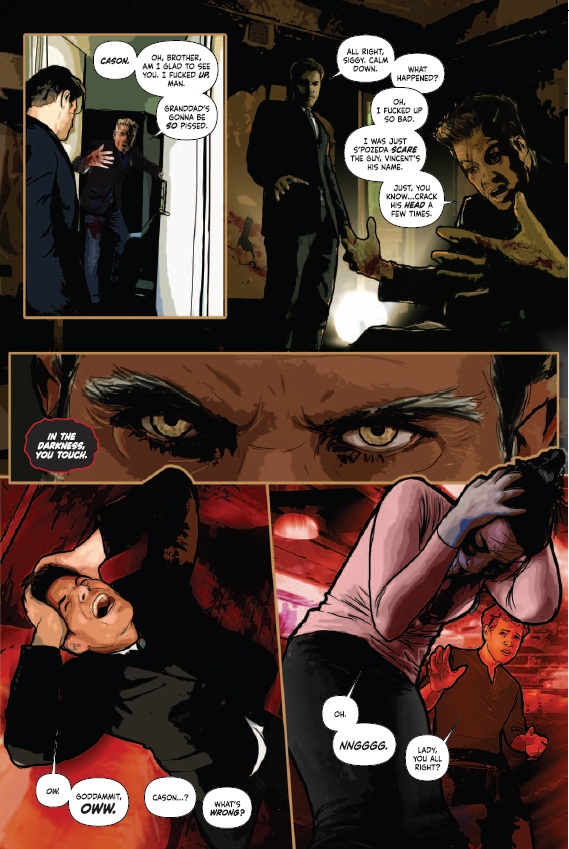 CV: If you could Body Swap with anyone, who would it be? Also, bear in mind, they would be walking around as you.

CS: I don’t think I want the responsibility of screwing up someone else’s life like that.

GS: Is Rob Schneider an option?

CV: Before we wrap up, do you have any other upcoming projects you’d like to share with us?

CS: I am pretty immersed in CROSSWIND at the moment but I’ll have several books I am doing covers for. I also have another short story, written by my wife, Amanda Deibert, in JOHN CARPENTER’S TALE OF A HALLOWEEN NIGHT VOL. 3. That will be out late summer, early fall. I am also a part of THE THING 35th ANNIVERSARY ART BOOK  that will be out in mid summer.

GS: I am finishing up the first season of CLEAN ROOM, my horror series at Vertigo. I have another creator-owned series coming soon from Dark Horse, called WONDERFALL. And there may be a return to superheroics in my near future. But man, I’m digging CROSSWIND right now!

If you to keep up to date with the creative team and just how important Rob Schneider is, follow them on twitter @CatStaggs and @GailSimone. CROSSWIND #1 is on sale the 21st of June.