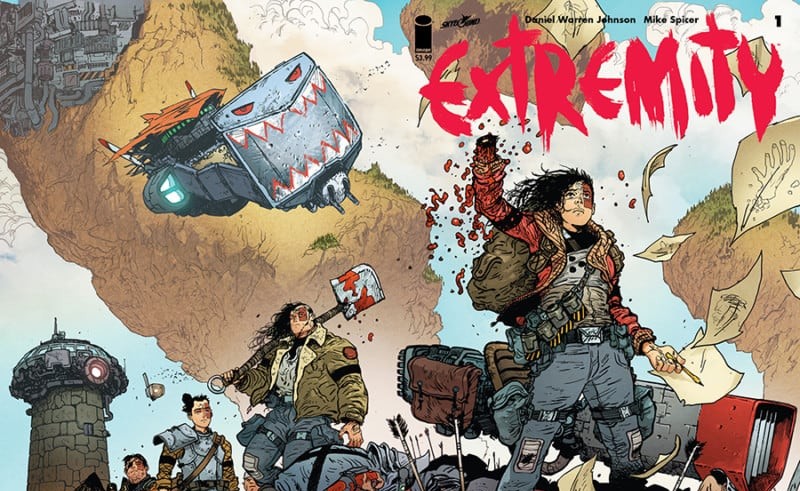 While at Emerald City Comic Comic Con this year, ComicsVerse got to sit down with the talented Daniel Warren Johnson, creator of Skybound Comics’ newest ongoing series EXTREMITY. We spoke with Daniel about his long-running webcomic SPACE MULLET, his influences and how putting part of his self into EXTREMITY made it such a wildly interesting read.

ComicsVerse: So Dan can you tell me more about your professional growth with your webcomic SPACE MULLET?

Daniel Warren Johnson: It was a bit scary, especially when I published SPACE MULLET in April last year, I was getting chills seeing the difference from where I started to where I am now.

CV: When I was reading it felt like this was an epic flip book of your artistic growth.

DWJ: A lot of people were saying that they enjoyed seeing my progression, but my fear was that people would see it and think “oh he was shit then and he’s gotten a little better, and all I really see are my mistakes.” It was seriously hard to put this in print, but it’s like you said a lot of artists have come to me and said: “I love to see how you’ve grown, it’s like I get to watch you learn as the story progresses.” 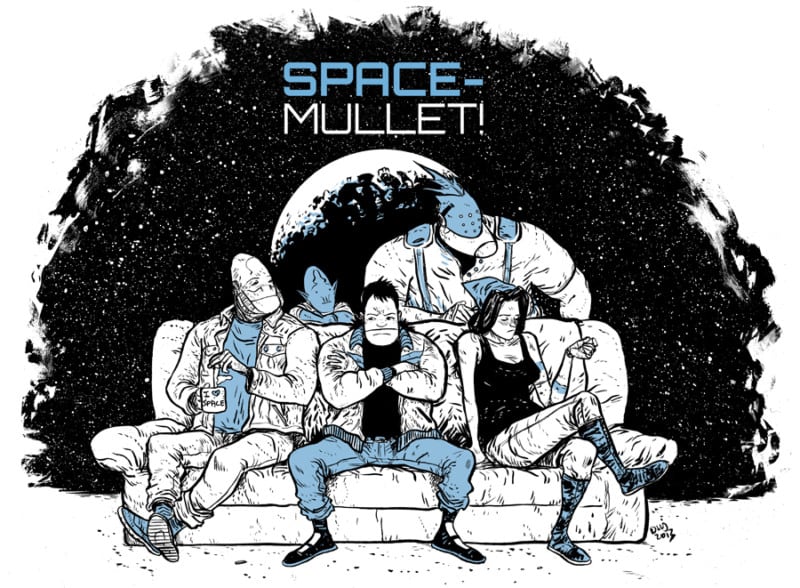 CV: What is one specific technique you were able to improve because of SPACE MULLET?

DWJ: Especially when I was working on SPACE MULLET, I was working my butt off to get better at perspective, facial structure and cartooning. From the beginning, SPACE MULLET has been a canvas for me to make mistakes on. I’ve learned publicly.

CV: I’ll ask you what I like to ask everybody, what are you currently reading?

DWJ: KAIJU MAX by Zander Cannon. So good. Xander is an awesome dude he’s super talented, his dialogue is amazing.

CV: Now moving forward into your latest work let’s talk about EXTREMITY. The world of EXTREMITY seems to be a mix of both future technology and archaic architecture. Did you have any specific influences when coming up with this world?

DWJ: I’ll start by saying that I created the world to fit Thea’s story. What I usually do is create a character first to create emotional drives and emotional beats, it’s almost like Thea existed on this white, ethereal plane.

CV: So this is a completely character-driven story, Thea was running through this white dimension and the world to started coming together around her?

DWJ: Yeah and this might sound weird, but Thea tells me how the story is going to go. The character speaks to the writer, and she always speaks to me. As she’s talking to me, it’s not like she’s talking to me! (laughs) But, when I was developing her I built this world to tell her story. And what that meant to me was drawing cool stuff like floating worlds, it was really fun.

CV: Can you tell me a little bit about how she ended up being an artist and the challenge of her drawing with her other hand?

DWJ: Yeah well originally she was going to have the traditional Revenge story arc. The family is killed, mom is killed, must have vengeance. At that point, it just felt like a dead revenge story with cool speeder bikes, which is fine there’s nothing wrong with that, but it didn’t have the spark that I wanted. It was a lot of mental stop lights of me drawing and thinking, drawing at night casually sketching her and the characters in the story. Finally, it dawned on me that the story had no emotional punch because I wasn’t putting any of myself into it. I was just trying to create something that looks cool, and I had to finally ask myself what would be the thing that would destroy me? And that would be losing my drawing hand if we’re going to get real. And that’s what drove her, and that’s when the story really clicked. After putting a part of who I was into this character, I felt confident to start putting together a pitch. It was the personal element that really put it all together and made it a story worth telling. 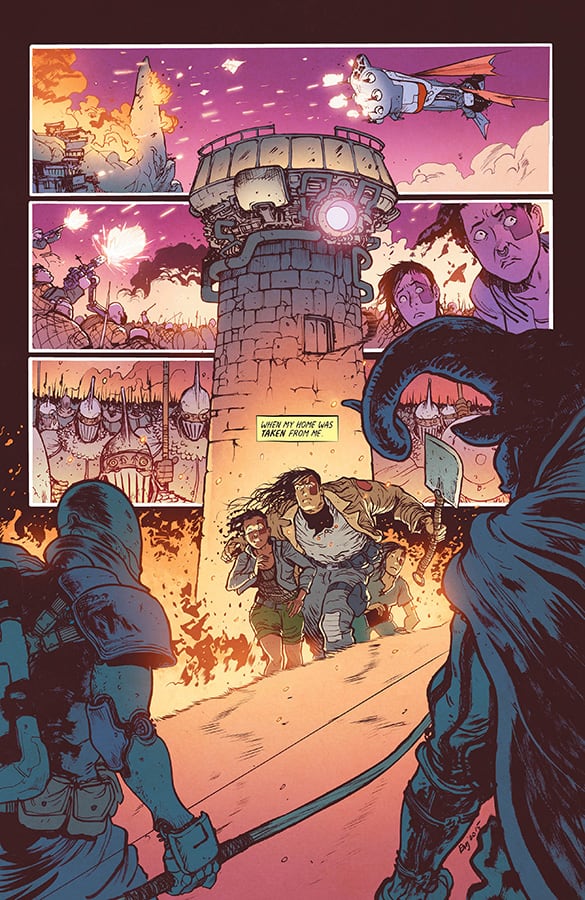 CV: When creating the world with so many technological advancements, many creators would jump at the chance to give their characters SciFi weapons like lasers and lightsabers. But your warriors seem to use medieval blades. Was this choice in weaponry important in defining your world?

DWJ: I was just finding a way to differentiate two different groups of people, two Clans. So you have this war-torn world that purposely doesn’t have a name. It could be the future on Earth, or it could be somewhere else. You have these people floating above who have kind of lost touch because they even have been up there so long they even have their own water source which you can see in issue 1. So they have their own industry now. They’ve separated themselves from the world below which is this whole tattered science fiction world. It’s all the futuristic stuff that you actually have to dig for. Which the Roto do because they are all the way on the ground while the Paznina can mass-produce things like swords, spears, and armor but it’s on a lower technological level because they started from scratch up above. This stems from a religious idealism that we don’t sully ourselves like those below; we have our own way of doing things.

CV: So the marks on their faces is that a religious belief or something for the clan?

DWJ: It’s a little bit of both honestly. It also helps differentiate who is who beyond what they wear. The Paznina have more of a medieval style while the Roto have this STAR WARS-esque look.

CV: What were some influences from other creatives?

DWJ: Hayao Miyazaki for sure and the NAUSSICA OF THE VALLEY OF THE WIND manga. That series was amazing because there are these moments of complete badassery, but there’s also the very soft moments of her embracing her fellow soldiers. Like the moment they think she’s dead and she just comes back to life, and she hugs them, and then there’s that panel. I’m reading this at 2 AM, and I’m just like it’s so beautiful tearing up saying: “Honey wake up!” (laughs) So that’s definitely a big inspiration.

CV: Can you tell me a little bit more about her learning to draw with her other hand?

DWJ: Part of this stems from the fact that there’s nothing wrong with this style, but the kind of narration you see you in comics like THE DARK KNIGHT RETURNS: “I’m Bruce Wayne, I’m feeling very sad at this moment, here’s what’s on my mind at this moment and here’s what I’m going to do.” I like that, but I feel like it’s done a lot. I noticed while watching more recent TV shows that I really love, there’s no real narration, not even in movies. There might be some narration in the middle maybe in the end, but in general, most people are reacting and talking and expressing themselves in their faces. Again in comics it’s a 2D space and a 2D medium, you really have to sell things, and the way I wanted to show Thea’s emotional state wasn’t just through her facial expressions or her eyes, but the Sketchbook she carries around with her. Her emotional state isn’t really expressed by her face but the drawings she sketches with her left hand. 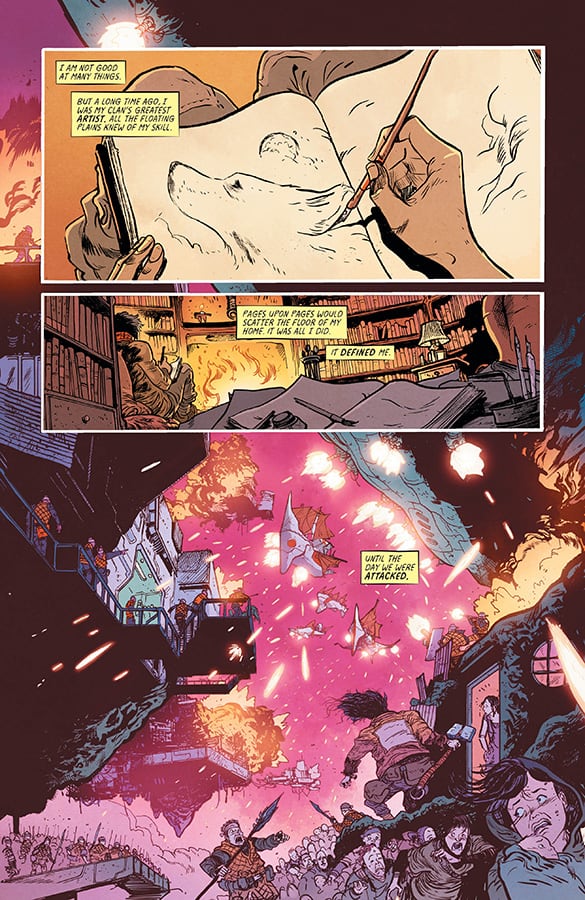 CV: Is this sketchpad her SPACE MULLET? Where we’re watching her progress over time over the series?

DWJ: The idea of EXTREMITY is that the artist she was is gone and she’s questioning whether she’s even an artist anymore. So it’s not so much about her getting better, but rather her figuring out what it means to be an artist. It’s like the thing I’m making with my left hand, this sloppily drawn thing is it even art?  Because I don’t think it is and that’s where she starts in the book, and you’ll have to see where it progresses, how her identity comes about what’s left of it and how she gets it back.

CV: As you’re drawing Thea’s drawings in her sketch pad, you are using your left hand as well correct?

DWJ: Yes and it’s humbling, but it was a good experience because I’m like: “Oh snap I’m literally putting myself in my own character shoes right now.” I think it works pretty well. I didn’t realize how personal the story was until I read it in print, but there’s a lot of myself in there. Hopefully, that’s a good thing.