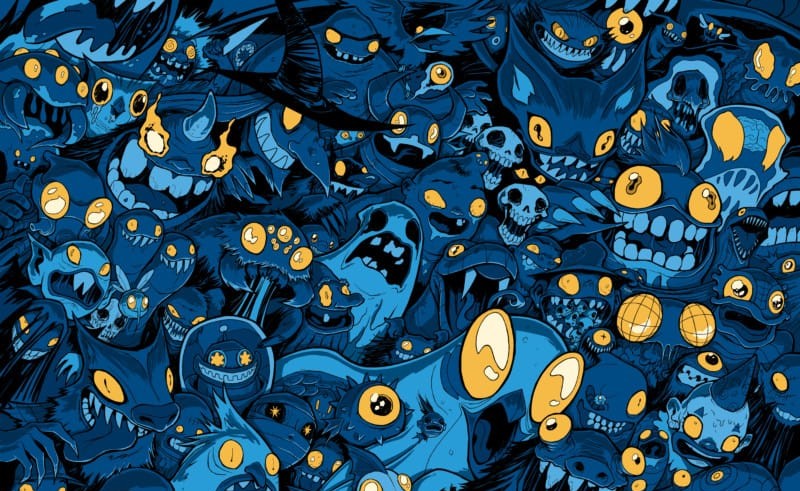 ComicsVerse recently sat down with the publisher of Wannabe Press, Russell Nohelty. Wannabe is a small press that boasts creating “weird books for weird people,” such as KATRINA HATES DEAD SHIT and ICHABOD JONES: MONSTER HUNTER. We spoke to Nohelty about his current Kickstarter campaign to publish MONSTERS AND OTHER SCARY SHIT: A MONSTER ANTHOLOGY, the future of Wannabe Press, and why Russell loves monsters so much. 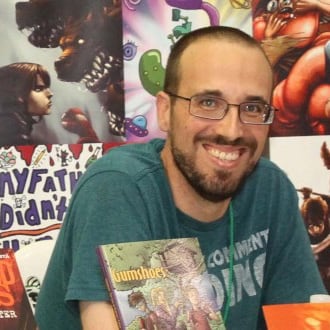 ComicsVerse: Can you tell me about the origins of MONSTERS AND OTHER SCARY SHIT: A MONSTER ANTHOLOGY and the early days of Wannabe Press?

Russell Nohelty: We’ve always had an affinity for monsters at Wannabe Press. Our first book, ICHABOD JONES: MONSTER HUNTER, was all about a psychopath dealing with his own internal and external monsters. Then we followed that up with KATRINA HATES DEAD SHIT, about mythological monsters and gods.

After releasing those books, I had thousands of conversations with our fans and one thing became clear: they loved monsters as much as we did. So I went to a bunch of other creators and asked them if they wanted to jam out and do a cool monster-themed anthology. Luckily, they all said yes, which is why the book is a massive 224-pages of monster goodness. 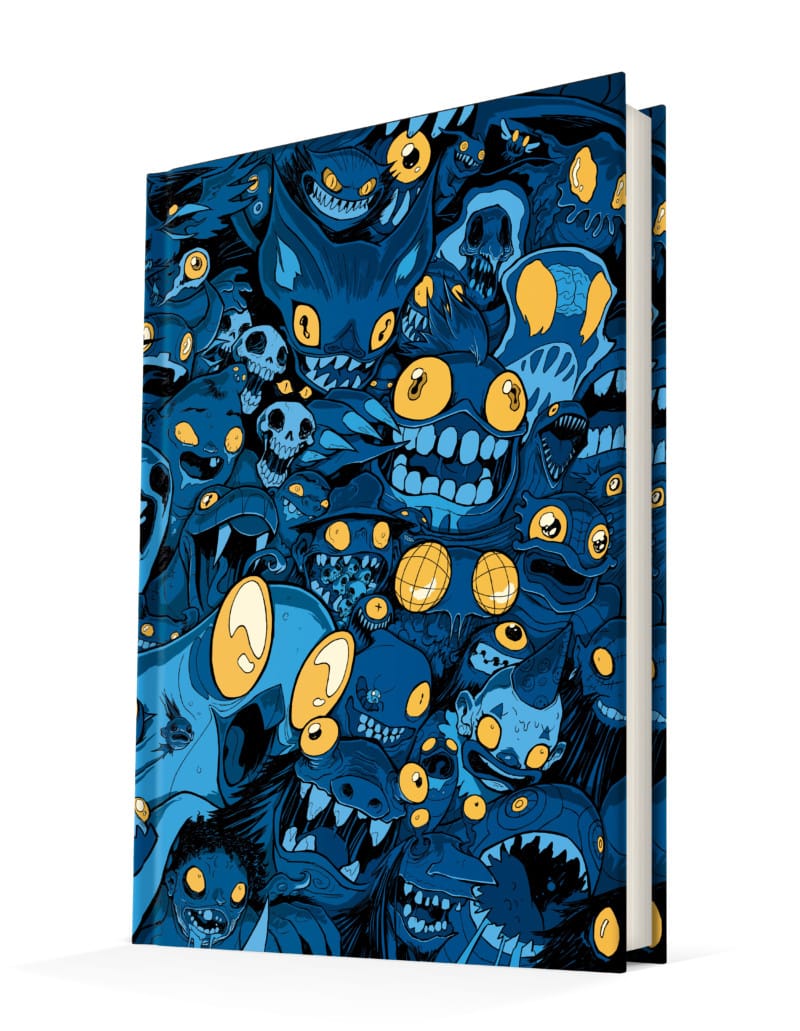 CV: What makes this anthology so special?

RN: It’s created by monster-lovers for monster-lovers, and celebrates everything awesome about monsters. There were two rules for people submitting pitches: first, the pitch had to contain monsters, and second, that the creators had to love monsters themselves. I think that’s what makes this book special. It’s not just a bunch of creators making awesome projects; it’s people giving a big, ole love letter to monsters. The fans see that. The creators see that, too. It’s an amazing experience all-around.

READ: Want more Horror Comics!? Check out our article on EC Comics and the Art of Horror

CV: Have you worked with any of these creators in the past?

RN: A couple of them. I’m working with Nic Touris on a new book. I also syndicated Erik Lervold’s RED CALAVERAS and Bradley Sheridan’s WHY DO I ROCK? for a while back when I was syndicating webcomics. Most of these creators are people I really wanted to work with, but never thought I would. I’m a very small publisher. I only put out 2-4 books a year, so the chances I would work with thousands of amazing creators in my career is very minimal.

That’s what makes this anthology special for me. It gave me the ability to work with friends and creators I respected and admired for years but never thought I would have a chance to collaborate with on a project. The best part of this whole campaign has been geeking out about my favorite artists for 52 days. 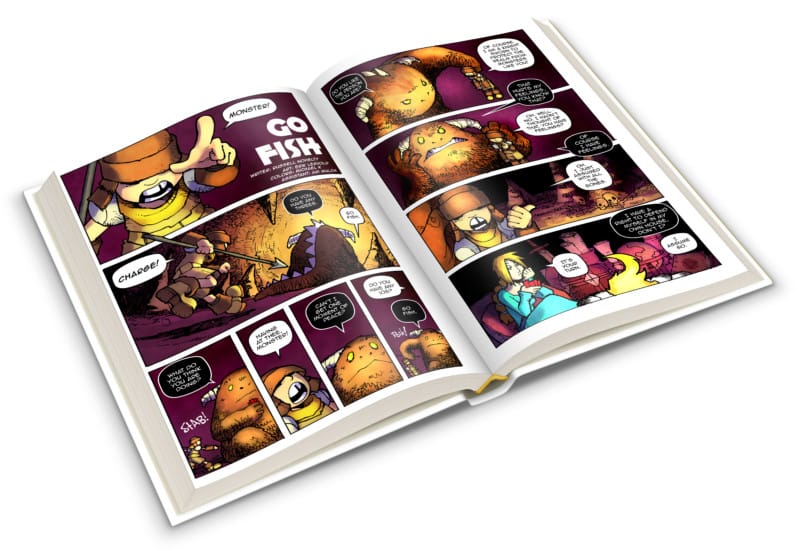 CV: From the success of ICHABOD JONES: MONSTER HUNTER in 2014 to meeting your first stretch goal now, what is next for Wannabe Press?

RN: Since we started Wannabe Press, we’ve always wanted to do more novels and courses, so that’s what’s on the horizon for us in the near future. We’ve released a couple of books in the past, and we’re going to keep releasing them, with more graphic novels and anthologies. I’m also looking forward to publishing other people’s books. We’ve been so focused on my properties so far, and we hope this anthology is the first step into opening our line to other amazing creators.

We’ve been very lucky to raise over $20,000 for this anthology so far because that mark also means we are going into production on volume 2 of the monster anthology. Called CTHULU IS HARD TO SPELL, the volume will be about gods and monsters, specifically the Lovecraftian Old Gods.

READ: Take a look at another Kickstarter we love at ComicsVerse: BINGO LOVE

CV: Can you tell me a bit about your earliest exposure to horror and monsters?

RN: I was watching FRIDAY THE 13th and EVENT HORIZON when I was ten, and I’m sure I was reading about them before that. My mom wasn’t a big fan of horror, but she allowed me to watch against her better judgment. Luckily, I turned out alright, if not a little obsessed with monsters of all types.

I also watched a lot of GODZILLA and KING KONG back in the day. I was also watching SESAME STREET as a child, and there are all sorts of monsters in there. That’s the great thing about monsters: when you start thinking about it, you find them everywhere.

CV: I know you love all forms of monsters but do you have a personal favorite?

RN: I get asked this a lot, and my answer keeps changing. Honestly, I don’t. I love the concept of monsters more than anything. I love that they can represent anything, at any time. They can be internal fears or external pressures. I like cuddly ones and scary ones. I have, for my entire life, been fascinated by religion. If I have to pick a favorite monster, I suppose I will say, God.

CV: Is there anything you would like to add, something about the project you’d like to put out there you haven’t before?

RN: I’ve been talking about this book for a long time and I can’t believe there’s anything that I could say that I haven’t said before. Just know it’s a 224-page hardcover anthology about monsters. It’s not a horror anthology. It’s a monster anthology. We cover the gamut from cute to scary and everything in-between. Since we’ve passed $20,000 we unlocked glow-in-the-dark eyes for the cover and we’re working on a massive digital print bundle now for when we hit $24,000. Our goal is to make the biggest, baddest monster anthology that’s ever been published in the history of the world. I think we’ve accomplished that. I hope you agree and check it out at www.monsteranthologycomic.com.

Make sure to visit the Kickstarter page here for all the updates and to become an official backer of MONSTERS AND OTHER SCARY SHIT: A MONSTER ANTHOLOGY!  The campaign ends on April 7, 2017. You can follow Russell on twitter @russellnohelty & his site www.wannabepress.com