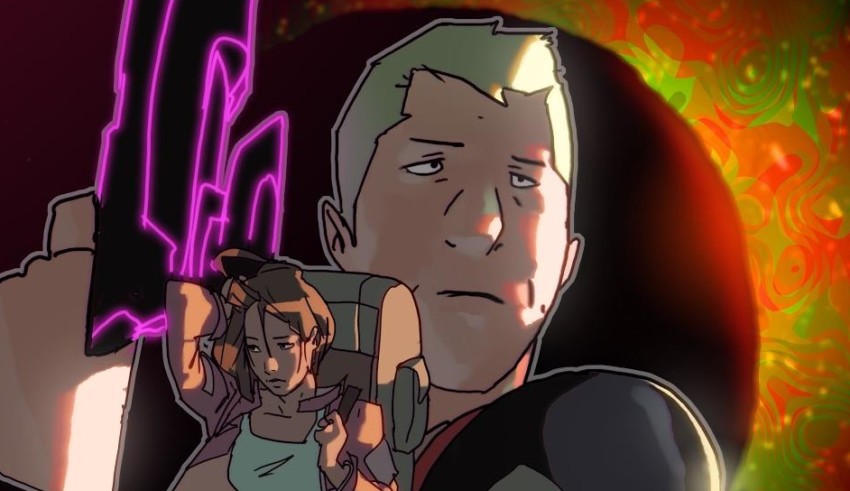 EARTHBOUND Is a New Kind of Sci-Fi

EARTHBOUND is an engrossing sci-fi epic. From new independent publisher Narwhal Press, the webcomic stands out with its high-concept plot and excellent world-building. In the few issues that have been released so far, EARTHBOUND has fleshed out its universe in a way that takes other comics decades. EARTHBOUND creator and Narwhal founder, Per Berg, was kind enough to discuss the comic and his process with us.

ComicsVerse: Can you tell us a little bit about yourself and EARTHBOUND?

Per Berg: My name is Per Darwin Berg. I’m from the Seattle area, a town called Sequim. My first comic was [written] in high school. It was so bad. Flash forward: I’m 30 now, and I knew it was now or never to start jumping into big projects. I’m putting out a graphic novel in parcels on my content blog, EARTHBOUND. We’re up to 75 pages.

[EARTHBOUND] centers on Julia and Spaceman, two [alien] mercenaries sent on a mission to Earth to recruit five dangerous warriors. Whoever recruits three of the five, for a best of five, shall win their freedom. Among the targets is Spaceman and Julia’s ex-partner[…]Wiz Kid, who will be the tie-breaker in the competition.

How a Movie Script Becomes a Comic

CV: What was your inspiration for the comic?

PB: EARTHBOUND started as a low-budget horror movie script about 8 years ago; co-written by myself and filmmaker Louis Doerge. That script was called SNIPER RIFLE WIZ KID VERSUS PSYCHO MOVIE KILLER. We had nibbles of interest here or there, nothing serious.

One producer in Hollywood expressed interest but wanted us to make it a.) more like GUARDIANS OF THE GALAXY, b.) no budget constraints, and c.) it had to establish a potential franchise. (In hindsight, I find these notes hilarious). Lou was busy with his movie NIGHT OF THE BABYSITTER so he handed me the reigns on the WIZ KID rewrite and I wrote EARTHBOUND. Nothing came of the interaction with the producer, but in the end I had this script.

READ: Our Saif Alnasseri interview about comics in Iraq and speaking out against oppression!

CV: Your art style seems to be influenced by manga and classic sci-fi. What was your approach to drawing this comic?

PB: My work is still developing but has definitely been heavily influenced by European comics, which can be a mix of manga and American styles. My favorite comic artist is Bengal, a master French artist. I discovered him through Magnetic Press, a label dedicated to translating great works internationally and bringing them to the American market. In general, the European comic style is more color-oriented, and the American one is more ink-oriented. EARTHBOUND is drawn digitally and quickly, sometimes too quickly. I wanted it to look [as much] like an animated TV show as much as possible. I have some 2-D animation training.

CV: Earthbound has its roots in stories like THE HUNGER GAMES and BATTLE ROYAL. What was your plan for expanding on these well-known properties? What aspects drew you to this genre?

PB: EARTHBOUND is similar not in a sense of the authoritarian themes, or the concept of a violent lottery. Actually, both those stories are natural extensions of a short story called THE LOTTERY [by Shirley Jackson]. And just today, United Airlines held a lottery to see which four customers would get kicked out of a packed plane, and one man was dragged kicking and screaming from his seat. Authoritarians like violent lotteries because it turns standard existence into a random reward. Randomly reinforced rewards are addictive and habit forming. This is how you train dogs, for example. In this case the habit would be submission and gratefulness to the Airline, as a flyer on that plane who isn’t picked to be dragged from his seat will have a shot of dopamine associated with the experience of not being picked and the ensuing relief… anyways EARTHBOUND isn’t about that.

The similarity with EARTHBOUND is both those stories have a simple concept that sets up a mission or a competition, and the ‘story’ is just the competition playing out, with a focus on the characters.  You simply follow the ensuing friendships, betrayals, all the varying strategies they employ. That is the story.  The genre could be called the “mission/game genre.” I’ve heard it called the “men on a mission” genre before. THE RUNNING MAN, THE DIRTY DOZEN, ESCAPE FROM NEW YORK, DAWN OF THE DEAD, and whole arcs of the great anime ATTACK ON TITAN definitely apply.  You could conceivably make a game of capture the flag a good story if it has stakes, characters, interesting strategies, etc. EARTHBOUND is just that.

Spaceman and Julia are sent out on this mission in competition with each other, and we see how it plays out. Instead of authoritarianism, EARTHBOUND’s subtle overarching theme is free will. I’ve heard that free will is an illusion from some very smart people. But the concept that you can “lose” it means there must have been something there to begin with, like with the Borg in STAR TREK. EARTHBOUND definitely plays with that.

READ:Like stories where fantasy and reality collide? Here’s our thoughts on the film THE TRANSFIGURATION!

CV: What are your favorite comics and why?

PB: My favorite two comics are Y: THE LAST MAN and the manga BERSERK. Both those two are examples where I’ve thought to myself, “This is better than movies and TV, even better than novels.”  I think it’s awesome comics have that potential to be so good. With those two I started deliberately rationing my intake [of those comics] because I could sense the impending existential void on the horizon when I finished them. CALVIN AND HOBBES is also like that.

The Future of EARTHBOUND

CV: What can readers expect from future volumes of Earthbound?

PB: Spaceman and Julia’s mission will play out further. They employ different strategies. Julia gathers intel and tries to build a precision team. Spaceman just recruits an army of underlings willy-nilly. At this point, the story is about 1/3 complete, with the potential to franchise because of the note from that sketchy producer, heheh.
CV: Besides Earthbound what other projects are you working on?

PB: I have some scripts in development and I’m also the artist on a project that should come out through a publisher in fall of next year. It’s a graphic memoir of a medic in Afghanistan.

CV: Where can readers find your work?

PB: My content blog where you can find EARTHBOUND as well as some original shorts and fan comics, including a MAD MAX one and a BATMAN one: https://narwhalpress.wordpress.com/; Facebook: https://www.facebook.com/NarwhalComics/; “pdb212” on Instagram for works in progress, behind the scenes etc. And at the moment my only foray into funding on the indie side of things, Gumroad (there’s just one product there now, a themed sketchbook with an essay about CTRL + Z for a buck): https://gumroad.com/narwhalpress.

The next chapter of EARTHBOUND will be released August, 2017.