This past month at NYCC 2015 I had the chance to interview writer Mike Kingston, author of the pro-wrestling centric title HEADLOCKED. As a long time fan of pro-wrestling, it was a big thrill for me to speak to Mike surrounded by wrestling greats Mick Foley and Shane “Hurricane” Helms at his booth. 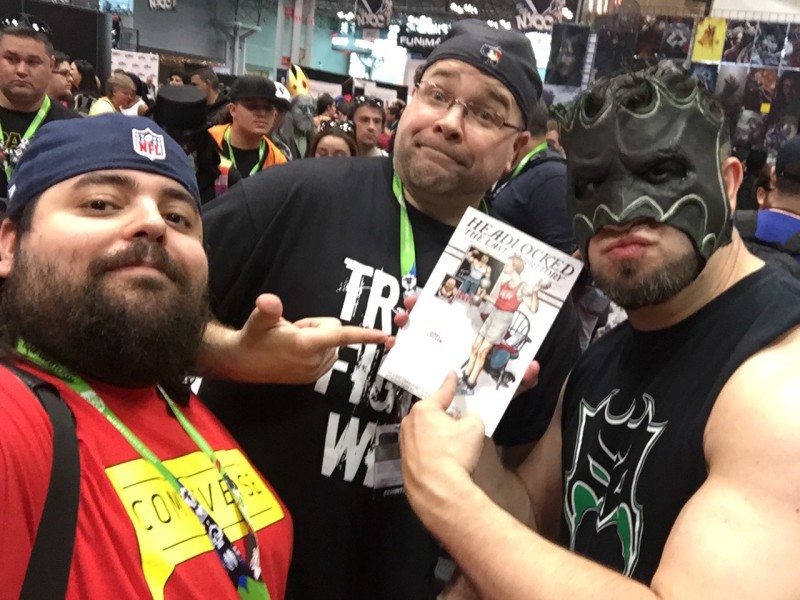 Kingston: It’s been a little insane. We’ve been pretty much shoulder to shoulder since the show started.

I can see that. You have a pretty packed booth right now, which I’m sure is partially due to the fact that Mick Foley and Gregory Helms are both signing. Did you anticipate crowds being this large?

The reason you’ve got two wrestling legends at your booth today is that you do a wrestling-based comic.

Kingston: Yeah, I write a book called HEADLOCKED. It’s about a theater major in college who falls in love with wrestling unexpectedly, and decides he wants to become a wrestler. He quites school, and the book follows his journey through the business starting at day zero. It’s kind of an AMC style drama. All the art in the book is done by wrestlers as well.

Now, I myself am a big professional wrestling fan, but many of our readers may not be familiar with the business. What is it that drew you personally into doing a pro-wrestling comic?

Kingston: I’ve been a wrestling fan and a comics fan since I was eight years old, and every time a wrestling comic would come out I’d buy it on release day, but they were always kind of s*****. They were never the book I wanted them to be. A lot of people like to bitch about things when they’re the way they don’t want them to be, I decided to make my own book, and make it the type of thing that I thought people would want to read. I work another job, but I’m on the road every weekend at cons and wrestling shows just trying to get in front of people and luckily we’ve done pretty well with it. 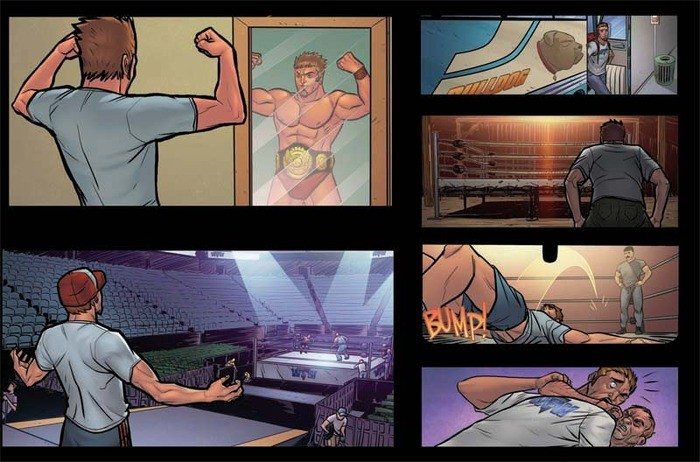 You said yourself that you work a lot of cons and independent wrestling shows. Do you notice a lot of crossover in the fandoms between comic book fans that wrestling fans?

Kingston: There’s definitely a big crossover. Just looking around here I’ve seen a ton of wrestling shirts so far, and there’s always somebody wearing a comic book shirt at wrestling shows. It’s larger than life guys in tights fighting other larger than life guys in tights in good and evil stories. There’s too many parallels to not have a crossover fandom.

Total honesty, I wore a CM Punk hoodie hear today, so I think I fit into that crossover quite well. (Laughs) I know a lot of the art in the book is done by wrestlers. Can you elaborate on that a bit?

Kingston: Well our covers are done by Jerry “The King” Lawler, yes that Jerry “The King” Lawler (legendary wrestler and color commentator). The interiors are done by a Samoan wrestler named Michel Mulipola who wrestles under a mask. Ken Anderson, also known as Mr. Anderson  to various people, has done art for the book. Sam Shaw from TNA, Booker T has done art for the book, Tony Atlas has done art for the book. A bunch of other guys have done stories. John Morrison, Hurricane, Rob Van Dam, AJ Styles. I’ve been really blessed. The wrestlers really appreciate the way I’m handling wrestling in the book, and the guys who like comics really wanted to be a part of it. 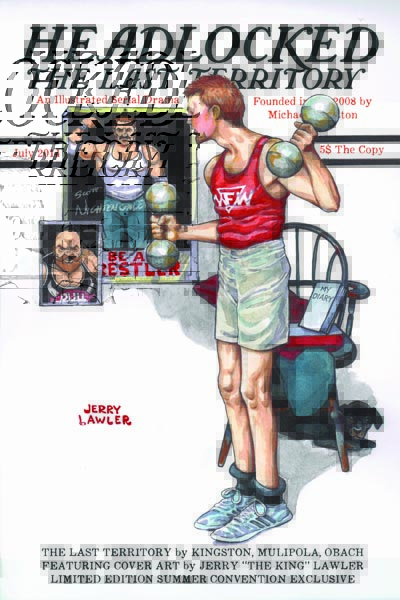 That actually spring-boarded into my next question. Beyond those wrestlers that you’ve worked with directly who’ve contributed to the book, have you gotten a lot of feedback from others in the business?

Kingston: Actually a lot of people. Usually if somebody tells me they like it, I try to hit them up for a story (laughs). The best compliment I’ve gotten, because I’m writing a story about a kid breaking in, was from Doctor Tom Prichard, whose widely regarded as one of the better trainers in wrestling. He really liked it, and he said he found it very authentic. I felt like if I could win him over, I must be doing something right.

I understand you’re also doing a panel here tomorrow night, and it will be released as a podcast correct?

Kingston: It will be, yes. NYCC has a 20% panel acceptance rate, and this is our fourth attempt after being rejected the last three years and we finally got it. Sam Roberts is going to host it. It’s going to be myself, Jerry Lawler, Hurricane, and Jill Thompson. He’s (Sam Roberts) is going to record it, and it’ll be released on his podcast.

What other upcoming projects, perhaps new HEADLOCKED books would you like to let our readers know about?

Kingston: HEADLOCKED: THE LAST TERRITORY VOLUME TWO is about four to six weeks away from completion. That has art from Booker T, and stories from John Morrison, AJ Styles, and Frankie Kazarian. We’re also lining up names for future editions, including MVP, Samoa Joe, and The Young Bucks. I’m in talks with some other big names as well. We’ll probably be running our next Kickstarter in March. You know, Kickstarter is really the lifeblood of our series. It’s how we get produced independently. The people who back us through Kickstarter get a better class of book than anybody else. We don’t sell the Kickstarter exclusive books at shows, we only give them to backers.

As a creator who uses Kickstarter, do you have any advice for aspiring creators who’ve thought of going that route?

Kingston: It’s not a money tree. It’s a s***-ton of work. Schedule as many interviews as you can in advance to promote it. Me personally, I used a paid PR guy last time and it was worth every penny. I can’t emphasize how valuable awareness is. I’m lucky that I’ve got famous wrestlers and celebrities working on it. You can never beat the drum hard enough. If anybody wants to find me on Facebook, or talk to me on Twitter I’m always good to give advice. it’s a great tool if you use it right. I’ve seen a lot of people use it horribly, but if you use it right it can really help out.

For people who missed out on the Kickstarter, where can they find the book online?

Kingston: Everything associated with the book is HeadlockedComic. Website, Facebook, Twitter, Instagram. It’s all me, so if you hit up any of those things I’ll be on the other end of it. You can order the books online, if you see me at shows as well. I have my schedule posted, usually as the cover page to my Facebook. Keep an eye out, check us out online, we appreciate all the support. If you know anyone whose into wrestling or comics, let them know what we’re doing. Awareness is how we grow.

Fantastic. Thank you so much for joining us, taking time out of your very busy day and schedule here at NYCC.

Kingston: Thanks so much for having me, I appreciate it.

My thanks to Mike Kingston again for his time, and be sure to check out HEADLOCKED online. Also, if you have any thoughts about this interview, please let me hear about them in the comments below or on Twitter @Comicsverse.