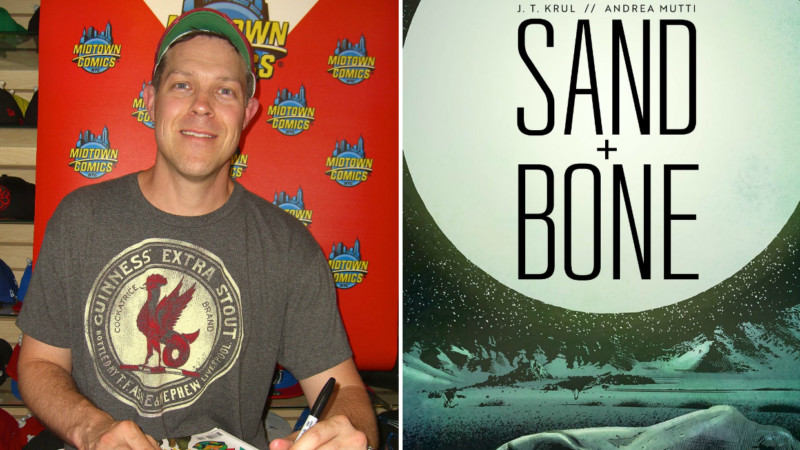 I once was told that a comic book is never just a comic book. I don’t believe that’s true, but I get the point: there is always a deeper message. A bad writer makes a comic feel like it’s just a comic. A good writer alludes to a bigger picture using the comic medium. A great writer devours you whole then spits you back out, your head now full of new ideas and soul with new feelings. J.T. Krul is a great writer. SAND+BONE, the graphic novel he wrote with artist Andrea Mutti and colorist Vladimir Popov, is a great comic.

SAND+BONE is about Sean Hitcher, a soldier who returns home to Bangor, Maine with PTSD (Post-Traumatic Stress Disorder). Sean’s homecoming is callous and cold. No one in his town cares about him except for his ex-girlfriend, the local pharmacist Hannah. After his veteran’s insurance falls through, Sean stops taking his pills. As a result, he suffers from flashbacks and occasional blackouts. What happens while Sean blacks out? Horrible things. SAND+BONE is not only a reflection of our inner demons but a reminder of how we treat our veterans. It makes us question if putting soldiers through war is even worth it.

I was lucky enough to speak to J.T. and get him to shed some light on his latest accomplishment.

ComicsVerse (CV): Why does SAND+BONE have to take place in the present day? Some of the themes and issues you’re talking about in the book — like war — have plagued us for some time and, unfortunately, don’t look to be leaving anytime soon. Was there any consideration in having the story take place during a different war or a war that hadn’t yet occurred?

J.T. Krul (J.T.): Part of what makes this story work is how closely it is grounded in reality. We wanted to make it as real and accessible as we could and then start pulling back the layers. Plus, the issue of PTSD is rampant today. The invisible nature of the psychological disorder mirrors the underlying danger in the story.

CV: The book takes place in a Midwestern town, but it seems like Sean could wreak more havoc in a city. Was it always the plan to keep him contained to a smaller town?

J.T.: It was. The reason for this was two-fold. One, I grew up in a small town in Michigan, so perhaps by default, I sometimes resort back to my own “Bangor, Maine” [hometown of Stephen King, writer of horror novels set in small towns,] if you will. But secondly and most importantly, I wanted Sean to be struggling in a familiar place — in a place where it is harder to fly under the radar. In big cities, it’s so easy to be alone and somewhat invisible. In a small town, the support system is right in front of him, but not really there in the way he needs. 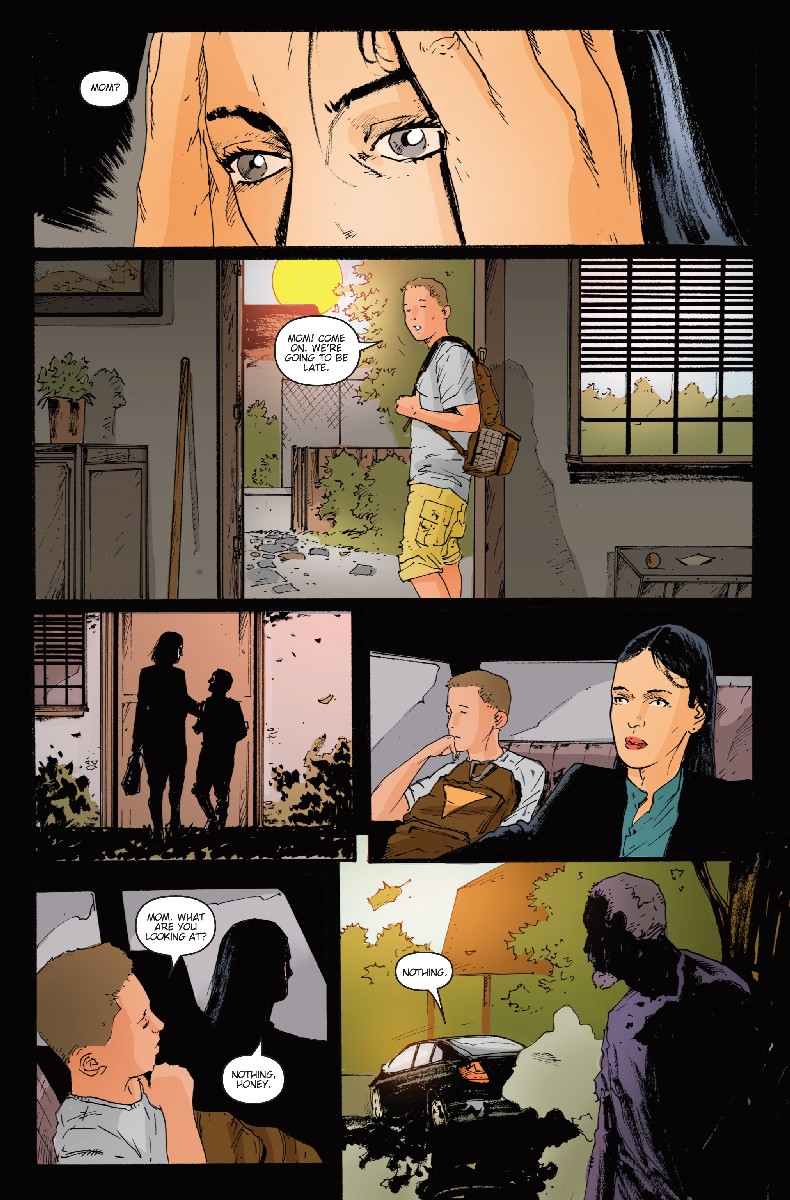 CV: Sean says the town gives him a false sense of support. It feels like everyone is out to get him — except Hannah. All things considered, Hannah seems pretty understanding. Was there a need to give Sean a character that would show him loyalty?

J.T.: I felt Hannah needed to be someone Sean had a history with in order to allow him to open up to her about such personal issues. With everything he is dealing with, it didn’t seem like he’d allow himself to be so vulnerable with somebody new. The town does indeed give him that false sense of support. On the surface, it’s the same town he grew up in, filled with familiar faces, but his experiences overseas on the battlefield create an invisible barrier — he is unable to connect with them in any meaningful way really. The smiles are there, but they are distant.

READ: Like supernatural/fantasy stories? Check out our analysis of LADYCASTLE!

You Can Never Go Home Again?

CV: I love the use of flashbacks in SAND+BONE. They’re short, informative, and they feel like uncontrollable memories. They don’t disrupt the story: they disrupt our protagonist. How did you decide what was important to give to the audience right away?

J.T.: We didn’t want to use it too much, but…that came from interviews I did. I heard about the weird and random triggers that would take them back to the war. For Sean, I wanted him to experience [triggers] in such ways. For example, the rain. There he is, sitting by the window at night as raindrops tap on the glass. That tap, tap, tap brings to mind the sound of machine gun fire from his days in the desert.

I didn’t serve [in] the military, but I called upon my own personal experience. I remember the weeks and months following a good friend’s passing. I’d be going about my day, and for a brief moment, I’d pretty much forget about his death as my mind got occupied with other things. And then, all of a sudden, I’d remember, and this wave would wash over me. In a way, it was almost like experiencing that day anew. That is what it is like for Sean. He’s trying to get on with his life, but his memories are always there, lurking in the background, ready to strike.

CV: Were the pills helping Sean in a greater sense? Were they subduing his PTSD?

J.T.: The pills were definitely helping to dull his senses and keep him a bit more subdued, so in that respect, it was helping to tamp[er] down what was building inside him.

CV: When you were writing this book, did you research veterans or interview them?

J.T.: I did research actual veterans. Working in the comic industry, I have had many an opportunity to meet service men and women at conventions. Sometimes, they were on leave, and other times they were finished with active duty. I remember talking with several who dealt with unexpected additional deployments. I talked to them about their time in harm’s way, as well as the challenges of readjusting to life after war.

CV: SAND+BONE is about PTSD, war, and veterans as much as it is about the twist at the end of the book. Was it a conscious decision to have Sean return from the war physically unharmed and instead focus on the psychological trauma? I ask because when he blacks out, he is extremely physical even though he remembers nothing.

J.T.: That’s it exactly. Not to give anything away, but like I said, the burden that Sean carries mirrors the onset of PTSD. On the outside, Sean may seem totally fine. A hardened soldier who has seen his share of action on the battlefield, but one who returned with all his limbs intact. The scars and wounds of his war are all internal, or so it seems.

CV: I don’t want to assume that as a writer you’re putting all your personal views into the story, but how do you feel we treat veterans in this country?

J.T.: To some extent, I think all writers put their personal views in the stories they write. The way we as a nation care for our soldiers and our veterans is somewhat appalling. The VA [U.S. Department of Veterans Affairs] seems woefully underfunded or ill-equipped to deal with the task at hand, and too many men and women are falling through the cracks and literally dying. A study done in 2013 found that more than 20 veterans committed suicide every day. And, another study around the same time found that nearly 50,000 veterans were homeless. It’s shameful.

And to make matters worse, the whole “support our troops” mantra is worn like a badge of honor. That’s not to say people don’t believe in our troops or support them, but I wish more were being done for their health and well-being. Waving flags, showcasing yellow ribbons on our cars, and cheering for an actual soldier before a sporting event is all well and good, but I think they’d rather have better healthcare, counseling, and employment opportunities. 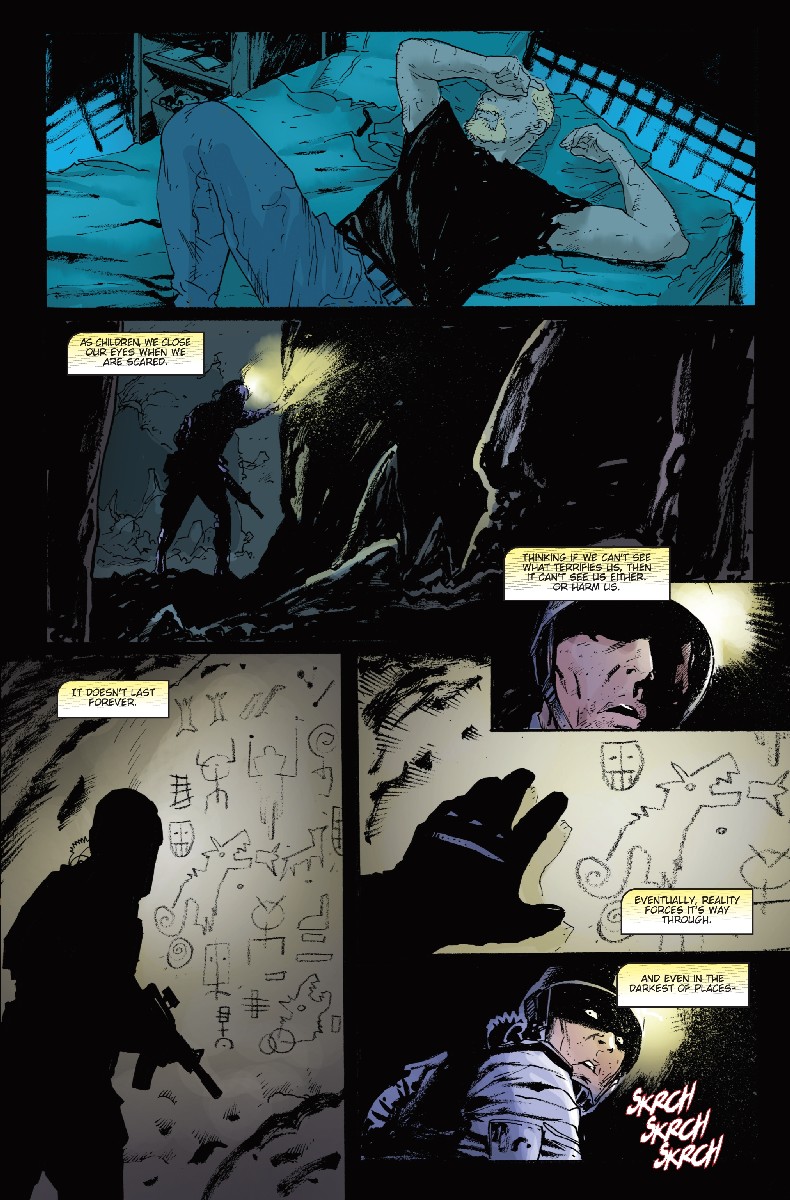 READ: Representation Matters! For more comics dealing with PTSD, check out WE ALL WISH FOR DEADLY FORCE!

Making of A Nightmare

CV: What makes illustrator Andrea Mutti and colorist Vladimir Popov the perfect teammates for this book?

J.T.: Andrea Mutti and Vladimir Popov did an amazing job on SAND+BONE. Jimmy Palmiotti and Justin Gray are working with the graphic novel division at Adaptive [SAND+BONE’s publisher], and they were the ones first to recommend them. Andrea’s thick, dark style matches the tone of the book perfectly. So much of the drama and mystery lies hidden in the shadows, and he really brings it all to life. You can feel Sean’s anguish on each and every page. And, Vladimir’s colors complement his work wonderfully. The way he’s able to give a certain grittiness to even the brightest colors really helps to add another layer of texture to the page.

CV: C’mon, be honest…do you have a sequel planned? I want more.