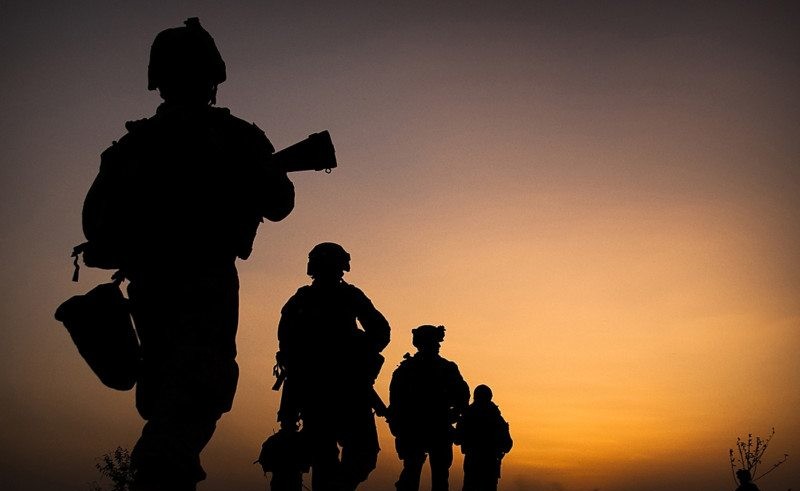 With the slow death of the newspaper industry, comic strips have become more and more of a rarity. Grabbing the comic section of the local newspaper and reading about the adventures of Garfield or Calvin and Hobbes was once a constant in many of our lives. Sadly, that tradition has become lost on younger generations. Jeremiah Dinsmore is helping keep some of that comic strip magic alive, while also making a lot of people laugh with his online comic strip USMC-POGS.

Jeremiah is a veteran of the armed forces. A former Marine; Jeremiah has built quite the comic storyline following the adventures of fictitious military POG’s, and has amassed a sizable fanbase since starting the strip 2 years ago. We recently had the pleasure to sit down with Jeremiah and discuss his strip.

ComicsVerse: When did you first become interested in comics?

Jeremiah Dinsmore: My first exposure to comics was the Sunday funnies as a kid. Calvin and Hobbs, Garfield, and Foxtrot were religion to me. I preferred short jokes vs long storylines and so those always stuck with me; probably my short attention span.

CV: Did you always have aspirations towards becoming a comic creator? Or was it something that just developed over time?

JD: It wasn’t anything I planned, although I’ve been making comics for a long time. I was a preteen (12-13 years old) when I created my first comic. It was a crude stick figure comic I called “The Big Thing from the East”. The storyline consisted of a large creature that killed and devoured everything. I would have it kill anything that seemed funny to me: Godzilla, Sonic, Mario, etc.
Later on in high school I made stick figure comics based on movies I liked. So I created comics like Stick Wars, Mutant Stick, Stick Ninjas… these were just as crude; including stick figure sex scenes. I would share them with classmates whether or not they liked them.
After high school I joined the Marine Corps. There I created a series of stick figure comics called “The Adventures of Dinsmore and Boots”. I centered it around me and another platoon member. These were even cruder and focused on anything I experienced while in the Marines. Before I put the comic I have today online, I had a friend teach me how to draw; I was determined to translate my stick figure work into actual cartoon characters. It was another friend I worked with who convinced me to put what I was doing online.
CV: Where did the initial idea of making a comic based on military POGS come from? Could you also explain what a POG is?

JD: Well a POG is actually a derogatory term used in the Marines (other branches of the military use the term as well, I believe). It stands for “Personnel Other than Grunt.” In the Marine Corps you can break every Marine down into basically two categories; you’re either in the infantry or you’re not. Anyone who isn’t is considered a POG.

The irony is I was actually in the infantry when I was in the Marines, so everything I create is pure fiction. I have no idea what administrative Marines do, which is why the comic is so much fun. I don’t feel restricted to making things realistic.  The characters themselves are based on an amalgamation of people that I know and myself (mostly myself).

READ: Get ready for the trials and tribulations of another school year with our write up on the cult classic BATTLE ROYALE!
The initial idea was something I had played around with while in the service, I just didn’t have the characters for it. It wasn’t until my friend Cristina showed me how to draw that I was able to create the characters of POGS. Me and Cristina would spend hours drinking coffee and just doodling.
I didn’t want to make a comic that was just a slam on non-infantry personnel. POGS was never that for me. I use it mostly to parody my own life and experiences; so 99.99% of it should not be taken seriously. I don’t want anyone to read my comic and think that this is how the military is. Every so often I will throw in some inside military humor, but for the most part the rest of it is ridiculous nonsense.
CV: When did you first start publishing your comics online? When did you start noticing that you were building a fanbase?
JD: I first started publishing over two years ago (with delusions of grandeur). It’s taken me a very long time to get the website to where I want it to be. It’s gone through many changes since. As far as a fanbase (I laughed out loud as I typed that), I’m trying not to focus on that at this point. I do have people that visit my site periodically but I am decades away from having the type of notoriety as Terminal Lance.
Drawing for me has always been a way for me to vent frustrations in my day-to-day life. Anything that makes me laugh I will turn into a comic, if I can.
CV: Have you gotten any feedback from other veterans about your comics? Any former POGS given you input about their representation?

JD: I have and it’s always been 50/50. They either love it or hate it.  The acronym POG is still very taboo in the Marines; it’s not a word you throw around lightly.  I love that you referred to them as POGS (ha). As far as their “representation” I don’t think the administrative side of the Marine Corps would want me to be the one to represent them. I guess they don’t have a choice now.

In all honesty I don’t really consider myself someone who represents the Marine Corps. Yes my comic is military themed, but I’m not trying to make a statement. There is definitely a lot of dark humor in what I write and draw, but my comic is mostly mindless fun.
CV: Have you ever approached a newspaper to possibly run your strip, like Calvin and Hobbs? Or do you plan on continuing to build your presence online?

JD: I wouldn’t be opposed to the idea of printing my comic on something that was nationally read; I honestly don’t believe I could though, considering the type of material that I draw.

I poke fun at a lot of taboo concepts such as suicide and murder, and even the theme of my comic itself would never be run in any Marine publication like the Marine Corps Times. The Marine Corps as an organization frowns upon the idea of separating Marines into categories such as grunts and POGS.
More than likely I’ll continue building an audience online.
CV: Do you have any plans on starting other strips? Based on the military or other topics?

JD: You know I actually have already created a comic called “Area 50-What”. It’s about two underpaid aliens who hate their middle class employment as human harvesters. It pokes fun at modern day stereotypes and other random jokes. To be honest I lost interest in it and my heart just wasn’t there when I drew it, so I put it aside to focus on “POGS” and “Dinsmore and Boots”.

READ: Women’s new role in the military and what it means!
The comics I’m doing now though (POGS) have an eventual end. Whether you noticed it or not there is actually a progressive storyline. The characters do get older with each season, and eventually it will have a finale. What that will be is a surprise (that’s years away though).
After I finish POGS I’ll move on to something else. Whether or not it’s military related, I honestly don’t know yet.
CV: What’s the best response you’ve gotten from a fan?
JD: I’ve had people message me to tell me what their job in the Marines was and if I consider them a POG. The best job was a weather specialist. I still don’t know what it is but it’s the POGiest job I’ve ever heard of.
CV: What advice would you give to people hoping to start their own comic strip?

JD: For me, I didn’t know anything about making comics, or drawing, or web developing before starting. I drew stick figures until I learned how to draw from my friend Cristina. I had to teach myself basic HTML and CSS to make my website the way I want it. Over the past few years I have learned a lot from others to get my comic going, but I never allowed anything to slow me down.

My advice would be to not let anything slow you down. If there’s something you don’t know how to do, learn it.
If your interested in reading more about the adventures that Dinsmore and Boots get into, be sure to visit and read USMC-POGS here! For great insights from Dinsmore himself about what life was like as an enlisted man, visit the POGS Facebook here!