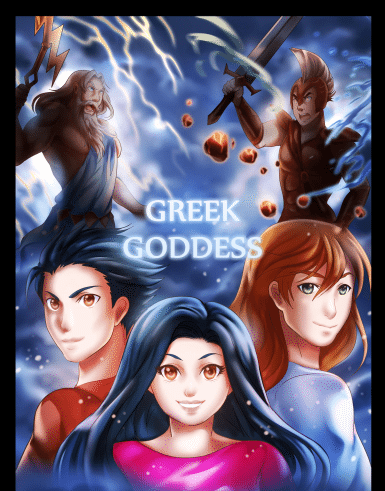 Greetings, denizens of the ComicsVerse! We were able to sit down with Eleni Romanias, the writer of GREEK GODDESS, a short graphic novel that follows protagonist Athena as she navigates every day life after learning that she possesses the spirit of an ancient Greek goddess. Artistically, GREEK GODDESS is the intersection of Greek mythology and Japanese manga, a combination I never thought I’d see. As one would expect, the result is quite interesting.

CV: GREEK GODDESS is your first comic. Can you tell our readers a bit about how it came to be?

ER: To be honest, I don’t exactly remember what it was specifically that gave me the initial idea for creating GREEK GODDESS but there were definitely quite a few different aspects of my own life that helped develop the story. First off, if you couldn’t tell, I’m Greek, haha. I’ve always had an interest in Greek mythology. Another influence was the fact that I was the colorguard captain in my high school’s marching band. When creating the main character in GREEK GODDESS, I wanted to incorporate that marching band aspect that’s typically seen as “geeky” or “unpopular” and see how I could work that into what makes her such a cool action hero. With the fight scenes specifically I wanted to show how the flag twirling in colorguard translates to wielding a spear once the goddess inside of her is unleashed. Knowing that a spear would be the most similar weapon to a flag, I researched warrior goddesses who used spears and immediately came across Athena. Athena was soon followed by Ares, then all the other mythological gods that make appearances in GREEK GODDESS. Everything else just kind of fell into place.

READ: Like Greek mythology? Check out our analysis of bi-erasure in Marvel’s HERCULES!

CV: As this is your first comic, how about giving us some insight into your influences? What are some of your favorite comics? If you HAD to compare GREEK GODDESS to some existing comics, what would you consider it to be similar to?

ER: My oldest brother was always a  big comic book fan. Growing up we watched a lot of classic superhero cartoons like Batman and the X-Men. Although I enjoy both the Marvel and DC universes, I’ve always preferred the visual style of anime/manga. Yu-Gi-Oh! and Sailor Moon were two of my favorites growing up, but once I decided that I wanted GREEK GODDESS to have that style as well, I exposed myself to a lot more. Sword Art Online and Fairy Tail are two more recent interests of mine. It’s hard for me to compare GREEK GODDESS to any existing comics, but if I HAD to compare it to something, I’d say Sailor Moon and Sword Art Online. It’s similar to Sailor Moon in the sense that it has that kind of campy/cheese comedic style, but in reference to Sword Art Online, it’s pretty action packed. 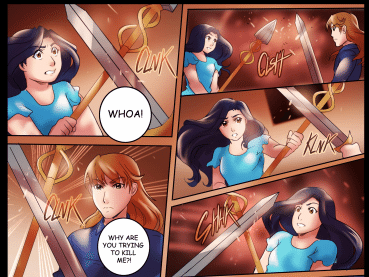 CV: When we spoke earlier, you said that GREEK GODDESS was originally a screenplay that you wrote and adapted into a graphic novel. What prompted this?

Once I started to write GREEK GODDESS, I wrote with the full intention that Athena was a character I wanted to play. I’m an actress, and being more of a plus-size woman, heroines in action films are characters I wouldn’t really be cast as. Being a younger plus-size woman, roles with my specific age and physicality are almost non-existent. I realized I could do one of two things: try to lose a ton of weight and look exactly like thousands of other actresses already going out for those types of roles (nothing against them, I’m just pointing out how hard it is in this industry when you’re being compared to so many others so similar to you), OR I could stay exactly as I am, and create my own action hero and story that shows it truly does not and should not matter what you look like to play or be, any kind of person. Especially with the promotion of body positivity and equality gradually becoming more mainstream, I felt it was time to introduce the world to a new kind of action hero. It wasn’t until after I finished the screenplay that I realized that it might fit with an anime style very well. To be completely honest, adapting the original script into a graphic novel was done in a rather impromptu fashion.

READ: Check out some of our favorite action/adventure manga!

CV: What was the rationale behind the way you directed artist Bryan Golden’s design of Athena?

Since I knew Athena was a character I would eventually like to play on screen, I had Bryan use me as a model for her.   In most comics it seems women are drawn either super skinny or very plus-sized. I haven’t really seen any in between. There is nothing wrong with either physicality, but I wanted the anime version of Athena to kind of be more just regular/average sized to further expand the available representations of women. This would also make the character more relatable and ease the transition into the notion that a plus-size girl such as myself portraying the character. I have to admit, it is also kind of really neat seeing an anime version of yourself! 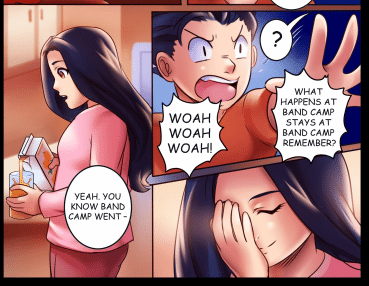 CV: Where can our readers find GREEK GODDESS, along with other work by Bryan?

ER: GREEK GODDESS is available on Amazon in all countries as well as at any Barnes and Noble book store. For links and more information about both the graphic novel and upcoming feature film, check out the official Facebook page ! As for Bryan’s work, check out his gallery on DeviantArt under the username “KagomesArrow77,” which can be found here.