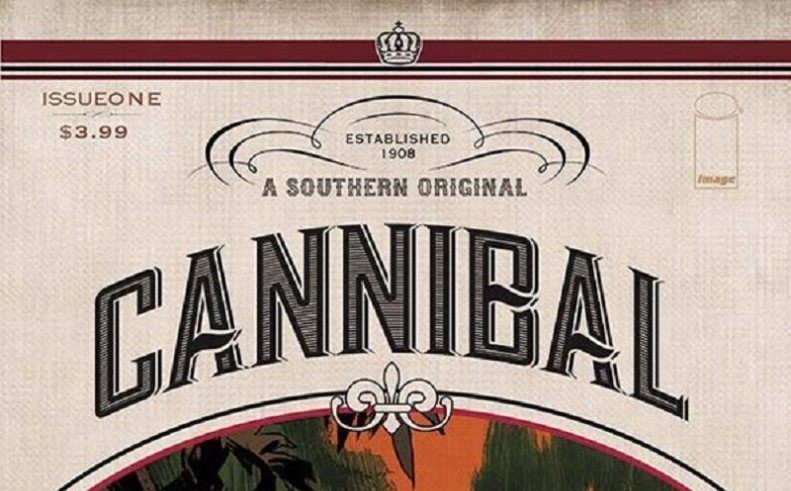 The cover of the first issue of CANNIBAL

From Image Comics comes CANNIBAL, a southern Gothic horror about folks afflicted with a virus that, when it flares up, makes them crave human flesh. From the minds of New York Times bestselling writers Brian Buccellato and Jennifer Young and artist Matias Bergara, we get the scoop on the process, ideas, and inspiration that went into the creation of CANNIBAL, and how they plan on scaring readers with this dark, entertaining read.

ComicsVerse: The art style is very interesting in CANNIBAL. Can you tell me what inspired the artistic elements e.g the choice of color palettes, backdrops, etc?

Brian Buccellato: Pretty much all of the credit goes to Matias Bergara. Jenn and I had a style in mind when we started looking for an artist for the book, and were super lucky to have found Matias. We give him a lot of visual reference in the scripts, but ultimately it’s up to him to interpret how he sees fit. As far as the color palette, I’ve been a colorist for so long that I don’t know why I choose the colors I do any more. I just do what looks good to me. I try to assign each scene an overall color value and go from there, and Matias will chime in with specific color ideas when he has them.

Matias Bergara: My intention when doing the art for CANNIBAL is to always convey lots of texture and raw emotion towards the reader. Sometimes it’s about the angle, sometimes it’s the brushwork or the composition. My goal – in the end – is to make it as intense and honest as I possibly can.

CV: The idea of a sort of “zombie” virus that makes people crave flesh in flare ups and leaves them completely sentient is extremely interesting. Where did the inspiration and decisions that went into how Cannibals work come from?

BB: CANNIBAL has been a passion project of Jenn’s for a long time. She came up with the concept.

Jennifer Young: It’s a story that I’ve had in my head for a long time. I wanted people to be able to truly connect with not only our heroes, but the threat as well. As in life, sometimes we are the victim and sometimes we aren’t. It’s not about cannibalism or zombification. It is about family and disease and illness and loss; just a darker more fantastical way of exploring that.

CV: You’ve got an interesting cast of characters. Are we going to see a mix of reoccurring characters and “short-story” characters that only appear briefly, or are we going to be following one of those formulas more than the other? Will we see a story from the perspective of a Cannibal at some point?

JY: My hope is to stay with these characters for as long as possible, even when what they are doing is influencing the story, not just the characters. I want to spend time with them and really show all the nuances of their lives as they deal with living with the virus.

CV: Is it your intention with CANNIBAL to raise questions about morality and the psychology of people put into the position that your characters would face? What do you hope readers get out of reading CANNIBAL?

BB: There are definite themes we will be exploring in the story, but we don’t intend to preach or hit anyone over the head with a message. At the end of the day this is supposed to be entertaining while exposing a little bit about human nature (as we see it).

JY: I want to create elevated horror that feels close to home. I want it to squeeze hearts but also maybe make you cringe a little.

CV: Where did the idea for CANNIBAL come from?

JY: It came from a lot of places. Mostly, simply put, it comes from human relationships that I’ve had. I’m old enough now that I’ve had my share of life experiences with other people. Along the way, I’ve learned how much truth lies in, ‘No Man is an Island.’

CV: CANNINAL is a Southern Gothic horror. Is it your intent to disturb/scare/creep people out with the gore and chills of the virus or are you aiming for something deeper and more personable to readers? Or a combination of both?

MB: I think CANNIBAL is about many of the darker aspects of the human condition when facing the unknown and the menacing on a personal and social level. Of course, there’s also lots of gory stuff and a very terrible thing spreading through a small community.

JY: I don’t think there will be too much gore. Maybe more mystery and fear. I always love to scare people, so if I creep people out, then great. I do want to create a solid piece of horror with all its tropes, however, I also want to touch on something deeper. Family. Community. Choice.

CV: Where did you draw inspiration from when it came to conceiving and creating CANNIBAL?

MB: I think of many movies and series set up in secluded rural and southern towns or places taken over by nature. Maybe DELIVERANCE, a bit of TRUE DETECTIVE, and some of Algernon Blackwood’s THE WILLOWS.

BB: I don’t really know. I’m inspired by everything I read or see or experience – it’s all food for creativity. Sometimes the inspiration is more direct and obvious and sometimes I have no idea where I pull inspiration from. Oddly enough, I see a bit of the TV shows BLOODLINE and FARGO in what we’re doing.

JY: THE BLACK KEYS, TRUE BLOOD, TRUE DETECTIVE, and BLOODLINE. I’m inspired by these sort of things. But the town I am from, that is emulated in the comic, is what inspires me most. The people in my home town are my inspiration.

CV: On a more personal note, what inspired each of you to become artists/writers/creators?

MB: I started considering seriously becoming a comic book artist after reading WATCHMEN and SANDMAN. I had been casually drawing as a hobby but only stories as good as these got me into wanting to do my own art. I’m an artist but writers have made the biggest impact on me on a storytelling level.

BB: I never really saw myself as a businessman type – wearing suits and going off to work. I’m a huge dreamer with a love of movies and comics. I grew up drawing a lot and went to an art high school because I knew I wanted to do something creative. But it didn’t take long for me to realize my own personal limitations as an artist. I was talented, but not as talented as I wanted to be. Eventually I started writing and felt I didn’t have any limitations at all. It was so much more satisfying, so writing became my passion.

JY: I think the desire to be a storyteller, in whatever medium, has always been a part of me. But obviously a lot of credit goes to the stories that I love. The ones that inspired me… like THE TEXAS CHAINSAW MASSACRE.

CV: Tell me a little bit about the history of CANNIBAL. What spurred you to create it? How did it get from idea to published work?

BB: Jenn is the editor of my other Image book, SONS OF THE DEVIL, and wrote a couple short stories for the first volume. So when I was looking to develop a new creator-owned Image book, she pitched me CANNIBAL.

JY: It’s been a passion project of mine for a long time. So obviously it was the first thing I pitched. Brian really got the story immediately, so I knew we were onto something. From there we mapped out the story together, hired Matias, and started working on it. We did a five-page sample and pitched that to Eric at Image. He said yes, and here we are.

READ: Our interview with Jamie Me on his new comic, QUEEN # 1.

CV: Do you have any plans on collaboration with other writers/artists down the line? If you could pick anyone to collaborate with, who would it be?

BB: I’m open to anything. But haven’t thought that far into the future. I’m still trying to catch up on all the work I have now.

CV: How does it feel to get CANNIBAL into print?

MB: It’s awesome and thrilling for me since I’m not new to comics but I’ve just recently gotten into US publishers, coming from mostly South American and European books and illustration books. It’s my first Image book and I can’t wait to see it released!

JY: It’s really satisfying. It sort of validates the original feeling of having a story that I felt was important enough to be told.

CV:  If you could give any advice to aspiring artists/writers/creators out there, what would it be?

BB: Keep doing it. Writing, drawing, whatever. The only way to grow and improve is by doing. Take the time to develop your craft and be open to constructive criticism regarding your work. Don’t make excuses, listen to advice, and figure out ways to improve. Also, don’t just say you’re an artist or a writer – actually do it. And then hit the comic conventions and surround yourself with like-minded artists/writers. It helps, and you just might meet some awesome people to collaborate with.

JY: Don’t be afraid to take every opportunity, meeting, or call. Even if you think you don’t need it or won’t like it – this includes that dinner with your old pal you haven’t seen in a while. Go see him/her. You never know where it will lead.

CANNIBAL is expected to hit shelves on October 5, 2016. and you can look here to find a local shop that will carry it.

If you want to find more information on CANNIBAL, Brian, Jennifer, or Matias, you can follow them on their social media links below: