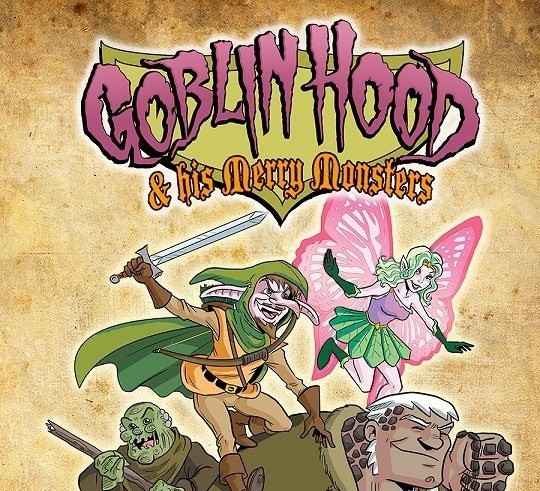 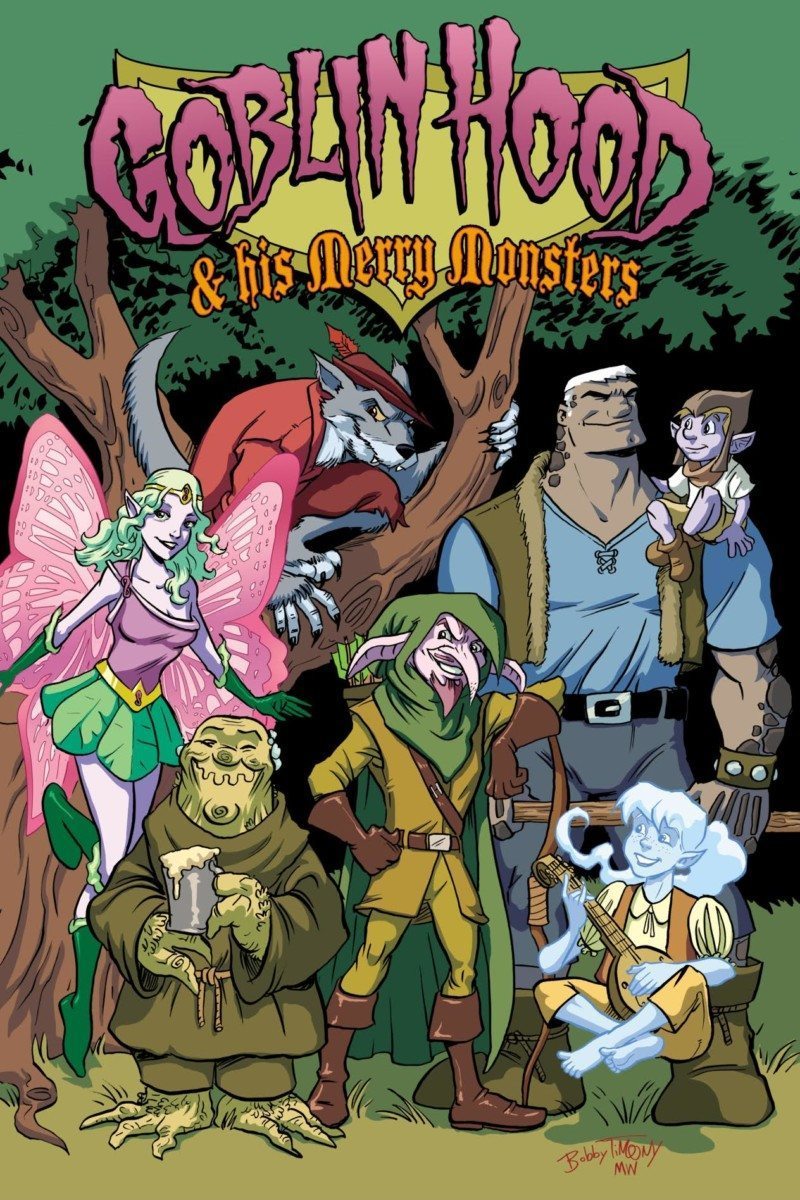 Hey, Comicsverse goers! I’m Nadia, meeting you for the first time as an Intern of Comicsverse. Together, we shall adventure into the depths of the ‘verse and explore a world of stories and storytellers! So our trek begins:

We’re meeting today with Bobby Timony, creator of the upcoming GOBLIN HOOD AND HIS MERRY MONSTERS!

Comicsverse: Bobby, thank you for your time today and congrats on the upcoming release! So from what I’ve been able to gather from your site, you have quite the impressive portfolio of work professionally—having worked with ad agencies to produce ads for things we know like M&Ms, Gilette—what got you into making comics?

Bobby Timony: Comics, I would say, is what got me into storyboards, honestly. From when I was a little kid, and I have a twin brother, we were always sitting in our rooms just making comics together. We’ve been reading comics since we were little kids. I remember when I was a kid, my house burned down and my mom asked me, “What was it you lost?” and I was like, “EVERYTHING!” and she said, “Yeah, but I need to know specifics.” My brother and I just cleaned our room the night before, and we had a stack of comics about two feet high. So I was like, “We got a stack of comics about this high.” And the next thing, she must have gone to the comic store I guess, she bought a whole long box full of comics, and it was such a magical thing. I remember there were Indiana Jones comics in there, and there was The Avengers and Uncle Scrooge. Uncle Scrooge was the first comic I subscribed to—I put a bunch of dollar bills in an envelope and sent it off—and amazingly there were comics in the mail!

CV: You initially debuted with THE NIGHT OWLS, your paranormal detective series you collaborated on with your brother, through DC. Can you tell us more about the story and about the magical experience of making your first professional comic?

I thought of the setting first—where do I want to set it? And another giant influence on me and my brother was the 1920s. I wanted to set my comic in the 1920s. And I definitely wanted to have a flapper in there. I started sketching characters, and the ones that I liked suggested personality and a storyline. It’s about a team of detectives that solve a supernatural crime. It’s got a very Sunday comics feel to it, and even though it deals with some macabre subject matter, we keep the tone pretty lighthearted.

CV: What are some other stories you’ve worked on? You have made others. Many others. We need them. We will flood the stores to find them. We will bring down servers with our want.

BT: [Slight chuckle. A laugh! I have made the amuse!] There’s been so many. I recently tried pitching a Wonder Twins idea and a Detective Chimp idea to DC, none of which came to pass. There’s a Laurel & Hardy book that I’ve been trying to get done, but it’s been hard to find a publisher who wants to publish a Laurel & Hardy comic. I made a story about a couple of orangutans, and then there was Detecto-Bot, who was a detective robot… there’s been a lot.

I actually won an independent book publisher’s award for MONSTER ELEMENTARY, which I collaborated with [Nick Doan], I did a couple pages in. MONSTER ELEMENTARY is coming out in comic shops in October, and it’s in the August previews, so you should tell your comic store you want that. MONSTER ELEMENTARY is a story about a bunch of monster kids who go to monster school. They’re happy there and then it gets shut down by the FBI, so they have to go to normal school. It’s a lot of fun and it’s hilarious, it’s kind of touching and heartwarming. I think those are the kinds of things that people respond to.

CV: You’ve even gone as far as receiving a Lulu nomination, been featured on MTV News, been nominated for Harvey Awards for your work. What is it about your stories that you feel compels readers to keep turning the page?

BT: I like to bring a sense of childlike wonder to my comics. I remember the times when I was a kid reading comics, and the sense of adventure and comedy that comics would elicit in me and I try to go for that. The trick is to find the stuff that you think would appeal to you, and if it’s something that you would continue reading, you have to assume that other people will too. 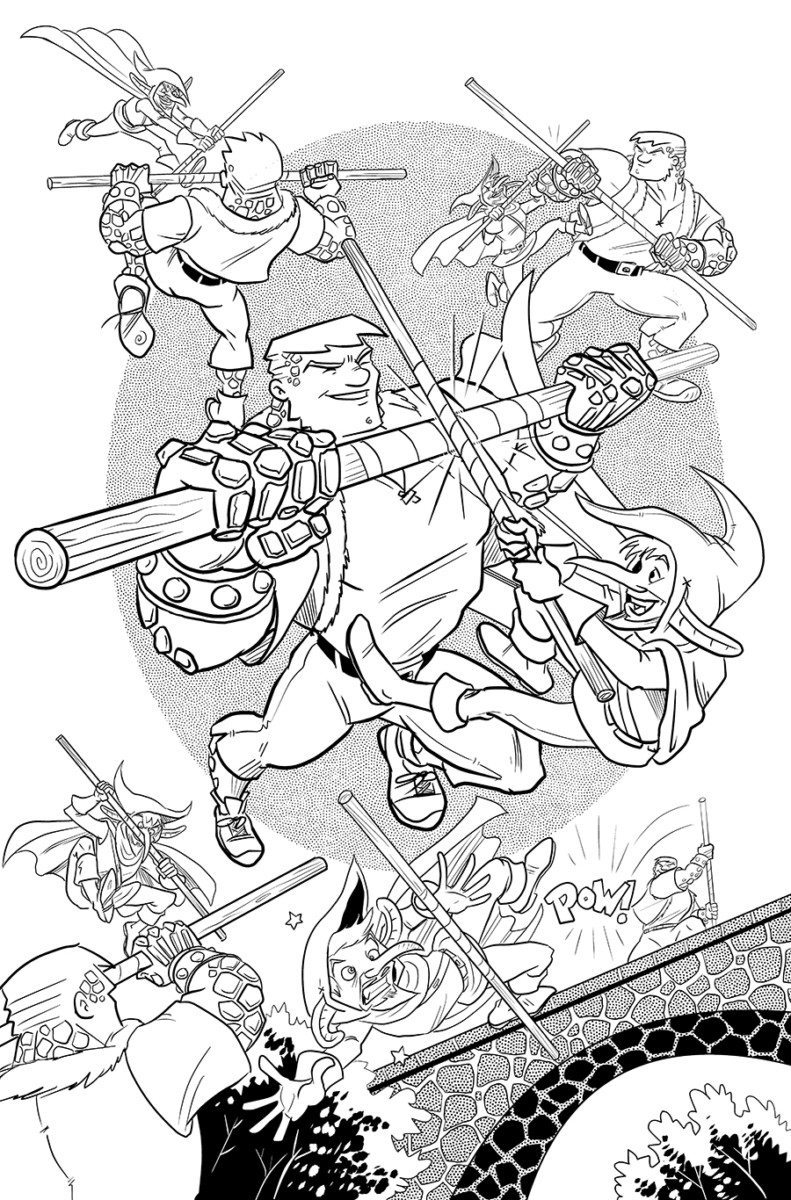 CV: So tell us about your latest creative trek through the woods, “Goblin Hood and His Merry Monsters!” I wonder if it’s anything like Robin Hood, harr harr?

And the more I thought about this idea, the more I started thinking in Robin Hood analogs, and eventually I was like, well why don’t I just adapt Robin Hood, but with monsters? And so that’s how that happened.

The graphic novel will be composed of short stories that make up a long story, kind of like the Robin Hood legend.

CV: Tell us about this cast of characters! Goblin Hood, Fey Faerion, Ellen O’Tale… What kinds of creatures are we to find in Knottyelm? What is Knottyelm like?

BT: Almost every character in the Robin Hood legend has a monster analog in GOBLIN HOOD AND HIS MERRY MONSTERS. You got Goblin Hood, who’s Robin Hood, obviously. He’s a goblin. And there’s Little Giant, who’s the world’s smallest giant, but still bigger than everyone else on the team. Will Scarlett from the legend is Spill Scarlett, and he’s a big werewolf. And then you got Alan a Dale, who in my legend is a banshee named Ellen O’Tale, and Maid Marian is a fairy named Fey Faerion.

Knottyelm exists in a world as parallel to the mortal world but not in it, just to the left a little bit—a land of faeries and monsters and things. There’s a big castle that’s built inside a giant tree, and that’s where the prince and the king live. There’s a bunch of farmholds all around it that are run by elves, and they in turn are plagued by monsters from the Sidhewood [Pronounced: SHE-wood], the forest that surrounds it and is filled with monsters that terrorize the villagers.

CV: I have one more question—Basil’s Garden. I greatly enjoy that you have bunny awareness on your site—if people like bunnies, and comics, and they check out your site, and they also happen to be thinking about getting a bunny and need to know what to and not to feed them, the universe has led them to the right place. Will Basil or other bunny folk make an appearance?

BT: That’s an interesting question—I hadn’t thought about that, but I might fit him in!

I was looking online for resources to figure out what to feed my rabbit Dewey, and I didn’t find a definitive site anywhere. I found sites with a lot of suggestions and so I decided to compile them in one place. It’s funny that Basil’s Garden seems to drive a lot of the traffic, because people are looking to take care of their bunnies. Basil is a character that I invented for a 24 hour comics day challenge, and in the challenge you have to write and draw 24 pages in 24 hours, so I wrote a comic about a rabbit who finds himself roped off in a showdown with a wolf.

I should probably also stress that I’m not a veterinarian. People ask me for advice on their bunnies, and while I try my best to help them from my own experience, in the end I always advise them to consult with a veterinarian.

Look out for more of GOBLIN HOOD AND HIS MERRY MONSTERS at Twin Comics on Comixology! Currently, two issues are up, each introducing the good guys and the bad guys.

Here’s an exclusive preview of some of Bobby’s work into the next issue of GOBLIN HOOD! Keep up with him on Facebook, Twitter and Instagram for updates and more, such as teaser comics and background material. You can also check out his site, Twin Comics. 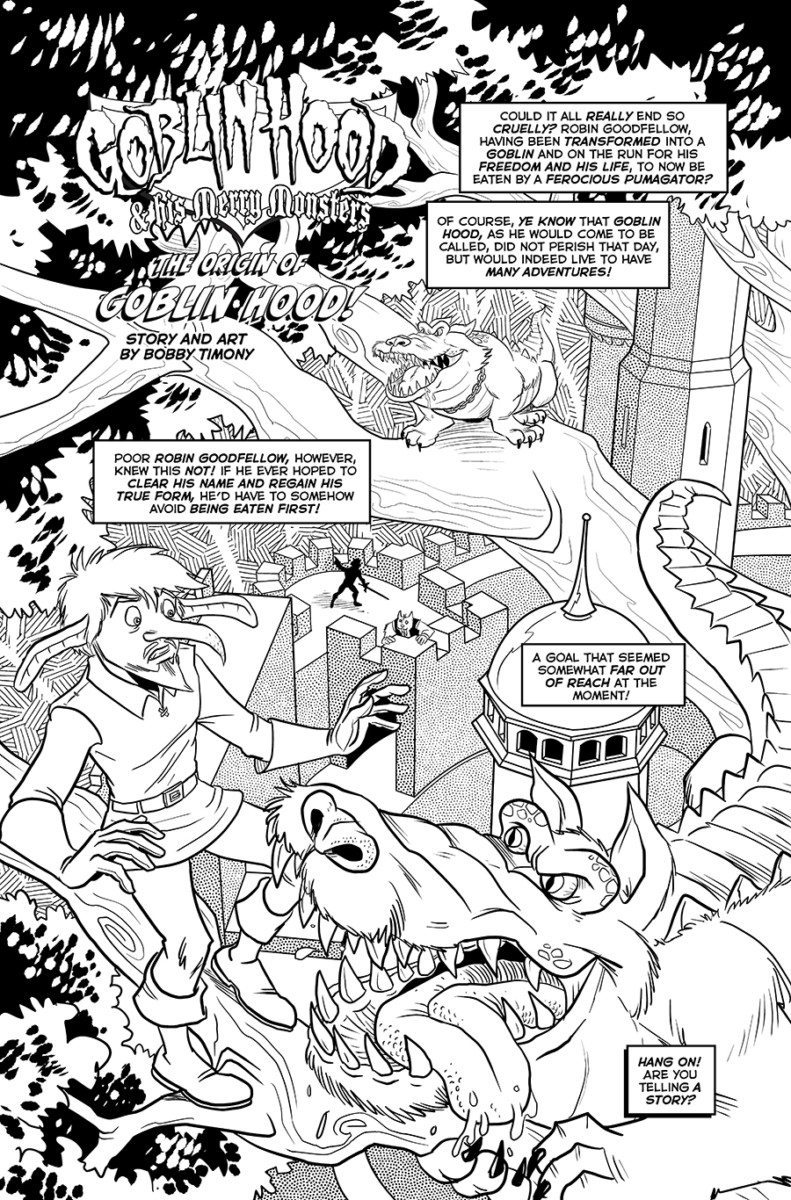 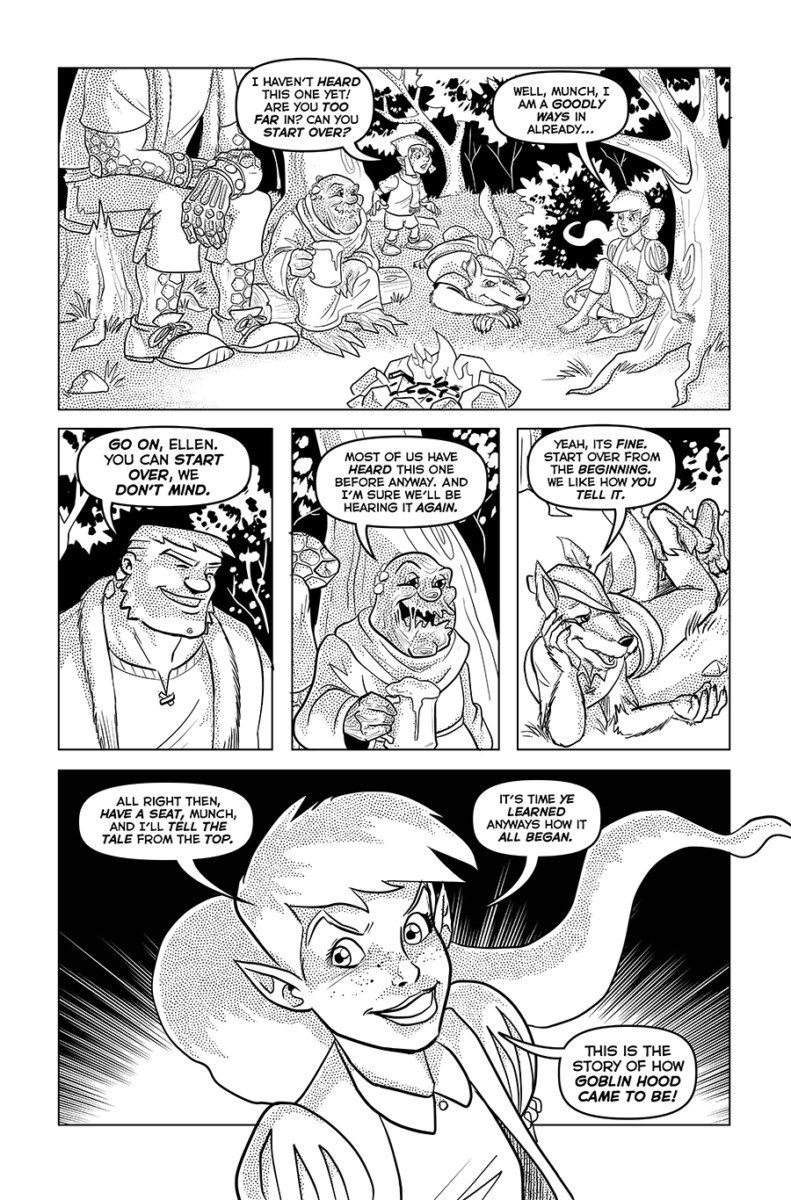