Brooklyn filmmaker Ace Salisbury is the creator of EVERYTHING’S OK, a new sci-fi web series about the apocalypse that is partially animated. DecayMag called the series “a rave of indestructible imagination and creativity.” Previous episodes have debuted on Paste Magazine and AV Club, and the series can be found on Vimeo. I sat down with Salisbury to discuss his ramshackle animated creation. 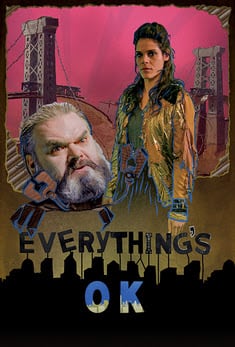 ComicsVerse: EVERYTHING’S OK is a very bizarre creation you’ve put together. How would you describe it to someone who’s never seen anything like it before?

Ace Salisbury: I would describe it as a sort of art school collage take on a dystopian future, [where] one of the main characters is the revived head of Orson Welles.

CV: Yeah, that sounds pretty accurate. I watched the series and it was really great. You shot the whole thing in your living room right?

CV: How exactly did you do that? What was that production process like?

AS: I have a 9 x 20 foot green screen, and I had two light stands and a crossbar to connect the two of them […] I draped the green screen down so that about 10 feet of it went from the ceiling to the floor and then another 10 feet rolled out onto the carpet beneath it. And so what we got was this kind of indie cyclo-rama […] where it’s just seamless green screen where you can get somebody shot head to toe. Completely immersed in the green.

So we can fit about two characters [on the green screen] at once in that living room. We had a radiator that wouldn’t turn off, [so] we just put as many blankets as we could on top of it […] to keep the sound from getting into our audio track. We about like eight people in that tiny room at once. We had an intern who kept creaking the floorboards because it was this old Brooklyn brownstone that had old hardwood floors and everything. It was just a hilarious kind of clown car of a tiny shooting space.

CV: There’s a very prominent do-it-yourself aesthetic to the whole production. What was your favorite part of making the series that way?

AS: The team that I put together to work on it was a combination of really good friends and people […] who I admired and just reached out to on Twitter. Like Josh Kornbluth who made one of my favorite films ever Haiku Tunnel. I just reached out to him on Twitter and he responded favorably, [so] I sent him a script and he said he was in and the next thing I know he was crashing on my couch for a week while we shot the show.

Same thing with musician Rob Crow who’s a legit famous rock star who I just reached out to. He liked the vibe of the show and made this incredible soundtrack for us. So I think it was the combination of working with people really close to me and also [people who] I really admired from the world. That was probably the best thing. As an artist, sometimes I feel a little too full of myself if I just reach out to people. But having a big project where it’s not just me […] it’s something I’m really passionate about, but there’s also some really cool people working on it with me, [so] I feel a little bit more empowered to say, “Hey this is a really cool thing come work on this with us.”

CV: What was the biggest challenge of making the series and how did you overcome it?

AS: Well there are a couple of challenges. The first was the budget. We had just enough money raised on Kickstarter, about $23,000. That left zero money for post-production. So I ended up being the one person doing all the editing, all the after effects, and all the animation. And everybody else basically took a break and waited for me to finish. And you know I had a few helpers here and there; I had somebody giving me animation assistance for free just out of the kindness of his heart […] Dylan Clancy, who is an even better animator than I am.

But it was just a really tough process to handle with so few people. It ended up taking a year to get all the post-production done on this. And all that could have been fixed with more budget. The other big problems that we [faced] was that the whole show started with a pilot that I, out of my own pocket, paid for. Two days of filming in a green screen studio, and, [on] our first day with [the entire] camera equipment team, we lost all the footage because the hard drive that we shot onto basically melted from overheating while we were pulling the footage off of it at the end of the day.

And so half of the whole pilot disappeared. We’d flown actors in from all around the US to get this done. Josh Kornbluth came from San Francisco and Michael Brown, who played Orsen Wells, was flown in from Arkansas, [so] we couldn’t afford to do that again […] the whole goal of the pilot was to create something we could pitch to people on Kickstarter. So we ended up spending the summer just calling in actors to come in and enact parts of the season as we envisioned them so we could make a trailer out of nothing. A total for-free, budget-less trailer. And it took a little while to make and it was kind of wonky, but it was good enough to get people excited on Kickstarter. But a bunch of times people kept hearing about all the mishaps with the show and wondering if we were just going to let it die, and we never let it die. I’m really happy about that.

CV: There’s a lot of weird elements in this show—but it also has a distinct humorous tone. Why use so much dark humor like with the body bags that say “Vacation Bags?” What inspired those choices?

AS: Well I’m a huge fan of really dark comedy. I don’t like anything being too dark, I like to temper dark tones with comedy but also at the same time I like things to feel dark. My favorite season of the Simpsons is season four when things got a little bit darker than usual. You’re going to family members’ funerals and just weird kind of dark stuff. Things feel more real. That’s just kind of who I am and what my sense of humor is.

The vacation bag in particular that you referenced was an actually a really tricky solution to how are we going to get it look like Josh Kornbluth was thrown into a tube by a robot. And we realized that the best way to do that was to have him put into a miniature bag which we could actually control in animation much more believably than […] josh with rag doll physics being thrown into a tube. Little things like that. For me, I wanted every fix of the world, ever dirty cheat we used to make it easier to shoot [to have] this kind of unmistakable tone of “things are awful so we’re putting this really excessively happy face on it just to make it palatable.” It’s kind of like candy coating the poison so you can make sure that people ingest it happily.

CV: What advice would you give to people just starting out in film making?

For me, I think that figuring out who your team is and figuring out how you guys work together early on is really important. The other thing is to specialize. If you can get really good at just one aspect of film making , it’s easier to support yourself. I would say my day job is after effects and editing and also directing sometimes. But I can do everything kind of, sort of well, but I can do a couple of things really well. In film […] it took me a while to realize people respect you a lot more if you’re really specialized. Figure out one skill you tolerate really well and do it over and over again and really develop it, and that’s an easy way of seeming more serious earlier on.

CV: Why do you think this project is important to see now? Why make this now?

AS:I think that people don’t think about the hard facts and the hard realities […] if we keep acting short-sightedly as a society, we are going to do irreparable damage to all sorts of things. I think we have been putting off long-term thinking for a very long time and it’s important to me to not just shy away from those uncomfortable ideas [but to also] explore them. But for me, exploring them through comedy and through bizarre situations is a lot more fun […] I feel like, especially with after the election, the way that show resonates changed completely. I could not have predicted this stuff [when] I wrote these things about two years ago. But right now, the show feels like it’s a lot less far in the future than it did when I was writing it under a liberal political agenda in the white house.

CV: What’s next for you?

AS: I’m currently working on a music video for a musician named Dougmore for his song ‘Rhodora.’ It’s with the same art director as EVERYTHING’S OK, and it’s purely animated, no live-action. It’s all cardboard cutouts. It’ll be released sometime after April 15th, that’s our deadline. It’s a ton of work but this a gorgeous project. It’s [a] kind of a spiritual successor to EVERYTHING’S OK in terms of the artistic style, but it’s much more beautiful. It’s about the Greek myth of Artemis. And it’s unmistakable. My art director [is] Christopher O’Connell [and] his art is unmistakable [and this music video] is a really gorgeous showcasing of it.

This interview has been edited and condensed for clarity.