Created by Madeleine Flores and published by BOOM! Box, HELP US! GREAT WARRIOR is based on Flores’ popular web comic. In it, the High Chancellor, Hadiyah, calls on the Great Warrior to close the portal that has opened to “the Demonside.” The Great Warrior reluctantly agrees, bringing her hero friend Leo along with her to vanquish the evil that has suddenly manifested in their world. HELP US! GREAT WARRIOR not only features strong female characters, but also demonstrates the influence of intersectional feminism through Flores’ inclusion of Muslim and transgender characters.

The term “intersectionality” was initially coined by Kimberlé Crenshaw to describe how gender and race intersect to shape the way women of color experience oppression. Since then, this concept has expanded to include all aspects of a person’s identity, such as age, sexuality, class, ability, ethnicity, and gender identity. Intersectional feminism is important because it recognizes that the experiences of women are not monolithic, and that women experience oppression to different degrees based on their various identities. By becoming intersectional, the scope of feminism widens from ending the sexist oppression of women to ending the oppression of all people.

READ: ComicsVerse ranked the 7 best feminist comics of 2016! Which ones have you read?

Although HELP US! GREAT WARRIOR is strongly influenced by feminist ideology, it is far from a manifesto. With a tone very similar to ADVENTURE TIME, HELP US! GREAT WARRIOR takes place in a fantasy world populated by primarily friendly and colorful characters. Furthermore, the titular Great Warrior is not a particularly serious character: she is a green blob with a pink bow. We don’t know anything about her identity other than that she’s a female character. 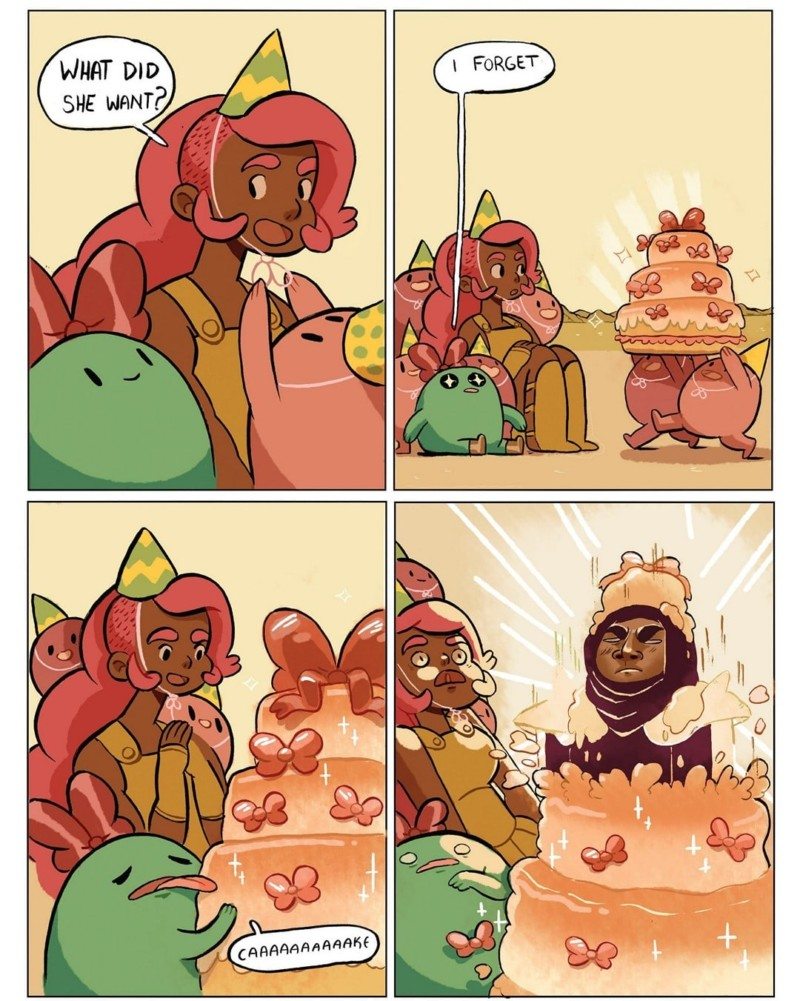 The Great Warrior’s amorphous nature makes her easily relatable to all women while also parodying and challenging female stereotypes. Through her simplistic rendering, the Great Warrior represents the complexity of identity in general. She proves that being kind doesn’t mean that you can’t be strong, and being a tad bit lazy doesn’t mean you can’t be brave. The Great Warrior complains about forgetting to put on deodorant while she carries a heart shaped shield and a sword with a bunny on the hilt. In a world where women are not confined by gender roles, women can conform to and defy stereotypical female behavior as they see fit. Women can be fierce and noble, but also concerned about how they smell.

Although the Great Warrior can represent all women due to her non-specificity, she can only represent an extremely lighthearted take on what it’s like to be feminine. This particular gender-centric type of feminism has become known as “White Feminism.” Although “white feminists” are well-meaning, they generally lack an understanding of the very serious problems faced by women who are not white, cisgender, straight, economically stable, and able-bodied. The problems faced specifically by women of color, queer women, and other female minorities are not considered “feminist” problems, since they do not afflict all women.

For example, one of the most misunderstood and misrepresented groups of women in western societies are Muslim women. Many westerners, including some who claim to be feminists, cannot overcome the perception that a head covering must be a sign of oppression, rather than a sign of religious freedom and self-expression. Furthermore, Muslim women are often characterized as quiet and submissive.

Unlike the Great Warrior, Hadiyah, the High Chancellor, represents this very specific group of women. She wears an all-black paint suit with long-sleeves, and a black headscarf. Additionally, “Hadiyah” is an Urdu name meaning “guide to righteousness.” Although it’s not clear if Islam exists in the fantasy world of HELP US! GREAT WARRIOR, it’s safe to say that Hadiyah is a subtle representation of a hijab-wearing woman of middle eastern descent. Hadiyah shatters all of the stereotypes faced by Muslim women. She’s not only the most authoritative character in HELP US! GREAT WARRIOR, but also funny and compassionate. Like the broader example of the Great Warrior, Hadiyah’s characterization challenges the stereotypes faced by the specific subset of women she embodies. 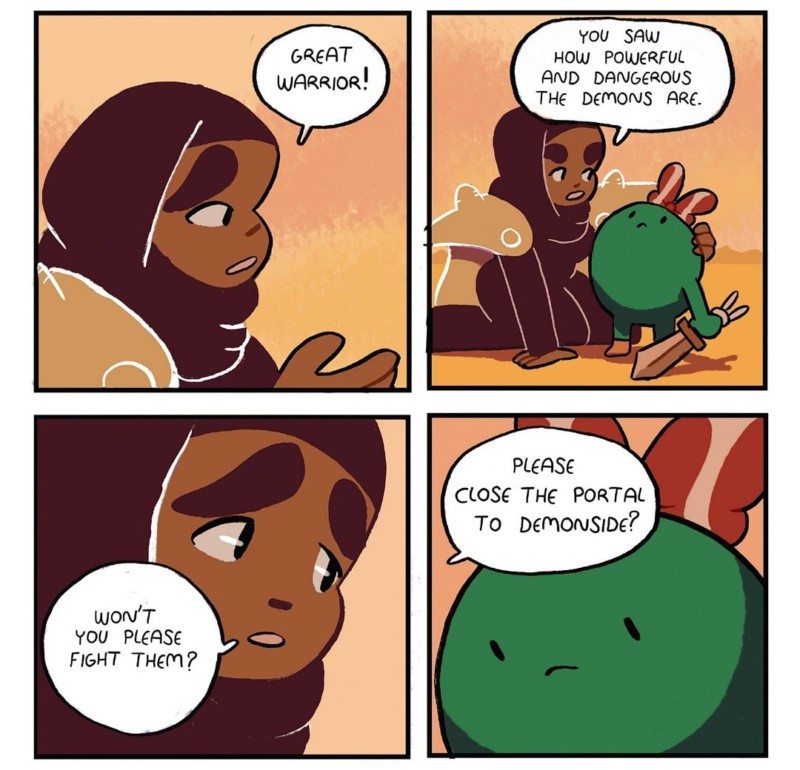 Another prominent character in HELP US! GREAT WARRIOR is the Great Warrior’s friend, Leo. In issue #1, when Hadiyah cannot find Leo’s name in the “scroll of heroes,” Leo explains that she used to go by the name Samson. Hadiyah doesn’t make a big deal out of this, and quickly changes Leo’s name in the scroll. Although Flores’ does not make Leo’s identity glaringly obvious, she is a transgender woman. Like Hadiyah, Leo represents an oft misrepresented group of women.

Although it’s done casually, the reader can tell by Leo’s reaction that it’s a big deal when Hadiyah changes Leo’s name in the scroll. Hadiyah is not simply tolerating Leo, but is choosing to take an active role in affirming Leo’s identity as a woman. Although Hadiyah may never understand what it’s like to be transgender, she recognizes the legitimacy of Leo’s identity and Leo’s right to make decisions for herself. Hadiyah realizes that she can tangibly help Leo by changing her name and does so without Leo even asking. She also realizes that by helping Leo, she is gaining another ally in the fight against evil. This is exactly what intersectional feminism looks like. 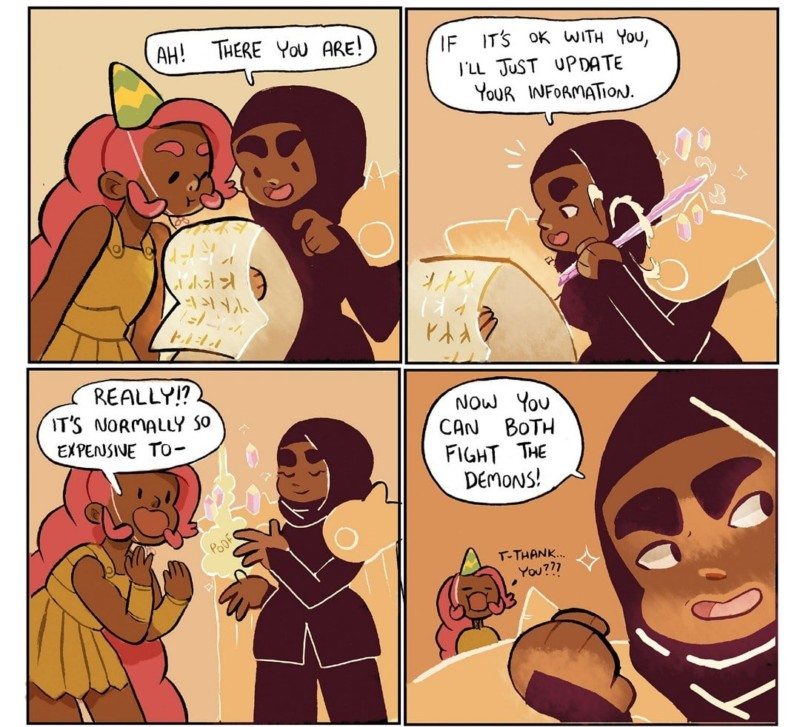 Flores’ decision to represent two different minority groups allows HELP US! GREAT WARRIOR to avoid the pitfalls of “White Feminism.” However, her decision to include both a queer woman and a Muslim woman is particularly meaningful. Political rhetoric often pits Muslim people and LGBTQ people in general against one another. Queer people are told that they should join in on the rampant Islamophobia because if an extremist group was in charge, all LGBTQ people would be executed. Despite the fear-mongering that attempts to divide these two groups, Muslim women and transgender women actually have quite a lot in common when it comes to the way they experience sexism.

Where Muslim women have come to represent the far right, transgender women represent the far left and “perverse” liberalism. This is similar in a lot of ways to the “virgin-whore dichotomy.” Society pressures women to strike an unachievable balance between conservatism and liberalism: they don’t want to be a prude but they don’t want to be a slut either. Although they represent opposite ends of a spectrum, neither Muslim nor transgender women satisfy society’s concept of what the ideal woman should be like.

READ: Are you a BOOM! Studios fan? ComicsVerse picked the best BOOM! comics of 2016!

Muslim women and transgender women are not the only groups of women that violate gendered expectations. However, both groups are highly visible. Not all Muslim women wear coverings, but those who do are immediately recognizable as Muslim. Similarly, there are many transgender women who pass as cisgender, but there are also transgender women who either can’t or don’t want to pass as cisgender. By both defying gendered expectations and indicating their identities in highly visible ways, these two groups of women are the targets of not only verbal attacks, but sometimes physical attacks as well. Through its inclusion of two groups of women that have very specific and sometimes difficult experiences with gender, HELP US! GREAT WARRIOR transforms from a feminist comic into an intersectional feminist comic. Ultimately, the “girl power” message of Flores’ work is all the more powerful because of her dedication to diversity.

Despite its lighthearted tone, HELP US! GREAT WARRIOR demonstrates the real need for unity among all women. Because they struggle against sexism of all types, all women can be part of a sisterhood dedicated to breaking down the toxic norms and institutions that perpetuate oppression. Like the Great Warrior, Hadiyah, and Leo band together to encourage each other and vanquish evil, real women can fight sexism by lifting each other up and embracing their differences.