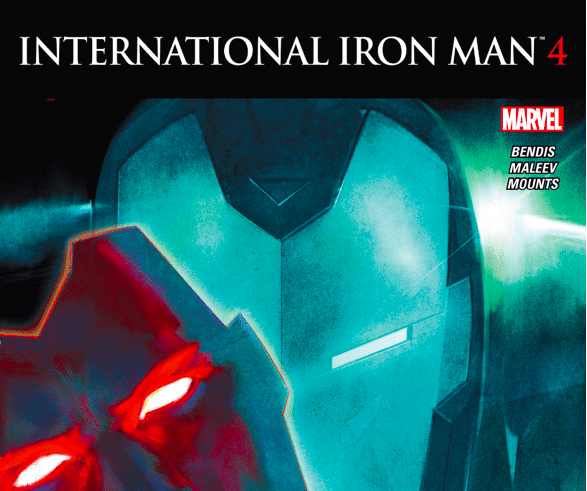 The latest issue of INTERNATIONAL IRON MAN is like a roller coaster without “the big drop” or a fast car ride without a destination, but mechanically, it’s sound. It’s wonderful to look at with fantastic characters and dialogue that build toward a climax that sadly never occurs.

READ: our review of the previous issue of INTERNATIONAL IRON MAN!

Issue four finds Tony yet again on the quest to find his biological parents. Tony finds and researches the adoption agency that once gave him up to no avail. In the present, Tony and Cassandra make no progress on their current battle of wits. Cassandra doesn’t know what to do with Tony in her possession, and Tony can’t get her to crack about what she knows about his parents. Meanwhile, they manage to have a nice discussion that reflects the most current flashback into their tortured history.

The issue reads like a well-oiled machine. The three different stories are laid out one at a time, and all told extremely well. This is a monument to Bendis’ strength with dialogue and character. The scenes with Tony, FRIDAY, an old lady, and his ex-girlfriend are all extremely fun to read. The nuances of Tony are present, giving him more emotion than he’s had probably since Matt Fraction’s run on the character. It is wonderful to see a vulnerable and somewhat desperate Tony, especially when he’s talking to a character as cool and intriguing as Cassandra. She seems to be a true match for Tony in almost every way since she is one of the few people who really knows the true Tony Stark. It’s a great joy to see them interact.

The main story of this comic makes almost no progress, unfortunately. This problem has been evident since the first issue. We’re hardly closer to learning Tony’s true heritage and, at this pace, we never will. There are no new revelations in the flashbacks and no crazy character moments aside from Cassandra’s possible ties to HYRDA. It’s interesting that the book is such a joy to read but leaves a great feeling of emptiness in terms of its main plot. It’s like eating a really good sandwich that doesn’t quite fill you up all the way, and you know you need another. It’s well made, but there’s not enough of it to take you all the way to satisfaction.

Additionally, Alex Maleev continues to do some stellar work with these characters. His distinction between settings adds a lot of depth to the book. Each little story feels vastly different from the rest, and his dark lines work really express Tony’s pain, even if he does look a little strange in flashbacks.

LISTEN: to our discussion of one of the biggest comics ever, CIVIL WAR!

The greatest part of this comic is the incredible work by colorist Paul Mounts. While Maleev attempted to differentiate each story through his pencils, Mounts takes it up a notch with his colors. This is extremely evident when Tony and Cassandra are talking. The use of red, yellow and orange seem to represent Iron Man himself, bringing tons of personality to the pages. It is hard to look away from, and it’s a wonder that color representation isn’t used as often as it is in this book. The colors evoke a sense of astonishment, as if Iron Man himself did it, from the beautiful sunset to Tony’s dreamy green eyes.

INTERNATIONAL IRON MAN is a book that continues to work against itself. Its gorgeous art and excellent character work is held back by its slow-moving story. It’s been four issues, and it still feels like we have made little progress in the saga of Tony Stark’s true lineage. It reads great, but it needs to do a little more to take it to the next level.