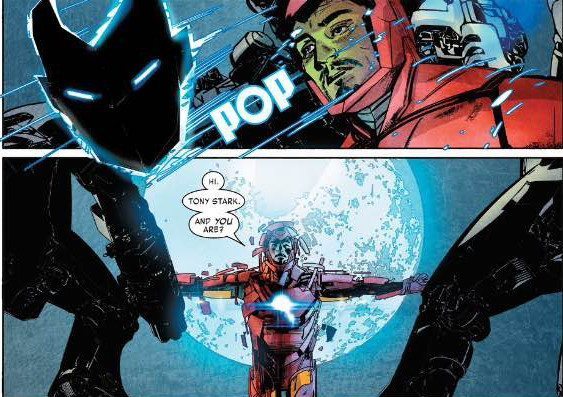 Here’s the thing about INTERNATIONAL IRON MAN: when’s it’s good, it’s really good. Showcasing Tony’s younger love life and contrasting it with his current situation is highly entertaining and a great way to build on the mythos. However, when it goes wrong, it goes pretty wrong. Unfortunately, this issue is a little bit of both.

Issue 3 continues along the snail-pace that the first two laid out for it. Tony is still under attack and looking for his birth father. As this goes on, the issue flashes back to his early and more angsty days while he fights with his father and falls head-over-heels for Cassandra Gillespie.

As said before, the issue works really well in parts. Tony’s relationship with Cassandra is highly entertaining and Brian Michael Bendis does a fantastic job of setting up their relationship. Their dynamic is unlike any Tony has ever had, as she is an equal to him in a lot of ways. Young Tony is one of the best Tonys, and Bendis uses that to his advantage. The mythos-building the issue does succeeds in doing so without stepping on many toes, which is refreshing to see in an Iron Man book in 2016. The new technologies presented are a lot of fun, including an invisible suit of armor Tony now sports. The parallel between this suit and his prototype in the past is clever, and probably the coolest thing the issue has to offer.

Are you team Iron Man? Check out our full review of CAPTAIN AMERICA: CIVIL WAR!

However, it does step on one giant toe, and that is the book’s greatest weakness: why should we care who Tony’s birth father is? Why was it necessary to undermine and change so much of that backstory in the first place? While it remains to be seen if this fact is true or some sort of gimmick by his adversaries to make him believe he really isn’t a Stark, it just feels unnecessary at this point. This issue reads well and is pretty entertaining, save for some awkward encounters with guards in super-powered armor. However, every smile it produces is dashed away thanks to the reminder of this book’s purpose: to erase some of the greatest parts of the Iron Man canon.

Bendis has always had a knack for character, and this book nails it. The dynamics are great, most of the dialogue is on point and it’s a fun read. Why add in plot points that don’t feel necessary and, more than anything, feel like a gimmick to slap on a cover to get people to buy the book? A series centering on a young Tony Stark and falling in love with someone who would eventually try to kill him is an extremely enticing premise, but is sadly squandered by other goals the series seems to have. 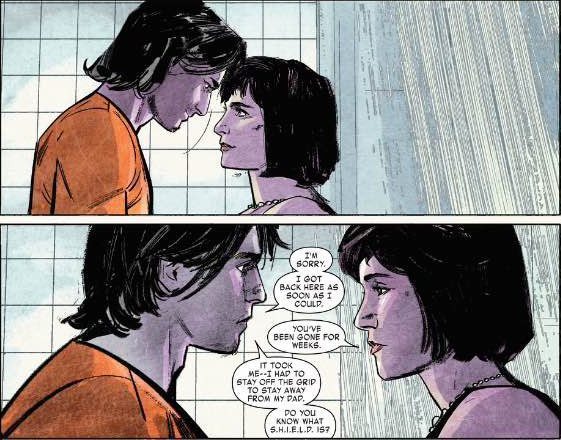 While the story may have its faults, the artwork by Alex Maleev and colorist Paul Mounts is solid as ever. The colors change with the times and the dark lines Maleev produces are a refreshing change of pace from the polished and metallic ways in which Iron Man is usually drawn. There is little done outside of actions and characters in panels, but the simplicity of the style grounds the book in a realism that is more than welcome in a book about men flying around in iron suits.

Overall, INTERNATIONAL IRON MAN 3 is its own worst enemy. It wants desperately to be about Tony’s lineage, so much that it sacrifices what makes it great. Hopefully the book wraps up this short stint soon, and it’s quite possible judging by the cliffhanger on the final page. While the characters and art are strong, and the book is a very entertaining read, the comic needs to sort out its few story problems if it wants to become a worthy entry into the Iron Man mythology.