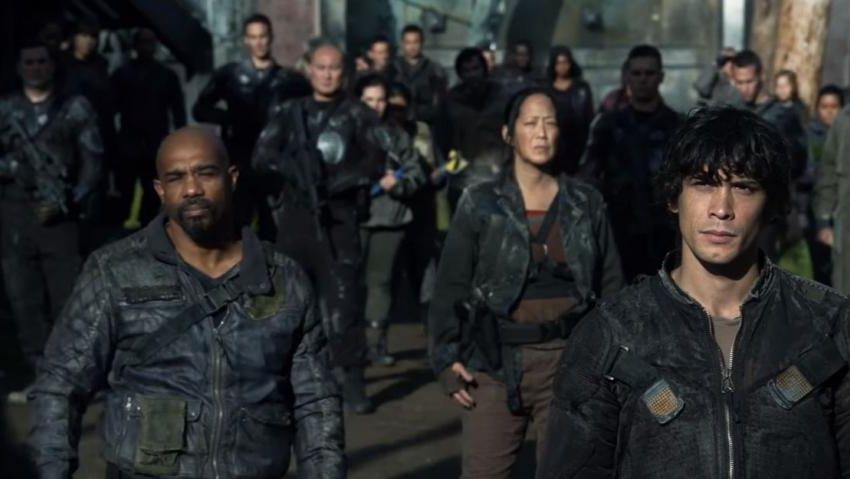 As a queer white woman watching THE 100, I initially didn’t catch onto a lot of the racism that underlies the structures of the show. What I took for meaningful deaths were really for shock value and what I took for well-thought out arcs were props to hold up the white characters of the show.

Don’t get me wrong—I love THE 100. I think as a science fiction story, it has grown and excelled beyond any of our wildest imaginations. From campy teen dystopia to a show that tackles the grey areas of war and politics with a bunch of women in charge and queer characters, THE 100 has been surprising with how well it’s developed. THE 100 often gets praised for is its diverse cast and the sheer amount of women in various roles. For white feminists who are fans of science fiction such as myself, the show seems like it’s a dream: a diverse youth cast telling compelling stories in an original dystopic world! What could be better?

As it turns out, quite a few things.

It’s incredibly important to remember and point out that science fiction has a long, long history of erasing people of color from its narratives. Did you know that one of the covers of Octavia Butler’s incredibly amazing DAWN (1987) was drawn with a white woman on the front even though the main character is a black woman because the artists just assumed every character in the book was white?

People of color were often written out of stories that imagined the future and stories that explored the past. White authors, intentionally or not, almost only wrote about white futures. Spaces where authors of color and other minority authors could write about their experiences and create worlds that not only included them, but were based around them and their unique experiences were and still are necessary. Genres like Afrofuturism, Black Science Fiction, Indigenous Science Fiction and Feminist Science Fiction developed in response to these needs.

READ: Check out Steven’s amazing piece on Afrofuturism and the Black Panther!

THE 100, unlike early science fiction stories and shows, has a fairly diverse cast. Bellamy Blake, secondary main character, is played by Bob Morley who is half-Filipino. Fan favorite Raven Reyes, played by Lindsay Morgan, is of Mexican and Irish descent. Christopher Larkin, who plays Monty Green, is an American actor born in South Korea. Major characters like Indra, Pike, Thelonious, and Lincoln are all African-American. The show is by far one of the most diverse on television—but that doesn’t mean it can’t be racist. This kind of racism is insidious rather than blatant.

The difference between insidious racism and a more blatant brand of racism is that insidious racism tends to be more subtle. The word insidious itself means, “proceeding in a gradual, subtle way, but with harmful effects.” Shows like HOW I MET YOUR MOTHER and GAME OF THRONES are obvious in their racism—one based in New York City with an entirely white cast and the other in a fantasy realm where dragons are more realistic than fleshed-out characters of color. THE 100 has an incredibly diverse cast with many of their characters of color being major characters. The stories these characters are given, however, often do not do the characters justice.

As a fan of anything, it’s important to know what’s problematic with what you love. As a white fan, it’s incredibly important to be aware of the racial dynamics (or lack thereof if the cast is all white, as it often is) of a show. As a white female fan, it’s difficult not to get swept away in how awesome all the ladies of the show are and get solely focused on that—that’s exactly what I did at first.  Alas, let’s not focus on what the show does great and tune in on where it’s gone wrong.

LOOK: Watch PREACHER and OUTCAST? Read this article on religious cynicism in both shows!

Lookin’ at you, John Murphy.  And Jasper Jordan. And Finn Collins. 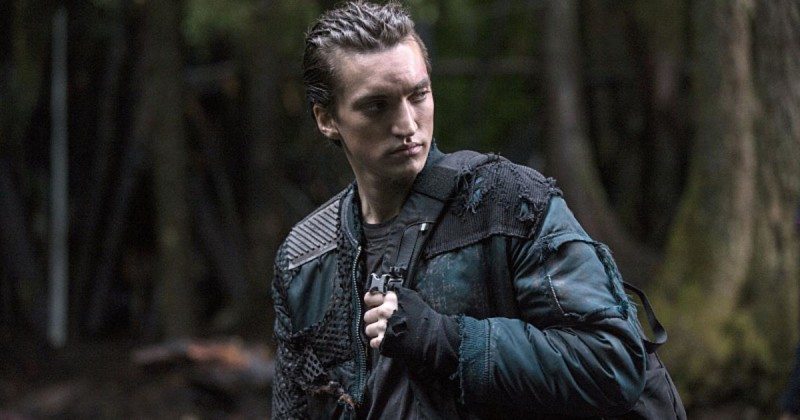 Does anyone else remember when John Murphy shot Raven Reyes and caused her permanent physical damage? It’s difficult to remember Murphy as anything but the sarcastic and neutral-looking character THE 100 has been painting him as in season 3. While having a character with a physical disability has really set the show apart, it’s alarming how quickly the writers wanted us to forget that John Murphy was a villain. He’s been a charming anti-hero of sorts since he left with Thelonious to find the City of Light. Although he’s more opposed to violence than he used to be, it doesn’t change the fact that Murphy got to walk free and become a new man after causing Raven a near-fatal injury. Hell, even I forgot he did that. 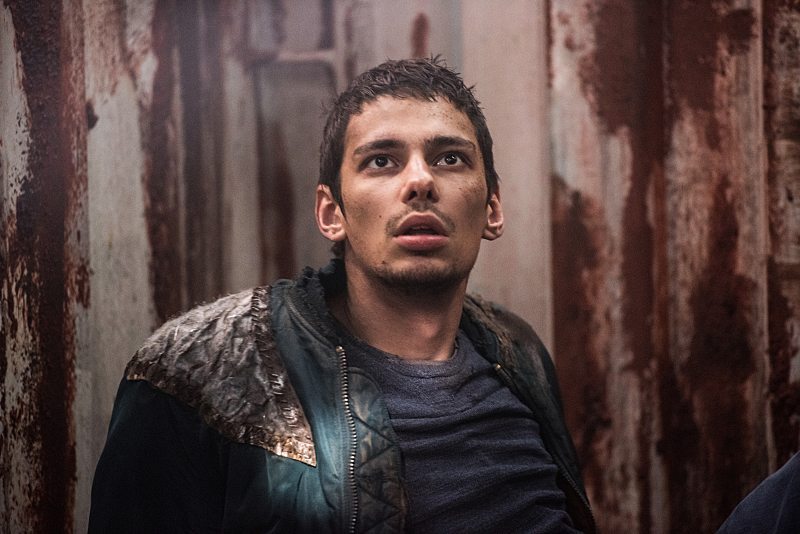 After Jasper’s beau Maya died on Mouth Weather, he became an alcoholic who constantly screwed stuff up for the rest of the crew. He became a danger who was always drunk and due to his new-found apathy, helped ignite a war in the beginning of season 3. He was awful to everyone—especially to his best friend, Monty Green, one of the few Asian leads on the show.  Throughout the entire series, Monty has undoubtedly been sidelined for the sake of Jasper’s development. It wasn’t until season three that Monty actually got a plot (which ended traumatically) and then went back to saving Jasper’s ass all the time.

Jasper is, of course, forgiven at the end of his alcoholic/City-of-Light-drug-using arc for the destruction he caused while grieving. Though it’s understandable for Jasper to be devastated by his loss, he is allowed much longer to work through it than any other character. Forget that Monty had to murder his mother then face his guilt and move on all within a single episode… 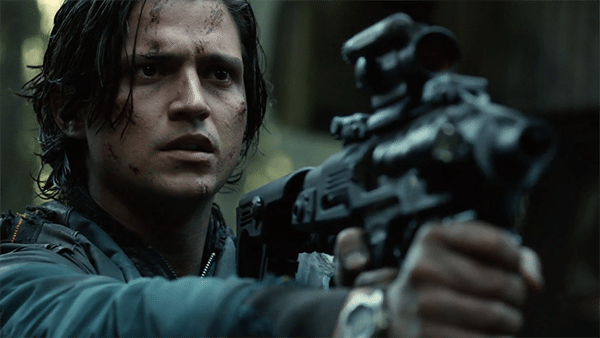 Oh, Finn. One of the worst things THE 100 has ever done was redeem Finn from massacring an entire village. In an attempt to show the effects of war on the psyche, the writers allowed a white male to murder an entire village of peaceful people and forgive him for it. The writing was lazy for this attempted arc. There was no indication Finn was losing himself until he decided to round an entire village of innocent people, hold them in pens like animals, and slaughter them. The show’s metaphor for colonization/genocide of Native peoples by Europeans couldn’t have been any clearer than here. That’s what makes it so unforgivable: the clear parallel followed by ultimate forgiveness. Even though Finn is met by death for his actions, his peers understand why he did what he did. Unlike those he massacred, he is given a painless death at the hands of the one he loves—not by an enraged man with a gun.

CLICK: If you’re unsure if you want to see the GHOSTBUSTERS, read the movie review here!

People of Color in Positions of Power 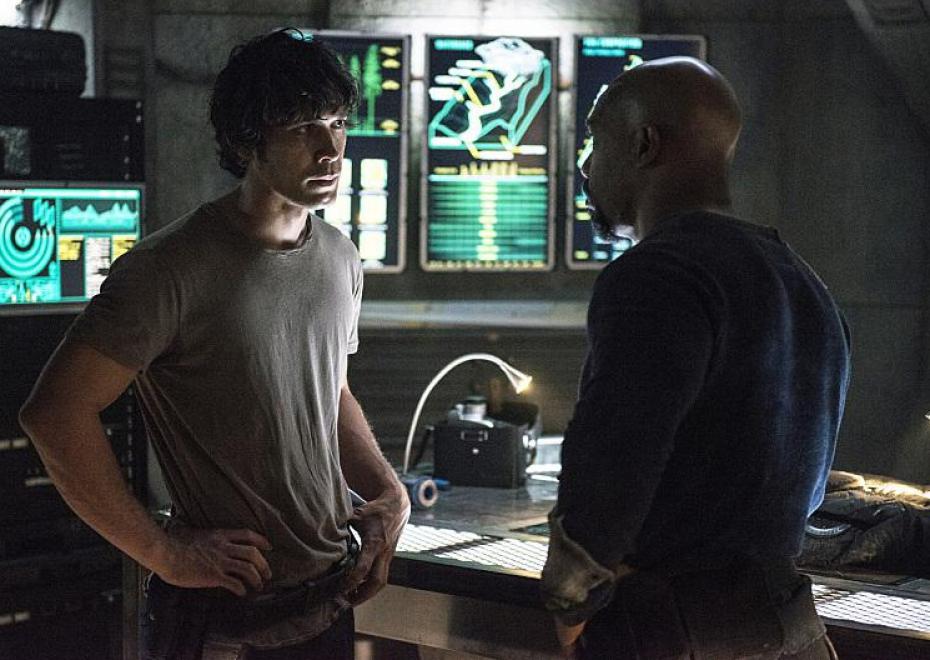 I’m putting these two together because they came into power around the same time. Bellamy follows in Finn’s footsteps and has an incredibly out of character and senseless brain shift and decides to follow dictator Pike, who decides that killing people who don’t agree with him totally makes sense. Did I mention that Pike is a black man? Does that matter? Can’t people of color be villains too? Of course they can! What makes Pike being in power an instance of racism is that unlike the redemptions offered to the white murderers above (Finn and John), Pike gets a single episode of back-story after we all hate him. It was far too late to make him a sympathetic character, which he easily could have been had they told his story before he started executing and banishing people that disagreed with him. After we finally get a look into why Pike is Pike, Octavia murders him. This was awesome because RIP Lincoln (and good luck on AMERICAN GODS!), but less awesome because Pike never stood a chance at redemption, something that is handed out like candy to white characters. 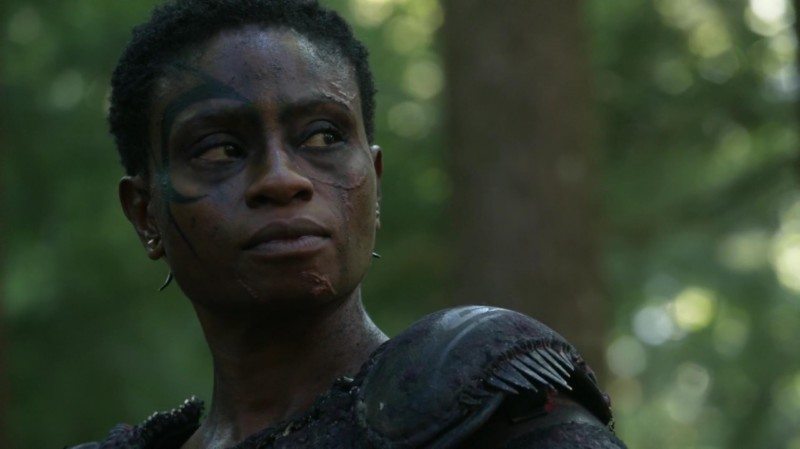 Indra, Indra, Indra—always kicking ass, and never getting a moment to shine. Or a plot of any kind. Or a back-story. When her army that was sent to protect Pike and his crew got slaughtered by Pike and Bellamy, she had to shut up and deal with it. She is constantly written as second to the white characters  she is surrounded by. Literally second to Lexa in terms of Grounder hierarchy, and second to the development of Octavia Blake, kickass woman who unfortunately tends to play more of a white savior role than anything else. It’s beyond unfair that Indra has never gotten a plot beyond furthering those of the white characters around her. Her character has an incredible amount of potential to be explored, but has been sidelined to prop up white characters Lexa and Octavia Blake. 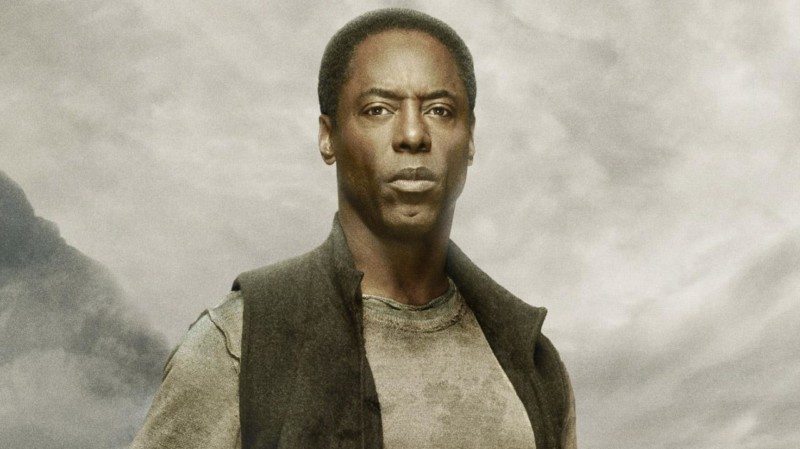 I don’t have any problems with the entirety of Thelonious’s plots—he gets a hefty amount of them, from Chancellor to the City of Light/A.L.I.E’s right-hand man. His character is explored well, he’s given plenty of screen time, and his plots are not shared. Promised the gift of no pain and free from grief over the loss of his son, Wells, Thelonious becomes a religious leader— and nearly leads a majority of the population on Earth to destruction. On its own, the plot is extraordinary. However, paired with the trend of having people of color in power fail across three seasons (there are many that I did not mention due to the fact that I’m actually not writing a book), it looks like insidious racism striking again. Subtly, the show is taking all of its characters of color down a notch, setting them up for failure before they even have a chance to try.

READ: If you are playing POKEMON GO, you have to read Sabrina’s article on Nintendo and POKEMON!

I’ve barely dug into the problems that litter THE 100 concerning race and representation. This article isn’t bashing THE 100; it’s always going to be one of my favorite shows and I think that overall, it’s a pretty amazing show. But as a fan, I cannot stress enough how important it is to be aware of what is problematic with what you love (and yes, everything has problems.) Yes, it is exhausting and frustrating. Yes, it is necessary. No, there’s nothing radical about pointing out racism in a television show.

Being aware that diversity does not equal a lack of racism and calling it out is one of the ways we, as fans, can help writers become better. As a white fan, I listen to fans of color and what they have to say about it because that’s part of what being an ally is all about. To my fellow white fans, you should do the same. I see most of us ignoring the issues of racism I barely touched on. You should be critical of what you love most so that it can be the best version of itself, so that everyone can enjoy and feel like they can belong to the fandom. THE 100 can and should treat its characters of color leagues better than they do. Let’s hope that along with season 4, a change of pace comes, too.