London 1894. As a new century approaches, change is in the air for Lady Bertram. Trapped in a marriage of (in)convenience, she finds solace in the arms of her maid, Mariah. It’s clear that Lady Bertram’s husband beats the household staff and goes out for nocturnal dalliances of his own. Lady Bertram cannot conceive a child for him, leading to more unhappiness. But Mariah has secrets of her own, supernatural ways in which she and Lady can have a family and wreak a terrible revenge on their enemies.

INSEXTS is a no holds-barred body horror and sex fantasy in Victorian London. It’s also a deeply moving love story between two women who are torn between what they want and who they are. Marguerite Bennett does what she does best, constructing a solid, entertaining narrative with strong female protagonists at its center. While I have loved her work on DC COMICS’ BOMBSHELLS, ANGELA QUEEN OF HEL, and A-FORCE, in INSEXTS it reads like she is unleashed, not held back by the restrictive nature of the Big Two. She spins a tale that is at times wholly horrific and erotic, draped in a gorgeous Gothic setting. Her use of language feeling both modern and yet of that time. Lady Bertram and Mariah are exceptionally well-rounded creations, aware of the cruelty of man, but also able to find the beauty of the world. They are creatures of justice and vengeance, fearless in their love for each other. Over the course of seven issues, they struggle with the supernatural powers they have received, while also discovering there are worse monsters out there, some human, some other.

As Bennett mounts on the horror, Ariela Kristantina goes right for the jugular with her art. Visually, the book is not for the faint of heart, the female leads transformations terrifying as their limbs are rent and torn apart. There is one particularly haunting sequence which features Lady Bertram going to a back-alley doctor which ends in him being consumed by her genitalia. Her love scenes are graphic but also full of delicacy. Yet Kristantina is not all eroticism and horror. She constructs a London that is full of decay, with dark alleyways and all manner of people struggling to survive. It all feels real with a tinge of the otherworldly slowly creeping in to consume all. Bryan Valenza’s colors fit Kristantina’s inks with industrial browns, blood reds and supernatural greens. This book almost drowns in how much blood is shed, splashes of it jumping out at the reader at every twist in the script. 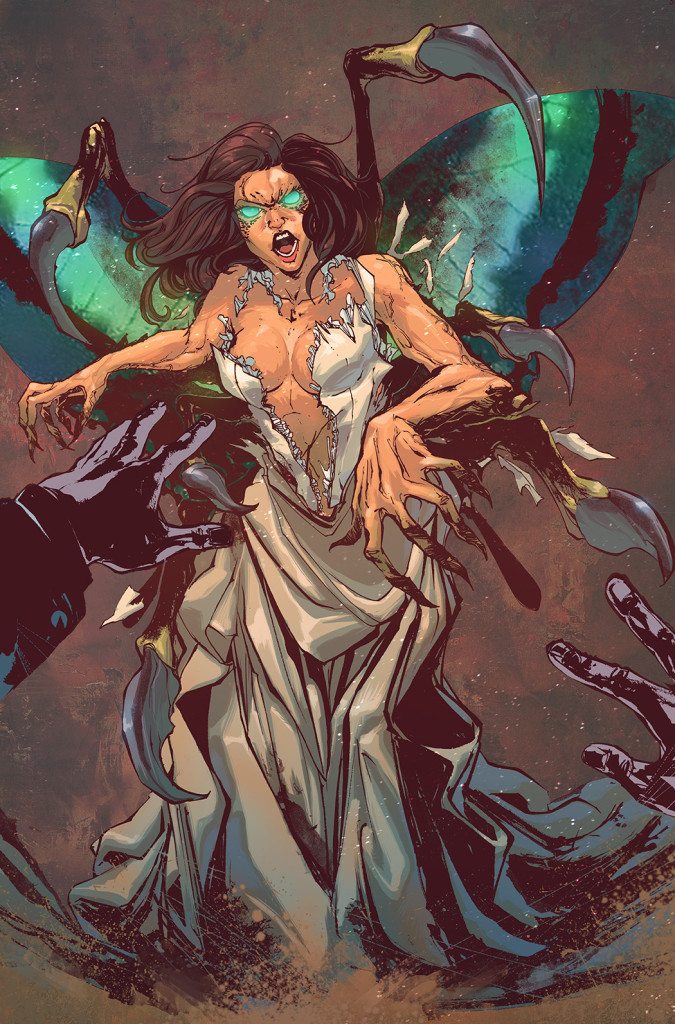 The only issue that I would have with the book (apart from advising not reading it in a family setting) is with some of lettering. Overall it is strong and well placed, adding a style that lends itself to the time period. But there were times where I found the reading of the dialogue confusing, the dialogue balloons not in sync with who was talking. This led me to read several panels a few times due to the confusion. These, however, were only moments in an otherwise tightly-plotted, scary romp through Victorian London.

As a whole INSEXTS is a powerful piece of comics entertainment. It never shies away from the horrors of life, the monsters are terrifying to behold, and there are genuine scares to be found throughout. If you like your horror steeped in blood and limbs, pick up the collection today.