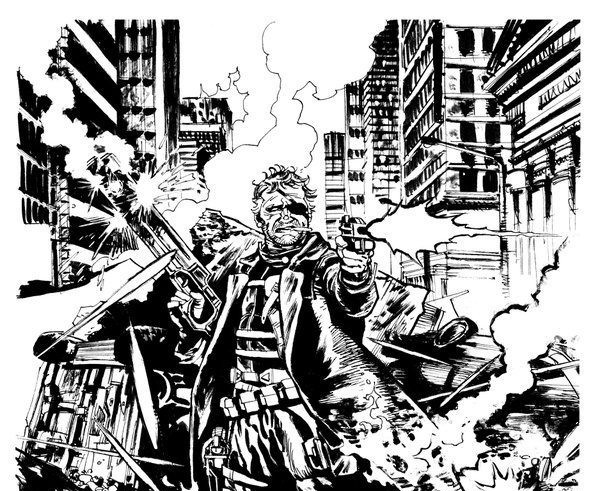 ComicsVerse is always dedicated to bring you insights from the best and brightest talents in the comic industry. At Wizard World Philadelphia, we were able to catch up with Matt Triano, the artist of DEVILERS. He has also worked on characters like Sherlock Holmes. His style is immediately attractive to the eye, a chaotic neatness that draws you in. ComicsVerse reporter Travis Czap couldn’t help but stop for a quick interview in artist alley.

ComicsVerse: You have penciled and inked books about Sherlock Holmes and the Lone Ranger; what are some of the challenges and benefits of working on these well-known characters?

Matt Triano: Sherlock and the Lone Ranger are both 19th Century characters; their worlds are strange to us and often intricate. That was a challenge. One benefit is that more readers tend to buy books about characters they already know, so hopefully a few more readers enjoy the stories. 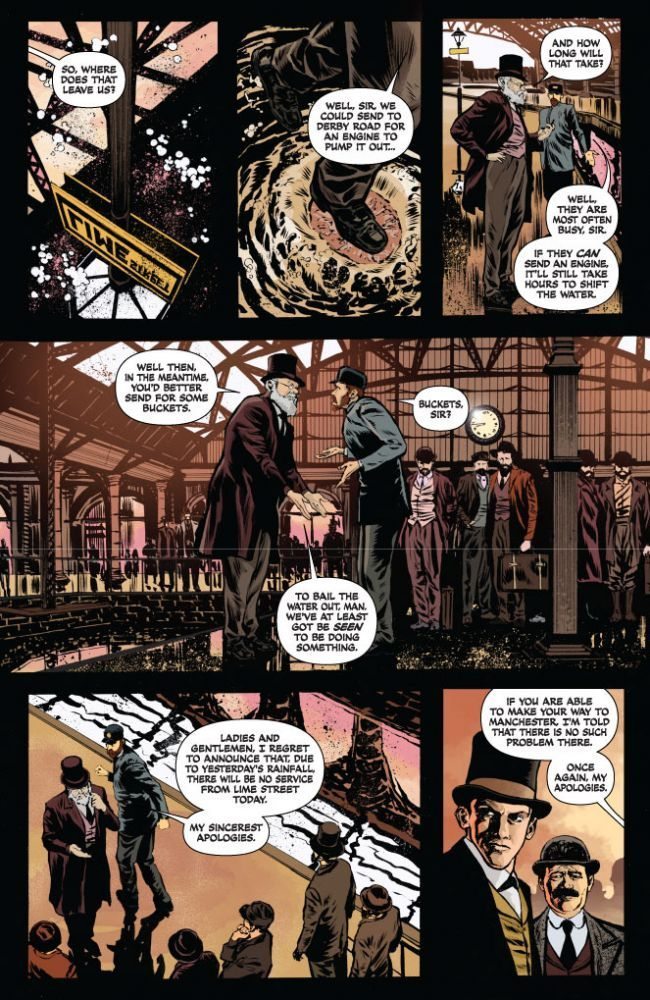 CV:  Do you prefer to work on these established characters or on new original characters?

MT: I honestly don’t have a strong preference at the moment; I’d like to do more of both. That’s a boring answer, maybe, but I haven’t done much big superhero stuff, nor experienced the great benefits that might come from drawing, say, Spider-Man. Which I wouldn’t mind BTW.

CV: You’ve also done work on storyboards. Of which project are you most proud?

MT: I’m working on a documentary about Medieval Spain right now that I’m excited to see come together. I tend to make boards for commercials or pitches that don’t end up being seen, which is usually for the best.

CV: How does storyboarding for a documentary compare to designing the layouts and art for comics?

MT: The boards for [the documentary] are not like normal storyboards, but are instead larger, layered illustrations which will be colored and animated in a limited capacity, then inserted into the film. At the moment I’m inking rough pencils of figures and environments, scanning those into Photoshop, and building the scene based on voice-over dialogue and production notes. Very little in this assignment has to do with comics except the media used: ink on paper. Traditional boards have a little more in common with comics.

CV: You have a unique artistic style, simultaneously reminiscent of disciplined Japanese woodblock prints and of Ralph Steadman’s wild inkblot style.  How did this style develop?

MT: Thanks very much. My style changes in reaction to the story and to my own whims. Sometimes I turn a corner as an artist, get better, and ditch old ways that no longer serve me. I change tools and paper, incorporate new influences. Most of this is in an effort to be a better inker—pencil is simpler. 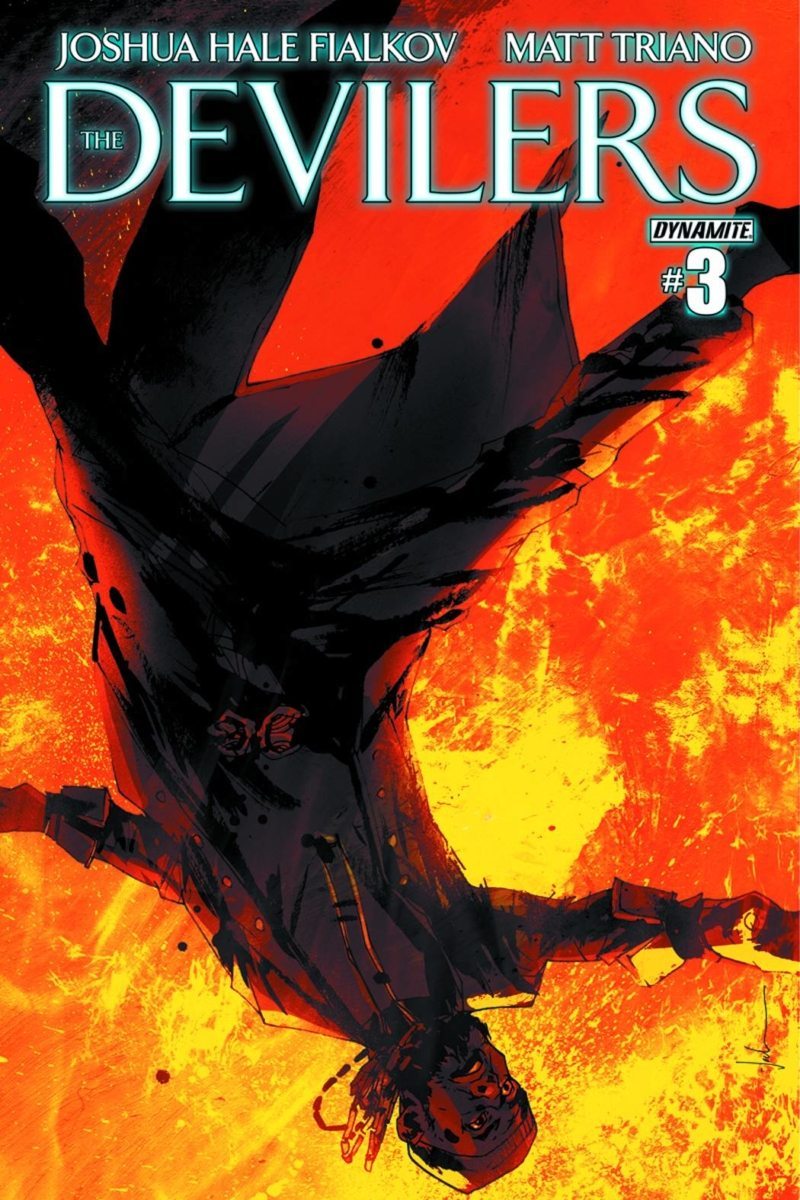 CV: How have you changed tools and paper to achieve these effects?

MT: Tonal variation in black ink on white paper is achieved through line, drybrush, china marker, screentones, fingerprints, spatter, and more. But watercolor paper reacts differently to a loaded brush than marker paper, bristol or vellum, and a nib can create a far wider range of line weights than a technical pen. I don’t do anything special to the tools nor paper itself, but mix and match to try the new thing.

CV: What is your personal goal as an artist, or what message do you want to give to your audience?

MT: Big question. I’d like to tell a number of stories working on established properties, and doing creator-owned books too. As writer and artist. I think a lot about odd fictions, forgotten history, time travel and super powers. The message will change. 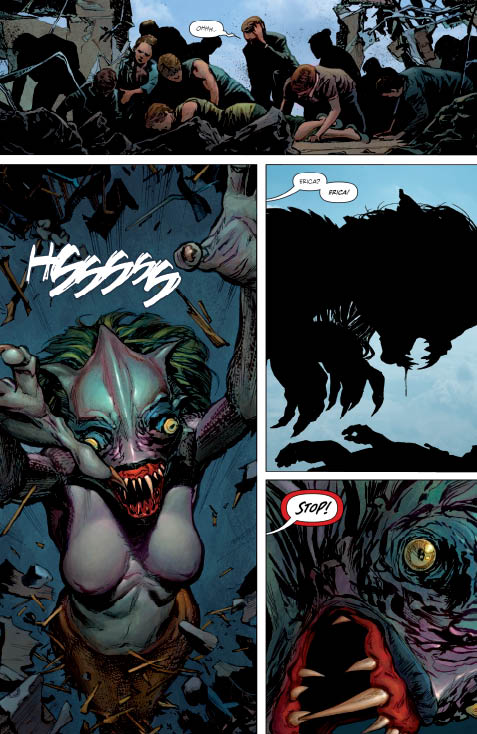 CV: Are there any specific projects that you want to tackle?

MT: I’m slowly inching forward on the plot of a thing that might turn into a book or a series in a few years; right now it’s called Rama. Maybe.  I’d like to write and draw Superman for a while. I like Daredevil and Captain America, too; I’d like to do something with them.

READ: For more from another great indie comic talent, check out this interview with Michael Moreci!

CV: What is the most valuable advice you’ve ever been given about comics?

MT: Set up elements visually before you incorporate them into the narrative in a meaningful way; keep majority of actions moving left to right and be careful of tangents; don’t crop hands, heads, nor anything that bends at the bendy part; use your gutters; don’t slant panel borders; draw feet. Use a lot of references. Draw from life. Don’t fall in love with anything you make. Most—if not all of that—comes directly from three teachers with whom I studied in undergrad at SVA and without whom I wouldn’t be in comics: Klaus Janson, Phil Jimenez and David Mazzucchelli.

CV: Wow, you were learning from some real legends there! What was that like? Any fond memories?

For more from Matt Triano, check out his DeviantArt Page and pick up DEVILERS from Dynamite!