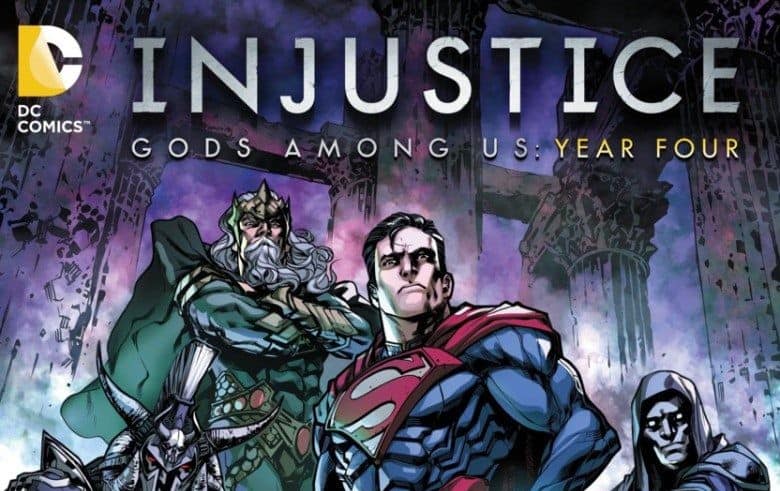 Things Keep Happening in INJUSTICE: GODS AMONG US!!!

What I like most about the Injustice series is that in every single issue THINGS HAPPEN!

I know, I know – things happening in every issue, what is this? Dragonball Z Kai?? (as four people on the internet chuckle) But really, every single issue. What’s more, these comics are a veritable “who’s who” of the DC universe. They’re really bringing EVERYONE into the limelight in Batman’s continual fight against Superman and his regime.

*RECAP SO FAST IT’LL HAVE THE FLASH GOING “WOAH”*

We last left off with Batman pulling a wild card and calling in Wonder Woman’s family (The greek gods) into the fight. Wonder Woman is forced by Zeus to fight alongside Batman’s regime lest her mother be killed. The Greek Gods aren’t very pleased with Superman taking complete control over the Earth and are even less pleased when Shazam kills Hercules.

After Shazam kills Hercules, Zeus is piiiisssseeedd. If you have any knowledge of Greek Mythos, you know that pissing off Zeus is a big no no. In retaliation, Zeus straight up takes away Shazam’s powers with the explanation being that Zeus “allowed” Shazam to have his powers as Shazam’s powers essentially come from the Greek Gods themselves. If that wasn’t enough of a shock (hah lightning humor) out of nowhere Harley Quinn comes out of the fray to try and avenge her “Shazzy.”

Boy, was that a mistake.

READ: BATMAN COMICS KEEP ON HAPPENING! CHECK OUT OUR REVIEW OF BATMAN #43!

In the other corner weighing 400 lbs armed with omnipotence, lightning, godly strength, and about a billion other powers Zeus

He kills her with a thought

So Harley’s down, and everyone’s spandex are now presumably a bit wet.

With this show of power, it seems that Batman’s plan has one, though with some unfortunate deaths that even he couldn’t see coming. Superman disbands his army, with the promise that the fight is not over.

READ: YOU PROBABLY HAVEN’T HEARD A GOOD DEFENSE OF THE FANTASTIC FOUR MOVIE. WELL, WE’VE GOT ONE!

READ: WE ACTUALLY HAVE TWO!

The most interesting moment of this comic, and a moment that I took pause on, was the final panel of this issue which showed “news headlines” saying things like “Vatican Denounces Zeus,” “Greek God Invasion,” and “Where is Superman?”

*Also, Hot Singles In Your Area*

In a comic entitled INJUSTICE: GODS AND MEN, up until now the “Gods” referred to in the title were the superheroes on both sides of the argument. Superpowered entities forcing their wills on the “lesser” beings in order to keep order. But as we can see in the final panel, the rest of the world doesn’t see it like that. The world doesn’t see superman as a “God” but as protector, a physical entity built from reality and shown before their very eyes. Which really begs the question: What is the difference between Superman and the Greek Gods. Surely, the Greek Gods appearing before the mortals of the world make them cut from the same cloth as Superman, powerful beings, obviously real, who impose their will on the human world. Where they differ, all comes down to PR.

Superman is Superman, and although he’s now controlling the world and killing those who oppose him, the world still sees the red, white, and blue defender of Justice. They trust him implicitly. He’s proven time and time again that he’s a “hero” and “on the good side,” and there’s not much that can pull the wool from over their eyes.

Zeus on the other hand, is the stuff of legend, taught in school and studied in academies. Zeus doesn’t rescue kittens from trees, or help little old ladies cross the street – he cheats on his wife and kills for pleasure. So even when he’s standing up for freedom and backing up the “good guys” the stigma stays with him – a stigma which ultimately could tilt the tide in Superman’s favor. 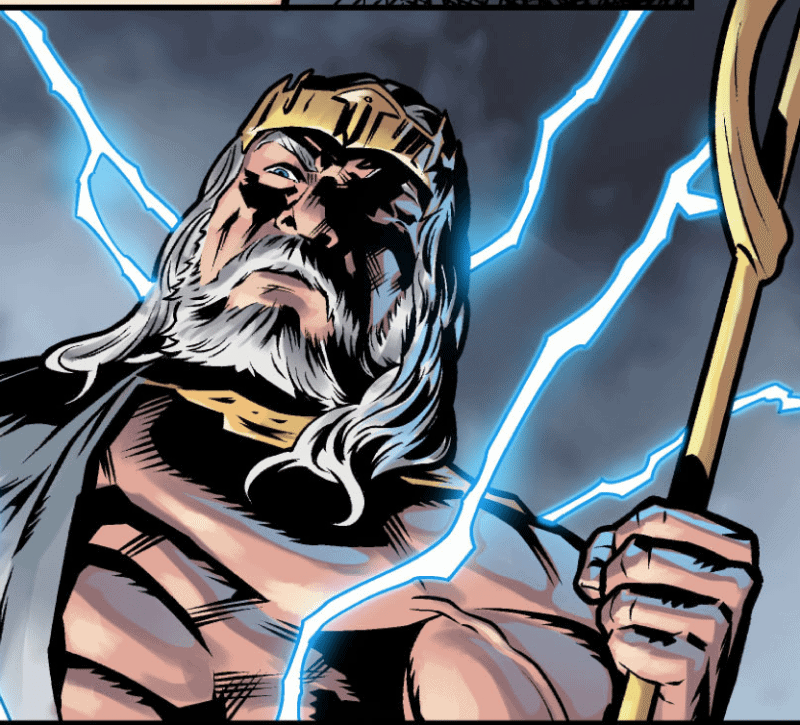 *Pictured Above: Totally friendly guy who’s got your best interests at heart*

We already know Superman isn’t defeated by Zeus (or else there would have been no Video Game that takes place after the events of the comic), so it’s going to be interesting to see how Supes works his way out of this one.

Remember Kids, Zeus is your friend, even if he occasionally murders your favorite psychopathic mallet wielding character.