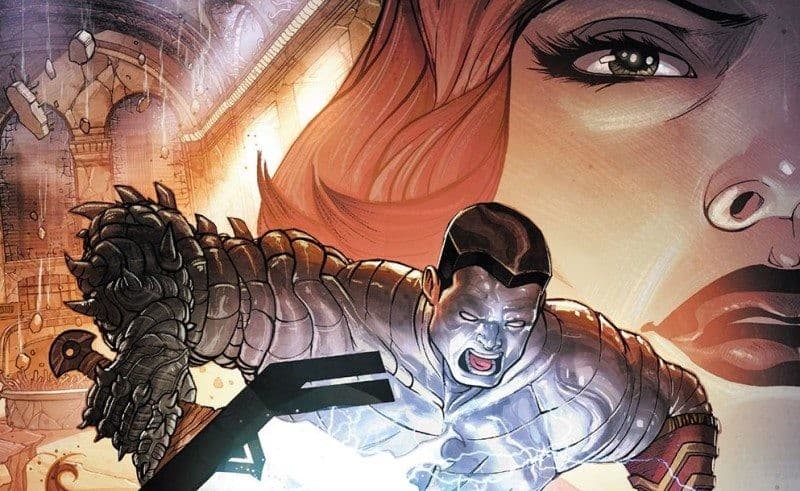 Can Colossus take charge of the armies of Hell?  We welcome new reviewer CJ Nash!

Secret Wars’ Inferno #2 opens up on the streets of Inferno. We have some orange creature, presumably a demon, elbow deep in the torso of poor old Boom Boom. There is talk of a “Master” of some kind, but we aren’t yet privy to that information. Immediately, we are taken to the Goblin District of Inferno where we have Maddie holding Colossus over a goblin pit. At first glance, it seems that the Goblin Queen is offering Piotr to the goblins as a sort of offering, but we soon learn that Maddie is simply putting Colossus to the test. As we are witness to Colossus’  triumph over the goblin horde with Illyana’s Soul Sword, we learn that Maddie plans to have the iron-like giant lead an army of demons into Darkchild’s (Illyana Rasputin’s) tower. 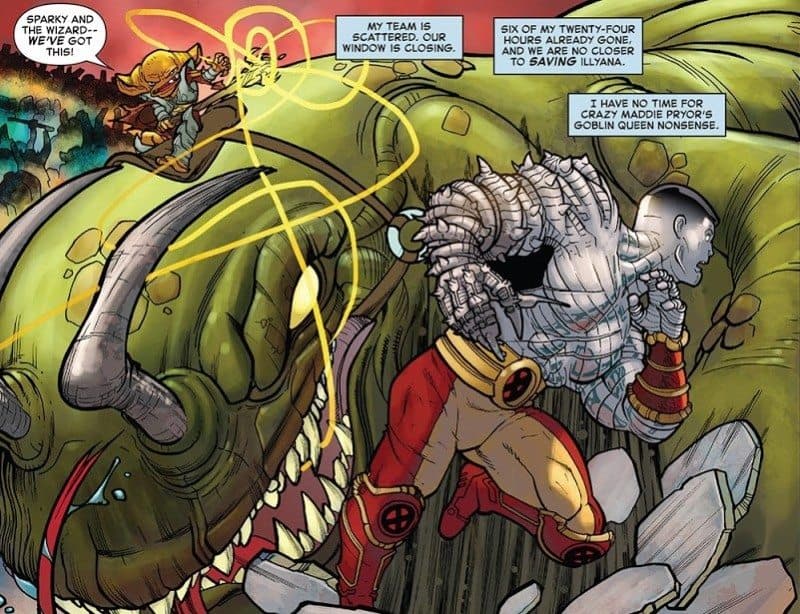 Cut scene and while Domino is being held captive in the Goblin Queen’s prison, she is…” released” by a metal laden tyke wielding a very impressive gun. Unsurprisingly, Neena and the young one bond over their knowledge and liking of guns! We then move to Darkchild’s place of operations, where we see that she has Nightcrawler in her clutches, her henchman remarking upon Kurt’s pedigree and faith. In Maddie’s fortress, Colossus and the Queen herself discuss her intentions to gain control of Inferno while debating the outlook of Darkchild’s soul. Careening in comes a bomb-and-cannon loaded Domino tailed by an objectionable young gun enthusiast, the son of Madelyne Pryor, Nathan (professing the name Cable). Cut scene to Colossus invading Illyana’s tower and the appearance of Nightcrawler as we’ve never seen him before, an actual Nightcrawler. 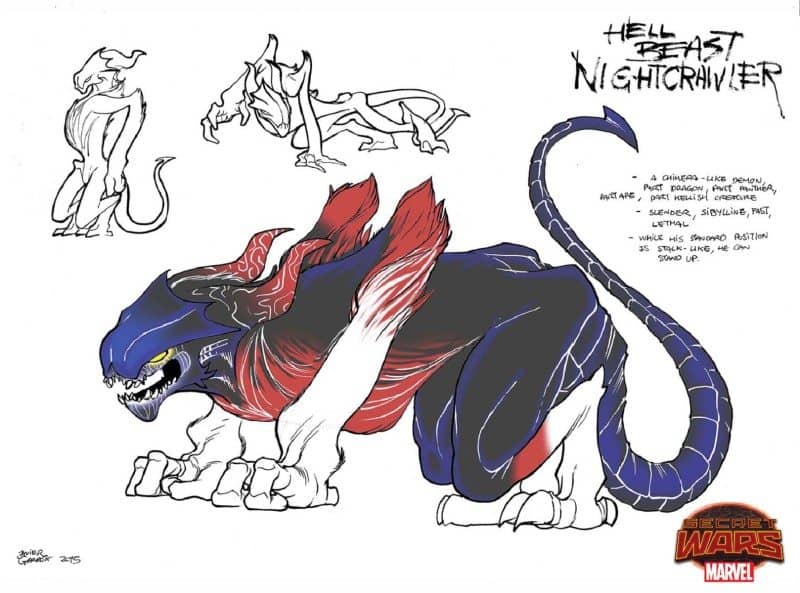 The Best Part: Usually this is the last thing that I would comment on, but Javier Garron’s art in this issue is some of my favorite. Unlike Scott Koblish’s issues of X-Men ’92 that are skimpy on the detail of each page, Garron’s gives depth to every part of the page (and it is exquisite). Also, the look of confusion that Neena and Piotr portray once they get a look at Colossus and Cable together!

My Aggravator: This was a typical X-Man book with all flesh and no meat, the artist was heavily relied on to carry the book while the writer is required to do very little in terms of character depth and story line. Though this story line is completely original to me, it seems like a shallow concept that could have used more dialogue. Although I am only 19, I do miss the days when speech bubbles took up half of a panel and the reader was able to grasp the story line.

My Surprise: The presence of Nathan/Cable, he’s adorably weird in his depiction and his Goblin Prince identity already surpasses classic Cable.

My Prediction: Colossus will use the Soul Sword on demon-crawler and turn him back to good ole half demon Kurt. Nathan will be an adorable tyke reminiscent of Damian Wayne in the Batman & Robin comics, a bit of a bad seed that you just can’t help but love! 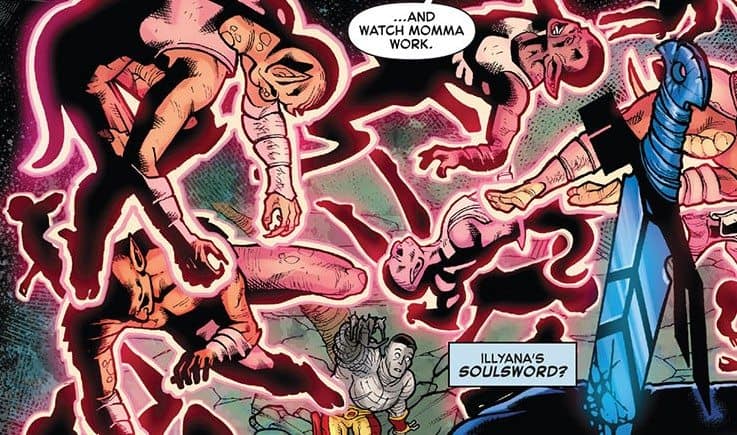 My Change: Character depth and scant writing aside, the one thing that I would change is Nathan/Cable. Here’s why: he comes off a bit zombie-like with his flesh/metal mixture that unsettled me when his character first registered as young Cable, and it’s just creepy.

My Commentary: I am not well versed on the classic Inferno acclaimed by X-Men and Maddie fans everywhere. In addition, I am not familiar with the workings of X-Force—the one X-series that I have yet to read in any iteration. So, I am looking at this from a virgin perspective. Illyana’s use of Kurt as a weapon was quite nice and I can’t wait to see where it goes.