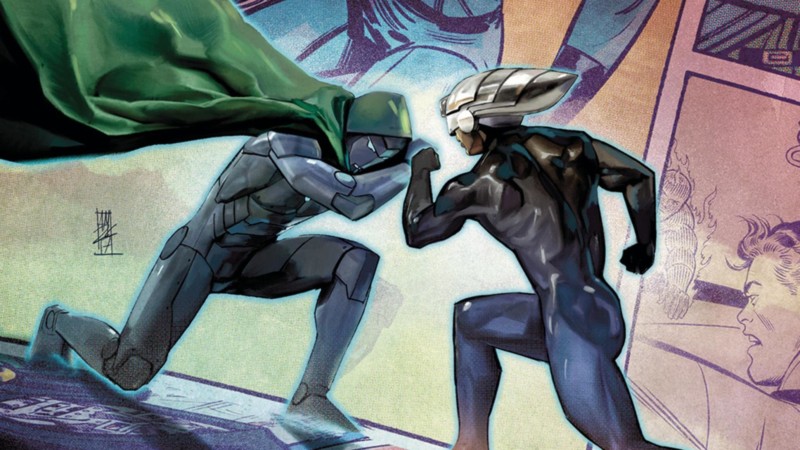 INFAMOUS IRON MAN #8 is a very Bendis-like story. The plot is heavy in dialogue, and the majority of the comic deals with two separate and intriguing conversations. While there isn’t much action, the story moves along at an excellent pace and gives us a few directions to look at in the series. If you’ve been enjoying INFAMOUS IRON MAN thus far, you’re going to love this issue. If you’ve been reading Bendis’ work for the past few years, you’re going to go even crazier on the last page.

As mentioned, INFAMOUS IRON MAN #8 has two key conversations. One is between Victor and Riri Williams. The young hero flies to Latveria (against Tony Stark’s wishes) in search of Victor, or, at least, in search of clues indicating his whereabouts. Her banter with Tony is natural if you’ve been reading INVINCIBLE IRON MAN, but it’s nice to see it in this series with Alex Maleev’s artwork portraying their facial expressions. Eventually Riri comes face-to-face with Victor. The two have a somewhat pleasant conversation, despite Riri’s initial determination to take him down.

It is at this time Victor explains his recent epiphany. He asks Riri to attack him, explaining that the extreme pressure of a battle seems to take him into a trance. Riri is hesitant, thinking it all delusional, but Tony Stark gives her the okay. The scene switches to Victor in his trance, where he encounters a character not seen since Bendis’ UNCANNY X-MEN ANNUAL that debuted about two years ago.

WATCH: Interested in other books coming out this week? Here’s our Weekly Comics News Show!

While all of this is occurring, the Thing encounters Maker, the Ultimate Universe Reed Richards. Ben is unsure what to believe but eventually settles down and listens to what Reed has to say. After a skeptical conversation, this version of Reed tells Ben one thing to do: kill Victor Von Doom.

Overall, INFAMOUS IRON MAN #8 is a stellar issue. This is where Bendis shines. His incorporation of humor and stern dialogue coincide nicely, while his world building ability is utilized to its fullest potential. Seriously, read his X-Men annuals from a few years back. I haven’t felt this excited after reading a single comic in a while. Furthermore, the structure of the comic itself is implemented well. The way the scenes change from one conversation to the other flows well, and the mood is evident in the words the characters speak.

And then there’s how the changed Victor feels so natural now. It gives Bendis the opportunity to explore the Marvel Universe more instead of focusing on convincing us Victor is doing good for the time being. Victor isn’t entirely likable, but he feels real. He is arrogant, and that’s why I love his character. He’s much more selfless, but he’s still so self-absorbed and convinced that the universe revolves around him in a way. He’s both questionable and affable, a juxtaposition not easily maintained. However, it’s held extremely well in this series.

Of course, this is all made possible with the artwork of Alex Maleev and Matt Hollingsworth. Because INFAMOUS IRON MAN #8 is heavy in conversation, Maleev’s facial expressions are integral. He does great, and the darker colors from Hollingsworth assist well with the somber tone of the dialogues. In particular, Ben Grimm’s anger and confusion are represented well, and the contorted result is painted perfectly on his face. It appears that this team is going heavily into the mystical side of Victor’s life as well, so the colors of Hollingsworth continue to paint all of the magic going on beautifully.

It’s Only Going to Get Better

My only real criticism of INFAMOUS IRON MAN #8 is the uncertainty of Thing’s knowledge about Reed and Sue. In INFAMOUS IRON MAN #7, it felt like Ben knew that Reed and Sue were still alive somewhere, but his conversation with Maker has me thinking otherwise. Much of the changed history post-SECRET WARS is still unclear, and I wish Bendis took the opportunity to use some flashbacks and show us what these characters remember happening. That being said, there’s still plenty of time for such revelations.

READ: Bendis has a massive bibliography. Here’s an analysis of one of his most critically acclaimed series!

INFAMOUS IRON MAN #8 is another exuberant chapter in one of Marvel’s best ongoing series. Bendis’ characterization of the four main characters in this issue is fantastic, and his ability to plot across multiple series and years is using the superhero comic medium to its fullest potential. If you haven’t been reading this series and are just keeping up with the reviews, do yourself a favor and read it all firsthand. This is going to be an integral comic for future Marvel events.