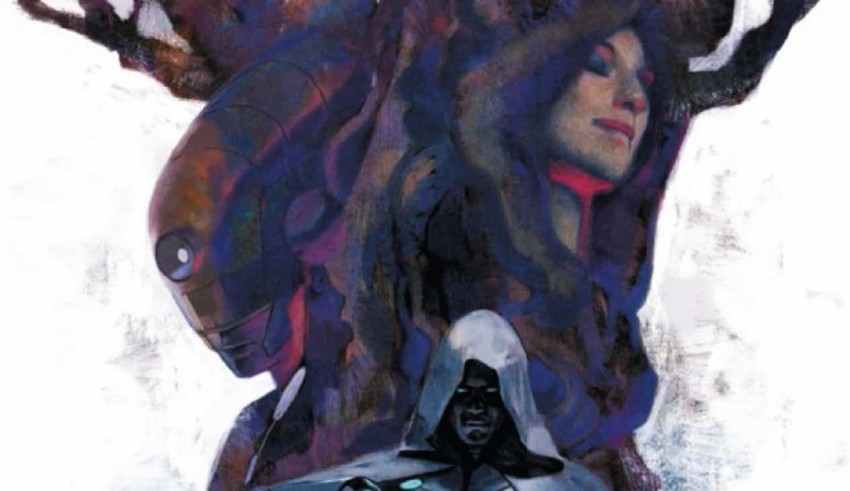 INFAMOUS IRON MAN #6 furthers Victor’s quest of becoming a hero while adding a few interesting factors to this story’s equation. Brian Michael Bendis continues making Doom’s shift towards heroism believable, and Alex Maleev and Matt Hollingsworth’s artwork maintains its cool and photogenic aesthetics. While not a lot explicitly occurs in INFAMOUS IRON MAN #6, the use of a flashback scene and Doom’s apparent vendetta against former allies (current villains) make for a very intriguing issue.

The story begins with a glimpse into the past. Victor and Reed Richards are in a laboratory at State University, where Reed insists on assisting Victor with his current project. Victor is as arrogant as ever, calling Reed insipid and ignorant while ridiculing Ben Grimm’s intelligence in the process. While Victor is meant to be portrayed as a stubborn jerk in this scene, I couldn’t help but notice how somewhat annoying and persistent Bendis is portraying Reed. He is essentially psychoanalyzing Victor while ignoring Victor’s request to be left alone. Reed is intruding, in a sense, and I like that. It makes for a more realistic situation of their interactions together.

We return to present time where Victor finds the Wizard and attempts to apprehend him, though, to Victor’s surprise, the villain is easily able to defend himself in the scuffle. A chase ensues until Victor is distracted by a giant blue light, apparently invisible to all others, and the Wizard takes a finishing shot at him. This leads to a run-in with a group of S.H.I.E.L.D. agents lead by Sharon Carter. There are a few significant spectators, one of whom being Riri Williams from Chicago, who watches this battle taking place in Pittsburgh. This has me excited for what’s to come in next month’s issue.

There were a few things that really stuck out to me during this issue. One of those is Victor searching for villains he has worked with in the past and apprehending them. This not only shows that Victor is on the side of justice, but also showing no remorse leaving his previous life of greed and selfishness. He’s still a complete egomaniac, but that’s a good thing: that’s who Victor is. Bendis’ choice to keep this side of Victor in place and showcase it like he has been doing in the INFAMOUS IRON MAN series is brilliant. In this issue in particular, I love when Victor is facing Sharon Carter and states that he will only speak to Maria Hill, even after countless demands on Carter’s part. Even though Victor is now willing to appreciate and save all life, he still finds himself above much of it.

One of the other aspects of INFAMOUS IRON MAN #6 that struck me while reading was the reemergence of Maker, also known as Ultimate Reed Richards. Maker was seen in the previous issue comforting Victor’s mother, and in this issue they seem even more intimate. I enjoy that the fallout of SECRET WARS is still having repercussions, and it makes sense that many of them would be in the story that involves Victor, the former god of Battle World.Alex Maleev and Matt Hollingsworth’s artwork maintains its quality in INFAMOUS IRON MAN #6. I suppose what’s different in this issue is the action, where we see Victor flying around Pittsburgh in pursuit of Wizard. I found this scene to be smooth and extremely comprehensible, and the cool color schemes from Hollingsworth make for a pleasing palette. In particular, I really love the blue, green, and purple lights that represent magical attacks and technological combustions. I believe the book is really trying to represent the many energies that are occurring while Doom maintains this Doom mantle, and these distinctive color schemes showcase that well.

LISTEN: Marvel is full of change and diversity. Here’s our podcast on the Muslim heroes in Marvel!

My only real criticism with INFAMOUS IRON MAN #6 is the ambiguous moment during his fight and flight with Wizard. There is a giant blue flash that appears to reveal some type of mechanism, but it’s unclear what exactly it is. It’s also uncertain if Wizard saw this too, or if only Victor is witnessing the scenery. The reason I don’t like this is it’s debatable (as of now) if this occurred only to Victor or not. It’s a very sudden event and while it makes me curious, it had me reread the page a few times.

Overall, INFAMOUS IRON MAN #6 is a wonderful comic book. This series is one of my personal favorites being produced by Marvel right now, and it’s Bendis at his finest. It also helps that the artwork from Maleev and Hollingsworth is continuously on point. I’m so interested to see how Maker gets involved in all of this, and it makes me reminiscent for the Ultimate Universe and the reappearance of characters from that Marvel line. I guess anything is possible if Doctor Doom is on the side of justice, right?