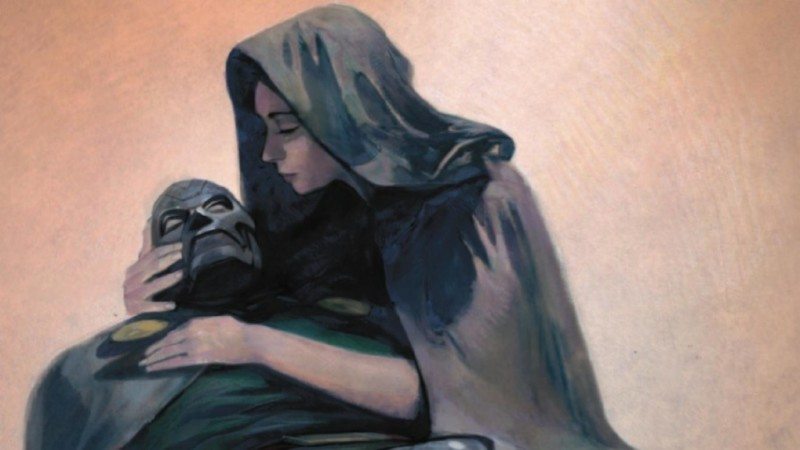 INFAMOUS IRON MAN #5 begins right after the last issue’s cliffhanger ending, with The Thing and Maria Hill attempting to piece together what happened in Victor’s castle. The story is stoically told from a future perspective, where two major flashbacks reveal the critical details. Writer Brian Michael Bendis is on point with his characterizations, and the art from Alex Maleev and Matt Hollingsworth delivers cool aesthetics to the characters and scenes in this comic. INFAMOUS IRON MAN #5 continues the pacing and tone the series has consistently put out thus far, while bringing in new threats in a non-forceful manner.

READ: Need to a reminder of where we’re at in the story? Here’s our review of the last issue!

The issue begins with Thing attempting to recall what exactly happened in Victor’s castle. Maria Hill slowly gets the information out of him as Thing comes to terms with what he heard and saw. A flashback occurs: the woman who attacked him in the castle claimed to be Victor’s mother, a witch he thought to be dead. In fact, she’s been in hiding this entire time, ashamed of what Victor has been doing with his life. It is not until he became a hero that she wished to address him. Victor is far too skeptical to believe this woman could be his mother, and they fight. The plot jumps back to the present where Thing witnesses S.H.I.E.L.D. foot soldiers swarming Latveria. 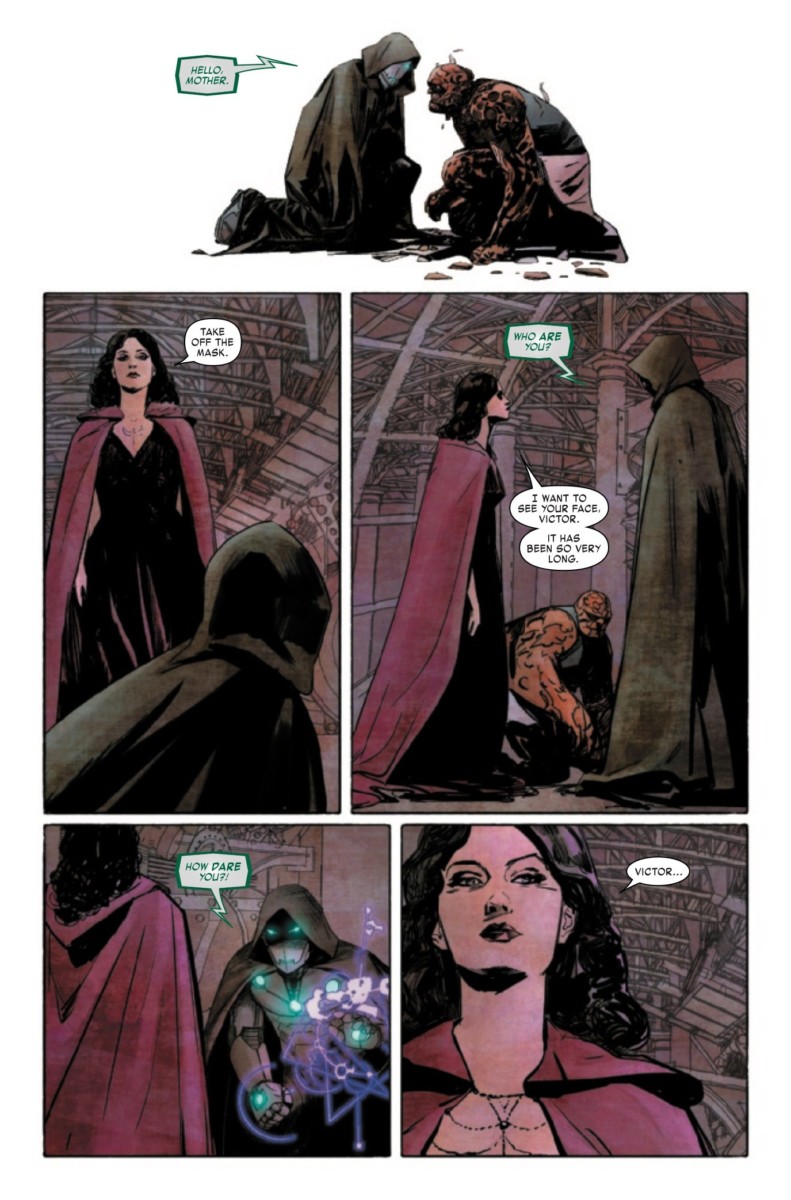 Later, Dum Dum Dugan and company confront Amara Perera in her lab about Doom’s whereabouts. She simultaneously receives a letter from the chancellor’s office asking her to resign. Distraught, she closes her eyes for just a moment only to find Victor when she opens them. After a few shared words from her, she asks about his interaction with his supposed mother. The flashback sequence is finished as Victor explains the story, and we learn of his mother’s escape.

INFAMOUS IRON MAN #5 furthers the plot Bendis has been weaving for the past year and a half, while finally giving Doom the proper struggle he as a protagonist rightfully deserves. It’s clear he can combat almost any enemy, but now he’s dealing with someone personal: his mother. This strife has the potential to make Doom even more complex, especially because of the twist at the end of this issue.

I particularly enjoy the way the story is narrated, having Thing begin the flashback and Doom finish it towards the end of the issue. I enjoy non-linear plot lines because they create an uneasiness in the reader, which is what I believe Bendis is trying to achieve with this new moral Doctor Doom. As Thing finishes his half of the narration after admitting, “Doom saved my life,” it appears as if the whole story isn’t going to be finished. It’s a frustrating moment at first, because moments like this in INFAMOUS IRON MAN have not been concealed from us readers thus far. However, it keeps you reading, craving for more details, and it becomes clear that Bendis was teasing out the issue rather than simply leaving out plot details.

In addition to the great plot line, the smooth dialogue and characterization are also worthy of recognition. Bendis’ dialogue makes the book a page-turner, and his portrayal of Victor is absolutely wonderful. It’s like seeing Lex Luthor attempting to join the Justice League, except it’s much more believable because his arrogance is not being hidden. At one point in Victor’s conversation with his mother, he casually states that he’s essentially the Sorcerer Supreme. He’s not claiming to be an entirely new man. Rather, he’s pointing out that his goals have changed. He’s capable of evolving as a character because he is so very human. This is also shown in his interaction with Amara at the end of the issue, which reveals how vulnerable Victor is at this moment in his life; his mother’s resurfacing simply widened his mental wounds. 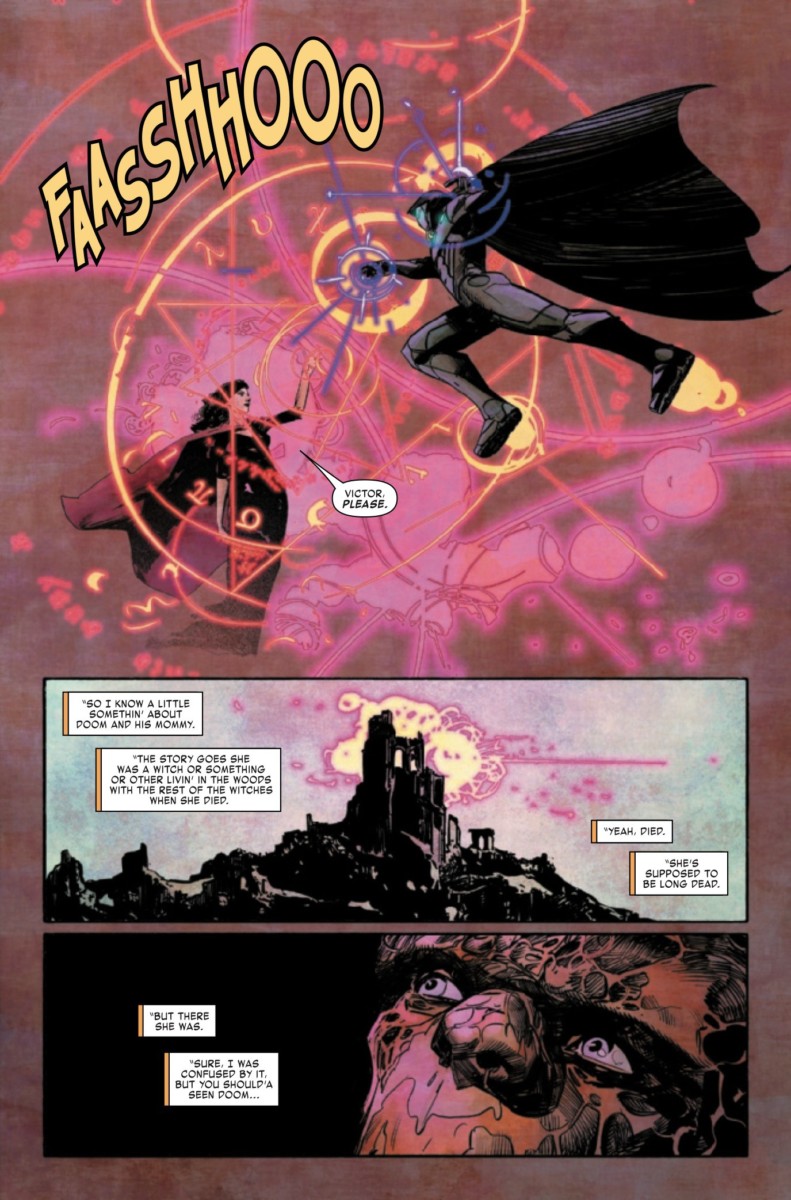 Alex Maleev’s art is as good as ever, and I especially enjoy how he draws Thing. At one point during the first flashback, Thing is shown kneeling on the ground as the rocks that form his skin slowly fall from his body. The dazed look on his face causes the reader to feel his confusion of everything going on around him, and it makes the scene that much more powerful. The spells circling Victor and his mother during their battle are also spectacular to look at with magnificent blues, reds, and purples, and this is due to Matt Hollingsworth’s coloring. The colors are very somber despite the intense scene, and this fits well with the overall tone of the book.

INFAMOUS IRON MAN #5 continues Victor’s intriguing journey as a protagonist. After his first appearance as a “good guy” over a year ago in INVINCIBLE IRON MAN #1, Victor has saved quite a few heroes, now including Thing, one of his greatest enemies in canon Marvel history. Despite these good deeds, Victor is still the arrogant and cocky man we’ve all known him to be as a villain. He’s the same character we as fans love him for, and this is why the story Bendis is weaving is working. Such a shift in identity can often be deemed as lazy writing, but this is far from the case in INFAMOUS IRON MAN. And perhaps what’s even more exciting is that this writing is getting better with each and every issue.