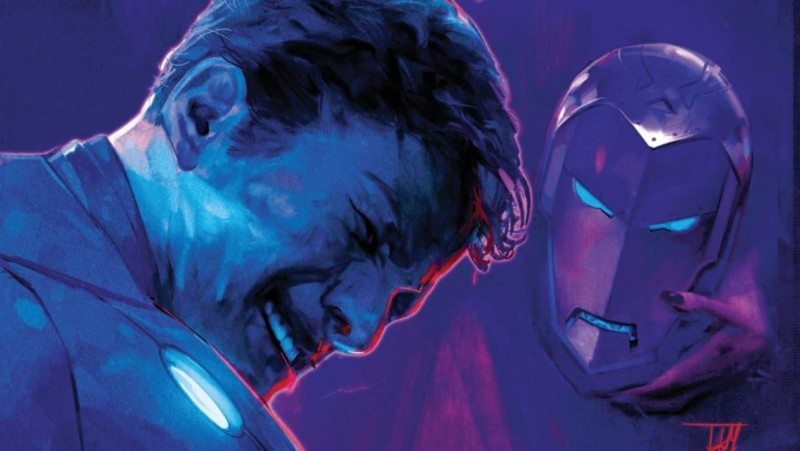 INFAMOUS IRON MAN #4 continues what has been one of Marvel’s most solid series post CIVIL WAR II. In the previous issue, we were given insight into what motivates Victor (Doctor Doom) to now be a hero. In INFAMOUS IRON MAN #4, we continue to see Victor’s attempt to prove to the world that he is now a paragon for good. Brian Michael Bendis’ characterization of this reformed Doctor Doom remains consistent and intriguing, and while nothing incredibly dramatic occurs in this chapter, the overall dynamic of the characters surrounding our new hero has me craving the next issue. 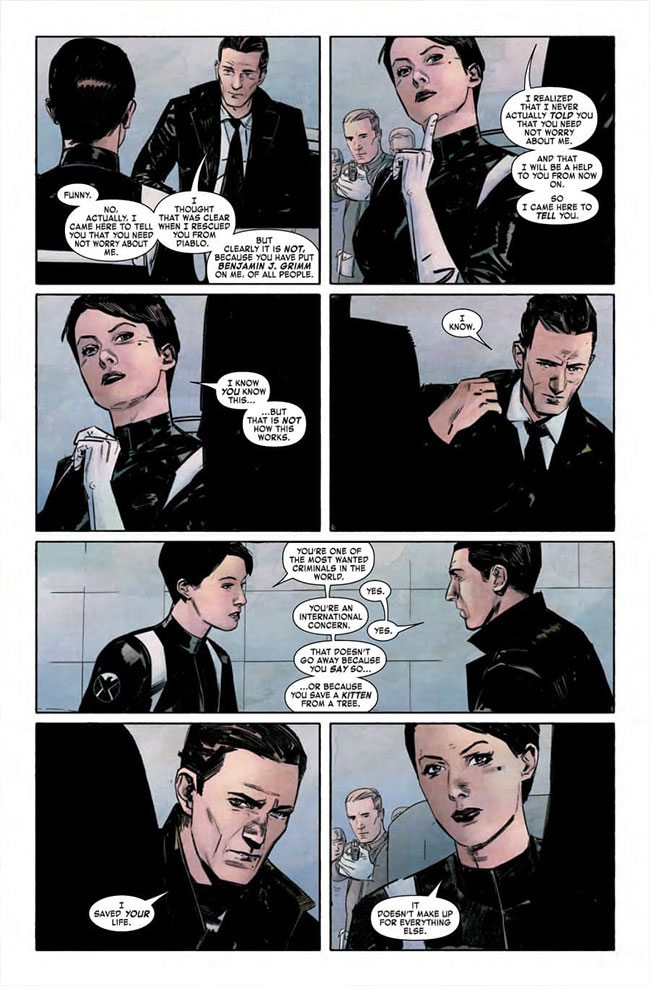 The issue starts with Maria Hill talking to her mother on the phone, only to be alerted that Doctor Doom has teleported into the S.H.I.E.L.D Helicarrier. After Maria calmly points out to everyone that Victor is in control of the situation, she sits down to have a chat with him. Victor then formally informs Maria that he is now a good guy; she need not worry about him! Of course, Maria points out (similar to how Amara did so in the previous issue) how flawed this logic is. They go back and forth until the whereabouts of Thing are revealed to Victor, and he then rushes towards Latveria to find him.

Victor, in his Iron Man armor, is met with opposition from both citizens and military. What really makes INFAMOUS IRON MAN #4 a solid issue is Victor’s behavior in his former country. Two images are juxtaposed: one showcases a former bright and prosperous Latveria under Doctor Doom’s rule, and the other portrays the dark and gritty contemporary state of the country. This obviously saddens Victor, especially when he comes across children holding assault weapons. Soon after this encounter, Doom battles military personal and immediately requests General Karadick, the man he left in charge of Latveria after leaving. Victor’s assumption that people should accept his word when he speaks to them portrays how egotistical he still is. Despite now being on the side of justice, he still has no doubt in his mind that his philosophy in life is correct. He never stops to critically ponder how bizarre his new behavior is coming across towards others. He doesn’t fully grasp how people cannot let go of his former life. 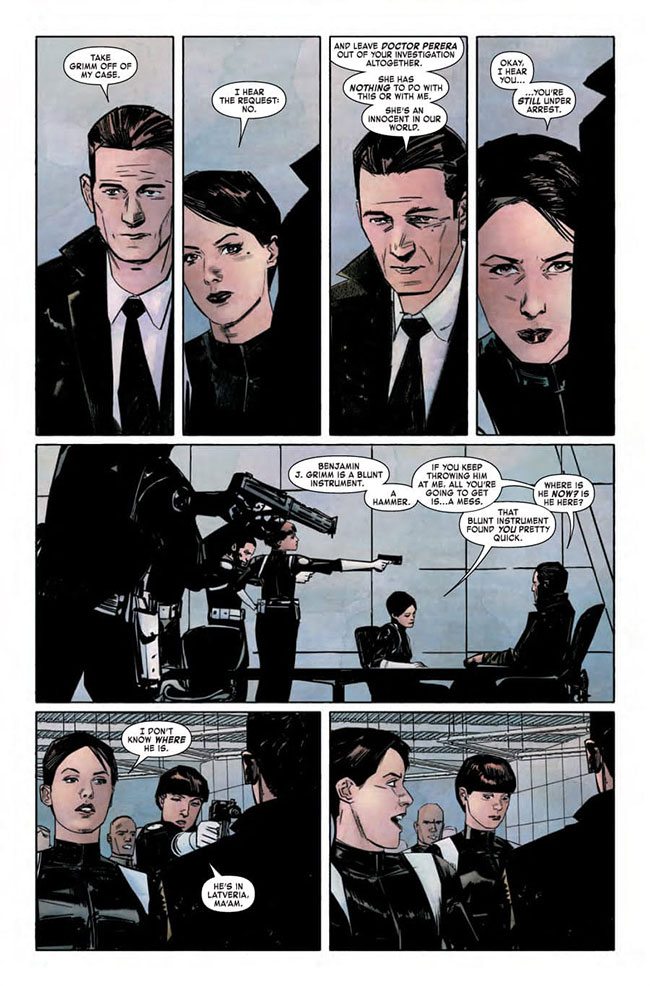 I quite enjoy the characterization of Victor in this series, particularly in this issue. You can feel the awkwardness in his interaction with Maria Hill as he explains that he has changed his ways for the better. This has been an ongoing trait of Victor since Bendis began writing him after SECRET WARS, and I think it’s something that is very fitting. Even though Victor realizes that his former ambitions only left him empty, and that he must now do good for fulfillment, he is still extremely egotistical. It’s excellent that Bendis is not depicting Victor as a completely new person, but rather like a computer with the same hardware but new and different software.

READ: Have you been following Iron Heart’s story? Here’s our review of INVINCIBLE IRON MAN #1!

And then there’s the desolate state of Latveria. I can’t help but love how Victor is still such a flawed character. Even after playing god in SECRET WARS, even after rediscovering himself, he is still too arrogant to realize that not everyone thinks in the same manner as himself. In this issue, Victor is so shocked General Karadick has let Latveria come to its current predicament, that it hardly occurs to him that a ruler simply leaving his country would have such a negative impact. This all makes me question Victor’s mental state, and I quite enjoy that dynamic.

A criticism I typically have of Bendis’ characters is when they all sound the same, or they’re too flat. But the flatness in this issue works with Victor: he’s not a very smooth guy. He is very straightforward and literal, and while that can be boring if the character is Tony Stark or Peter Parker, it works almost pathetically well with Victor. Whether or not this is Bendis’ intention will reveal itself if it remains consistent in the series. 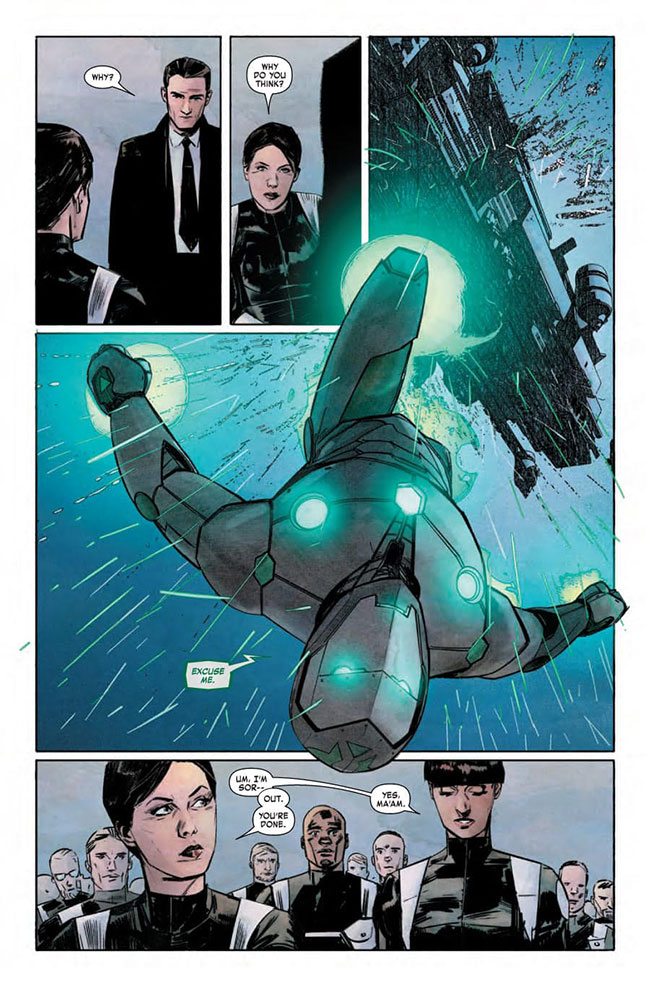 Alex Maleev’s drawings really shine in this issue, and it’s clear he and Bendis have chemistry (read their run on DAREDEVIL for more proof). Particularly, his facial expressions of Maria Hill and Victor represent their internal thoughts very well, and the overall spacing of his characters and settings are pleasing to the eye. Like previous issues, there are pages where no dialogue is spoken. Only the art is telling the story, and Maleev is excellent at depicting the emotions of characters through their faces and movements. Of course, the coloring done by Matt Hollingsworth assists with this aesthetic. His cool and dull tones always give characters a rougher demeanor, and that works in this series because of the overall mood of the story.

READ: Do you forget how SECRET WARS ended? Read our review of the final issue!

INFAMOUS IRON MAN #4 is a fantastic issue. I was hesitant to begin reading this series when it was first announced, but I’m very happy I decided to get on board. Bendis has a knack for writing complex characters, and while I found his depiction of Iron Man to be good but slightly over the top, his portrayal of Victor is, in my honest opinion, very unique yet interestingly true to the character. I’m excited to see where this series leads Doctor Doom on his new quest.