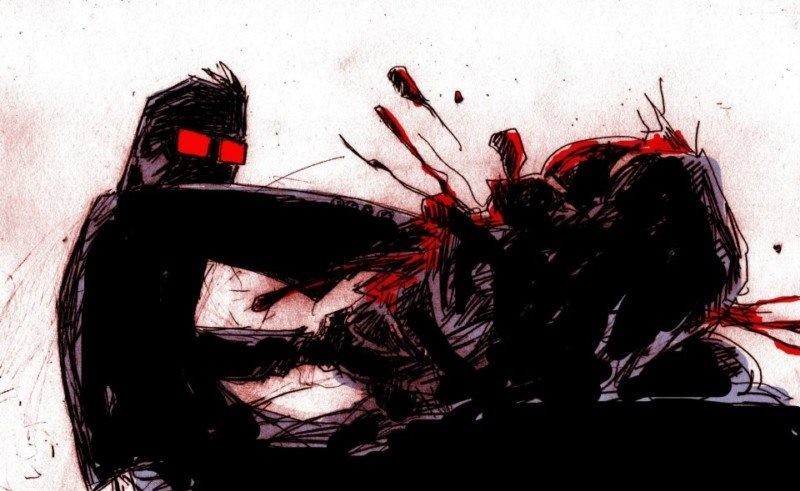 Page from Sun Bros comics
Wesley Sun explains his process and how he got his start in the comics biz.

Welcome to the third installment of THE INDIE SPOTLIGHT, a series in which we interview indie comic creators. For some, we’ll be discussing what is one in a long line of creative projects. For others, we’ll be talking about their first big project. Today’s interview features Wesley Sun, one half of Sun Bros Studios, an independent comics creator duo based out of Chicago.

Wesley makes comics with his brother Brad Sun who currently resides in Boston. Together they’ve published three books since 2012 and appeared in various anthologies as well. Arguably their most well-known book is CHINATOWN, a psychological horror story about an immigrant community in which a little girl goes missing. They’re also the brains behind APOCALYPSE MAN, a genre inversion of zombie survival, and MONKEY FIST, a retelling of the Monkey King myth that places the titular character in a nautically-themed fast food restaurant. In this interview Wesley Sun talked about breaking into the industry, inspirations, and where Sun Bros might go from here.

ComicsVerse: What gave you your spark? What made you want to start making comic books, and how did you start?

Wesley Sun: We launched our first book, CHINATOWN, in 2012, but the seeds of the idea were years before that. It must have been when we were in high school. We didn’t even call it CHINATOWN. Brad and I were kicking around ideas for what we just called “the story.” We thought that there should be a Hong Kong Kung Fu inspired film but with monsters and supernatural phenomena. Brad was going to college at the time and came to me and asked, “How serious would you be about actually putting a script together?”

I had no aspirations to be a comic book writer. We were always telling stories when we were kids. We played role-playing games, which is storytelling, and we read a lot of comics. We had this idea for a story. And there was no idea we would start a company or anything. Brad was getting a fine art degree at the University of Florida and I had zero ambition or understanding of where it would go. That’s where it started—I didn’t want to be a comic book writer, I was just interested in storytelling. My brother was the one who was saying, “I am an artist and I’m interested in comic book art, what if we actually did it?” and I said “sure.” I didn’t set out on a path to do it, I lucked out because my brother was a comic book artist. 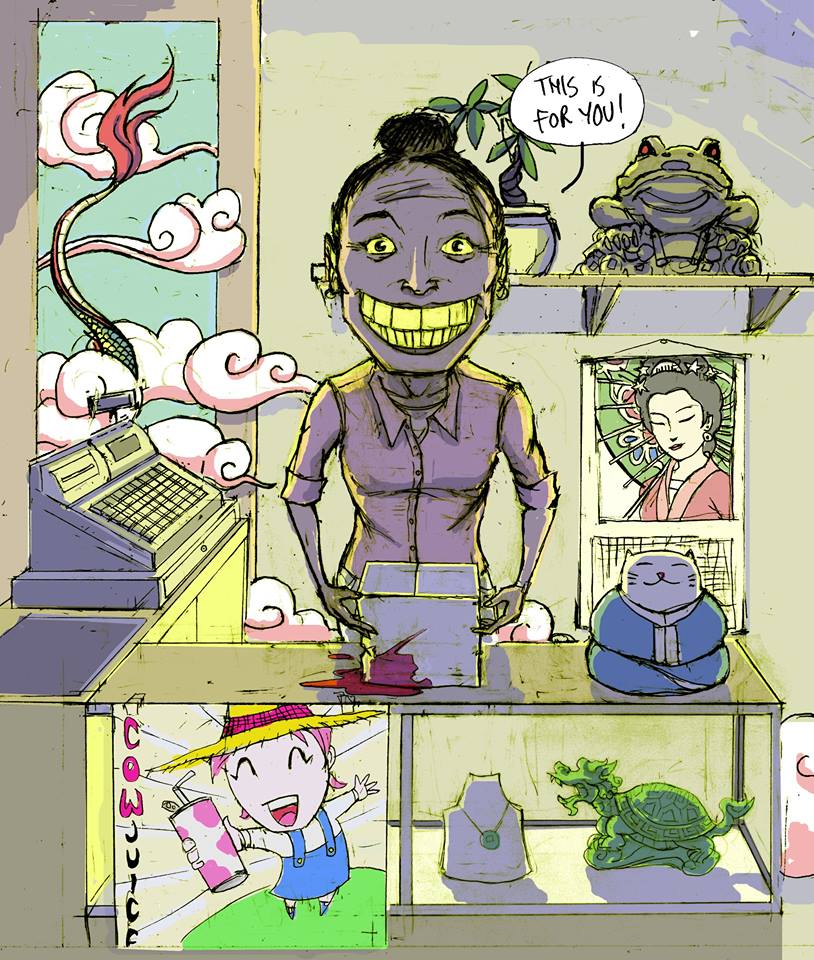 CV: What are the stories you want to tell?

WS: I’m essentially asking people to do a thought experiment with me. All my stories are about meaning-making, asking the question, “Why continue living and creatively viewing the world with meaning?” There is a natural drive to find meaning where there is none. Show people stars in the sky and they will find constellations. Life itself is no argument—the question is how we go from mere survival to real flourishing. So I want to write stories that call attention to the fact that we are creating meaning.

CV: But a lot of your stories have a magical or supernatural element, the trappings of a lush imaginative style.

WS: Right. Our stories all fall into the category of psychological horror. They portray the idea that life can be terrifying—but terrifying in a good way, in an existentially healthy way. There’s also a lot of magical realism because I think the best stories can be read on a number of levels. Take KING KONG for example. It’s really about coming to this country in chains and the fear that a creature from Africa will steal our white women. But even if you don’t get the metaphor at all, it’s still an amazing monster movie.

In the same way CHINATOWN is really about the older generation coming to the realization that their community is changing. They have the choice to move forward and adapt to life in a new country, or to move backwards and seek out the old formulas. But even if you are completely tone-deaf to that strata, you’re still going to see a monster shot with guns by Chinese triads. I’ve heard it said that you should never use a simile when you can use a metaphor. If you’re saying that something is like a monster, why not have it just be the monster? Our other book APOCALYPSE MAN is about humanity and survival, but it’s also about giant aliens laying eggs in people’s faces as they explode.

CV: What comics do you see as inspirations?

WS: I think that Garth Ennis’s PREACHER was really informative—not because I want to do a book like that, but because he had a way of telling a story that had an ending. Growing up I had read comics that were told in serial format. The idea that you had a complete story to tell, and you had to plot out and pace how long it took for each character to develop, and that it could be on an epic scale, really appealed to me. It made me think that we—American creators—had barely scratched the surface of how you could tell a story in comics.

Also Garth Ennis seemed to be able to write with a certain kind of freedom. He was able to tell the story he wanted, with the pacing he wanted, and have people appreciate that. He inserted his experience as an Irish immigrant into the middle of a book presumably about a Texas preacher looking for God and people accepted it because it rang true and authentic. I’m not trying to write a story about an Irish vampire, but I am trying to develop my own voice.

CV: How about your influences from outside comics?

WS: My favorite novelist is named Shalom Auslander. If you can’t tell, Shalom is Jewish. He writes what he knows from his life, and he’s hilarious. My favorite book by him—actually, probably my favorite prose book ever—is called HOPE: A TRAGEDY. He also has a memoir called FORESKIN’S LAMENT and another collection of stories called BEWARE OF GOD. I think his treatment of theology, religion, and God is so authentic and so true. He has a way of tackling really profound dark material like religion, genocide, and death in a way that’s really playful but also gives the gravity it deserves. I wish I were that good.

CV: How has your experience of the Chicago comics community been?

WS: It’s been wonderful. I’ve found that there’s no barrier to entry. I’ve found comic book people not just in Chicago but everywhere I’ve been to be warm and welcoming and accepting of new artists. People are incredibly nice. They’re not just good people, they’ve also shared tips, information, and resources to help me succeed. In some businesses, your success means that someone else fails, but I don’t feel like comics are like that. If a customer buys a friend of mine’s book, I’m happy for them. And I don’t feel that if the customer bought their comic, they won’t buy mine. Any friendly competition with my colleagues only helps me make better work. 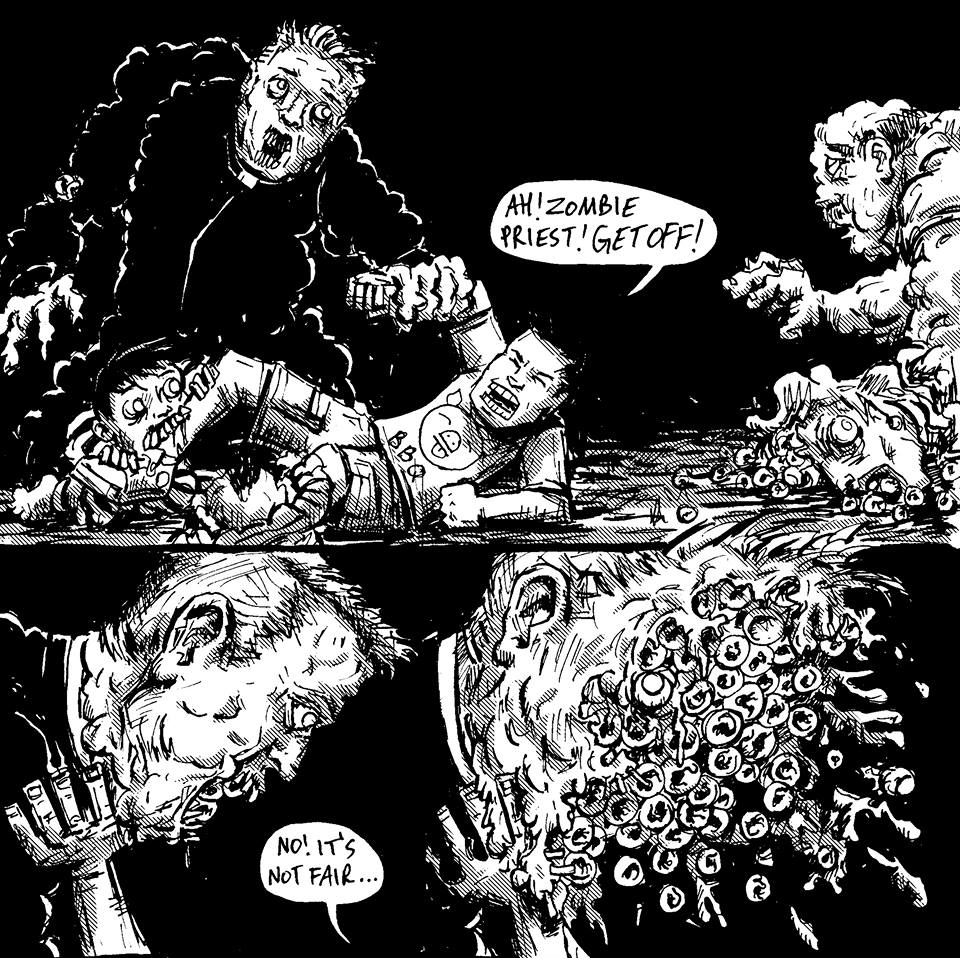 WS: I would love to work with Gene Yang. I admire his work a lot. His art is solid, his writing is solid, and his storytelling is top-notch. I was giddy like a schoolgirl when he followed us back on Twitter. And it’s for a lot of the same reasons I mentioned PREACHER—I think AMERICAN BORN CHINESE broke a lot of molds. Gene Yang was like, “I’m going to tell three stories with parallel storylines that intertwine and end up being connected, and one will be about this racist stereotype and one will be about slice of life and one will be about a mythical monkey king!” I thought that was amazing. I realized you can do whatever you want as long as it’s good and true. So he’d be someone I’d love to work with. He also seems like he would be a cool guy.

CV: What’s your favorite out of your own books?

WS: In some ways CHINATOWN, since it was our first. I don’t know if that makes it my favorite, but it definitely holds a special prominence in our body of work. And it was also the one that germinated for the longest. We were thinking about that idea for years. We put the most time into that one for sure, and not just because it was our first book and we were slower on everything.

Once CHINATOWN was out, we set ourselves the goal of putting something new out every year, which was a pretty ambitious publishing schedule—and we kept to it. But CHINATOWN we did on our own timeline and we got to put a lot of care and a lot of craft into it. It’s no accident that the cat on the cover of the book has become our mascot or our logo.

Where could you see your projects going in the future?

All of our books are intended to be stand-alone pieces. But one of the critiques of CHINATOWN is that we introduce a lot of characters but we don’t develop all of them. Part of that is intentional because I feel like that’s what it’s like to live in a neighborhood. In future works, though, I would love to return to CHINATOWN and explore those characters that didn’t get enough attention. Ultimately I could imagine writing it as a trilogy with the book we have now being the first part.

I don’t know if those books will ever be written, but I think it’s worth it at least for Brad and I to know what happens to these citizens and what their relationships are. And whether or not CHINATOWN 2 and/or CHINATOWN 3 ever come out, the hope is that the richness and the history and the arc of all the characters is read into the text of the first book.

So I do think that there’s room and even in a broad sense plans to return to CHINATOWN, but we wrote it with the intent that we’d be satisfied even if they’d never see the light of day. Same thing about APOCALYPSE MAN. We have ideas already about a sequel—when and how and if we’ll get to it I don’t know. But we write our books without cliffhangers or setups for a follow-up. We write each as a story with an arc and with a beginning and an end.