Denizens of the ComicsVerse! Welcome to this week’s installment of THE INDIE SPOTLIGHT, a series in which we interview indie comic creators about their current projects. For some, we’ll be discussing what is one in a long line of creative projects. For others, we’ll be talking about their first big project! Similar to how children are our future, the writers and artists behind the indie comics of today are the industry giants of tomorrow! THE INDIE SPOTLIGHT gives you information about new comics directly from their creators as they attempt to make a name for themselves in the industry. You never know who might be the next big thing!

This week we had the opportunity to speak with Dan Lee, creator of EVERLAND #1, which he recently published through a smashingly successful kickstarter. The book is a thrill ride where mysterious noir and cloying cuteness go blow for blow, with an original art style to boot. Dan Lee’s work ethic hasn’t slacked off since issue one came out, either. Last week he released GIFFORD #1, a shorter project which he calls “the most fun I’ve ever had making a comic.” Here’s the lowdown on his comics, creative process, and what’s next, straight from the artist himself.

ComicsVerse: Congratulations on recently putting out EVERLAND #1! How long did it take you to put together the book and draw it?

Dan Lee: Thank you very much! The version of the book that was released took about 18 months to get done, working around studio and freelance gigs. Prior to that, I spent a few years writing draft after draft, trying to map out the entire world and know exactly what would happen before drawing any of it, and that made things really dull for me. So one day I just scrapped all the drafts and started from scratch, this time going straight to drawing page layouts. When I was happy with the layouts, I wrote the dialogue and then worked on the final art. 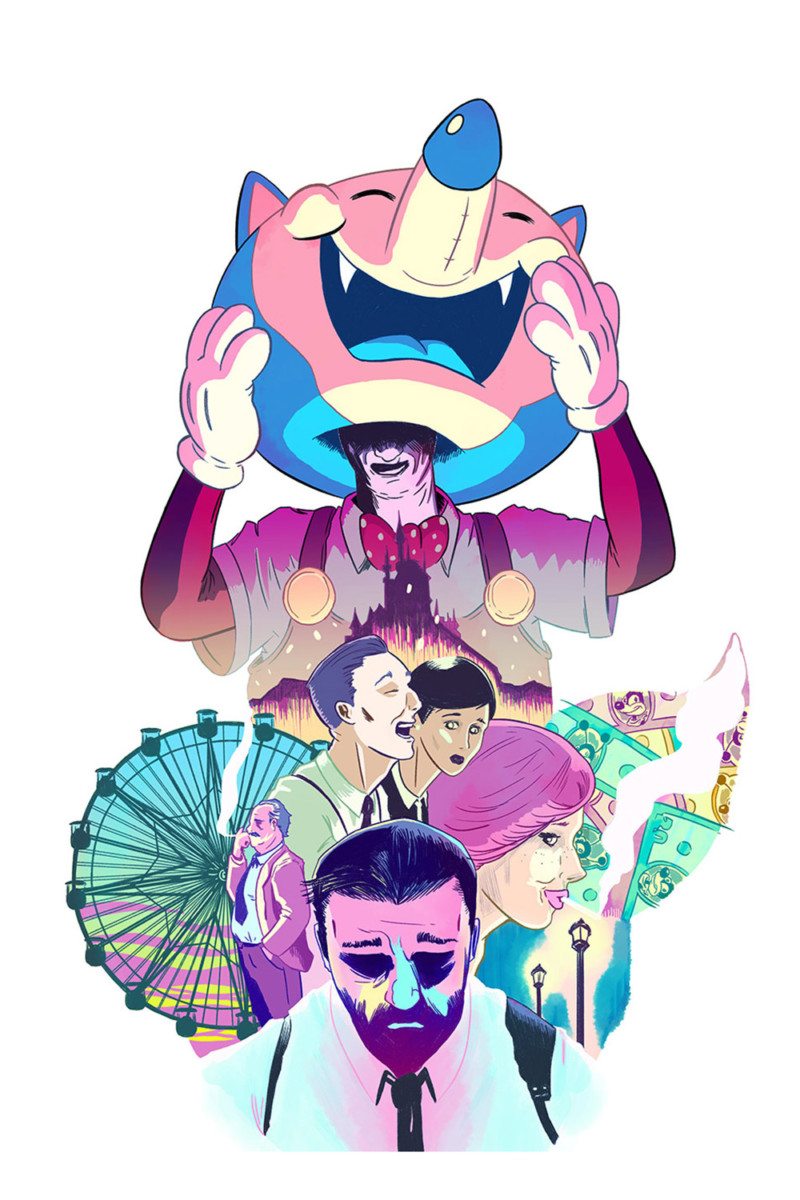 CV: Has it been a challenge to make comics living in Japan, where comics (manga) are so prevalent but also very commercial? How has your experience been juggling freelance with your own creative projects?

DL: I wouldn’t say making comics here has been more or less challenging than working on them in the UK. Manga and anime are definitely everywhere out here but I don’t find it to have much of an effect on my work.

I recently stopped accepting freelance work to focus on the comics full time. Back when I was trying to do both at the same time, I found it difficult to balance them. I would take on animation, motion graphics, and illustration freelance work, which demands a lot of creative energy to spread between those jobs and personal work.

READ: Here’s 5 Indie artists at SPX that are a must-see. Be warned: One of them might not be wearing a shirt.

CV: You’ve mentioned that Everland takes inspiration from Y: THE LAST MAN, BREAKING BAD, and LOST. Are there any other comics, books, or movies that you look up to?

DL: I really liked SCALPED. THE WINTERMEN is brilliant. COPRA too (I love Fiffe’s work ethic). I like Michael Chabon’s novels, especially THE AMAZING ADVENTURES OF KAVALIER AND CLAY. I really like Jake Parker’s YouTube videos and work ethic too. They helped a lot when putting together the Kickstarter campaign. Films and shows; there are way too many to list!

DL: Sometimes when I’m listening to music it will set a tone or a scene in my head, kind of like I’m watching a trailer for a film that doesn’t exist. Then I just make notes and sketches and build out from there. I also walk a lot too and just think things over.

My creative process changes depending on what project I am working on. But with EVERLAND, at the moment, I start by writing out brief descriptions of what scenes I want to use, breaking those scenes down into beats and then the beats into pages. I then write a loose script and begin thumbnailing the pages. I try not to get too precious with the script as I know ALL the re-writes will take place during the thumbnailing/layout stage, even the dialogue. Then when I am happy with the pacing and how the story flows visually, I pencil, ink, color and letter the book. All of this done digitally.

CV: How did you develop your style of drawing and coloring?

DL: I still struggle with sequential drawing and consistency of characters, but the coloring just sort of came naturally. I just picked the kind of colors I liked. I don’t know much about color theory, so I think my color choices tend to be bit more abstract, trying to set a tone more than going for realism.

CV: For those who didn’t watch the Kickstarter video, where did the ideas for Everland come from?

DL: I’d always wanted to work with the concept of a community that is completely walled off from the rest of the world, but could never nail down a story or characters I really believed in. Then when my brother, Darren, told me that Walt Disney originally wanted people to be able to live in his theme parks, everything clicked.

CV: What can we expect from the coming issues of Everland?

DL: This is tough to answer without giving too much away! You’ll see Vark trying to come to grips with his new life as a cop in Everland. A lot of character development and pressure building around a mystery. I plan on making things as miserable as possible for everyone involved. 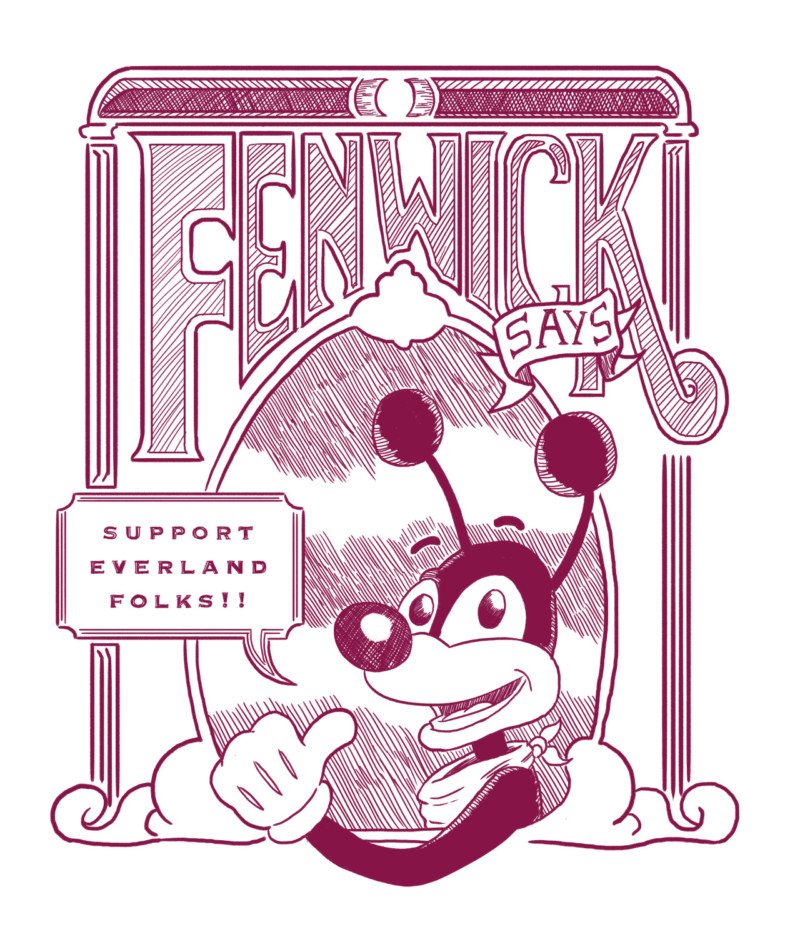 CV: Do you have any other projects in the works?

DL: There’s another comic series I write and draw called GIFFORD which I just released the first issue for. I make each issue of GIFFORD inside of a week, very fast, fun and energetic and gives me a break from EVERLAND’S heavier stuff. I’m also writing a comic called ‘PRIZED FIGHTERS’ with Job Yamen on art. It’s a kind of love story set around boxing in the future. The pages Job has turned in so far are incredible and I can’t wait for people to read the book.

CV: What did you think when the Kickstarter received almost 10 times what you were asking for?

DL: I was overwhelmed and shocked. The funding goal I asked for was just below the absolute bare minimum I would need to put the finish touches on the book and also keep my work space for another month or two to work as much as possible on issue two. I set it low because I wanted it to get funded and reach at least 50 people with it. I’ve never produced work like this before, so no one knows who I am or what EVERLAND is. Then to see people coming along and backing it, absolute strangers, it was a great feeling for me, as I felt people must be connecting with the look and concept of the book the way I had hoped. The feedback so far from everyone has been really sweet and encouraging.

To stay up-to-date with Dan Lee’s doings, check out his Twitter, tumblr, and website. Don’t forget to check out GIFFORD #1 as well. With all these new projects in the works, the coming months should be very exciting.