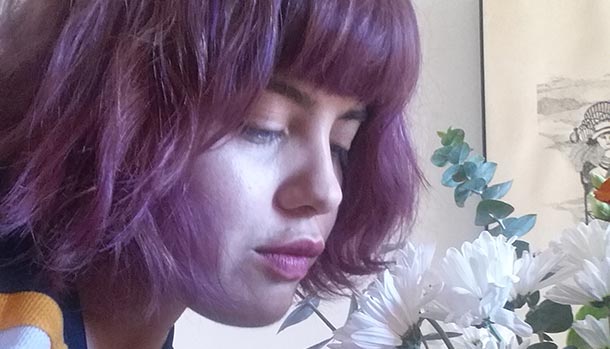 There’s something about the shoreline that perfectly captures the essence of summertime escapism. Throw in some copious amounts of psychedelics, a sprinkling of Tame Impala, and a season or two’s worth of ADVENTURE TIME, and you might find yourself caught halfway between the pastel covered pages of Paloma Dawkins‘ graphic novel, SUMMERLAND.

The book, now out from Retrofit comics, loosely details the lost weekend affair between two loosely tangled souls, Santana and Chuco, as they bounce aimlessly around the fictional fabric of a romance novel and the unwinding of what comes in life during the mornings after. The fast-forwarded lives these characters lead detail a mixture of rude awakenings and awkward rediscovery, and as the two find their way back to a civilization of nowhere fast, they begin to figure out what it means to gain something less by losing a whole lot more. ComicsVerse recently spoke with Paloma Dawkins to find out what inspired her piece and what helped her develop her craft.

ComicsVerse: What got you into comics?

Dawkins: My very first love was illustration. I started doing comics for fun when I was in Halifax, going to conceptual art school. I would do short comic stories to get away with my class assignments. After that, I got deeper into animation, just to push my storytelling to the next level. I started learning how to code and animating on sprites in Unity3D and making little art video games. Now I want to complete the loop by making comics about my video games.

CV: So, you love the narration and the visual interaction. Do you think that in the future you would be looking to do some type of interactive web comic?

Dawkins: Yeah, for sure. I just started making themes and video games that felt beautiful to walk around in, but I felt as if I was missing that storytelling aspect. I’m trying to focus on how to bring comics and video game art together. At the same time that I was drawing SUMMERLAND I was making a video game, GARDERNARIUM, and they feel like they’re both expressions of each other in a strange way. SUMMERLAND isn’t necessarily that very story driven, but GARDENARIUM is. I was trying to trade off their strengths.

CV: Talking about SUMMERLAND, how would you describe the overall story? Do you see it as character driven or more of a psychedelic trip?

Dawkins: Well, SUMMERLAND is sort of a psychedelic trip. My theory behind the book was that the first twenty-four pages would take place during the first day of summer, so that the pages gradually change color over the day. The next twenty-four pages would also be a day in the summer, but set in the future, so that I would be going through the color spectrum. This was the main idea that had been swimming around my head for a really long time, and one day I had a dream about someone meeting someone talking about a play. It was very vivid and very linear, and I combined it with [SUMMERLAND].

CV: From the way I was reading it, it seemed like the script was very melodic. Were there any artists you were listening to when making this piece?

CV: Talking about books, which comics inspire you?

Dawkins: I got really deep into [European] comics, like Moebius, Jodorowsky, Manara, Corto Maltese. I went to Paris at some point and found all this stuff by Moebius and was blown away. What I like about books by Moebius and Manara, is that they seem very economically detailed.

CV: Well, thank you for taking the time to speak with us today. All the best.

Dawkins: Thanks. You too.

To find out more about Paloma Dawkins, check out her blog at http://www.palomadawkins.ca/film.php and visit http://retrofit.storenvy.com/products/17384942-summerland-digital-pdf-by-paloma-dawkins to purchase your copy of ‘Summerland’ today.