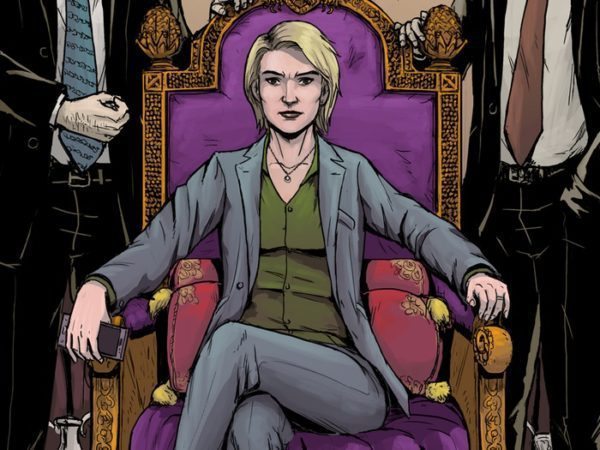 Jamie Me is one of the up-and-coming talents in the comics world today. First entering the scene with his awesome and informative #ComicBookHour, Jamie has built up quite a fanbase. Recently, Jamie released his first comic, QUEEN, to all around positive reviews. We had the opportunity to interview Jamie about his new comic and asked about his inspirations, his advice to new artists, and what is next for the burgeoning comic creator.

ComicsVerse: How and when did you first become interested in the comix medium?

Jamie Me: You know I’d say it was anime that first got me interested in comics. I read Sonic as a kid, but what really got me into comic books was watching anime. Stay with me. So what happens at times is you watch an anime, and it ends on a cliffhanger, but the story isn’t over: it’s just ran out of material. The material is Japanese comics called manga. You can then continue the story by reading the original source material (manga). I did that with Bleach and titles like Soul Eater, but then I found myself expanding to other titles.

CV: Was being a comic creator something you always aspired to do, or something that developed with time?

JM: I certainly didn’t set out to be a comic creator. I think that would be weird. You see a lot of failed TV writers try to get into comics looking to make the next Walking Dead, and they just lack the passion to create true comic experiences. I started out as a reader staying up until 4:00am reading Naruto, and then eventually expanding to Western comics, buying everything that looked good in a comic shop. Hell, I read anything comic-related. Korean manhwa is another interesting medium that I’ve taken to. I’ve always thought of stories too, and I have a notebook from ten years ago that has an entire world written in it. I should probably look at that again, honestly. One day I decided that I wanted to make comics myself, and so I started this journey. I like to get involved in any way I can, and I think that, in many ways, the people I work with are also like teachers. I’ve learned so much from the Callahan’s (START AGAIN/QUEEN) and Gita’s (QUEEN) of the world.

JM: It’s tough to answer, but politics always played a part, but it didn’t necessarily directly play out within the government. One of the original drafts is actually hinted at somewhere in the comic… honestly, tons of stuff is hidden within the comic and part of the fun is finding these little hints and clues. The scary thing about QUEEN is that I have literally dozens of versions that were explored before this point. It’s a very complex story, and it takes a ton of time to put together. The thing is, when it came together and Emily became my protagonist it became this monster in my mind. I became fascinated with this character that was so close to what she wanted but plagued by a deep suspicion of her own government. I think we all have this sickening feeling in life that behind closed doors people are making horrific decisions on our behalf, and they aren’t necessarily in our best interests.

READ: Our previous interview with Jamie about #ComicBookHour!

CV: With the British government in such a state of controversy, with the Brexit vote and Prime Minister David Cameron stepping down, was QUEEN a case of perfect timing? Or were you monitoring the state of affairs in Britain when writing and saw the way things were headed?

JM: I follow politics, and in the run-up to QUEEN I was engaged as much as possible. I’d debate politics as if it was from the perspective of my characters, and I had the Prime Minister’s Questions on loop in the background as I worked. It was a crazy time, and everything was planned and executed in a methodical manner. The comic went to Kickstarter on the election day, and it was ready for people to read on the 5th of November. I love that kind of stuff. If I had my way I’d release stuff only on important historical days, but then I’d be waiting around a lot!

CV: With your character of Emily Green, who were your influences when creating her? Did you use other British Prime Ministers to model her, such as Margaret Thatcher? Or was she a character that organically formed while creating your story of power in government?

JM: One day, I just had this idea of a Deputy Prime Minister really unhappy with her job and the party she was in, and it just spiraled out of control. Emily quickly formed, and she fascinated me. I modeled her on what a real-world British politician could look like, and realism is a huge theme for the entire comic. Bernadinus Gita is an exceptional talent when it comes to crafting original characters. He goes above and beyond expectation. Everything in QUEEN is inspired by the real Britain, but with an alternate take on it. I like to leave people to interpret my work however they like. When people tell me things about what they read into certain parts it’s an amazing feeling. I’d never want to take away their version either. I miss the old school games where you crafted how a character sounded in your head, named it and then it became yours in a way. I want people reading to make their own minds up about characters and the plot in my stories. You’ll never see me spoiling that for people.

CV: What was the process like, getting QUEEN from idea to paper to published?

JM: It was long, and emotional to say the least. I cried my eyes out the moment it sank in that I’d got my first “win” in the comic industry, getting funded on Kickstarter, and QUEEN will always hold a special place for me. It means tons to me to see the critical response, that people enjoy reading it and the fascination with Emily. She’s special to me, and I get the feeling that she intrigues people. That’s the ultimate goal for any creator. For people to want to know more. To be curious, and I feel like I have that. The work is far from over though. We need to go back and do it all again, and one day we’ll have to find a home for the comic. I have a lot of options available to me, and not all of them are conventional. Wait and see.

CV: If you have any advice for first time comic writers/artists/publishers, what would it be? What would you avoid doing next time, and what are you glad that you did do during the process?

JM: Don’t rush. I see so many people at the start of their journey talking about submitting to Image, and, yeah, maybe it does happen, but honestly? Probably not. These big companies are only after people with a body of work, and it makes sense from their end to go with people who have a history of completed works. Learning your craft is important, and that takes time. I’m a submission wrestler, and you get taught that “the basics are the advanced techniques”, and I think that is true for comic writers too. You need to learn the building blocks of comics. You are like a project manager most of the time, and that means making sure you can quality control pencils, inks, flats, colours, lettering and so much more. That said, if a company were smart enough to see how on fire British politics is right now… publishing a comic about them wouldn’t be a bad idea.

What would I avoid? I’d avoid checking Kickstarter every hour of the day. Seriously, most people do this, and it’s not healthy. You need to get your mind ready for crowdfunding. If you go in too anxious it messes with your mind. I was getting up in the middle of the night scared to death I was going to fail, and in all honesty, that’s just silly. Failing isn’t nice, but if it happens it happens. Own it, and then try again with what you’ve learned from your mistakes.

JM: Marketing. It’s called the “new art form” by some, and I tend to agree. In this decade getting people to give a sh*t is hard, and you have to be better than good. You have to be great. One of the obstacles I faced is that “politics” is such a potent theme. Some people hate it with a great passion, and they are exactly the people that should be reading QUEEN. So the challenge is finding the best way to reach these people. That’s the same challenge every comic creator has. You have to get people to buy a ticket to your show, and that’s hard when the competition is old as f**k with unlimited funding. The challenge excites me in all honesty. #ComicBookHour proves every single week, by drawing over a million impressions per event, that we can hang with the “Big Three.”

READ: Our analysis of ANIMOSITY #1!

The most rewarding? Getting solid review scores after getting told I’d be lucky if five people read QUEEN. A lot of people will try to put fear into your mind as a creator, but you have to learn the difference between those trying to help you, and those trying to stop your progression. There are snakes in the grass in all industries, and comics are no different.

JM: Somebody has done their research to mention SUBMIT. I know you [guys] like MMA, so you’ll really like that when myself and Havana (Nguyen) create it. She’s just finishing up a rather impressive run on Kickstarter with Kamikaze. Those guys (Havana Nguyen, Alan and Carrie Tupper) put on a hell of a campaign, and that comic won a Glyph Award too. So it’s quite the honour to get an opportunity to work with a member of that team. I learn stuff from everyone I work with, so it’ll be a great experience.

In terms of what is literally next… it’s QUEEN #2. We’ve got the team back together with me, Bernard Gita and Sean Callahan. The inks are already getting produced too, so before the end of the year, the plan is to go back to Kickstarter. I honestly can’t wait to see how people react to it. I read what everyone says about it, and I just smile. This is the kind of comic that people are going to read 2-3 times eventually. Nothing is ever what it seems in real politics, and QUEEN emulates the real world.

START AGAIN, if all goes well, will be released in the next month. Maybe you guys can take a look at it. It’s British as f*ck, so it’ll be interesting to see how people react to it. I’ll say this… not many publishers on the planet would let me publish some of the pages. Thanks again for the interview too. It’s great as an indie creator to get the opportunity to speak on the bigger sites, and I hope to return one day!