IMMORTAL BROTHERS: THE TALE OF THE GREEN KNIGHT #1 is a light and fun detour from the usual Valiant Superhero Universe. This comic features a retelling of the Arthurian Green Knight story with a splash of personality from familiar characters. The writing from Fred Van Lente and art from Cary Nord are great, but as a whole, the comic seems like a wasted opportunity to do something truly creative and outside the lines. This book is a tribute to Barry Windsor Smith’s classic ARCHER & ARMSTRONG/ETERNAL WARRIOR #8, and in that regard, it excels. However, as an interesting modern spin on The Knights of the Round Table, it is good, not great. Every aspect of the comic is entertaining and very well executed, but it is slightly less than the sum of its parts.

READ: We love Valiant! Check out 6 Valiant titles that we’re sure you’ll love, too!

The most interesting aspect of this issue is its framing device. The story goes full meta and lovingly rips off THE PRINCESS BRIDE. Valiant’s flagship hero, Faith, is sick, and her boyfriend, Archer, is going full on Peter Falk by reading her the classic Green Knight story in bed. Like THE PRINCESS BRIDE’s story-within-a-story, the teller’s personality seeps into the details. Midway through a proper medieval-sounding sentence, you will hear twitches of Archer’s southern twang. Van Lente hilariously melds the classic tale with the current Valiant Universe characters to make a nice game of  “I spy” featuring modern concepts squeezed into the Arthurian legend. Van Lente balances between servicing the Green Knight story and also giving Valiant fans enough Easter eggs in a way that is not overly hokey. Faith references Dungeons and Dragons in the story, and medieval panels feature anachronistic technology. Yet Van Lente never overdoes it with these intrusions and the meat of the story is a straightforward Arthurian quest. 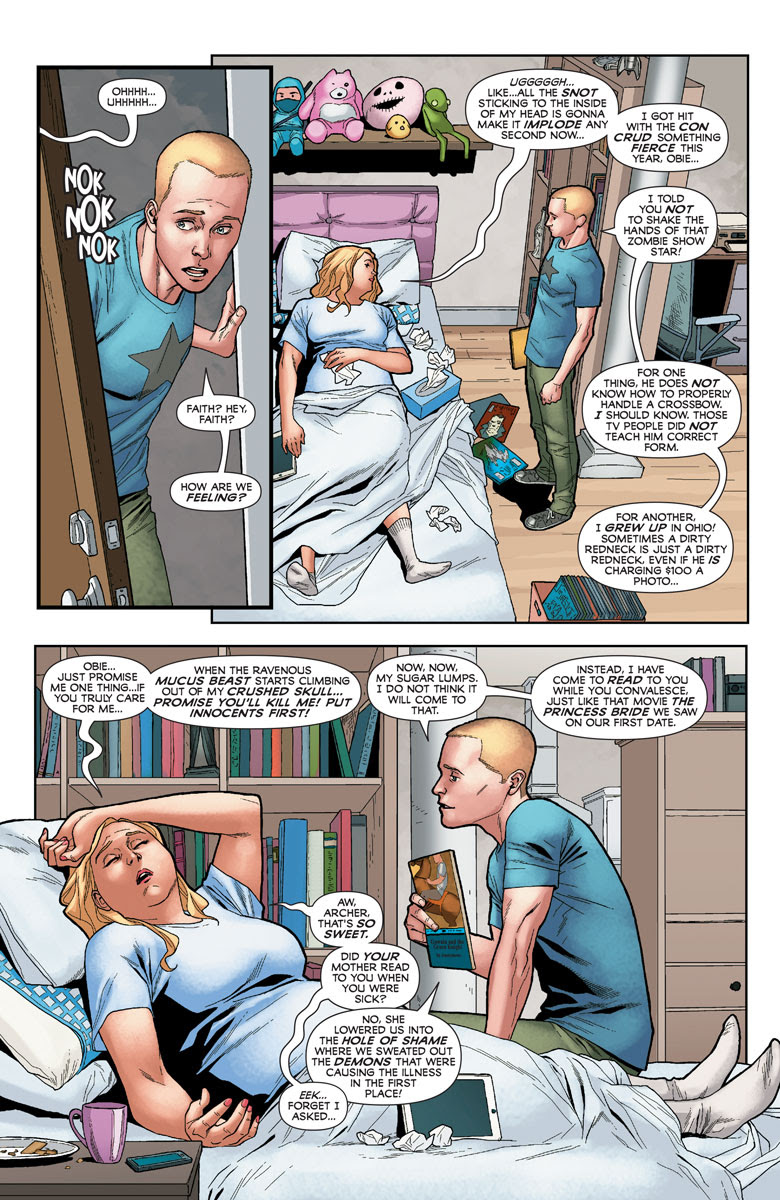 Filling in for the normal King Arthur cast are the Valiant mainstays: Archer & Armstrong, the Eternal Warrior, and Ivar the Timewalker. Despite the modern cast and references, Van Lente does a superb job faithfully retelling the classic Sir Gawain and the Green Knight story. In the short page length, IMMORTAL BROTHERS: THE TALE OF THE GREEN KNIGHT #1 tightly rehashes the beloved story. Like in the famous tale, The Green Knight challenges Sir Gilad to a head-chopping contest. Gilad is then tasked with defeating the ghostly and immortal Green Knight one year later. The dialogue is grandiose and quest-like, with all the “hear ye’s” one could ask for. Van Lente’s pacing is excellent, and the story never seems rushed. This is a complete and satisfying beginning-middle-end adventure comic. 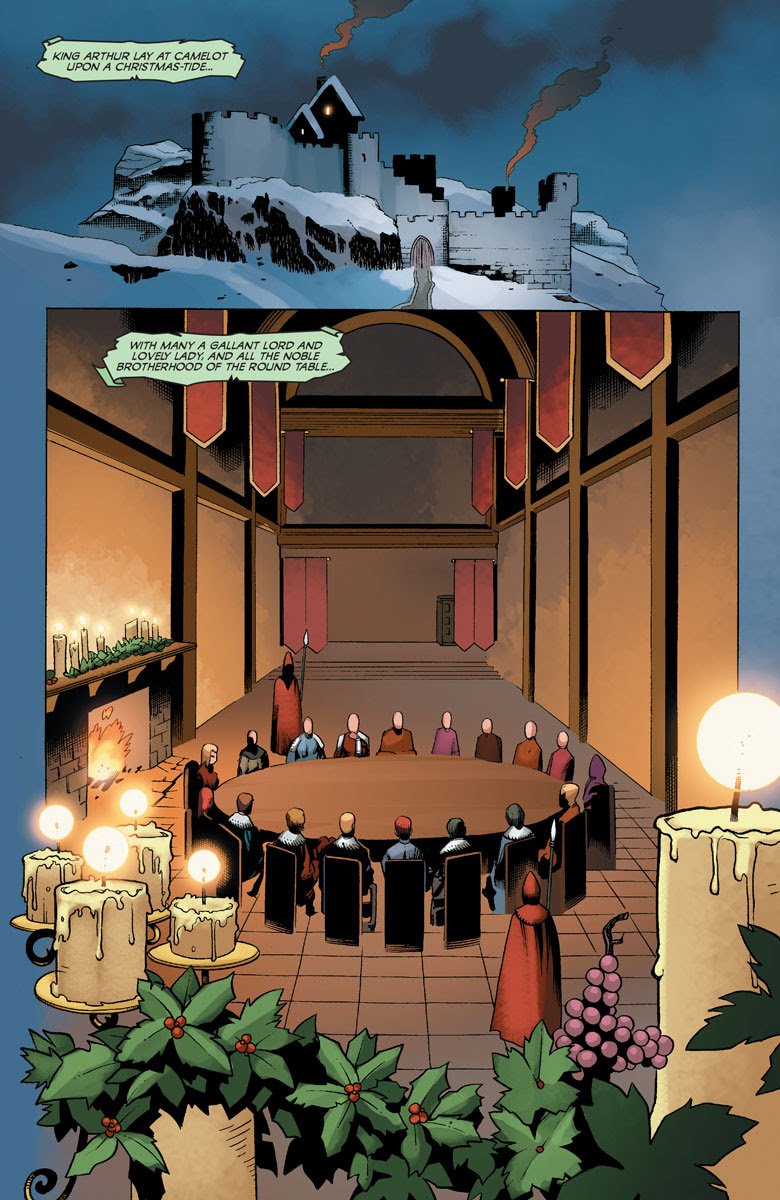 I would have liked to see Van Lente lean in a little further towards this being a “Valiant-Arthurian Story” as opposed to this being a retelling of the classic story. For example, Marvel’s depiction of Asgard (especially Jack Kirby’s renditions) really pulled apart the most distinctive aspects of the myth and reworked them into something fresh. IMMORTAL BROTHERS: THE TALE OF THE GREEN KNIGHT #1, while quirky and interesting, just seemed like a missed opportunity to really throw a curveball and Valiant–ize the Knights of the Round Table. The framing device is just interesting enough to keep your attention, but in reality, this story did not need to be set in the Valiant Universe. It’s not enough to make this comic bad, but it does leave something to be desired. In terms of chopping up the King Arthur story, IMMORTAL BROTHERS: THE TALE OF THE GREEN KNIGHT #1 scratches the surface, but I would have preferred a more daring dive. 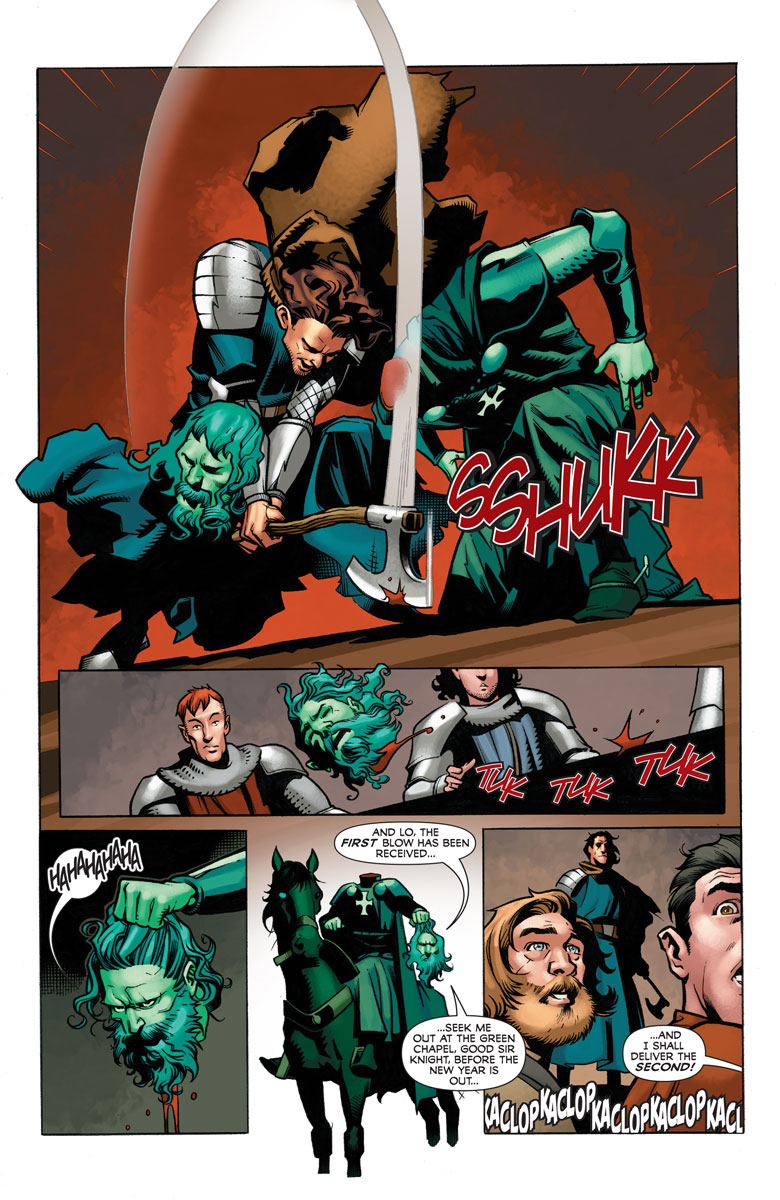 Nord’s art is completely solid throughout the entire issue. He does a great job capturing the medieval setting and bringing the well-known Valiant characters into this new universe. Nord maintains a modern comic style (cartoonish faces, dramatic poses, significant foreshortening) that really hammers in the point that this is a Valiant Universe story taking place in medieval times. I would have liked to see him go a little spookier with the Green Knight though. He is a great artist, and it seemed like a great chance for him to go a little gruesome with the character design.

If you are looking for a fun one-shot that will show you a different side of the Valiant Universe, pick up IMMORTAL BROTHERS: THE TALE OF THE GREEN KNIGHT #1. While not every aspect of the issue is perfect, it is a great standalone Knights of the Round Table adaptation with just enough Valiant-spice thrown in.